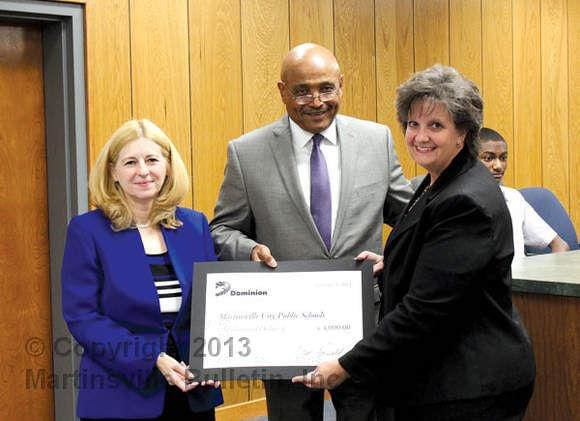 In this photo from 2013, Gianna Clark (right), Dominion Foundation vice president of customer service operations, presents a ceremonial $4,000 grant to Martinsville School Board Chairman Robert Williams (center) and Superintendent Pam Heath during a city school board meeting. Williams died Monday at the age of 75.

In this photo from 2009, Martinsville High School Principal Tom Fitzgibbons (left) talks to city officials  during a tour of the school. Among those pictured (from left in the foreground) are school board member Robert Williams, city council member Gene Teague and school Superintendent Scott Kizner. Williams died Monday at the age of 75.

In this photo from 2013, Gianna Clark (right), Dominion Foundation vice president of customer service operations, presents a ceremonial $4,000 grant to Martinsville School Board Chairman Robert Williams (center) and Superintendent Pam Heath during a city school board meeting. Williams died Monday at the age of 75.

In this photo from 2009, Martinsville High School Principal Tom Fitzgibbons (left) talks to city officials  during a tour of the school. Among those pictured (from left in the foreground) are school board member Robert Williams, city council member Gene Teague and school Superintendent Scott Kizner. Williams died Monday at the age of 75.

Robert “Butch” Williams, a former Martinsville City Schools board chair and a winner of the Michael Cannaday Award, died on Monday. He was 75.

Williams “served on most of the boards around Martinsville,” said his longtime friend, dentist Dr. Jim Wilson. “He’s been invested in Martinsville.”

Williams practiced law in Williams, Luck & Williams, in offices on Jones Street, across from the former Henry County Courthouse.

A Danville native, Williams received his undergraduate degree from Howard University and was one of the first black students to be graduated from the University of Virginia School of Law. He taught at Duke University, N.C. Central University and Boston University before settling down in Martinsville.

Although he had grand opportunities in big cities, Williams “wanted to come back to a small town,” Wilson said.

“He came from a family of professional people, which is a little bit exceptional in the black community” before and during the time of the Civil Rights movement, Wilson said.

Williams’ father was an attorney, and his mother was a teacher. His uncle, Clyde Williams, taught school and also was a principal of Martinsville High School, and another uncle was a community doctor – “he delivered me as a baby,” Wilson said.

It was Clyde Williams who introduced the two through a note, Wilson said. At the time, Wilson was living in Chicago, and Butch Williams had to go there on a trip. Following his uncle’s tip and using his note of introduction, Williams looked up Wilson.

“We just hit it off,” Wilson said. “We liked the same things,” traveled together both in and out of the country, went jogging together, and ended up living on the same road in Martinsville.

Williams and his wife, Patricia Williams, have a son, Robert “Robbie” Williams Jr., a corporate lawyer in New York, and a daughter, Jamie Williams of Tucson, Ariz., a physician, Wilson said.

In 2016 Williams won the then-fifth-annual Michael Cannaday Award, given by the Martinsville-Henry County Bar Association. The award recognizes a person in the legal community who contributes to the success of the administration of justice and embodies the spirit of service, good humor and outgoing personality exemplified by Cannaday, who died on Sept. 26, 2015. When Williams received the award, Andy Hall, then the president of the bar association, said, “Robert has been a champion of civil rights.”

In a related interview with the Bulletin, Hall called Williams “an outstanding trial attorney … brilliant in front of a jury.”

Williams always was physically active, Wilson said. He went to the Y at 6 every morning to swim for an hour, and every other day he jogged 3 miles on a treadmill.

“I wasn’t ready for this,” Wilson said. “For someone that active,” the news of his passing came as a surprise.

Williams also “was an extremely active” member of Grace Presbyterian Church, said its pastor, the Rev. Kelvin Perry. A church elder, Williams served on the church’s governing body, the board of sessions.

Perry’s relationship with Williams extended far beyond church. Now employed by Danville’s Office of Economic Development, Perry met Williams in 1993 when Williams, as a member of Imperial Savings and Loan’s board of directors, hired Perry. Half a year later, when Williams chaired that board, Perry was made president of the savings and loan.

Perry had come from out of town for the job, and Williams introduced him to people in town and invited him to a variety of events, taking many steps to help the Perry family feel welcomed and among friends, he said.

Williams was “full of personality and very charming and very sophisticated, an all-around good person,” said his brother, Jerry Williams, an attorney in Danville.

The Williams brothers, plus sister Trudy Williams, an attorney, and brother Carl Williams, a sports editor, came from a professional family: Their father was a lawyer, and their mother was a teacher, and other relatives also were professionals. Their parents “were both sticklers for education and especially for blacks to be educated. It was just a given that you were going to college,” Jerry Williams said.

The Williams siblings were inspired by their father’s professionally independent lifestyle, Williams said.

“He didn’t have to punch the clock. He was able to work for himself, be his own boss. That was something we all admired.”

Another part of their heritage, Williams said, was to “be active and do things” in the community.

Their father, who started practicing law in 1946, “was very active in civil rights,” he said. “Most black lawyers were in the civil rights struggle, and we grew up around that.”

One of the cases with which the brothers saw their father involved was the “Martinsville Seven,” during its appeal phase. The Martinsville Seven were seven black men who were convicted and executed in 1951 for the rape of a white women.

“Civil rights lawyers around the state saw what happened and tried to overturn what happened,” he said. Their efforts were to no avail.

Said Perry: “It is a really huge loss for our church because he was well-respected, well-revered and made so many contributions in so many ways.”

Funeral plans have not been announced yet, although Wilson said he thought something was in the works for Saturday with Hairston Funeral Home.