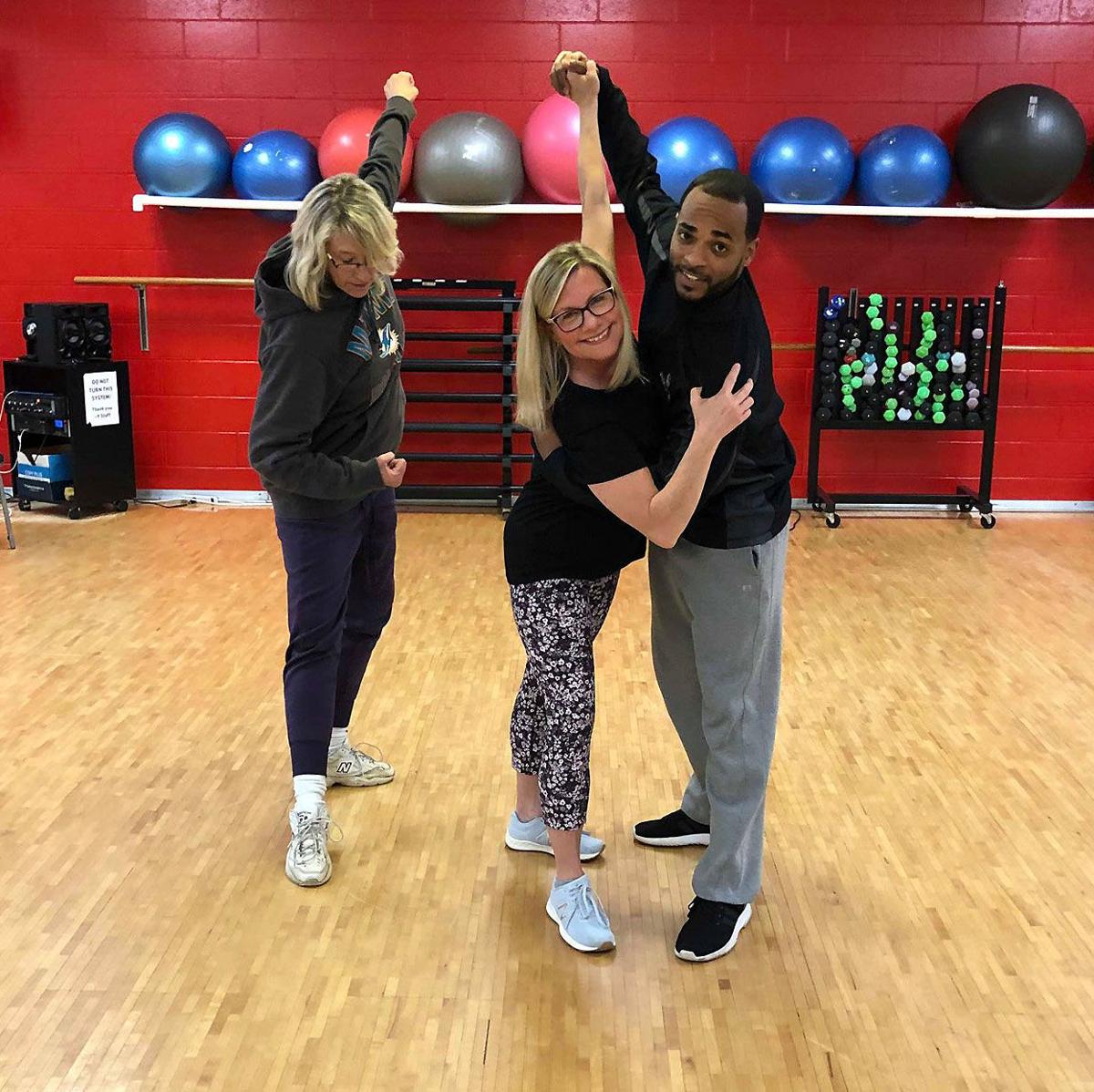 Choreographer Catherine Rodenbough (from left) coaches Ginger Gardner and Hasan Davis, who are dancing the quick step for Piedmont Arts' Dancing for the Arts. 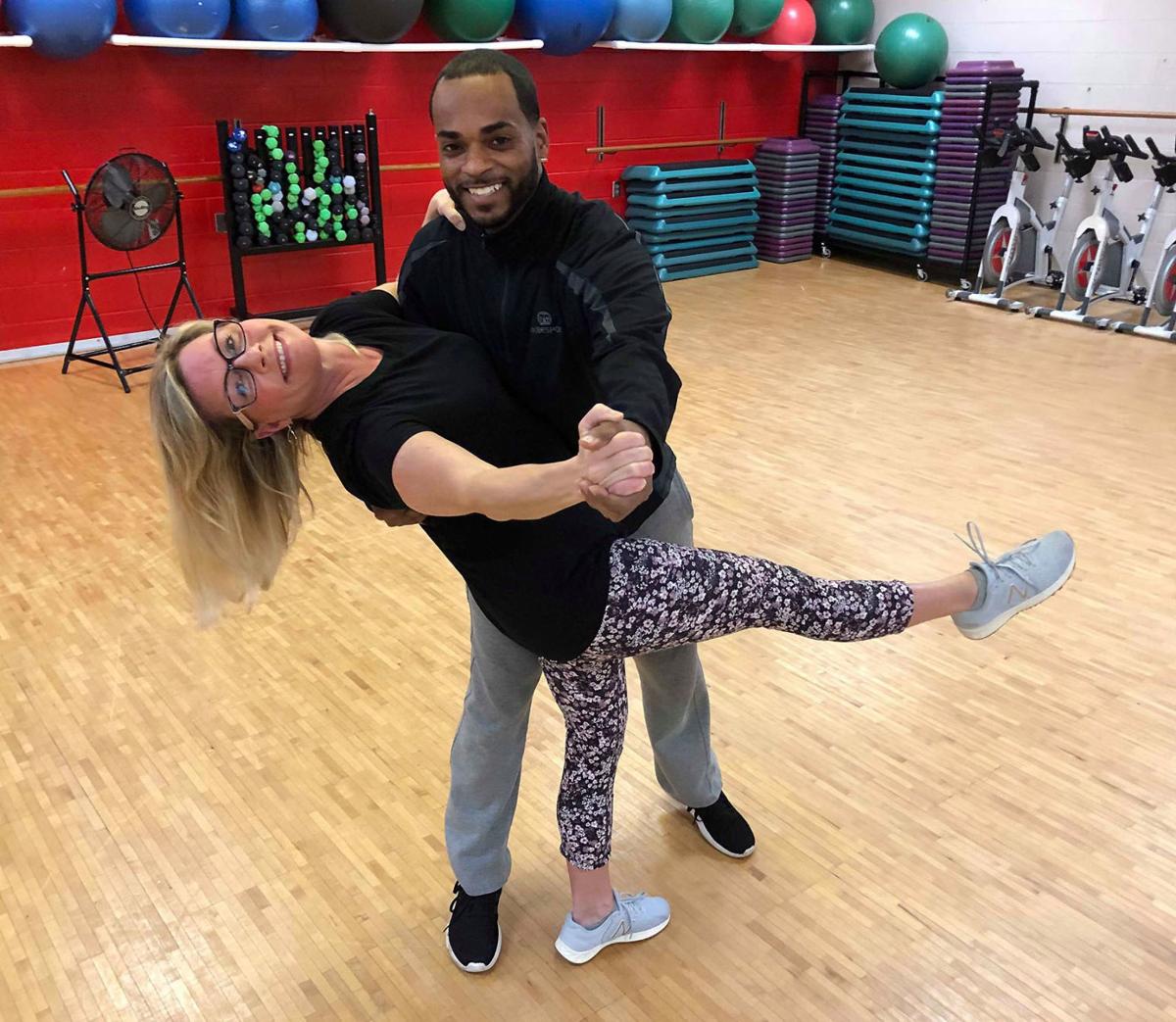 Hasan Davis dips Ginger Gardner as they dance the quick step, one of two styles of dancing they will perform for Dancing for the Arts on April 4. 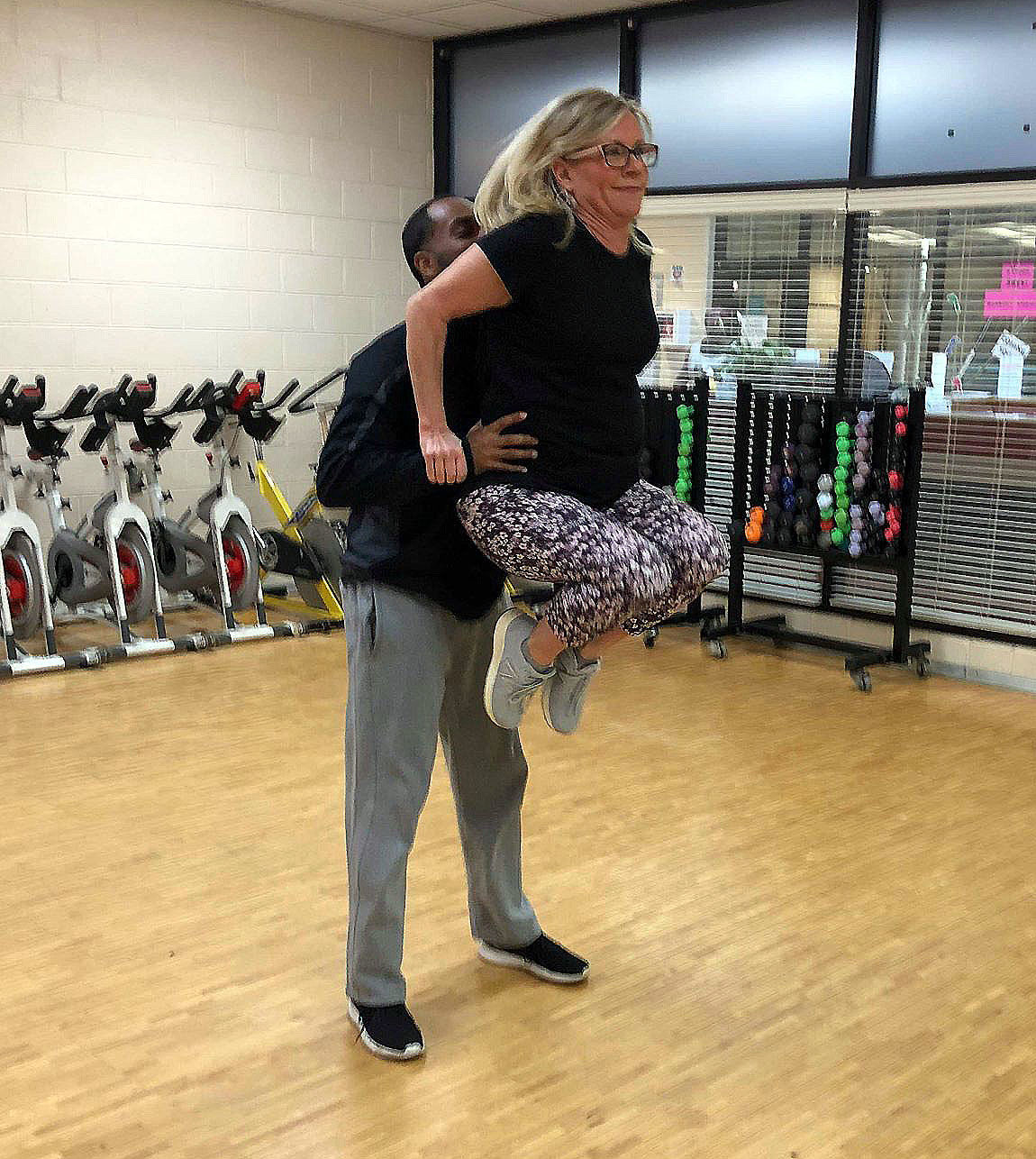 Choreographer Catherine Rodenbough (from left) coaches Ginger Gardner and Hasan Davis, who are dancing the quick step for Piedmont Arts' Dancing for the Arts.

Hasan Davis dips Ginger Gardner as they dance the quick step, one of two styles of dancing they will perform for Dancing for the Arts on April 4.

Hasan Davis said that besides parties in college, he hasn’t done much dancing. Ginger Gardner’s dancing experience is something similar.

Yet they are quickstepping their way across the exercise room at the YMCA, practicing for the evening when they will dance in front of 1,000 people.

Gardner and Davis comprise one of eight couples performing in Piedmont Arts’ fundraising dance competition Dancing for the Arts, which will be April 4 at Martinsville High School.

“It’s going good so far,” Davis said. “They say laughter is the best medicine, and I’ve been doing that here a lot lately.”

Davis, who lives in Martinsville, is a graduate of Radford University with a bachelor’s degree in sports administration and also an Air Force veteran with an associate degree in hospitality/fitness management from the Community College of the Air Force.

He runs a public relations service, Peripheral Vision Connections, teaches swimming at the YMCA, works at Hairston Funeral Home and Hylton’s Wood Cooking Grill, is involved with VA Bespoke and is on the boards of directors of Piedmont Arts and the YMCA.

Gardner and her husband of 23 years, Martin Gardner, have two sons, Jack, 20, a student at James Madison University, and Will, 17, a student at Magna Vista High School. The couple lives in Martinsville, and their household includes “one of the greatest loves of my life,” Gardner said – “my Great Dane, Cooper.”

Cooper “is full of personality, like having three dogs in one,” she said. Although he’s huge, he thinks he’s a lapdog, and he’s goofy.

Gardner became a nurse when she was 41. She works in the Ambulatory Services department at Sovah Health.

The nursing started when her sons got older, and, she said, she felt she “needed something to do.” She took a class in anatomy and physiology at Patrick Henry Community College “and ended up loving it. It’s a good fit for me.”

Participating in Dancing for the Arts is giving Gardner her first formal training in dance, she said.

“I’m enjoying it. It’s fun,” she said, adding that it also has been physically demanding. She feels it wearing her out, whereas “Hasan doesn’t sweat or breathe” while dancing, she said chuckling.

Their choreographer, Catherine Rodenbough, is a Dancing for the Arts veteran. She was a long-time dancer with Ray Hollingsworth Dance Studio, starting with classes as a child, and competition in Ray and Cindy Hollingsworth’s advanced troupe. As the years went by, she went from dancer to behind the scenes, as a judge, backstage coordinator and emcee.

When she was in her early 20s, Rodenbough danced in amusement parks, including Carowinds in Charlotte, N.C.. Later in life, she has taught dance classes.

She is teaching the couple to dance the quickstep, a dance she coached at every Dancing for the Arts event except for one – “and that’s the hardest one to do.”

Gardner describes the quick step as a dance with “a lot of kicking and sliding and fast footwork. It’s hard but fun, very upbeat.”

Quickstep was developed in the 1920s, with origins in the Charleston combined with a slow foxtrot. It is fast, elegant and form-intensive.

The pair will dance quickstep to “Big and Bad” by Big Bad Voodoo Daddy.

Each couple in the dancing competition also dances a second dance of choice. Gardner and Davis will dance a jazzy-style routine to the 1980s hit “Just Got Paid” by Johnny Kemp.

“We went around the world and back trying to pick the song,” Rodenbough said.

“It will be a crowd-pleaser,” said Davis, with Rodenbough adding that “it might have a little hip hop to it.”

Overall, participating in Dancing for the Arts “is definitely a personal grown, something out of the comfort zone,” Davis said.

“You learn to trust your partner,” Rodenbough said.

Said Davis: “I think we’re both learning not to put limits on ourselves.”

Dancing for the Arts

VOTING: Like "Dancing with the Stars," 50% of each team's final score is tallied from votes and 50% is tallied from scores awarded by the judges during the contest. Each vote costs $1, and people can vote as often as they want. The dollar value doubles by joining Piedmont Arts, or renewing or upgrading a membership. Voting will be done through the day of the event on Piedmont Arts’ website, www.piedmontarts.org. Votes also will be taken during the event

Jennifer Bowles is in good hands with Dancing for the Arts – her partner, Justin Chandler, is an experienced dancer.