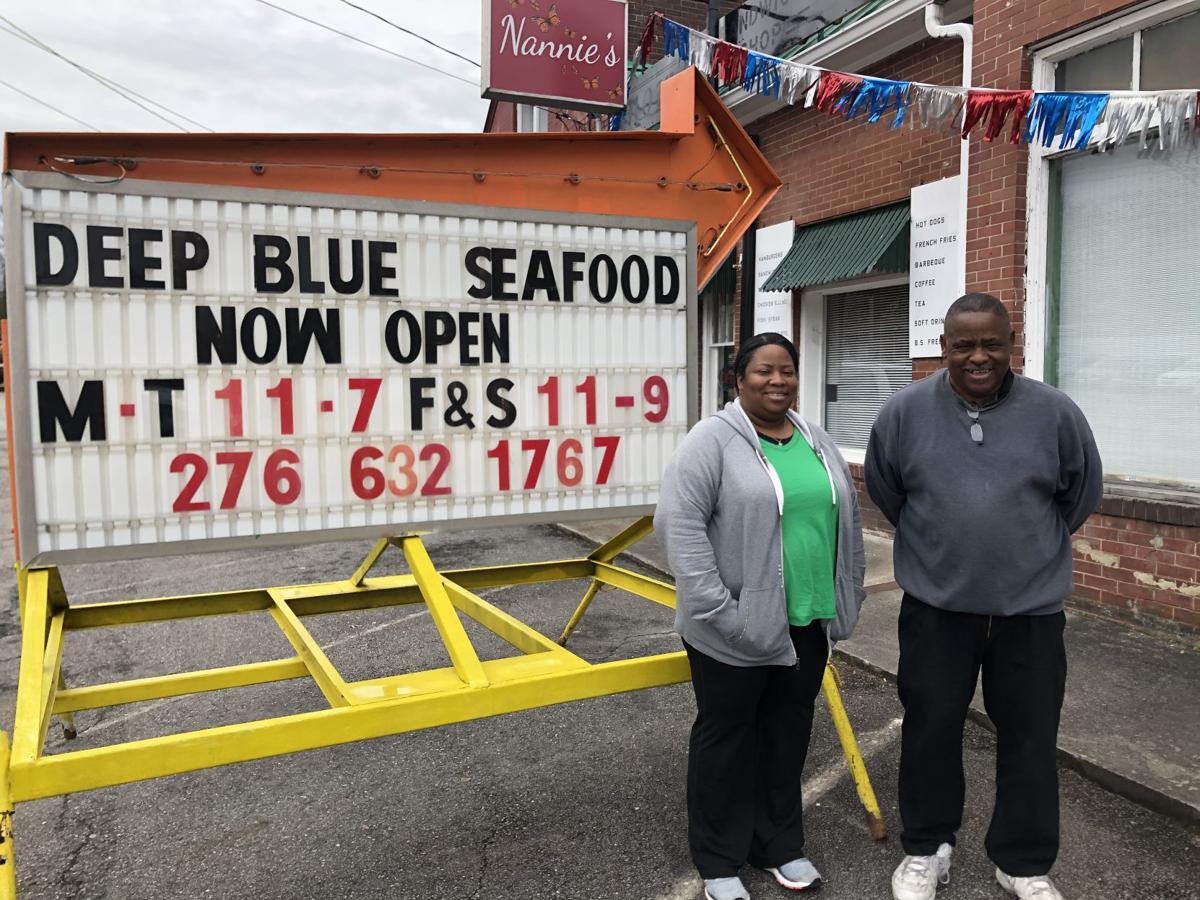 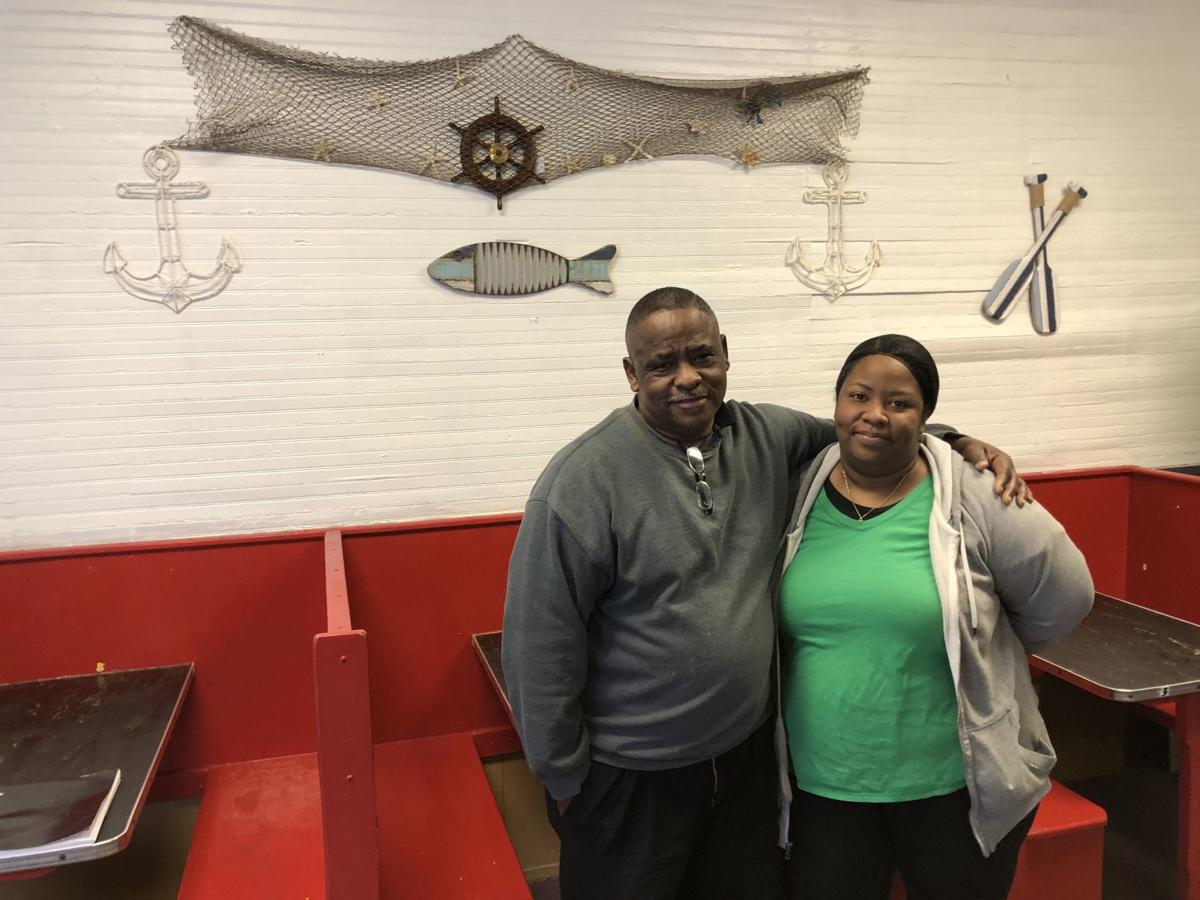 If there’s anything Douglas Hairston has learned in the restaurant business, it’s how to cook fish so that it’s just right. If there’s another — it’s to keep to predictably safe business hours.

Hairston and his daughter, Tiffany Jones, both of Martinsville, on Feb. 6 opened Deep Blue Seafood in the former Snow’s Sandwich Shop on Memorial Boulevard.

About 14 years ago he also operated a Deep Blue Seafood on Fayette Street for a couple of years. However, “we had some issues” back then, he said. “We were staying open late night and had some problems” that “turned into a mess.”

That restaurant was open until 3 or 4 each morning, but “the only thing you have in Martinsville late night is trouble,” he said.

Now it will be just from 11 a.m. to 7 p.m. that Deep Blue Seafood sells both prepared meals and fresh fish. The restaurant is open every day except Sundays.

Meals include fried shrimp, oysters, scallops and a variety of fish, including whiting, catfish and croaker. Hairston will be steaming seafood soon, he said, and he also plans to introduce a chicken-breast sandwich and bone-in dinners. Side dishes include coleslaw, french fries and hush puppies.

Deep Blue Seafood also “has all types of desserts,” Hairston said, including homemade red velvet cake and sweet potato pie: “You’re talking about some of the best desserts you’ve ever put in your mouth.”

Hairston also special-orders “just about any fish” his customer desires, both for cooked plates and to take home to cook themselves, he said. He places his orders on Fridays for fresh seafood he picks up on Wednesdays. Popular requests include croaker, porgies, red snapper and grouper — and alligator.

Hairston also has been detailing cars for 20 years, for the past eight at 13 Broad St., Wizard of Cars. He still owns that business, with people working for him.

Since his first Deep Blue Seafood, he has had a few little restaurants inside other businesses, such as the store in Irisburg and a convenience store on Va. 58, but “it wasn’t the same,” he said.

The former Snow’s facility “is right on the main drag,” he said, plus “has a lot of history.”

A few days ago, a man who looked to be older than 90 came in and told him his father used to bring him there when he young, he said.

The location isn’t the only tradition. Hairston’s cooking and business style are based on that at Mickey’s Seafood, which used to be on Market Street. His mother, the late Josephine Hairston, used to work there.

Reception at his new restaurant has been great, he said.

“The first couple of weeks we’ve been running around numb from being so tired trying to take care of everybody,” he said.

He said he likes working in the family business, which also involves his granddaughters, Jones’ daughters, Ariana Jones, 21, of Martinsville, and Teniah Jones, 18, a Magna Vista High School student.

His other daughter, Venetia Hairston, lives in Charlotte, N.C., with her two children, Nature, 12, and Tylek, 19.

At his first location on Fayette Street, “it took two years to get the business going good, and it took them 30 seconds to destroy it,” Hairston said.

That earlier Deep Blue Seafood “was about the only place you could get seafood at that time” of night, he said. However, “I’ve noticed in Martinsville any time a business stays open late, there are problems.”

In the decade-plus since he closed that restaurant, people had been asking him when he’s going to open it back up, he said.

They finally talked him into it. At the age of 62, though, he said, “I’m not going to make the mistakes I did before.”

“These youngsters who don’t have any respect for themselves are definitely not going to respect” a business owner, he said.

It wasn’t the neighborhood where the previous restaurant was that caused the trouble, he said, but rather the hours.

“People in the West End supported my business. It was people from outside locations” who caused problems, Hairston said.

Late-night customers at that place would “come in from clubs at the end of the night” and get into fights, he said.

Barry E. Hairston was shot inside the restaurant while he was waiting for an order at 1 a.m. on Sept. 30, 2007, according to Bulletin reports. He was hospitalized for six months before he died in March 2008 at the age of 40.

After the shootings, “I didn’t stay open too long after that,” Hairston said. “I said, ‘Enough is enough.’ I didn’t want to get hurt or killed. I didn’t want my kids to go through that.”

Now, however, at his second try at Deep Blue Seafood, “I think we’re going to do extremely well here.”

This story contains the correction of a date which originally was published incorrectly.