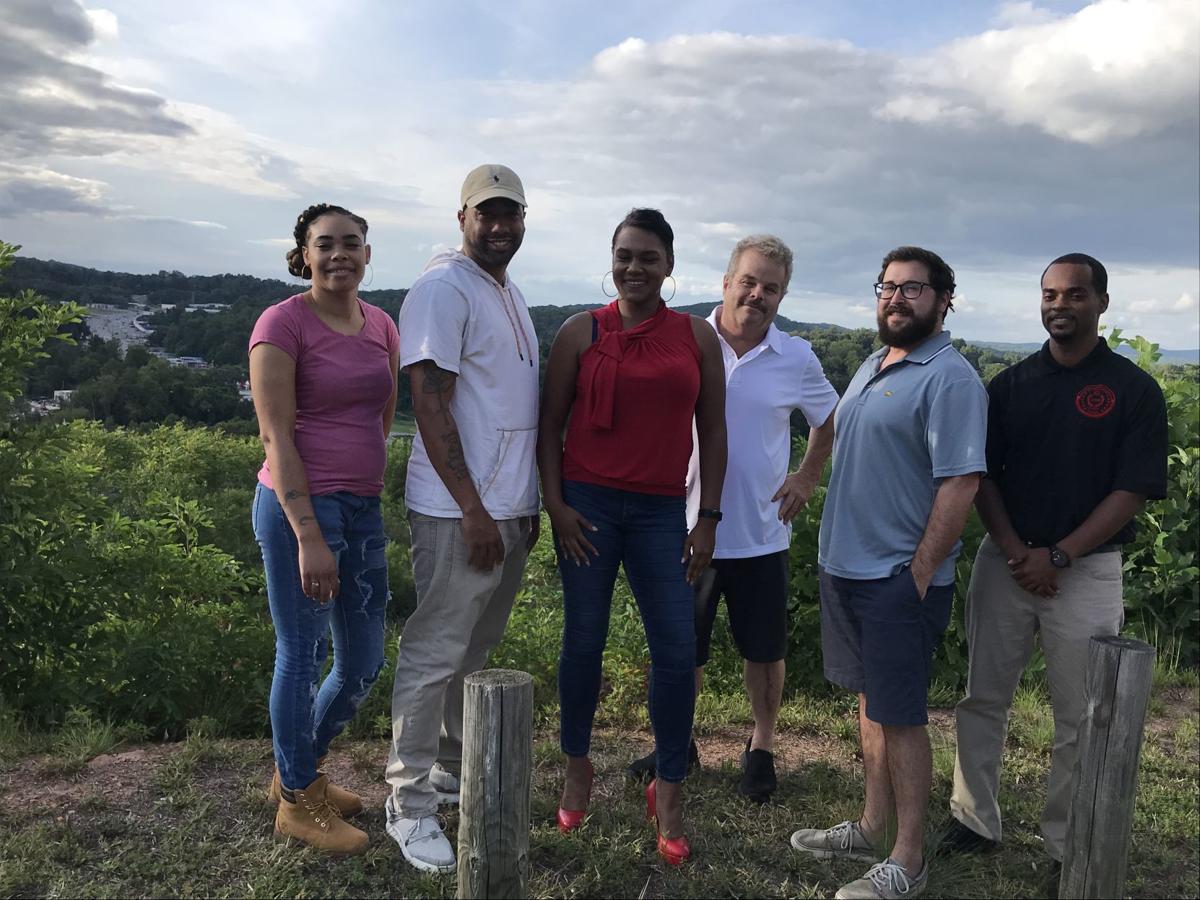 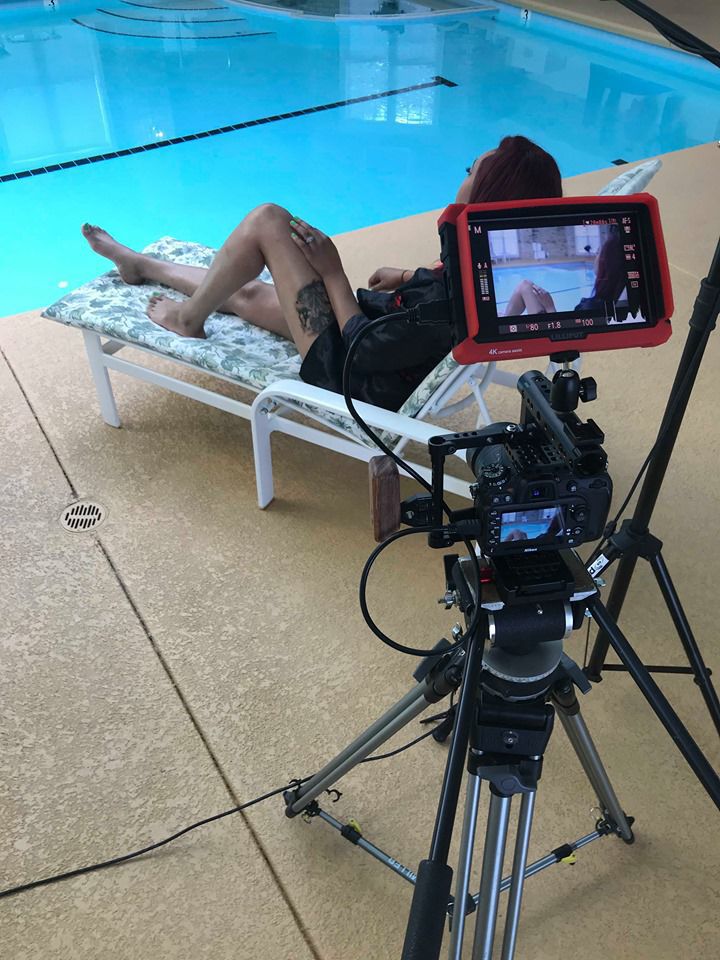 Elizabeth "E.J." Martin is filmed poolside at Somerset, the mansion in Horsepasture used as one of the sets of "Sell." 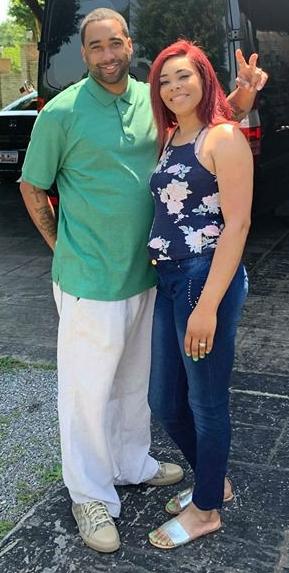 Andre Benton and Elizabeth "E.J." Martin take a break during the filming of "Sell," in which Benton plays Demetrius, a recently released felon trying to get back on his feet, and Martin plays Ayana, his supportive wife. 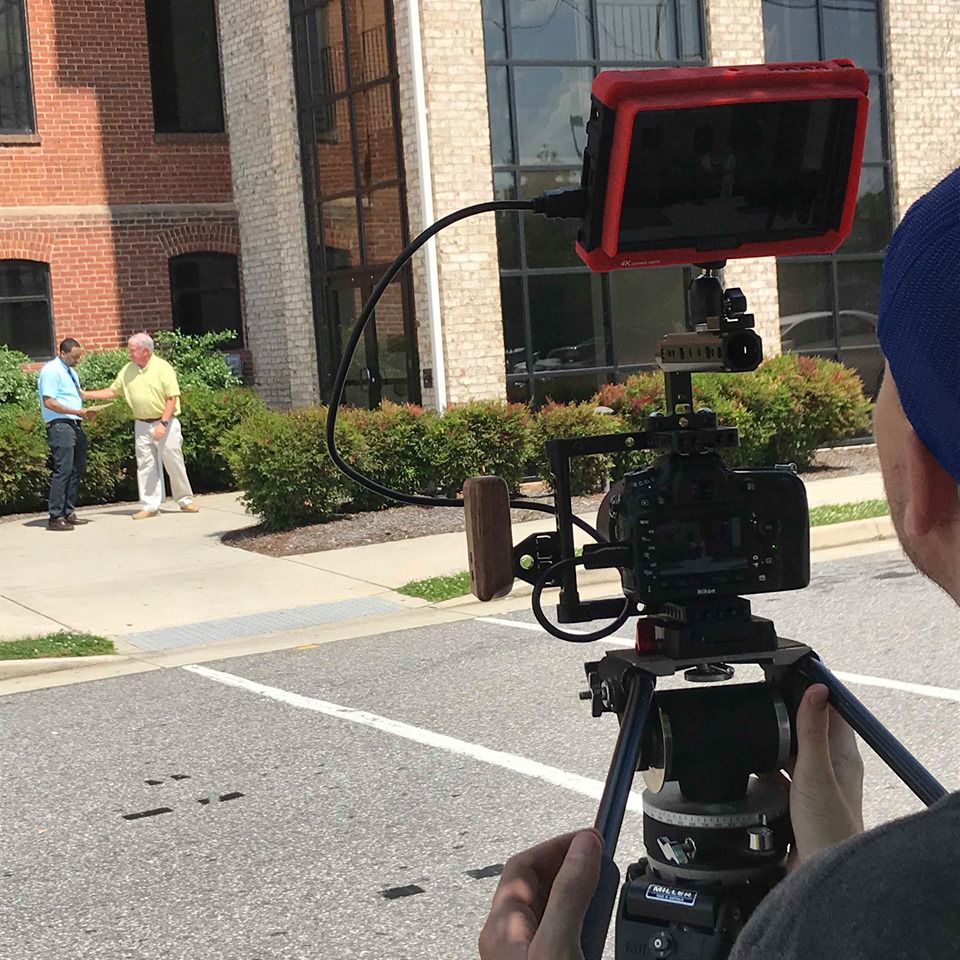 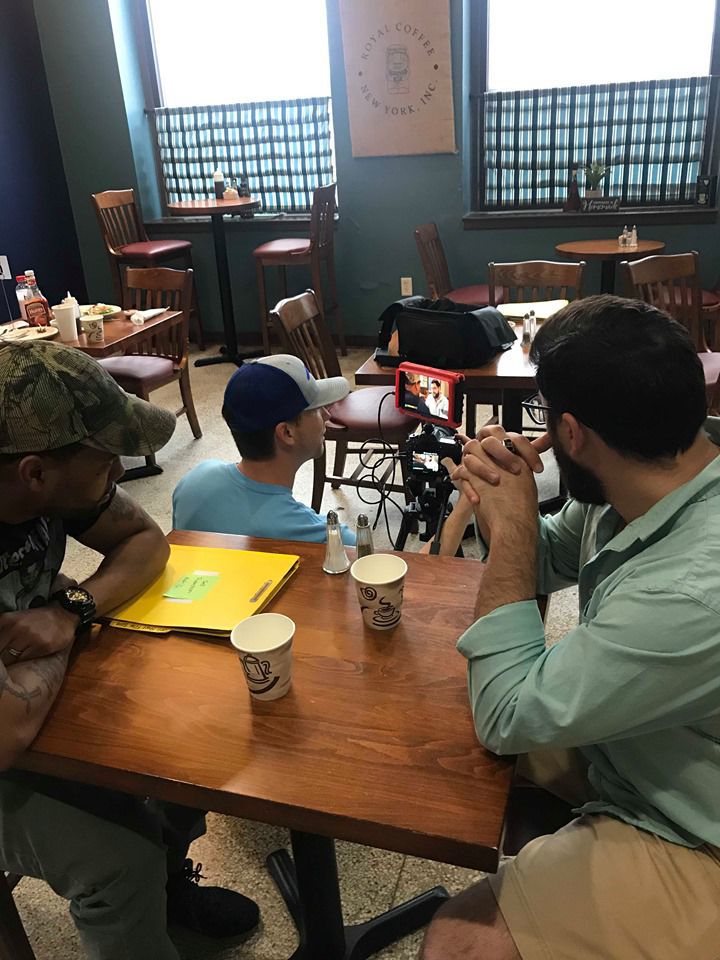 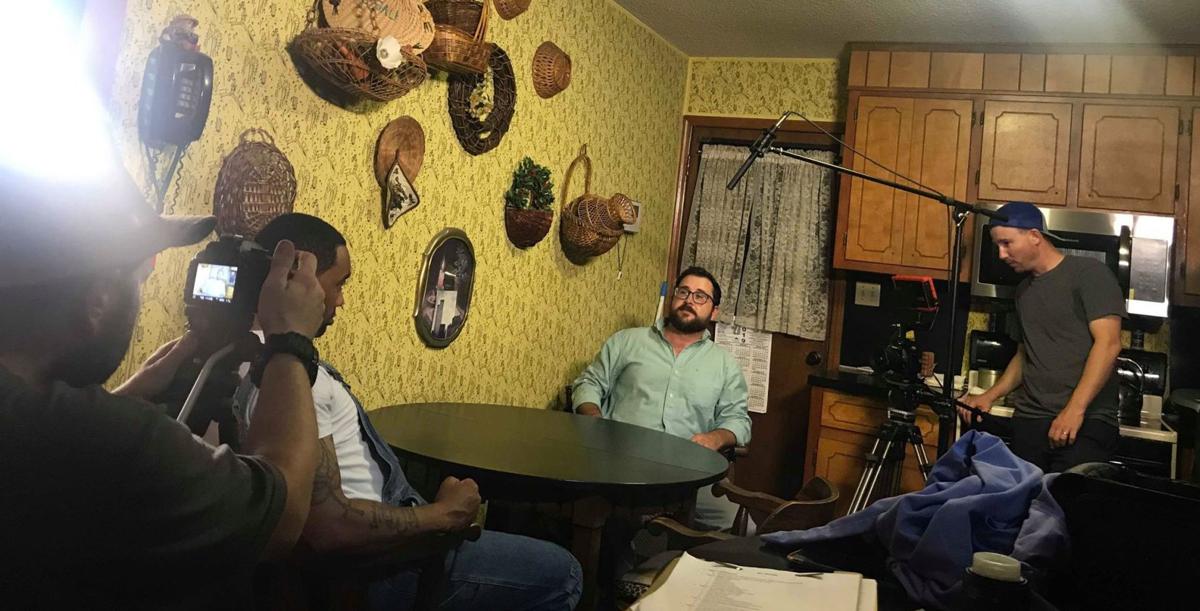 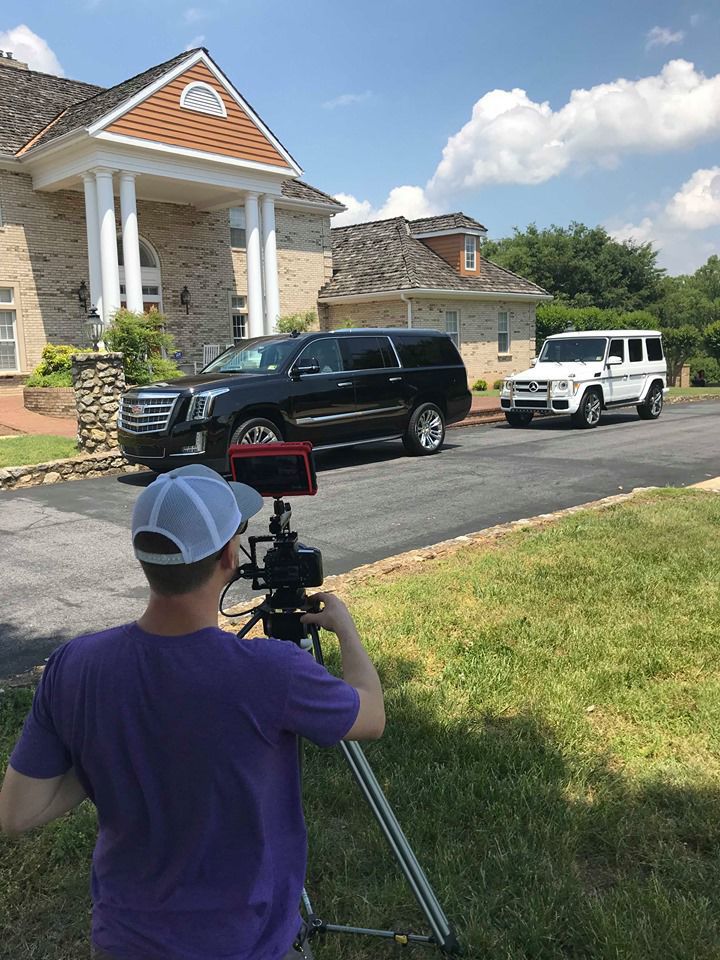 Chase Nappier films a scene for "Sell" at the Somerset mansion in Horsepasture. 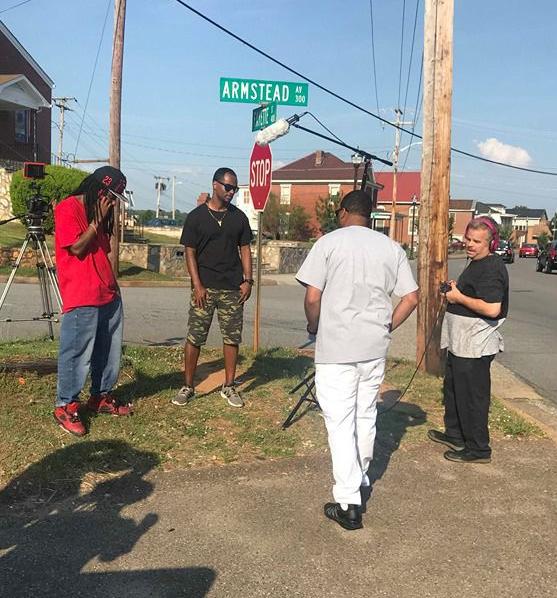 Scenes from the movie "Sell" were filmed around Martinsville and Henry County, including this one at the corner of Armstead and Fayette Streets.

Elizabeth "E.J." Martin is filmed poolside at Somerset, the mansion in Horsepasture used as one of the sets of "Sell."

Andre Benton and Elizabeth "E.J." Martin take a break during the filming of "Sell," in which Benton plays Demetrius, a recently released felon trying to get back on his feet, and Martin plays Ayana, his supportive wife.

Chase Nappier films a scene for "Sell" at the Somerset mansion in Horsepasture.

Scenes from the movie "Sell" were filmed around Martinsville and Henry County, including this one at the corner of Armstead and Fayette Streets.

A short movie made in Martinsville takes a hard look at life after incarceration – and a particular brand of hustle that’s unique to the modern age.

“Sell” is from Rudy’s Girl Media, aka Natalie Hodge. It’s about the hardships Demetrius (Andre “Smoov” Benton), a former drug dealer, goes through once he’s out of jail and labeled a felon. He puts his hustling skills – and network of drug dealers – to use to push the promising product of an entrepreneur (Conrade “Chase” Young), who’s on the brink of disaster.

Elizabeth “E.J.” Martin is Ayana, the wife who waited for Demetrius and still believes in him.

Hodge is the writer and executive producer. Chase Nappier is the director; producers are Hasan Davis, Chaka Stewart and Charles Roark. Mary-Elizabeth Sabo is the associate producer; Johnathan Herring is the camera operator; and Cameron D. Moore is a consultant.

Hodge, a Henry County native who has lived in New York and Los Angeles, has had experience on both sides of the camera. However, the community involvement and support with “Sell” “made it extra special” over other projects she has worked on, she said.

The idea started two years ago, when word got around about a television pilot Hodge had created, “Kelly’s Korner.” It was inspired by her father’s store in Leatherwood and though the show was set in New York City, “people assumed production was taking place in Martinsville,” Hodge said. “I started to think it would be cool to do something here.”

The theme came to her logically: As Hodge, the project director of Workforce Centers for the West Piedmont Region, and a friend, Terrence Glass of the Virginia Employment Commission, compare their experiences, they always notice the difficulties some people, especially formerly incarcerated persons, have getting work and into society, she said.

It seemed a worthwhile topic ideal for the screen — and one that could be tackled locally without funding.

The struggles of formerly incarcerated people affect nearly everyone, Hodge said. The purpose of the film is to inspire people, to “show what returning citizens have to deal with” and also to show how people can reinvent themselves.

When she started writing in March, Hodge said, the story flowed out easily. She kept Davis filled in on things from the start, “and before I knew it he was on the phone making things happen. It rolled,” she said.

Benton has “done skits here and there on Facebook, but I always wanted to do this type of acting,” he said.

Martin had modeled but not acted. However, both Samantha Koski and K.J. Harkness told Hodge that she would make a great Ayana. Hodge said that as soon as she saw Martin she agreed.

There is a great deal more to acting than most people realize, Martin said, as Benton and Young laughed and nodded in agreement. Looking at the TV is like, “Oh, I can do that. It seems easy — but it takes time,” she said.

However, the clear and detailed direction by Hodge and Davis helped considerably, Benton said.

Their many rehearsals also helped, both in the practice and in the evolution of the script, the group said.

Clear and detailed instructions in Hodge’s script made it easy to play the character, Young said. Scott, the entrepreneur, “had very big dreams. He’s found out that things are falling fast,” Young said about his character.

After several weeks of rehearsals, they filmed over a course of a few days in May.

All filming was Martinsville — with Martinsville, the city, being more than just a stand-in for a fictional town. Demetrius is released from the City Farm — Martinsville Jail. By the time life finally turns out well for Demetrius, he’s living in Somerset, the mansion in Horsepasture.

Thomas Warsham lent the use of his house for filming; scenes were recorded in Kafenio; Martinsville City Council member Danny Turner played a company manager at The Clocktower; and VA Bespoke provided the wardrobe, Hodge said.

With filming completed this past spring, attention was turned to making the website and the trailer.

Hodge said she is looking at a variety of options for distribution. The premiere will be local, probably at Hollywood Cinema and the Rives Theatre, in a couple of months. She also has contacts who may have a chance at distributing through outlets such as Amazon Prime, BET and Netflix, she said.

She has two or three other projects written, and it’s “just a matter of funding” to get them off the ground, Hodge said.

Roark, who runs the WGSR and WMCV Star News television stations and Hollywood Cinema, said about filmmaking: “We’ve always wanted to do it, and had the skills to do it,” and it went as well as he would have expected.

In fact, he said, “Sell” went so well for him that now he is creating “Over A Cat,” a film based on the real-life saga of his cat, who showed up one day at the movie theater.

“The thing that impressed me is Natalie has her act together, because I get this all the time,” said Roark, referring to people asking him to help make movies.

“If we focus, we can make this a great film town,” he said.

The screening of a short movie made in Martinsville has sparked a conversation about how formerly incarcerated persons can move back into society.