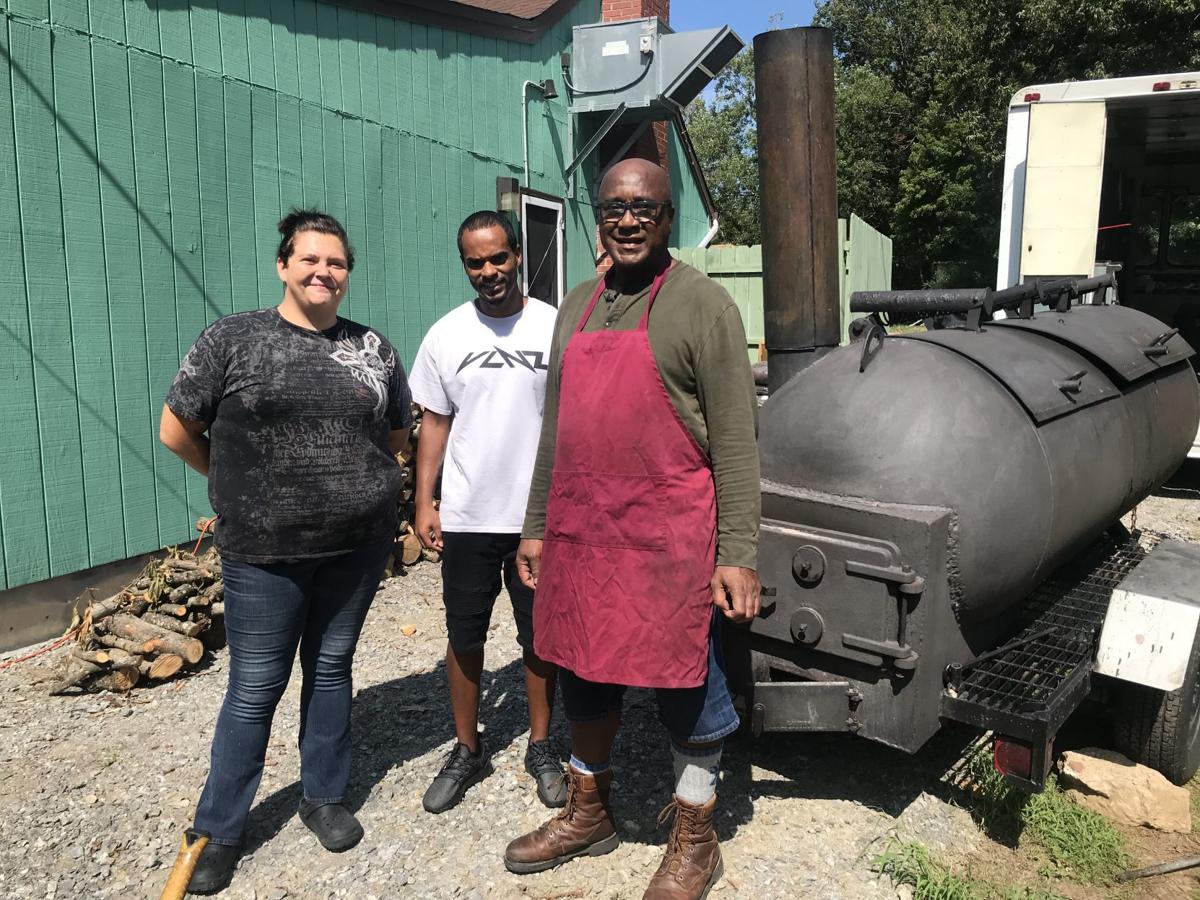 Ready for another day at Hylton's Wood Cooking Grill are Miranda Meadows (from left), Hasan Davis and proprietor Joe Hylton. 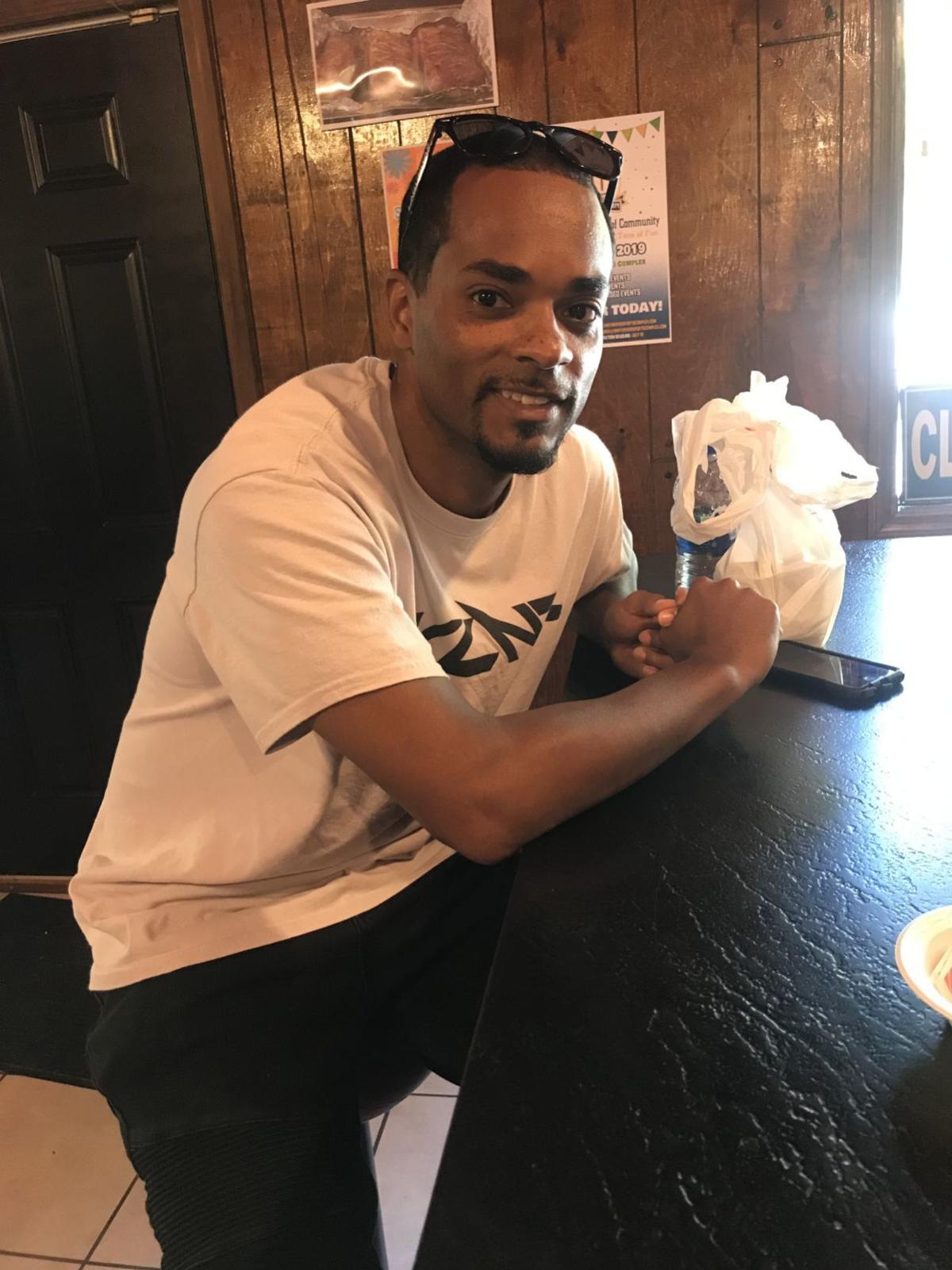 Joe Hylton says that Hasan Davis (pictured) is his right-hand man when it comes to the food truck and restaurant. 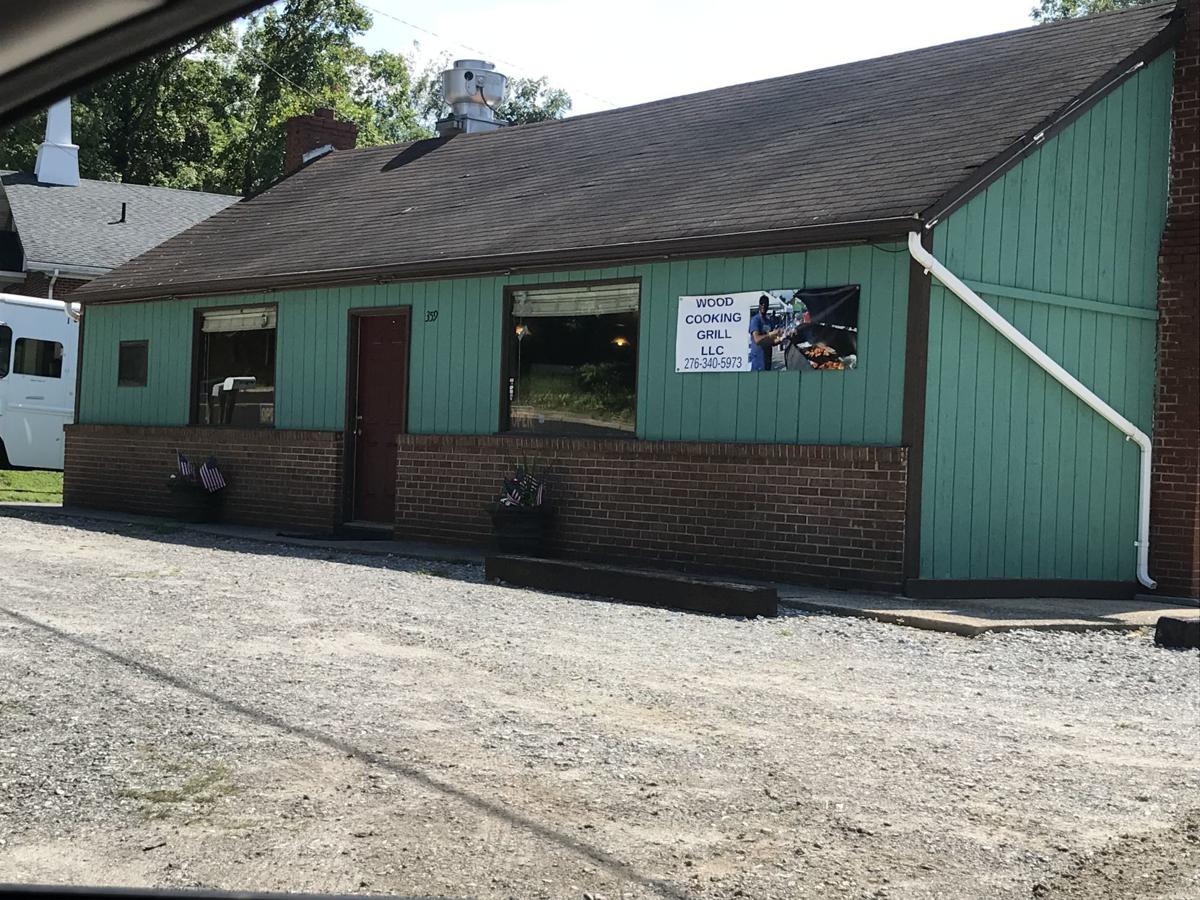 Joe Hylton, who has run the Hylton's Grill food truck for several years, has opened a restaurant, Hylton's Wood Cooking Grill, in Fieldale. It's open from 11 a.m. to 3 p.m. to leave the crew time to continue with their nighttime catering. 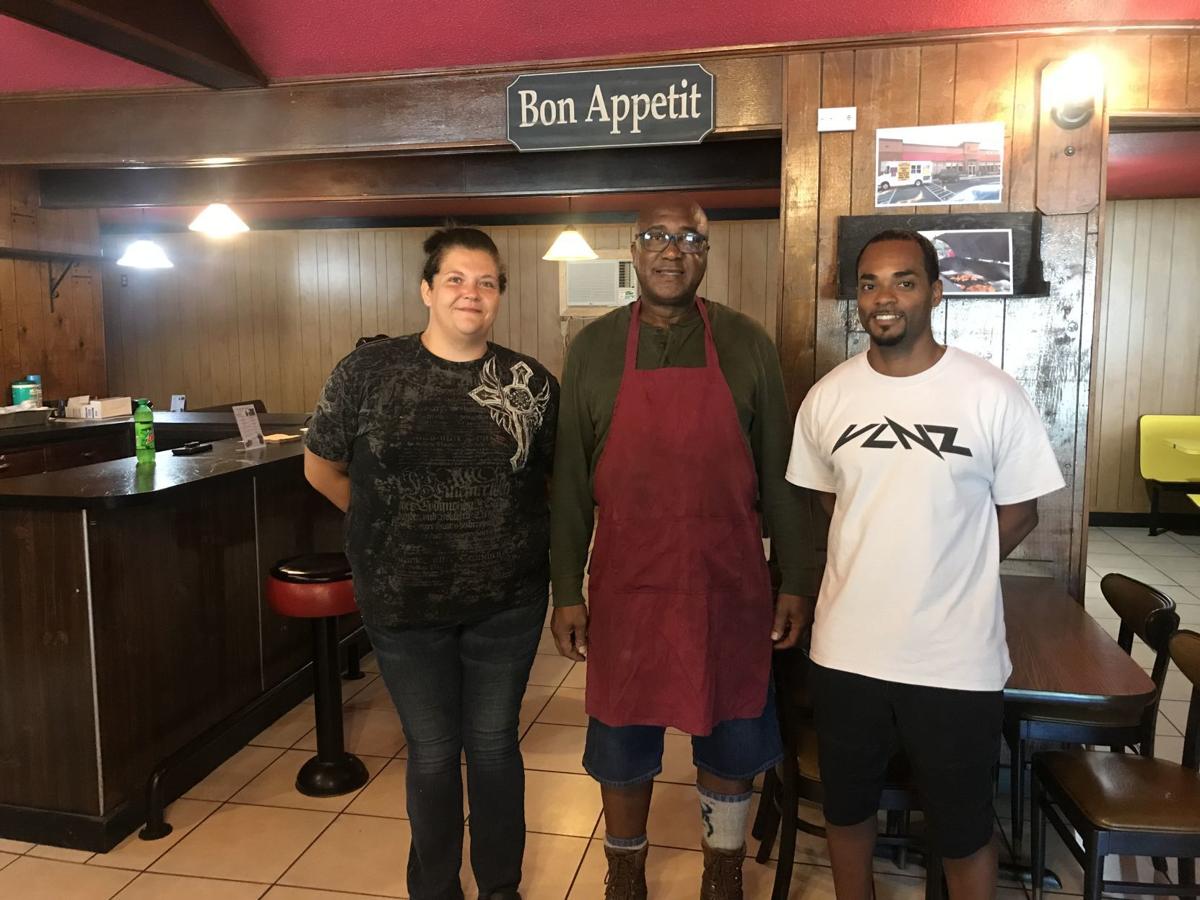 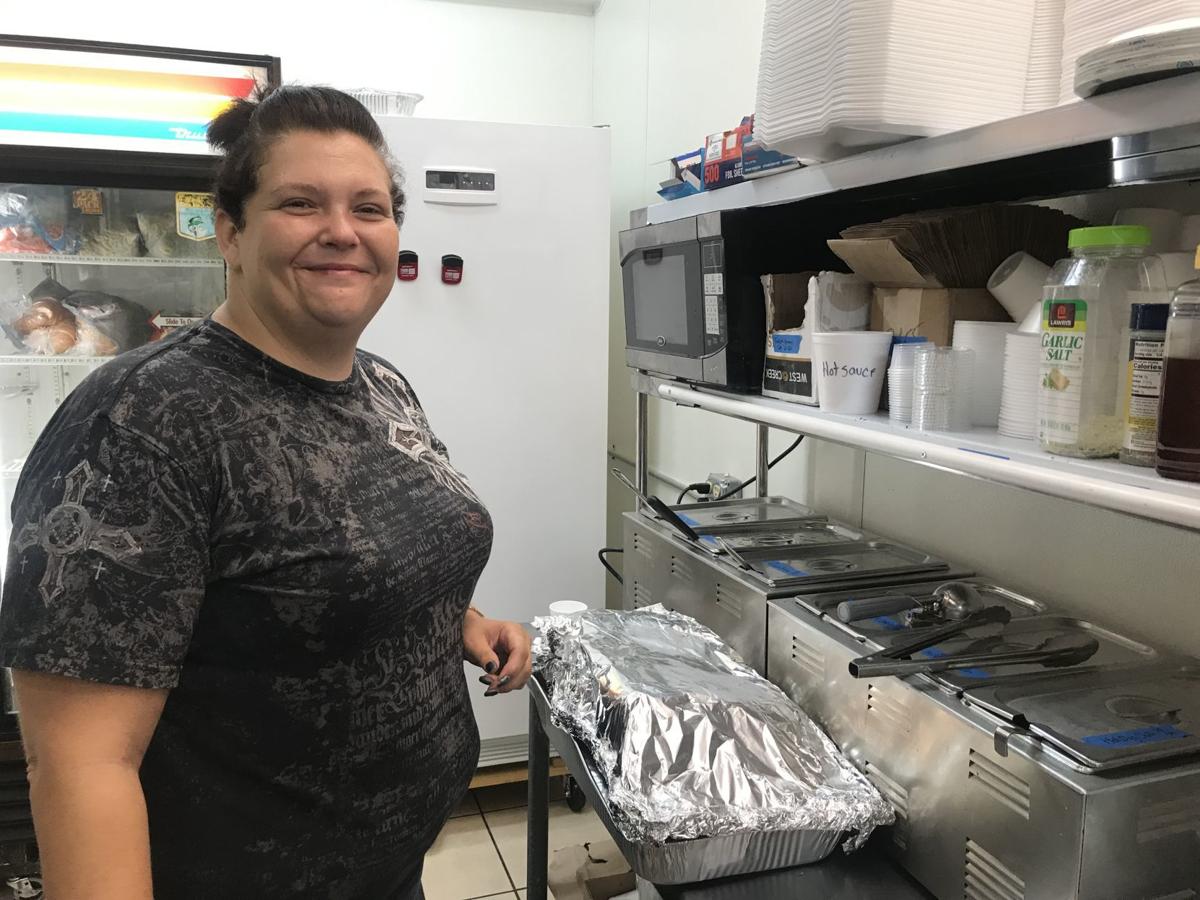 Miranda Meadows worked for Garfield's chicken restaurant in Fieldale for a few years. That restaurant is closed, and now she's in the kitchen and waitressing for the new Hylton's Wood Cooking Grill, also in Fieldale. 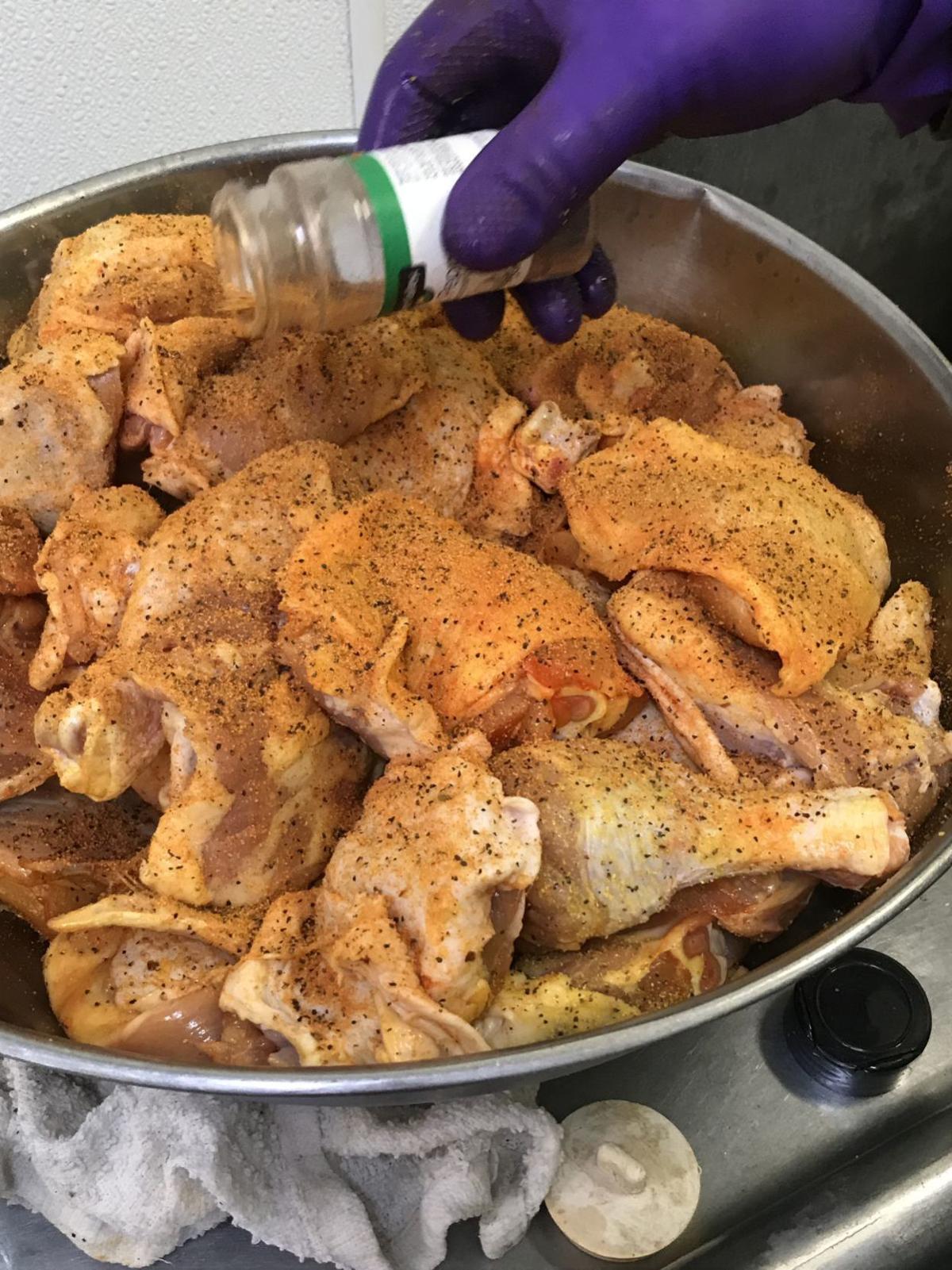 Joe Hylton seasons chicken with a dry rub before cooking it over a fire. 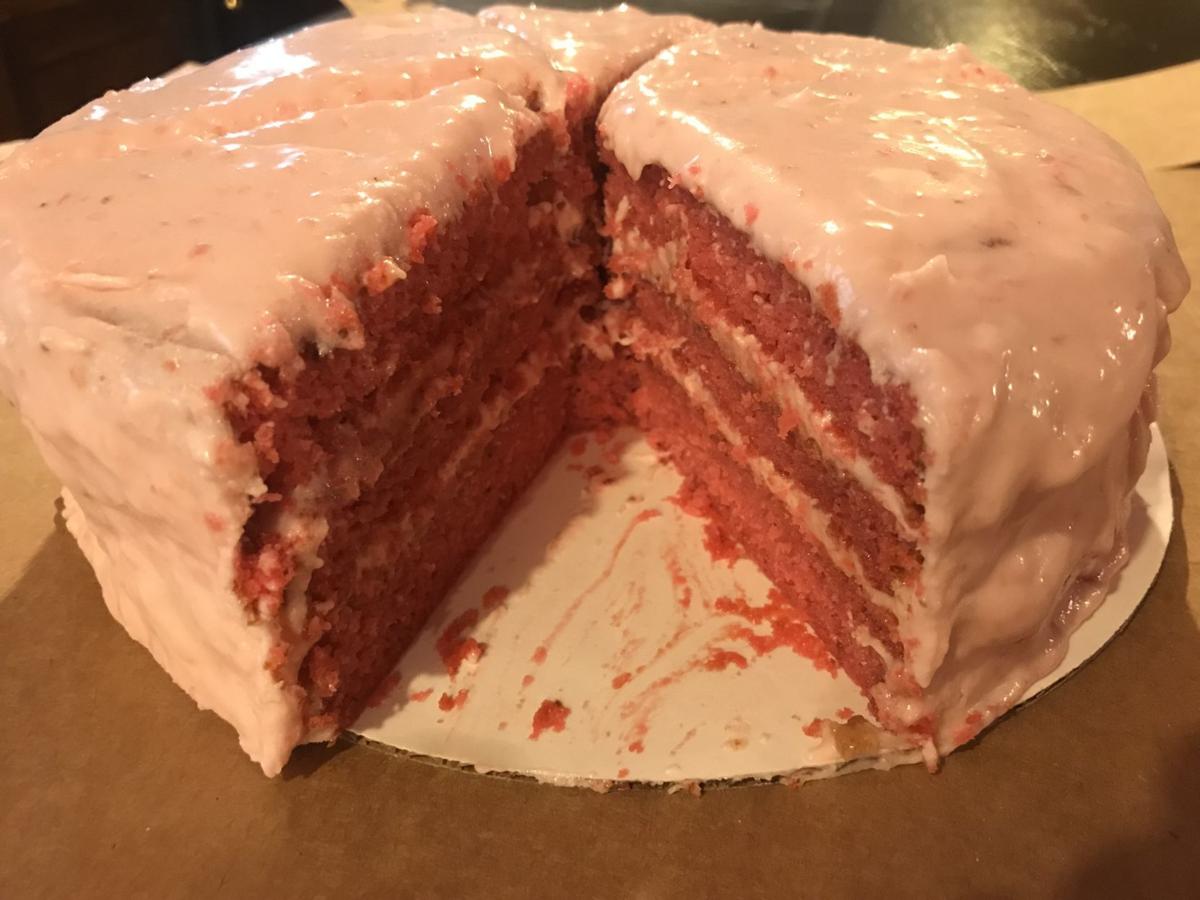 Ready for another day at Hylton's Wood Cooking Grill are Miranda Meadows (from left), Hasan Davis and proprietor Joe Hylton.

Joe Hylton says that Hasan Davis (pictured) is his right-hand man when it comes to the food truck and restaurant.

Joe Hylton, who has run the Hylton's Grill food truck for several years, has opened a restaurant, Hylton's Wood Cooking Grill, in Fieldale. It's open from 11 a.m. to 3 p.m. to leave the crew time to continue with their nighttime catering.

Miranda Meadows worked for Garfield's chicken restaurant in Fieldale for a few years. That restaurant is closed, and now she's in the kitchen and waitressing for the new Hylton's Wood Cooking Grill, also in Fieldale.

Joe Hylton seasons chicken with a dry rub before cooking it over a fire.

The traveling grill-master has settled down in a permanent location: Hylton’s Wood Cooking Grill at 359 Patrick Ave., Fieldale (276-673-4379).

However, the restaurant so far is only open from 11 a.m. to 3 p.m., leaving the crew free to cater or have food-truck service at evening events. Recent appearances include at local wineries and Mountain Valley Brewing in Axton.

Hylton’s Grill is known for its chicken, coated with a dry rub and cooked over fire on a grill he designed and built, as well as ribs, barbecue, beef brisket and grill-cooked meatloaf. He cooks 200 pieces of chicken a day: “We put it on, and the magic happens,” he said.

On Sundays he serves extras. He may fry up some chicken if people ask for it, and “I serve my pigs’ feet. People go crazy on pigs’ feet.”

The side dishes, all homemade, include potato salad, green beans (no pork), traditional and chili-style pinto beans, cole slaw, macaroni salad, macaroni and cheese and cornbread.

Desserts are sweet potato pie, strawberry cake and bread pudding, all by his wife, Ann Hylton, the chief magistrate for Martinsville and the counties of Henry and Patrick.

With him at the restaurant are “my No. 1 man,” Hasan Davis, who helps with outreach and promotion as well as restaurant tasks; Miranda Meadows, who had worked at Garfield’s; and his son Joshua Hylton.

Davis has worked with Hylton for four years, “just making his business better,” Davis said. When he realized how good the food was, “I plugged him in and set him up in events. I saw the response when he would go places. I told him, ‘You need a restaurant because’” everybody’s always trying to figure out where to find his food truck to get his food.

Davis is one of those folks you’re likely to run into anywhere. He runs a public relations service, Peripheral Vision Connections. He has taught swimming to city and county first-graders at the YMCA for the past five years. He works at Hairston Funeral Home, is involved with VA Bespoke and is on the board of directors of Piedmont Arts. He also is a producer of Natalie Hodge’s short movie “Sell,” which is in the final stages of production.

When former Garfield’s customers come in and see Meadows, they say, “‘Oh, there’s Miranda – now we know where she’s at,’” Meadows said with a chuckle.

She said she has enjoyed working at Hylton’s and is a fan of its food, particularly the pintos, the best she’s ever tasted.

Joe and Ann Hylton have four children, Syreeta Gross and Joseph Hylton III, both of Maryland, Joshua Hylton, who still lives locally, and Jevonda Perkins, who lives in North Carolina. They have 10 grandchildren.

While he and his wife were raising a family, he did a great deal of the cooking, because she worked odd hours as a police officer, he said. “We didn’t wait for her to cook,” but rather always had meals ready for her when she would get home.

Hylton is a graduate of the University of Eastern Shore and started teaching in Maryland. He has been a technology teacher at Magna Vista, Fieldale-Collinsville and Bassett high schools.

He also has been a salesman for Grand Piano and Furniture in Martinsville, washed cars and spent a few years with a dump truck business, which involved a good deal of traveling.

His grill was born out of the memory of a bad grill he saw while working in Florida. The former teacher in him said, “‘They did it wrong,’” he recalled, and right then and there he planned out how he would make the perfect grill, should the occasion ever arise.

One day a few years later, he was at a concert with lots of great music and a large audience – people who got hungrier and hungrier as the night went on, with nothing decent around to eat. The grill-and-food-truck idea came back to mind, and he started building a traveling grill.

With his dream grill built, Hylton got all the appropriate permits and set up at the end of the parking lot at The Country Store in Horsepasture. “Before I knew it, I was totally busy, and they were just running for that chicken,” he said.

After a while of great business, another food vendor with a much larger truck came and took his spot. However, “the guy with the big truck lasted two months, then he was gone,” Hylton said.

Hylton’s truck was back at The Country Store, but when he got news a Subway franchise was coming in, he figured his time there would limited, he said.

However, Brian McArthur of Mini Par Driving Range apparently had the same idea: He was up there in a flash, asking Hylton to move to the golf course.

At the golf course, “he had a lot of attention,” McArthur said. “People [are] still asking for Joe. I’m telling everyone that he has a business-front in Fieldale, so go see him.

“Joe is a good guy, one of us little entrepreneurs trying to make a difference,” he said.

Hylton said he never had thought about having a restaurant, but he started to see the need to have a bigger kitchen to handle the preparation for the large catering jobs he was starting to have.

He said he ended up talking with Valerie Harper, the Economic Development Corporation’s director of business development, about looking for a commercial kitchen. Not long after, she let him know about the location in Fieldale. When he saw it, the idea of a sit-down restaurant came to him.

“Joe’s been around for a really long time, and he’s a local favorite,” Harper said. “I know that he has some regional fans, also.”

Hylton “eased into it instead of jumping at the first thing,” she said.

Hylton started working in the building about three months ago, he said, but he didn’t open to the public until a few weeks ago.

He did an informal test run on a Saturday last month and had far more people than he expected. All his did was put a sign out front and “had several groups of four, three, two people,” he said. “They just kept coming in until I pulled my yellow sign back in.”

CORRECTION: An earlier version of this article contained an incomplete list of the Hyltons' children.