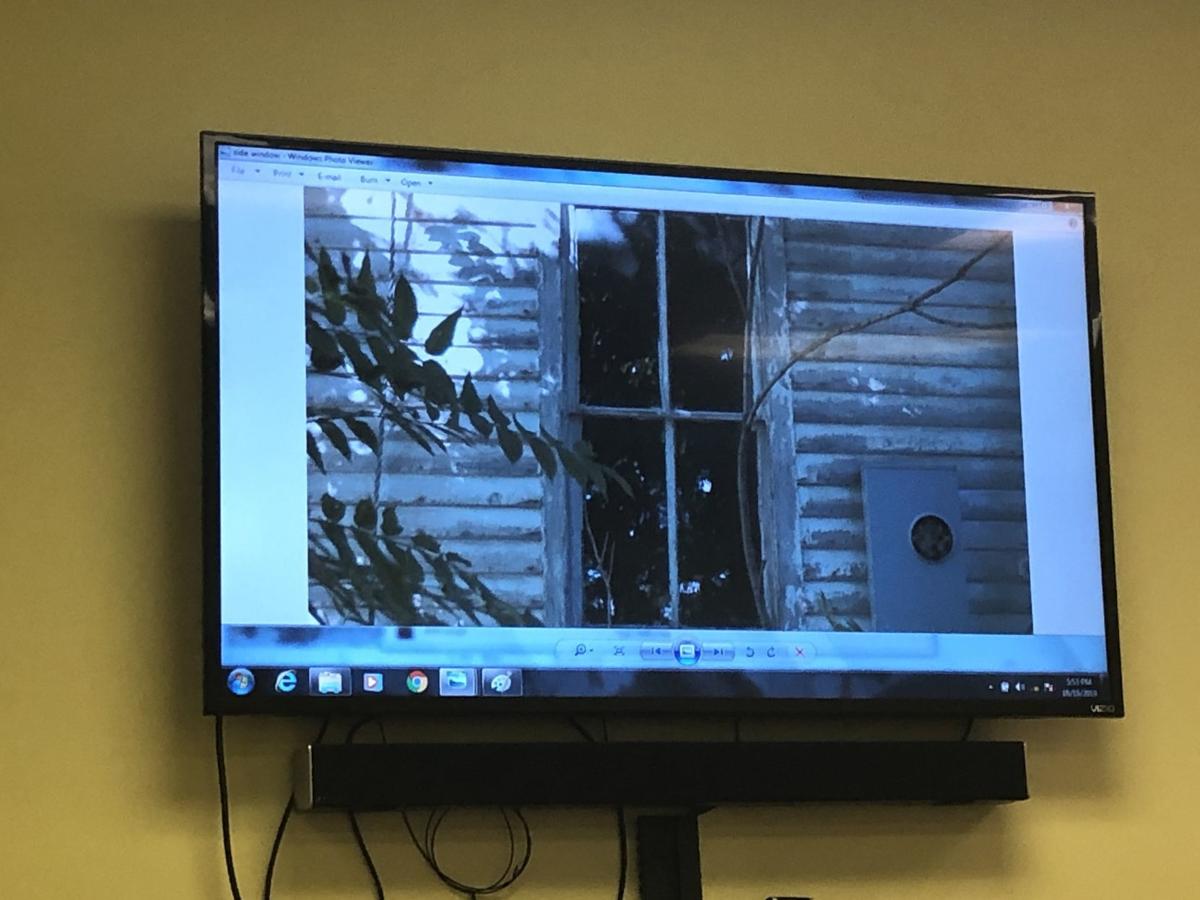 Buster Williams of Franklin County Va Paranormal says if you look closely at this window, you'd see the image of a ghost in the upper right corner. 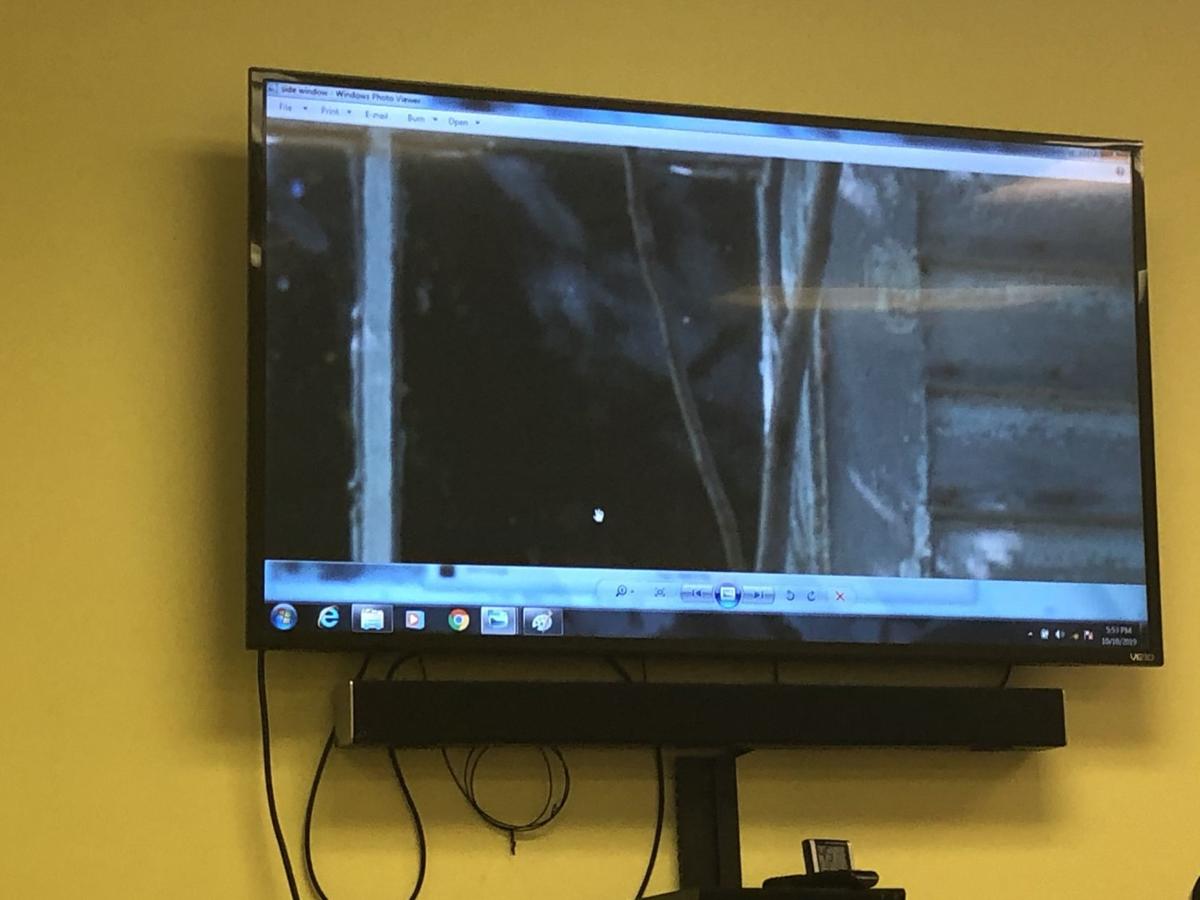 In this closeup of the upper right corner of a window in an old house a ghost can be seen, says Buster Williams of Franklin County Va Paranormal. 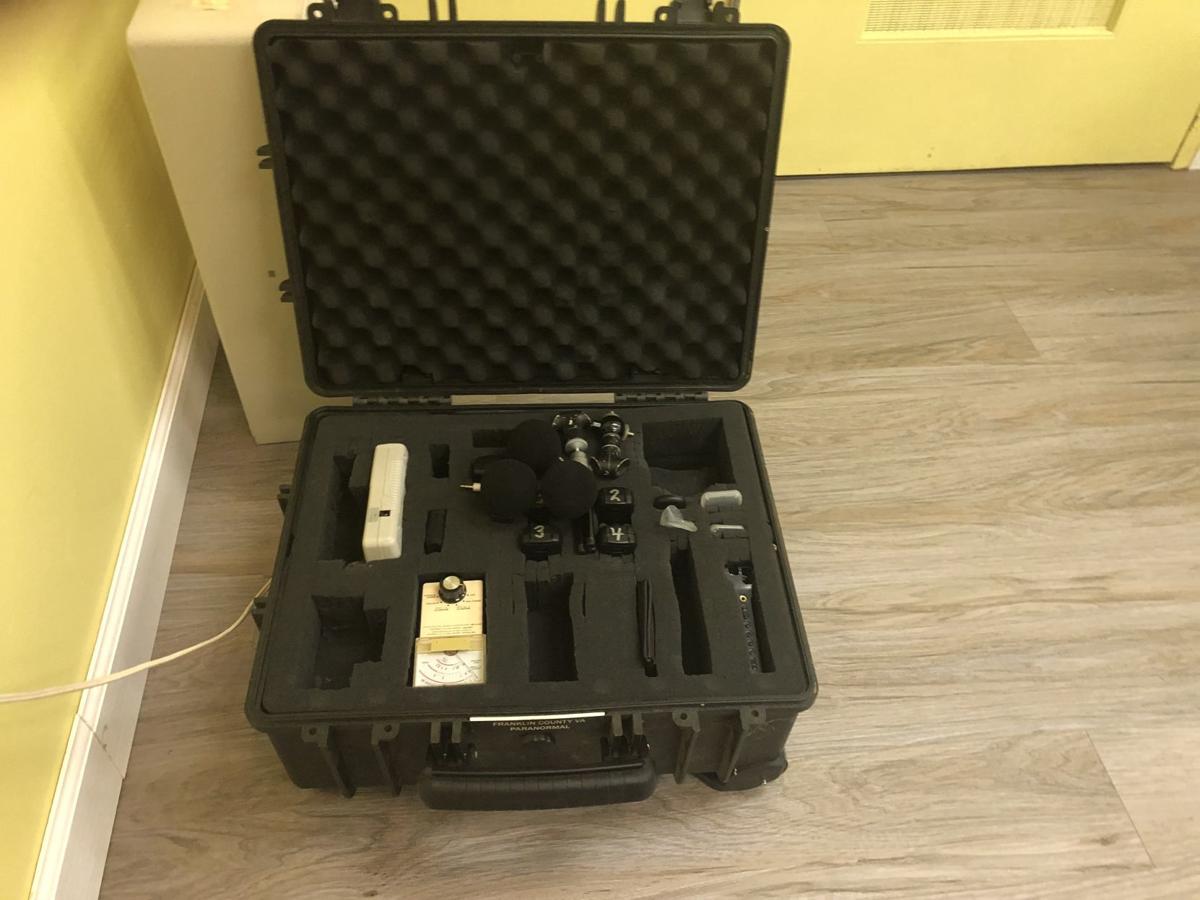 Buster and Janet Williams bring this case which holds their equipment to sites where they plan to investigate the supernatural. 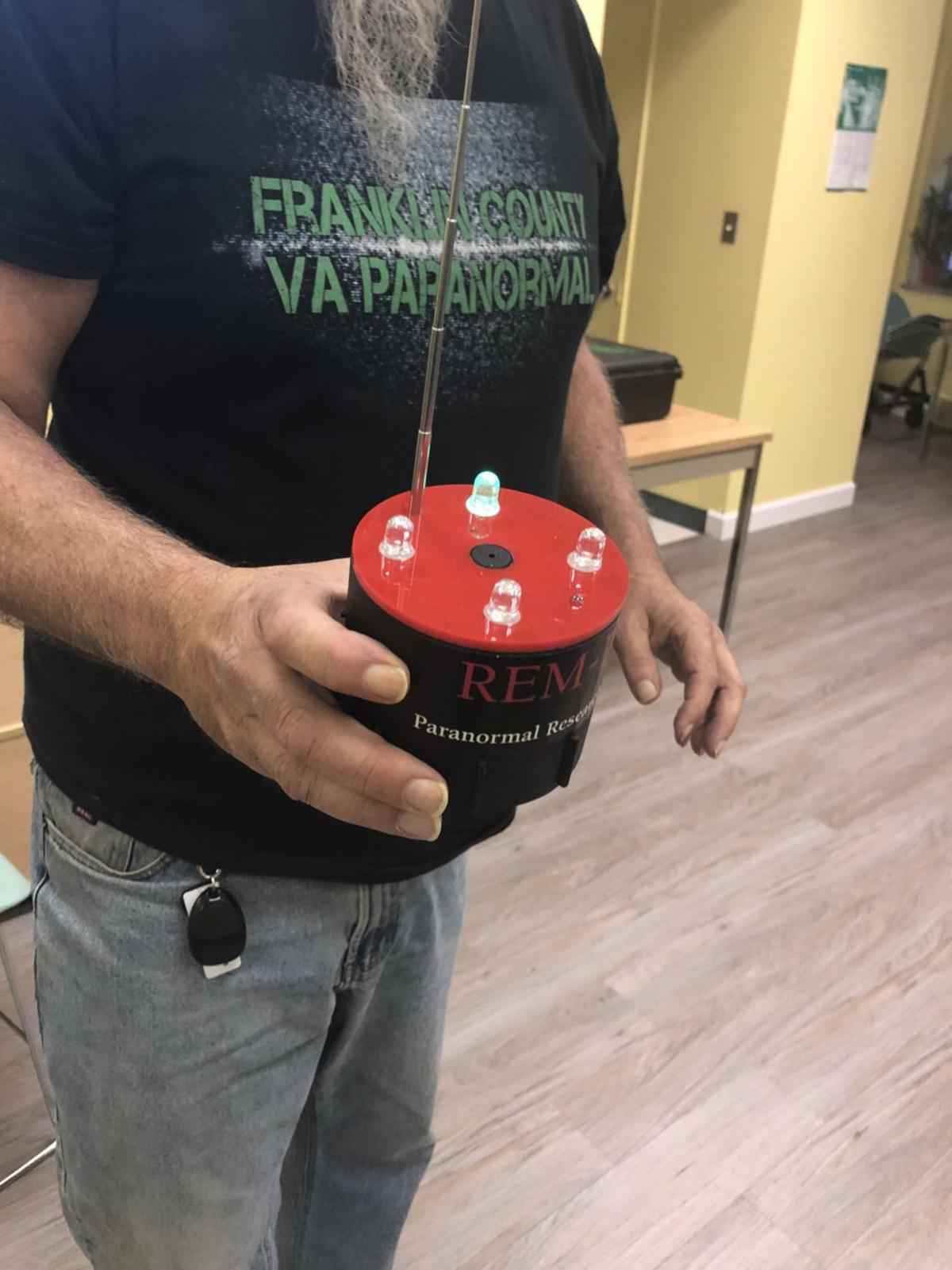 Buster Williams shows an electromagnetic field change detector used to detect the presence of the paranormal. 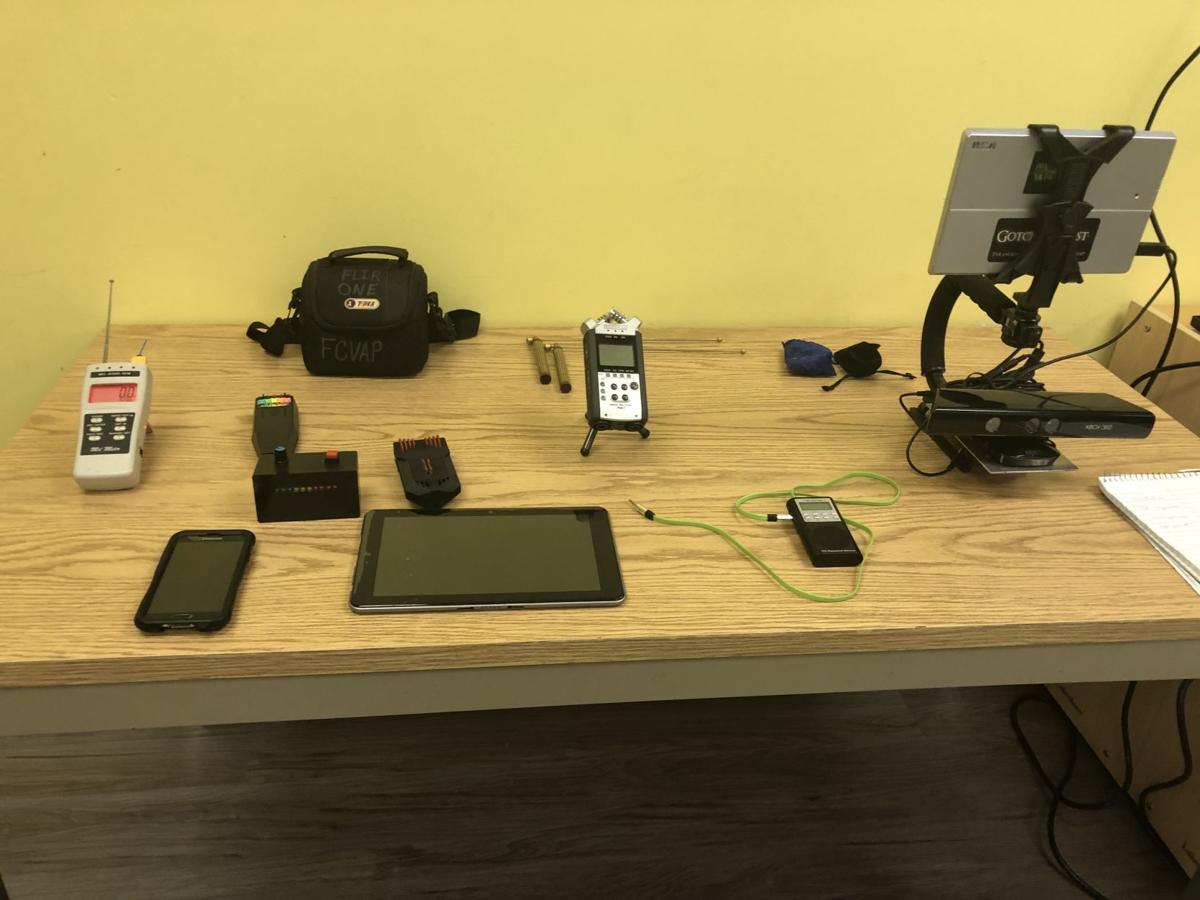 A sampling of Buster and Janet Williams’ ghost-hunting equipment is laid out for viewing. 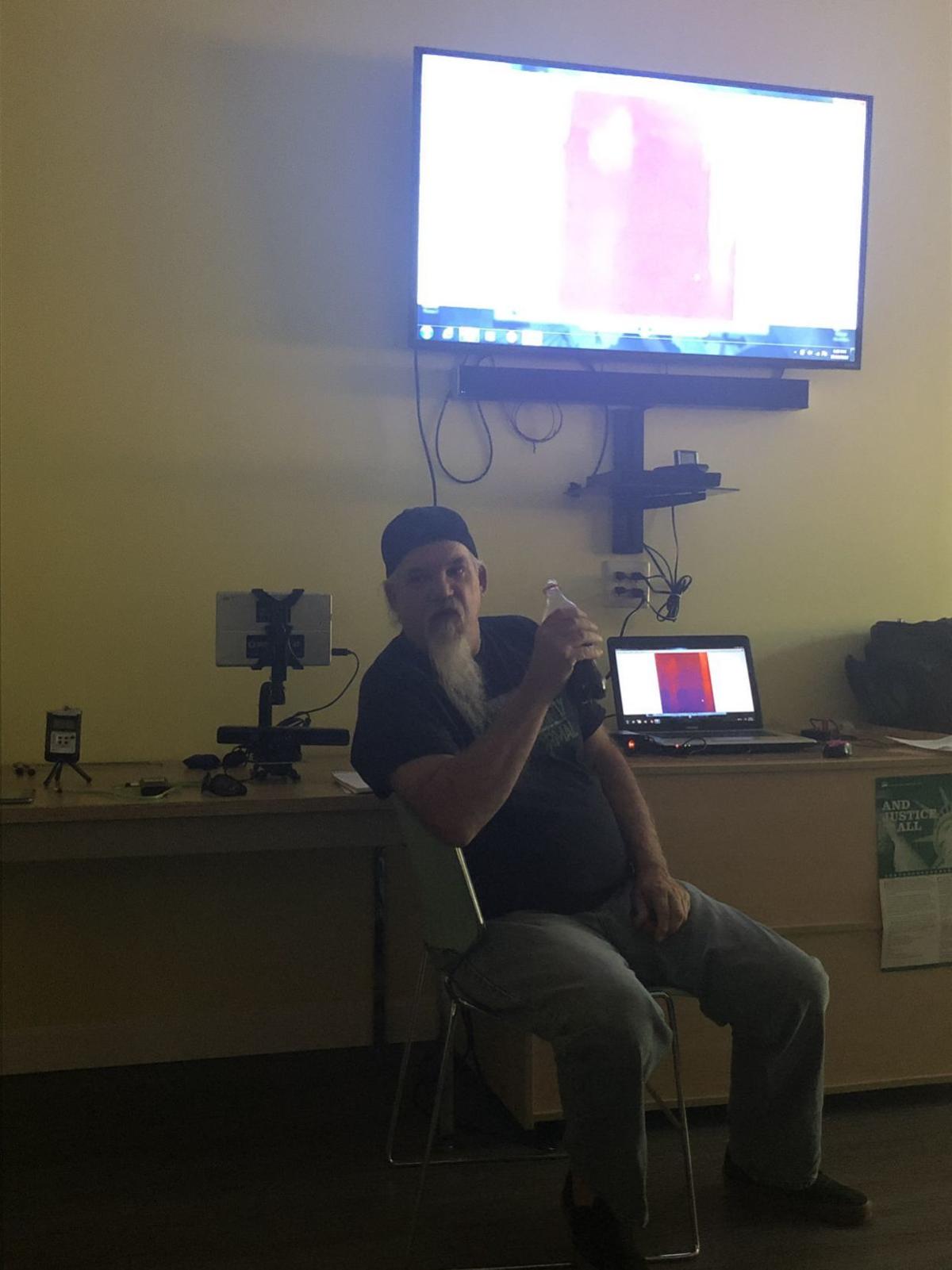 Buster Williams shows a variety of images taken while he and his wife were out searching for paranormal entities. 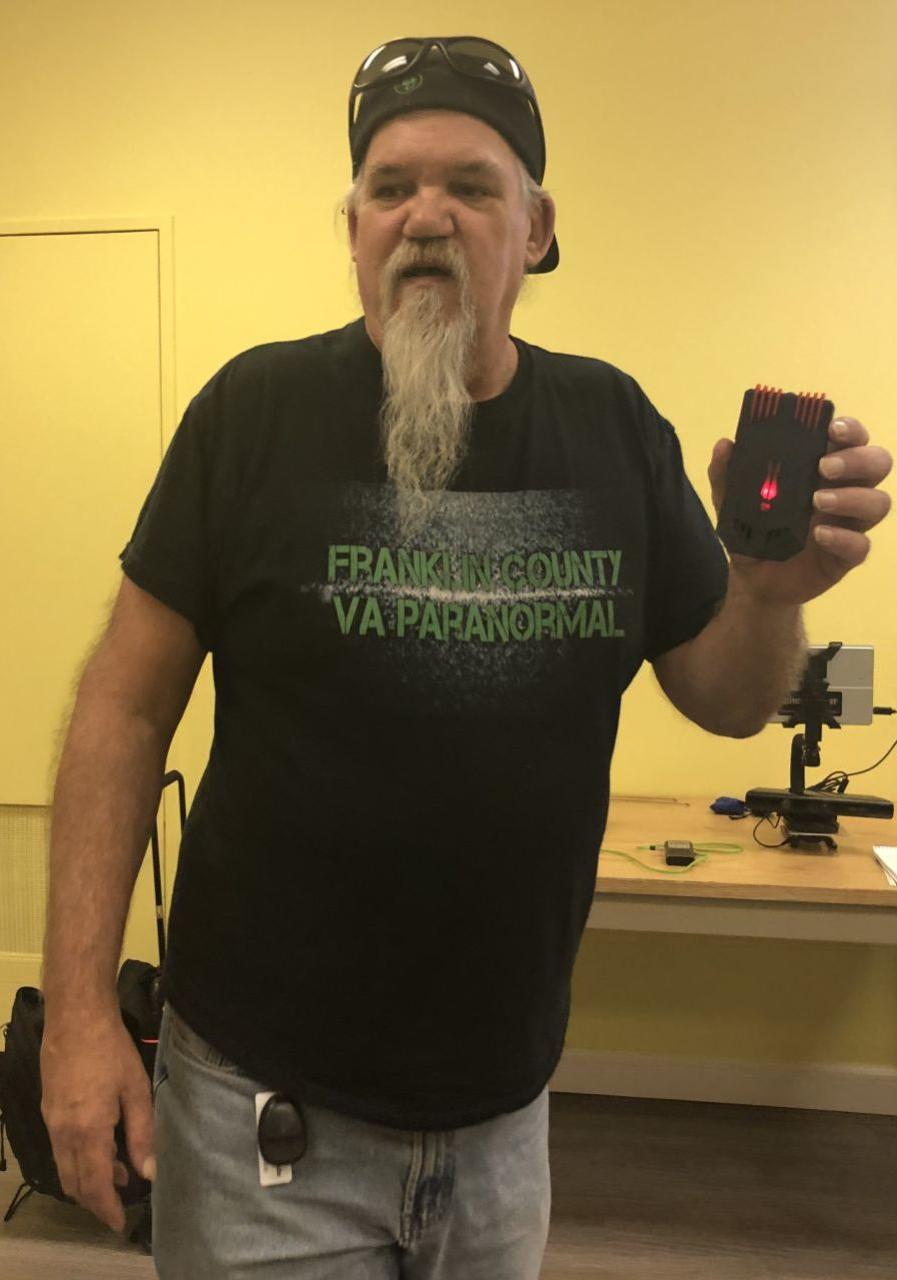 Buster Williams of Franklin County Va Paranormal says if you look closely at this window, you'd see the image of a ghost in the upper right corner.

In this closeup of the upper right corner of a window in an old house a ghost can be seen, says Buster Williams of Franklin County Va Paranormal.

Buster and Janet Williams bring this case which holds their equipment to sites where they plan to investigate the supernatural.

Buster Williams shows an electromagnetic field change detector used to detect the presence of the paranormal.

A sampling of Buster and Janet Williams’ ghost-hunting equipment is laid out for viewing.

Buster Williams shows a variety of images taken while he and his wife were out searching for paranormal entities.

If you sense a ghost in your home, you’re probably right, Buster and Janet Williams would tell you – and they would love to check that out for you with their special equipment.

The Williamses are “Franklin County Va. Paranormal.” They’ve investigated suspected haunted sites in Henry and Franklin counties and beyond, especially during the past decade.

They share their experiences with the supernatural on their Facebook page “Franklin County Va Paranormal,” YouTube and, recently, at a program at the Martinsville Branch Library.

They have been together for 40 years and “are researchers – historical and paranormal,” Buster Williams said.

When they first started spending time together, he said, he noticed she would offer greetings as they walked down the street together – except he didn’t see anyone there.

“Come to find out, she can see spirits,” he said.

Although he used to be skeptical, Williams said he has come around to being able to sense and understand spirits.

He said his wife sees a ghost as clearly as another person, but he sees one as a blur.

When he asked audience members if they believed in ghosts, most raised their hands.

“I didn’t believe in them until I saw them,” Dillard Norman said.

An early experience the Williamses had with ghosts was when they were first married and living in an old house in Nortonsville.

One day, Buster Williams said, he thought he saw new curtains in an upstairs window. His wife told him there were no curtains there, but she could see it was the wife of the house’s previous owner’s father, waiting for them to come home.

The couple also had an encounter with a ghost in Corbin’s Cabin, he said. That was an old cabin a mile and a half down a hill, where the family had gone for vacation.

As they were settling in, the cabin filled with smoke. Cabinet doors opened suddenly, and stuff flew out of them.

Buster Williams said he has had his own solo encounters at a motorcycle shop he had at an old depot in Franklin County. Eerie experiences included hearing a commotion when he was alone, tools missing and seeing a shadowy figure pass.

There are four types of hauntings, Williams said: residual haunting, like a video replaying a same scene, with the presence unaware of the observer; intelligent haunting, in which the presence is aware of its surroundings and can communicate; shadow figures; and poltergeists.

He showed pictures taken locally that he said captured images of ghosts. One, taken in a house in Bassett, was supposed to be of a cat – but in the background was the image of a man who had died two years earlier, sitting in his favorite chair.

He also played several recordings in which, he said, a spirit’s voice could be heard. He played one, and no one reacted. He played the video a second time, this time telling everyone that a ghost can be heard saying “hey,” indicating the moment. Nearly everyone in the audience gasped simultaneously when they heard it.

The Williamses lead occasional walks through Franklin County, in which they point out places where ghosts may be seen. He said he tells people who join them that they probably would see a spirit, but “‘you may never see a spirit. If they contact you, or you see one or one has an interaction with me, I feel like it’s a gift.”

The pair along with other family members – “my daughter has the same gift as my wife,” he said – have on occasion gone to Radford to the reportedly haunted St. Alban’s, an old sanatorium.

In recent years, though, the place is becoming commercialized, and the experience isn’t as intense, he said. It has been too cleaned up and is expensive to enter, but worse, “now they herd you all in one room” at a time instead of letting folks wander about freely.

They’ve been to the Biltmore Hotel in Greensboro, N.C., where their equipment showed evidence of a ghost sitting on the edge of a bed, he said. He showed a picture of a dark room, much of it with an orange or red glow – but blue, “a cold spot, where he [the ghost] was sitting.”

They’ve been four times to the site of the Carroll County Massacre, once for three days, he said. “There are four spirits still there,” he said.

The Williamses use various pieces of equipment to detect ghosts, spirits and other types of paranormal presences.

He uses a thermal imaging camera to photograph “heat signatures” of spirits.

A geophone, which measures vibrations, is handy for communicating with ghosts. You can ask questions, and “the ghost can tap once for yes, twice for no,” he said.

When it comes to looking for ghosts, there’s a whole lot of waiting around, and it’s usually boring, he said.

When it comes to demons, though, keep out of their way, he said.

“They’re not of this world. You really don’t want to go and contact a demon,” he said.

Several spirits stay in the Williams’ home, he said. The couple doesn’t set up barriers against the spirits, “but we do protect ourselves.”

He might “see a shadow go by” at any time he’s working on the computer.

How many ghosts has Janet Williams seen? “I lost count,” she said. “I bring them home all the time.”

Talk to the ghosts

Buster Williams said he recommended that anyone who finds a spirit should try to communicate with it, “because communication calms them down.”

His wife said anyone who wants to talk with a ghost should tell the ghost, “I come alone, and I leave alone.”

“We’ve had incredible interactions with spirits just by being nice,” he said.

“You want to treat them like friends or family,” his wife said. Being mean to them “will make them evil-mean.”

The Williamses do not charge to investigate areas with suspected paranormal presences, he said. He works as a truck driver, and they occasionally have fundraisers to help pay expenses.

Fundraisers include “Ghost Walk,” a “walking investigation” in downtown Rocky Mount, with stories of documented experiences, local history and “live paranormal investigation experiments,” their Facebook page states. Two Ghost Walks were conducted in September and two in October. Tickets were $20.

Other fundraisers have been at the Biltmore Hotel, where people paid $25 plus their own room fees, and Pearis Theatre in Pearisburg ($25).

“You really don’t have to go anywhere,” he said. “Spirits are all around us all the time. Just because we don’t see them doesn’t mean they aren’t there.”