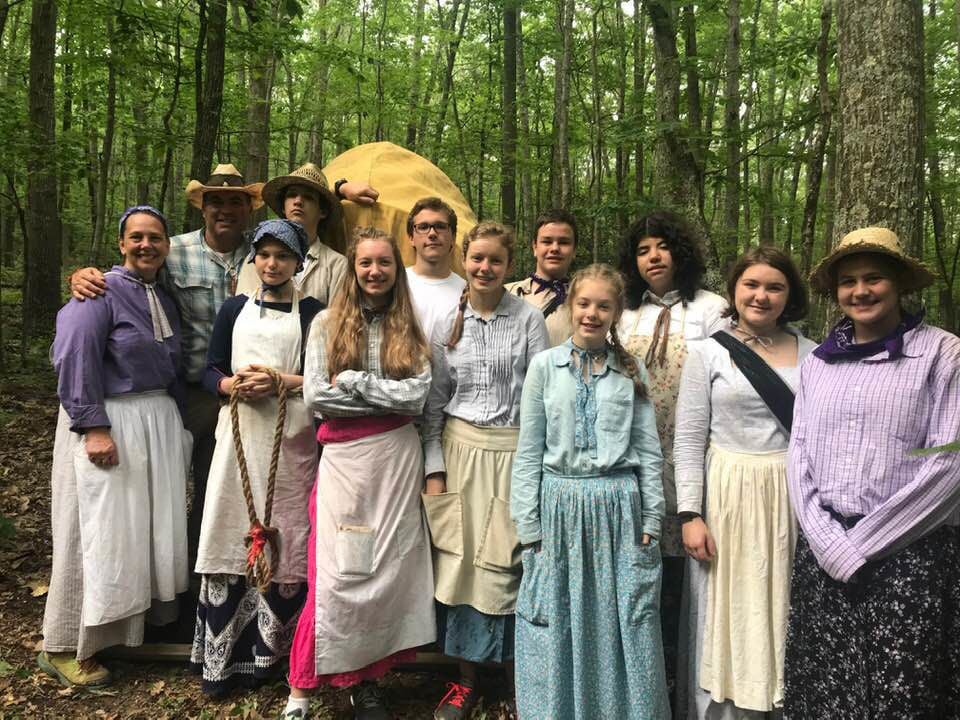 Barry and Brenda Moxley of the Martinsville congregation of the Church of Jesus Christ of Latter-Day Saints acted as family leaders for the trek. Leaders hiked with a minimum of nine teenage pioneers. 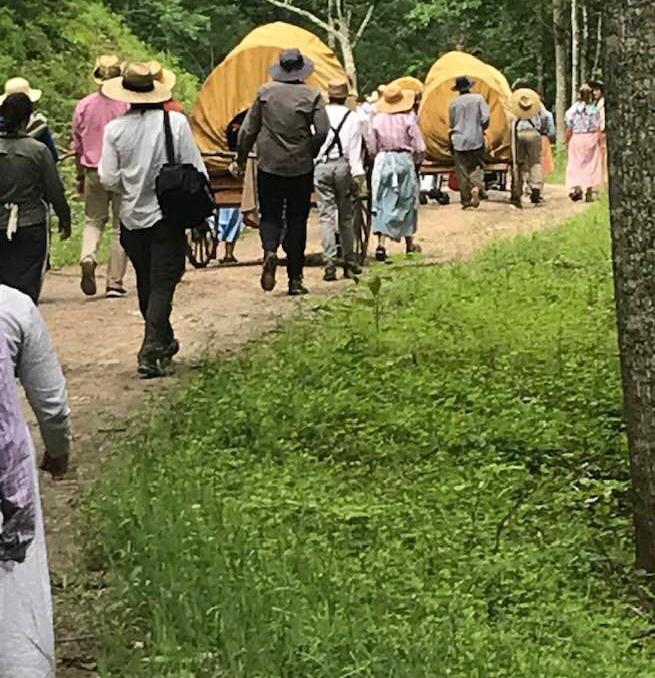 A group of 100 teenagers and 20 adult leaders pushed handcarts through the mountainous terrain of Craig County, gleaning a better understanding of the beginnings of their faith.

Barry and Brenda Moxley of the Martinsville congregation of the Church of Jesus Christ of Latter-Day Saints acted as family leaders for the trek. Leaders hiked with a minimum of nine teenage pioneers.

A group of 100 teenagers and 20 adult leaders pushed handcarts through the mountainous terrain of Craig County, gleaning a better understanding of the beginnings of their faith.

A total of 100 teenagers, ages 14 through 18, and 20 adults from Church of Jesus Christ of Latter-Day Saints congregations throughout the region recently gathered in Craig County, north of Blacksburg.

This youth outing wasn’t to a bowling alley or a movie. They didn’t even meet up for pizza.

Instead, dozens of people traded their graphic tees, comfy shorts and flip-flops for more historic attire. Teens and adults donned bonnets, suspenders, petticoats, trousers and other fashionable clothing styles from well more than a century ago. Then they started walking.

For three days – Thursday, Friday and Saturday – the group, including some from Martinsville and Henry County, traversed a 17-mile long mountainous terrain carrying everything they needed to survive in the wilderness.

The hike gave the teenagers a view into a time in their faith’s history that was as rocky as the paths they encountered on the trail.

Following a string of persecution events that took place in Nauvoo, Ill., against Mormons in the late 1830s and 1840s, believers set out for Salt Lake City, Utah. Hoping to start anew and worship freely there, upwards of 70,000 people packed their things and fled.

Approximately 180 years later, this group of Virginians set out to explore history outside of textbooks.

“They wanted to make it something similar, so that the youth in the trek could think back on some of the pioneers back in the day who did the trek in the 1800s,” said Jennifer Brown, a public affairs professional at the Church of Jesus Christ of Latter-Day Saints in Roanoke.

A small percentage of the 70,000 pioneers didn’t join wagon cart processions because of financial constraints. Instead, they loaded handcarts and made the treacherous journey on foot.

“That’s what they were trying to replicate, the 3,000 that left Nauvoo when they were told they would have to leave,” Brown said.

Some handcart groups seeking refuge in Salt Lake City faced harsh environmental factors on the way. The freezing temperatures and threat of wintry precipitation caused the second president of the Mormon faith to send help.

“They left too late. It was too close to winter. They were stranded in Wyoming on their way out. There were people who starved to death,” Brown said. “Brigham Young sent a party to rescue those handcart companies.”

Finding a balance in showing an accurate portrayal of history while still having fun and being safe, this modern-day group packed a plethora of provisions and hiked in more temperate conditions.

“The leaders didn’t want the youth to have this trek be one of being hungry, even though that happened [historically]. They wanted them to have plenty of food and concentrate on doing the trek and concentrate on those who traveled using the handcarts,” Brown said. “They wanted to make it a spiritual experience for the kids and talk about the pioneers and their love of their faith and their dedication to their faith. That’s why they did that, because of the love of their savior and wanting to make that trek.”

Led by trail boss Jim Gerken, they spilt into groups of nine or more teens and two adults, which they called families, camped out under the stars, pulled their belongings in handcarts and cooked meals over an open flame.

Each teen took on a new name reminiscent of the pioneers.

“They would look at the name and say, ‘If they made it, I can make it,’” Gerken said.

The morale boost from knowing that they carried the name of a real person who made the trek decades ago came in handy on the first day, when the hikers encountered their initial endurance test.

“The first day, Thursday, was 90% uphill,” Gerken said. “These were a great group of youth. I never heard one of them complain. I heard singing and laughter – jokes about how hard it was, but no actual complaints.”

At dinnertime, the trekkers settled around a campfire to prepare their own meals.

“Plenty of food was provided for the youth. Foil dinners were available for one dinner with all the fixings available,” said Brenda Moxley, a family trek leader and member of the Martinsville Latter-Day Saints congregation. “The youth picked out what they wanted and prepared their own foil dinners to bake by the fire. There were cobblers in cast iron skillets. We had pancakes and eggs for breakfast.”

In the midst of their weekend adventure, teens embraced some of the same struggles as the pioneers of their faith.

Hours before the trek ended on Saturday, some leaders, acting as angels, pulled select trekkers off of the path and away from their families. The angel impersonators revealed that the chosen teens did not make it to the end of their journey and that their pioneer was buried along the trail.

“We wanted them to know that people sacrificed,” Brown said. “People did die on the way. They sacrificed their lives in traveling across the country to a better place, a place where they could live and have freedom of religion and worship how they wanted to.”

As the group emerged from the woods on Saturday, the teens left with a deeper understanding of the beginnings of their faith.

“Our local church leaders wanted the youth to have spiritual experiences learning about the strong faith of the pioneers,” Gerken said. “That was their focus.”