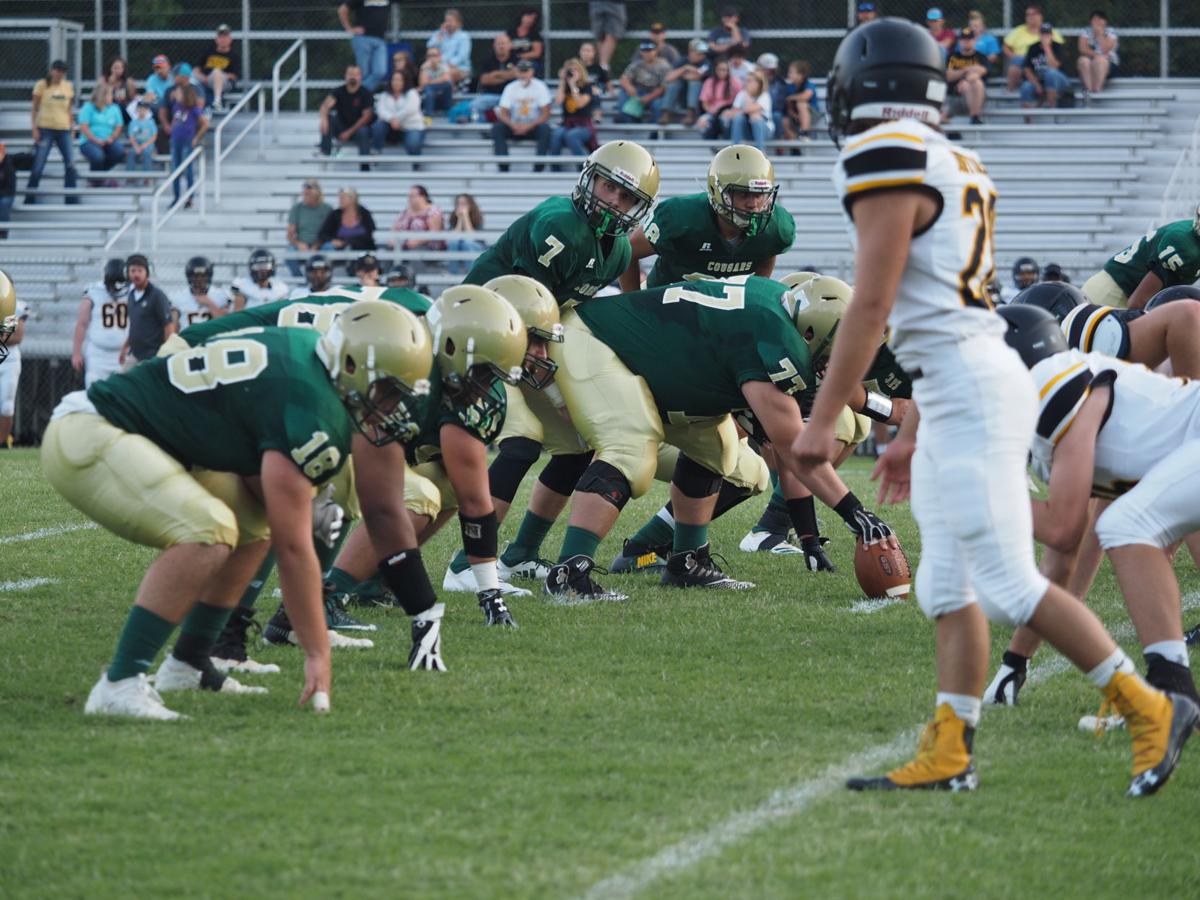 Patrick County quarterback Will Sprowl (7) looks over his offensive line during Friday's loss to Floyd County in Stuart. 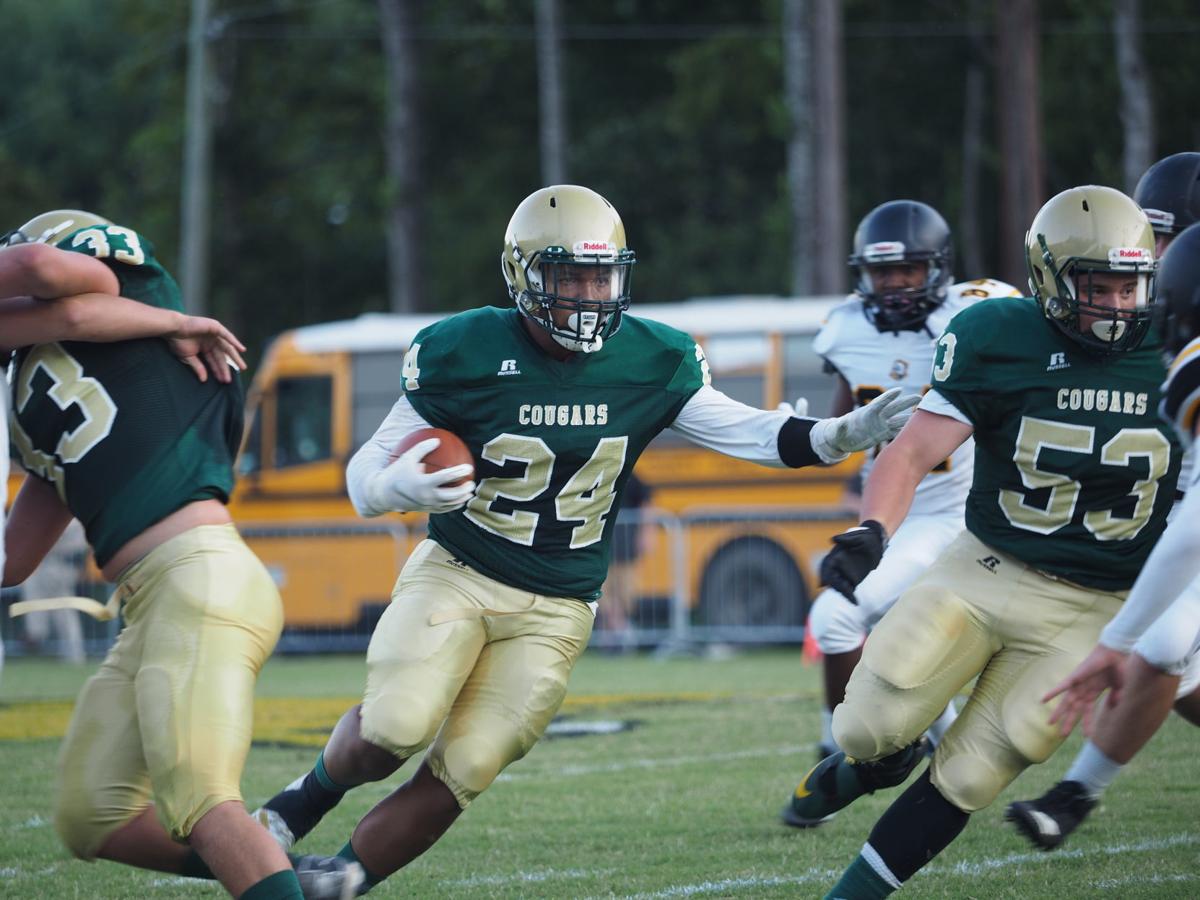 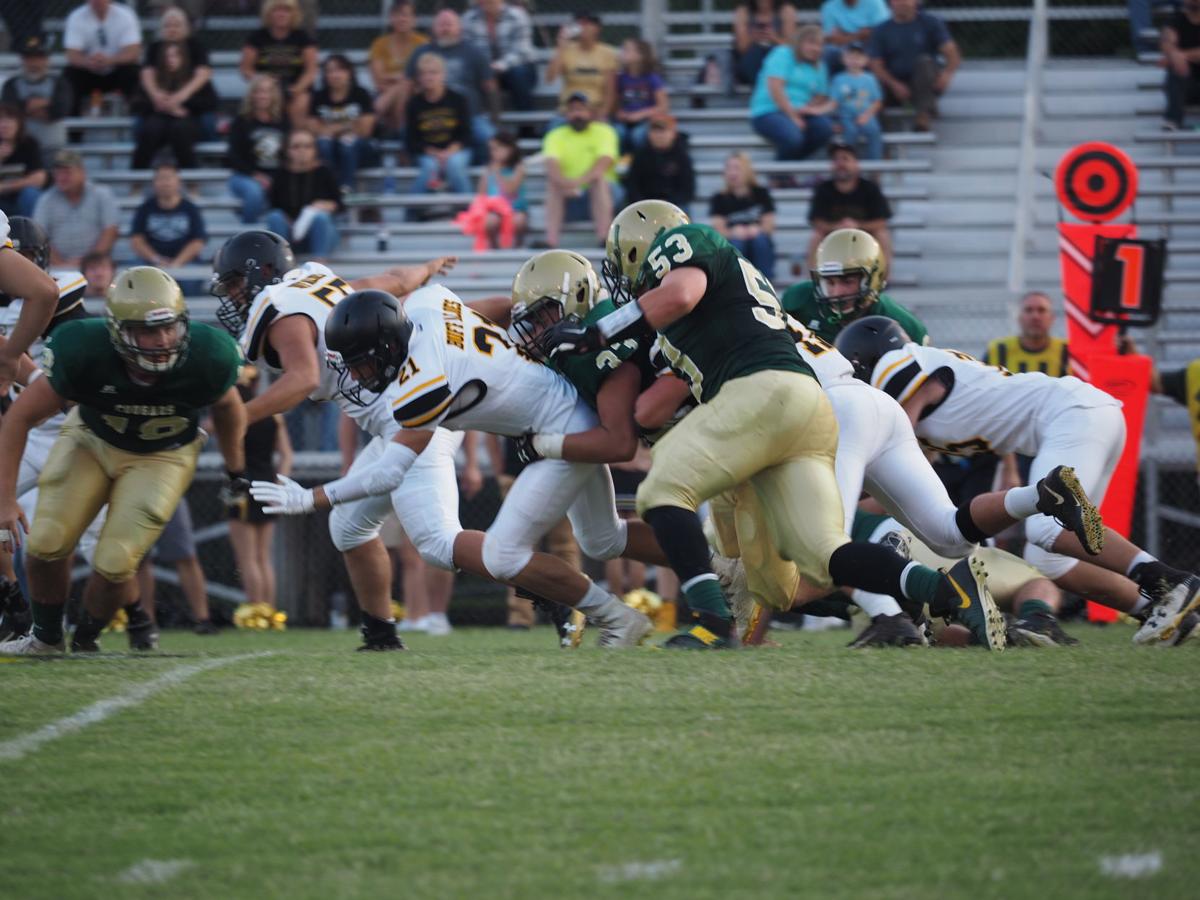 Patrick County's Carson Merriman (33) and Jonathan Pell (53) join up for a tackle during Friday's loss to Floyd County at home Friday night.

Patrick County quarterback Will Sprowl (7) looks over his offensive line during Friday's loss to Floyd County in Stuart.

Patrick County's Carson Merriman (33) and Jonathan Pell (53) join up for a tackle during Friday's loss to Floyd County at home Friday night.

Cougars head coach David Morrison admitted that after the victory his team may have ‘lost a bit of focus’ in the following week of practice. With a youthful team, he admits that’s to be expected, especially for a team that’s not used to winning on a consistent basis.

“We’ve been saying it a long time because we really believe it. We see what our kids are doing, we see the work they’re putting in in the offseason, we see how hard they’re working. We’re closer than people understand,” Morrison said. “Part of this is we’ve got really start believing and focus on the task at hand... Especially this week, I think after the big win against Carroll we lost a little bit of focus and we’ve got to be able to refocus ourselves. I think right now with the team’s mindset moving forward you’re going to see a much more focused team.”

Youthful indiscretions hurt the Cougars Friday night at home against Floyd County. Patrick County lost the lead twice, were penalized seven times for 75 yards, and twice had long drives end on fourth down stops in the redzone in a 13-12 loss to the Buffaloes.

The Cougars took the lead early on a four yard quarterback scramble for a touchdown by Will Sprowl midway through the first. Patrick County carried that lead through the end of the first quarter, and much of the second. But they missed two scoring opportunities, the first coming immediately after their touchdown when Nicholas Tarpley recovered another Floyd County fumble on the Patrick County 25-yard line. Patrick County’s ensuing drive went just three plays after they couldn’t recover from a bad snap on the first play pushed them back 15 yards.

The Cougars’ offense from there was able to move the chains and put together long drives, but when working drives that take so much time off the clock, failing to convert that into points was ultimately what hurt the team the most. Their only drive of the second quarter lasted 17 plays and took more than eight minutes off the clock, but it ultimately ended with an incomplete pass on fourth down on the Floyd 19-yard line. Twice on the drive Patrick County was called for 15-yard personal foul penalties.

Floyd responded by moving down the field in seven plays and scoring on a 15-yard pass from Avery Chaffin to Tyler Fenton with seven seconds left on the clock to take a 7-6 lead into the half.

“It was a little bit of a stunned,” Cougars head coach David Morrison said of the mood at halftime. “We were a little bit stunned because we basically hurt ourselves. We had some penalties on some big plays that ended up hurting us and we had an error in assignment that cost us a touchdown. Things like that, you cannot play a team that’s as well coached as Floyd and overcome it. You cannot have those breakdown and overcome that because they’re a fantastic team.”

Mistakes continued to loom large in the second half. After another failed fourth down conversion on their first possession, on their second the Cougars got a 66 yard touchdown run from running back Dae’Shawn Penn to ignite the bench and home crowd. That was until the flags started flying for an illegal block in the back penalty against Patrick County, turning the 66-yard TD into a net gain of just 26 yards.

Three plays later Sprowl found Chris Drewery on a 27-yard pass for a touchdown to again go up 12-7, but the lead was short lived. The Buffaloes put together a 15 play drive that ended in a 12-yard touchdown from Avery Chaffin to Brady Chaffin to take the one point advantage.

Patrick County had just over 7 minutes to put together a game-winning drive starting on their own 31. They went 55 yards in 11 plays, but again failed to convert a fourth-down attempt, turning it over with just over two minutes to play.

“Unfortunately there at the end again we had a little breakdown in assignment and gave up the score right there with 7 or 8 minutes left in the game and that really hurt coming in, obviously,” Morrison said. “But we still thought we had a chance... I thought we drove it really well all the way down and just kind of stalled out there at the end. We’ve got some things that we definitely need to improve on and we’re going to make sure we fix some stuff going forward.

“We did not play to our potential any aspect of the game I thought. However the boys did show a lot of resolve and they came back and they fought hard in the second half, we just came up short. Unfortunately we just didn’t have our best game tonight.”

While the Cougars offense struggled, the defense did it’s best to keep the team in the game. Patrick County recovered two fumbles on the Buffaloes first two drives, and held them to just 26 yards rushing and 36 passing in the first half. Floyd ran just 19 offensive plays in the first two quarters.

The Buffaloes weren’t too much better in the second, running for 69 yards and passing for 30 on just three possessions, but it was the long scoring drive that took time off the clock and allowed Floyd to wear down the Cougars.

Patrick County held Floyd to 161 total yards of offense, compared to 307 by the Cougars.

Patrick County has just six seniors on a roster of 40 players. While the attitude and confidence the Cougars show on the field is unlike other Patrick County teams in the past, Morrison said there’s still steps to be made in simply learning how to win games.

The Cougars have just four wins over the last three years, and have never carried a late lead in a game against Floyd in that span, losing 27-7, 48-0, and 35-0. Learning how to finish games will take time, but the confidence Patrick County carries will help.

“The attitude comes from effort and work in practice,” Morrison said. “You cannot have confidence if you do not work and that’s the bottom line. Our boys have really been working hard and I think it shows in that attitude and that effort and also shows in the expectations.

“We’re still very, very young. I don’t think people understand how young we are... Being that we’re so young I think a lot of times it’s easy for our kids to maybe not understand just how to finish sometimes. They’ve never been in this position. It’s tough to put a 10th grade kid out there and be like, ‘Hey man, it’s time to win this ball game’ in a game that we’re up and maybe we can win this thing. But I think that these boys are maturing well beyond their years and I think moving forward we’re going to see a lot more good Patrick County football.”

Penn led the Cougars with 157 yards rushing on 23 carries. He has more than 400 yards on the ground in two games this season.

Sprowl was 2/5 passing for 56 yards and a touchdown, and added 14 yards rushing on six carries with one touchdown.

Fullback Carson Merriman had 18 carries for 66 yards, and Jonny Crowell had two carries for 14 yards.

Patrick County (1-1) will go back on the road Friday to Christiansburg (2-0). The Blue Demons have wins over Floyd County and Giles so far this season.