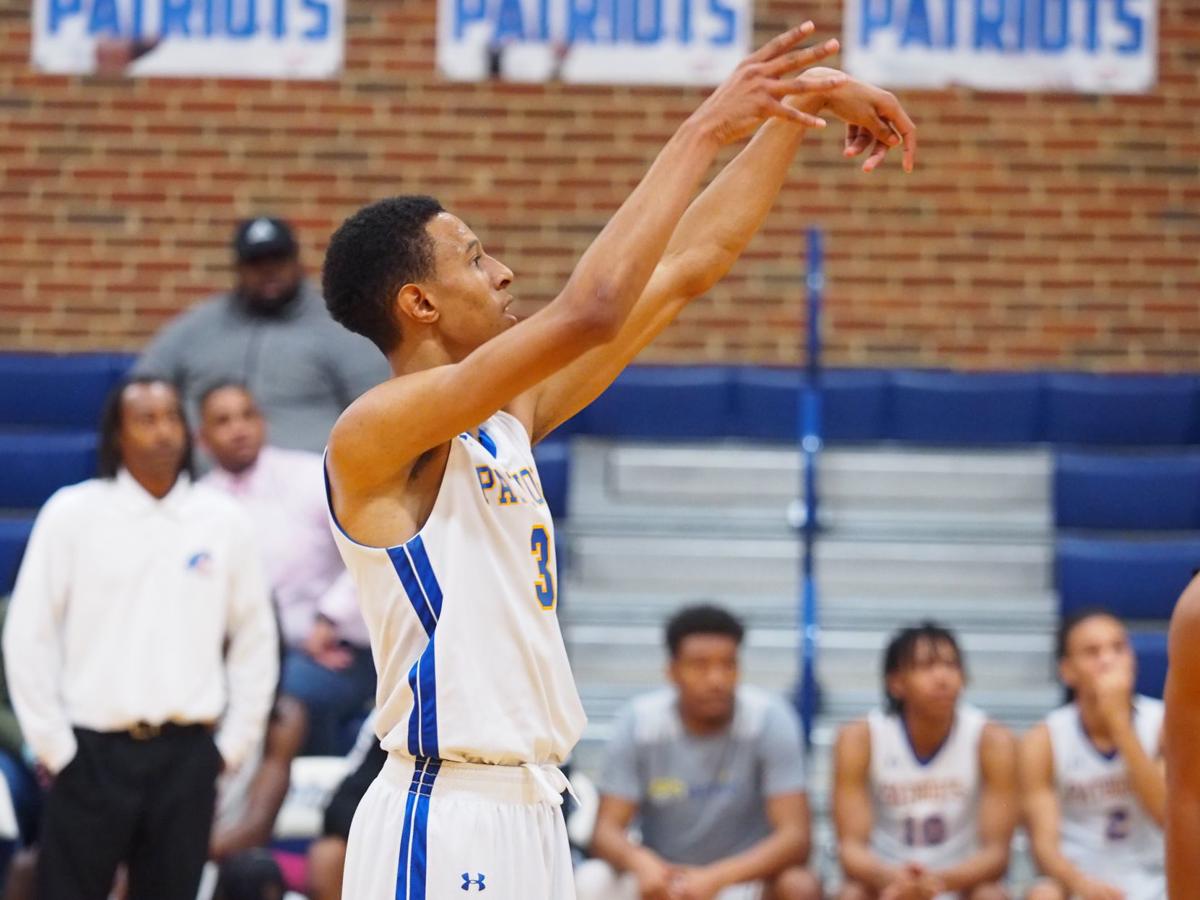 PHCC sophomore Justin Manns shoots a free throw during a recent home game against Hargrave Military Academy. Manns is averaging 15 points a game for the Patriots this season. 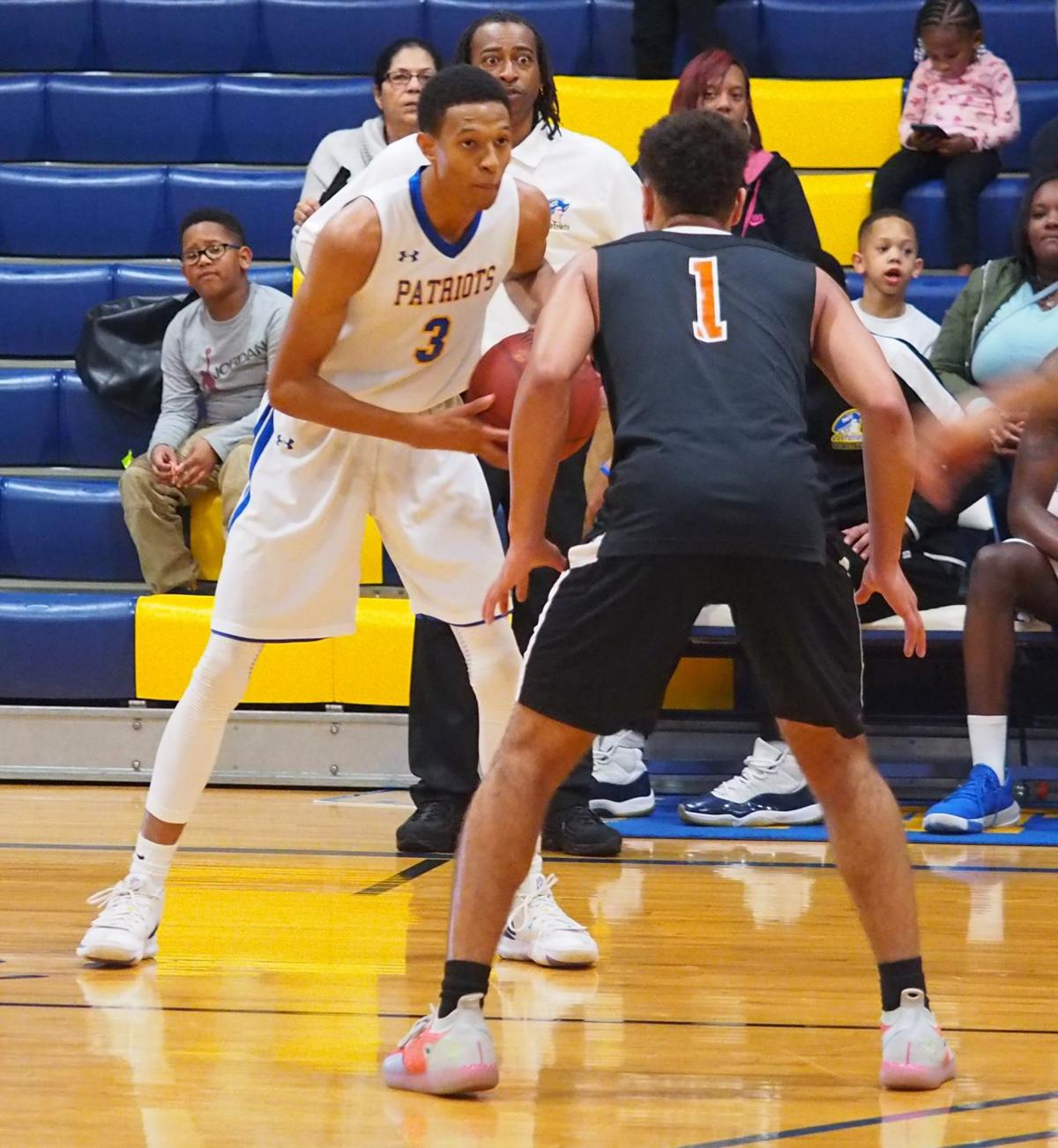 Justin Manns (seen above during a recent home game against Hargrave) scored a career-high 39 points in a game earlier this season.

PHCC sophomore Justin Manns shoots a free throw during a recent home game against Hargrave Military Academy. Manns is averaging 15 points a game for the Patriots this season.

Justin Manns (seen above during a recent home game against Hargrave) scored a career-high 39 points in a game earlier this season.

Justin Manns was a standout basketball player at Martinsville High School, and now the former Bulldog is becoming a standout player just down the road at Patrick Henry Community College.

On November 17, Manns scored a career-high 39 points in a game against Lenoir Community College. He followed that with a 20 point performance in a win a win over Guilford Tech, 17 against Hargrave Military Academy, and 26 to finish out 2019.

Manns leads the Patriots in scoring, averaging 15 points per game.

The former Bulldog was tasked by Patriots head coach Marcus Toney to be more of a leader on the court for his sophomore season at PHCC, and Manns delivered in a big way in his emotional 39-point performance. It was the most he’s ever scored in any game, at any level.

“Me and coach had talked about me being a leader… and what I need to do in order to lead us,” Manns said. “Basically, I’m in my home town so he told me I need to lead by example. That game, I had been going through some stuff. One of my best friends, Joey, had passed, maybe the week before. I had kind of been down the whole week so I guess all the emotions kind of came out that whole game.”

Manns said everything since that game has been a “humbling experience,” for him. He noted that he wasn’t known as a big scorer during his days at Martinsville, and his improvements this year show how much work he put in on the basketball court during the summer. He worked with local coach Chris Draper at the Martinsville YMCA throughout the last offseason, and Draper helped fix some of his miscues and with getting his shot off quicker, as well as off-the-dribble penetration.

He also came into his sophomore year with a different mindset than in his freshman campaign. Not only is Manns working to be a better leader on offense, but also on the defensive side of the ball. Which is easy for him given the coach he played for in high school.

“I came from a program with (Martinsville boys basketball coach) Jeff Adkins, that stresses defense a lot,” Manns said. “I’m trying to do the same thing and lead the team.

“I’m carrying pretty much a lot of what I learned in high school because sometimes we do play that 2-3 defense and it’s kind of the same things. Jeff Adkins, he kind of tweaked that a little bit more. But I added a lot more on defense. I’m pressuring my man full court most of the time, basically the whole game, so that kind of falls back into track. I’m glad that I did track to help me get me in shape for this. Pressuring my man full court isn’t easy the whole game but it’s sometimes you’ve got to do what you’ve got to do in order to help your team win, so that’s what I do.”

Manns ran track for the Patriots in the spring, and will again after this basketball season is over. While the opportunity to play two sports at the college level was a draw, it was actually former PHCC hoops coach Kenny Wade who brought the Bulldog to the college.

Wade, who passed away last September in a car accident, never coached Manns at PHCC, but the former coach’s legacy lives on in his recruit.

“What brought me to PH was Coach Wade,” Manns said. “I’m thankful for him for giving me the opportunity because some colleges didn’t give me a look. But I’m glad I did take this opportunity and I’m glad he gave it to me. So I’m playing for Wade at this point because he gave me the opportunity so I’ve got to take this and make the best out of it.

“I know the legacy that he left behind… so just bringing in a local kid from Martinsville, I’m just trying to carry on that local name.”

Manns is currently the only player for PHCC’s men’s basketball team from the local area, but he’ll be joined by fellow former Bulldog Aaron Martin starting in January.

“It’s going to be good getting back on the court with him,” Manns said of Martin. “Not only on the same team but in a different uniform playing in college. It’s going to be a very great experience for both of us.”

Manns has plans right now to transfer to Winston-Salem State University in the fall, though he said he’s keeping his options open if he gets offers to continue playing basketball or running track somewhere else. He wants to study physical therapy wherever he transfers.

The Bulldog has a few more things he’d like to accomplish with the Patriots in his hometown first, though.

“We want to put a banner on the wall. That’s the main goal,” Manns said. “Just coming to 2020 with the same mindset. Mentally and physically there’s a lot more work that needs to be done. So basically what we want to do is we want to finish out as regular season champions and hopefully we can get over the national championship and win that. Then back over to track, I actually want to try to make the best of that season because it’s also my last year so I just want to do something big not only for me but for this program and my family and everybody that looks up to me.”

The PHCC men’s basketball team will return to Stone Hall on January 9 with a home contest against Louisburg College at 7 p.m.