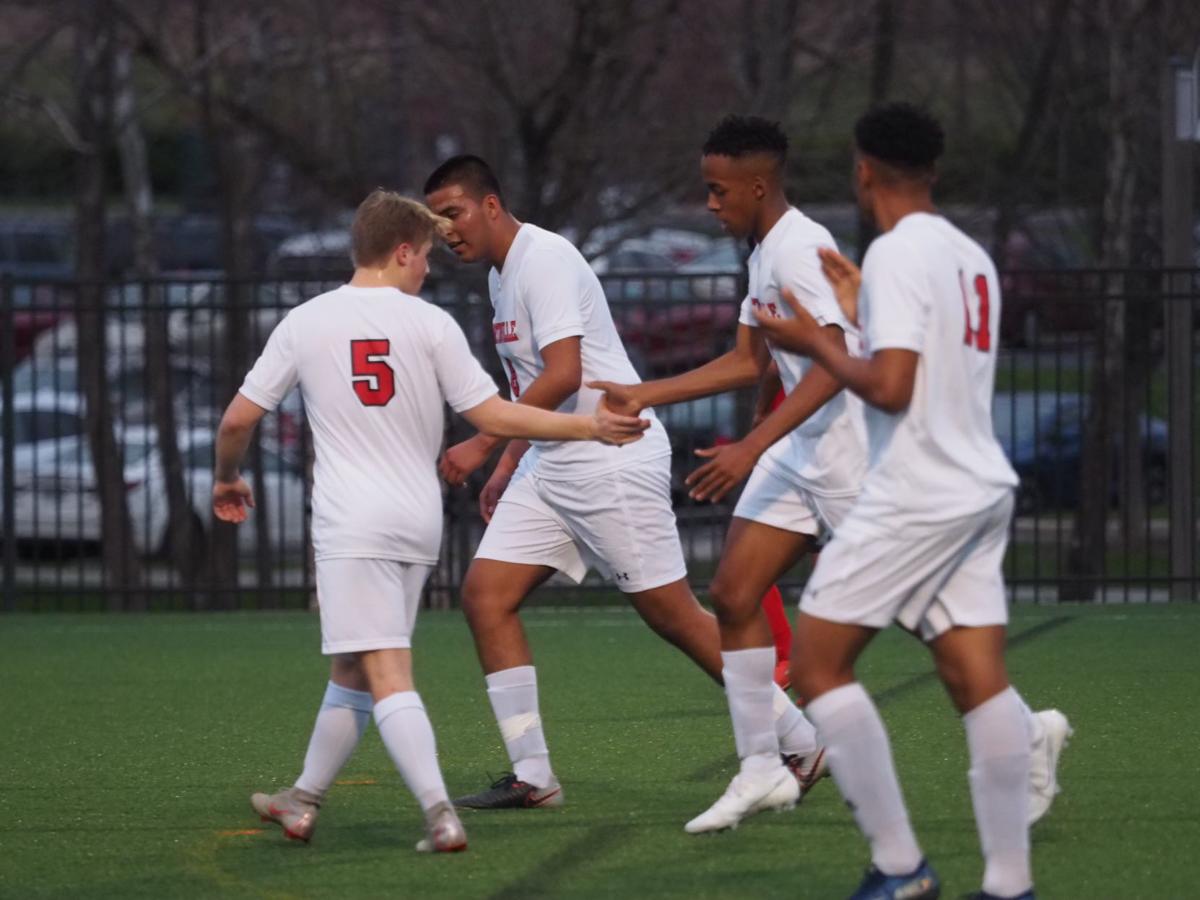 Martinsville's boys soccer team celebrates a goal during a scrimmage earlier this month. 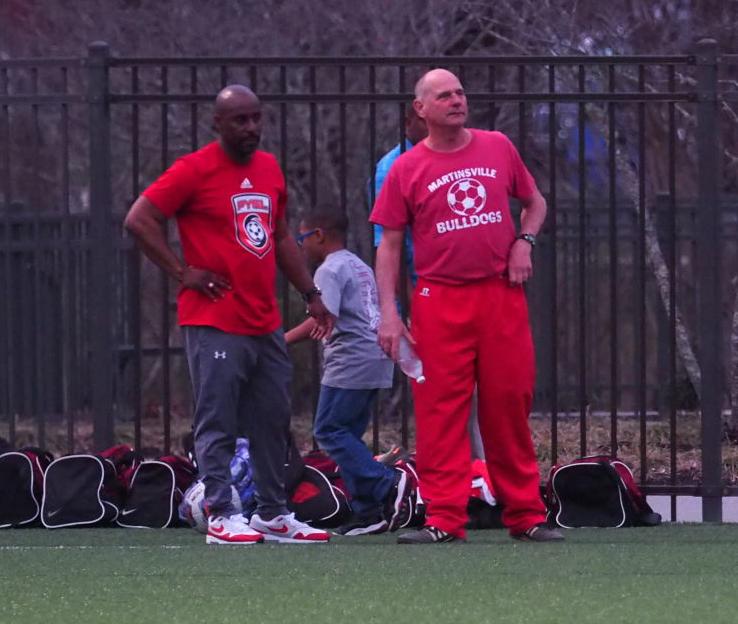 Martinsville's boys soccer team celebrates a goal during a scrimmage earlier this month.

For the first time in 33 years, Martinsville boys soccer coach Pete Scouras won’t be patrolling the sidelines this spring.

Scouras had to have a difficult talk with his team on March 13, the day it was announced Martinsville High School would be indefinitely suspending its spring sports season due to coronavirus concerns. A week later, the VHSL cancelled the entire season after Governor Ralph Northam closed all schools for the remainder of the academic year.

“We were ending practice and the assistant coach got a text that school was going to be closed for two weeks. No practice, no interaction, can’t come or do anything,” Scouras said by phone this week. “We always have a Bulldog-come-together as a team and yell out ‘team’ or ‘Bulldogs’ or ‘family’ and all that stuff. And I told the guys, ‘Let’s hope this is not the last one.’ And I truly did not think it would be. But turned out that was the last one that we’ll have as that team.”

So what will a soccer-free spring look like for Scouras, the only boys soccer coach Martinsville High School has known for the last three decades?

“It really hasn’t sunk in I guess,” Scouras said. “I don’t know. I don’t know what to do when March and April nights come and I’m not at Dan Green or somewhere else preparing for our game. I guess it will sink in eventually but right now it’s just kind of a different thing. Thirty-three years is a long time.”

The Bulldogs were coming off of the best season in school history, going undefeated through the regular season, and winning the Piedmont District and Region 2C tournaments. Their only loss came in the final game of the season in the state semifinals. It was a record breaking year Scouras said his current crop of seniors were excited to try to replicate.

Martinsville had eight seniors on this year’s team – six returners and two newcomers. Scouras could see the work each one had put in to try to get back to the state final four.

Work like that of senior co-captain Tanner Ingram, a sometimes-starter last year. The Bulldogs found a ton of success last season off of incredible flip-throw-ins by graduated senior Wilson Bowles. Scouras said he never thought anyone would be able to duplicate that, but Ingram worked all offseason to prove his coach wrong.

“After Wilson graduated, I told everybody, ‘We’ll never see that again.’ Well I guess Tanner took heart in that and he said, ‘I’ll show coach,’” Scouras said. “And daggone it if he didn’t go and learn how to do that flip-throw. And he could do it just as well as Wilson. That was going to kind of be a surprise. We kind of hid that under the rug. ‘They can’t have somebody two years in a row that does that.’

“He worked on it, being an athlete, the gymnast that he is, a diver, he’s a great athlete. And he told me ‘coach, I’m going to try.’ … I know the few weeks we had together to practice, he had the distance and everything. He was slinging that thing and putting it in the spots and everything. I hate it for him.”

Scouras mentioned all eight of his seniors while talking with the Bulletin this week, knowing that each would have had an impact on his squad this season:

Daniel Argueta: “He came out, he was showing promise. A first year player, a football player. He had been working hard, coming every day. I hate he didn’t get to show anything.”

Saul Devora: “He worked his way up. Did well last year and was a captain. The kids named him senior captain and I was looking for big things out of him. He really worked hard and that’s a shame for him.”

Clarck Givens: “He worked hard, he earned a starting position. He was a reserve for us last year. He was going to be a solid player in the back for us... I was looking for good things out of him. He was a hard worker, just a great kid and player. He doesn’t get to show what he can do. He played really well in the scrimmage.”

Jordan Penn: “A forward, he’s so fast. He’s like a rat in a shoebox. He’s everywhere. He scored on a header in a scrimmage. He was looking like he wanted to do well. He’s cut short.”

Carlos Telles: “He had been working hard and was going to get really good time probably as a reserve. He was looking good.”

Alonso VazQuez: “He came up through and was working hard and decided he wanted to play and work and try. He was going to get a lot of time playing defense in the back.”

Scouras said he and the Bulldogs’ coaching staff knew their team was good and deep, with no fall off when going to their bench. They were also excited to see the hard work the team had put in play out on the field.

Now, Scouras is teaching his team more than just soccer. He’s taking solace in the fact that it’s not just his players affected by the cancelled season, and making sure they learn from this experience.

“We’re not by ourselves. It’s everybody,” he said. “It’s not just soccer, it’s college, it’s NBA, it’s NASCAR, it goes on and on. It’s just crazy. You can’t go against what people tell you to do for sure because then it just makes it worse.

“I’m just disappointed that there’s not going to be any more Bulldogs this season, a group coming together and doing what the kids like to do and we like to do as coaches… but you’ve got to understand, and I told the kids that day when we got the announcement, they were really just upset because as hard as they worked, they played all season, played in the fall, played some travel, and running and weight room and things. I said ‘guys, you’ve got to think, it’s a growing thing.’ I tried to talk to them about that too.

“A lot of them haven’t had any kind of adversity or any kind of setback. It’s just that’s part of life and we can use it, hope they can use it maybe as a growing thing as young men. That’s what I hope for them. All of the guys, but especially the seniors. Sometimes life doesn’t go like you want it to go. You can’t run from it.”

Scouras said when the time is right and it’s safe he and the coaching staff will come up with a way to honor this year’s seniors, saying there’s needs to be “something to take from this crazy, crazy time.”

Not seeing Scouras on the sideline of the soccer fields at Martinsville High School is certainly crazy.

“All my students at school, you’re part of them and they’re part of you and you don’t get to see them. It’s just going to be different,” he said. “It’s just uncharted waters... You’ve got to take it as it comes I guess and hopefully feel like the sun will come up tomorrow and let’s hope it does and go from there.”

More in COVID-19/coronavirus daily update from the region, state, nation and world: March 27 (9 of 15)