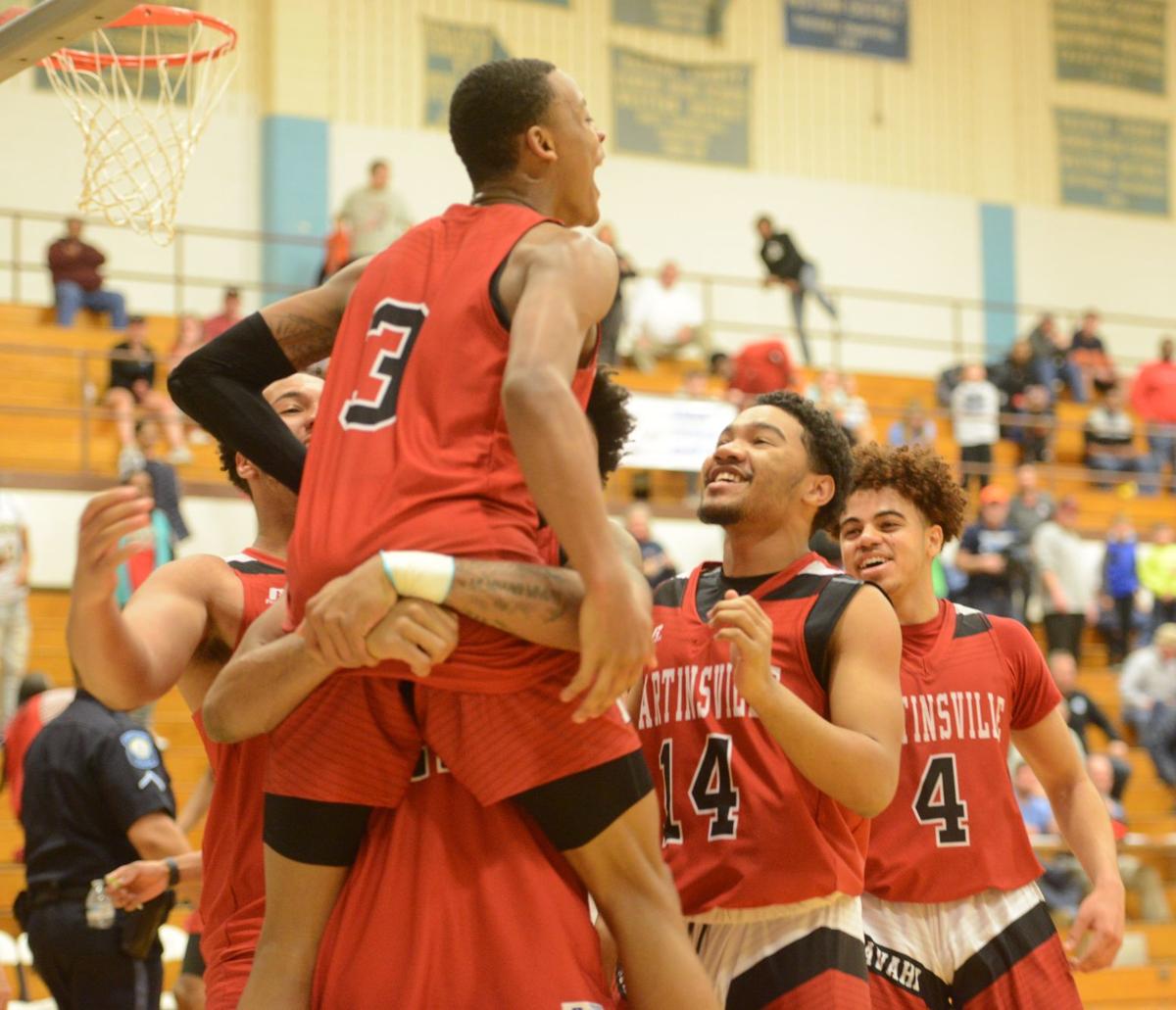 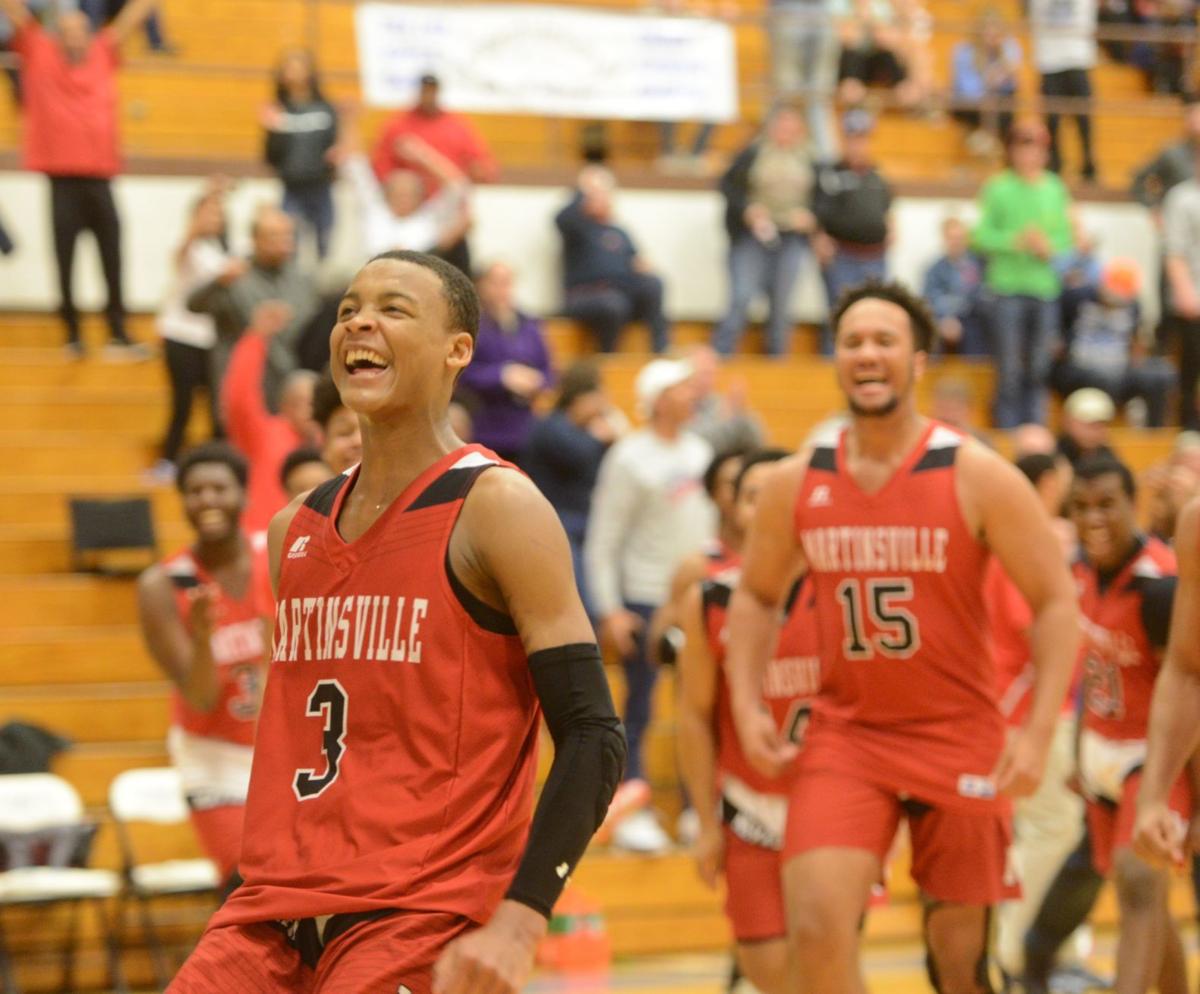 One night after Troy Brandon scored 30 points to lead the Martinsville boys basketball team to a lopsided win at G.W.-Danville, the senior guard hit the game-winning 3-pointer Tuesday in a much tighter affair, 45-44, at Halifax County in the Piedmont District Tournament championship game.

Halifax County’s Kameron Roberts hit a long two-point jumper to give the Comets a 44-42 lead with 38 seconds remaining in the fourth quarter, and after a timeout, Brandon’s first attempt at a tying shot in the lane missed. But he forced a jump ball on the rebound, and the arrow ruled in favor of the Bulldogs.

On the ensuing inbounds play with 6 seconds left, Brandon passed to Jeremiah Law in the right corner, then raced out to the right wing where Law found him. Brandon lofted the shot into the air and found the bottom of the net with just 1.8 seconds remaining for the last of his seven points of the evening.

“Jeremiah can pass the ball very well. We’ve been playing for a while now,” Brandon said. “So whenever he passes the ball it’s always in my pocket and I’m ready to shoot. It was all just a matter of getting the ball out of my hands real quick.”

A last-second shot from Halifax County’s Kevon Ferrell clanged off the rim, giving Martinsville its first Piedmont District Tournament championship since the tournament was reinstated three years ago.

“It’s hard to beat G.W. on the road and Halifax on the road back-to-back, and we did it, so I’m very proud of the kids,” Bulldogs head coach Jeff Adkins said.

Roberts led the Comets with 16 points, and Ferrell backed him up with 13.

The Bulldogs are now off until they open play in the Region 2C tournament at home on Tuesday of next week.

Martinsville junior forward Jahiem Niblett scored just four points against G.W. on Monday, but he bounced back with a game-high 18 against the Comets. Lemuel Jones tallied 10 points in the win, Law added six and Jahil Martin supplied four to complete Martinsville’s scoring.

Halifax County entered the fourth quarter ahead 33-30, and Martinsville went to Niblett on nearly every possession—looking for him to back down defenders in the post as opposed to driving into the lane, which Adkins said is more difficult against the long and athletic pack-line defense that Halifax County plays.

“He can make shots when he’s under control, and they couldn’t stop him for a while,” Adkins said.

Niblett matched his scoring output from Monday by the end of the first quarter on Tuesday, but the Comets led 10-6 after the opening eight minutes.

Niblett had Martinsville’s first six points of the second quarter and a jumper at the end that tied the game, 22-22, going into halftime.

“Once you hit a good shot, you get your confidence,” Niblett said. “Mentally, you can’t lose your confidence. You keep shooting. You’re bound to hit one or two.”

Both teams struggled for points in the third quarter, with the Comets outscoring the Bulldogs 11-8.

In the fourth, Niblett scored on consecutive possessions to get Martinsville within one, 35-34. Martin added a put-back layup off a Niblett miss on the next possession to take a 36-35 edge.

Roberts and Niblett then traded jumpshots, and the lead, and Halifax County’s Keshawn Wells hit a layup for a 39-38 advantage. Brandon hit two free throws, and Roberts then converted a three-point play, making it 42-40. Law answered with a banked-in jumper from the foul line, but Roberts came back with his final shot with 38 seconds left—setting up Brandon’s late heroics and Martinsville’s eventual celebration.

Parker Cotton is a sports reporter at the Martinsville Bulletin and Danville Register & Bee. You can reach him at (276) 638-8801 ext. 215. Follow @ByParkerCotton