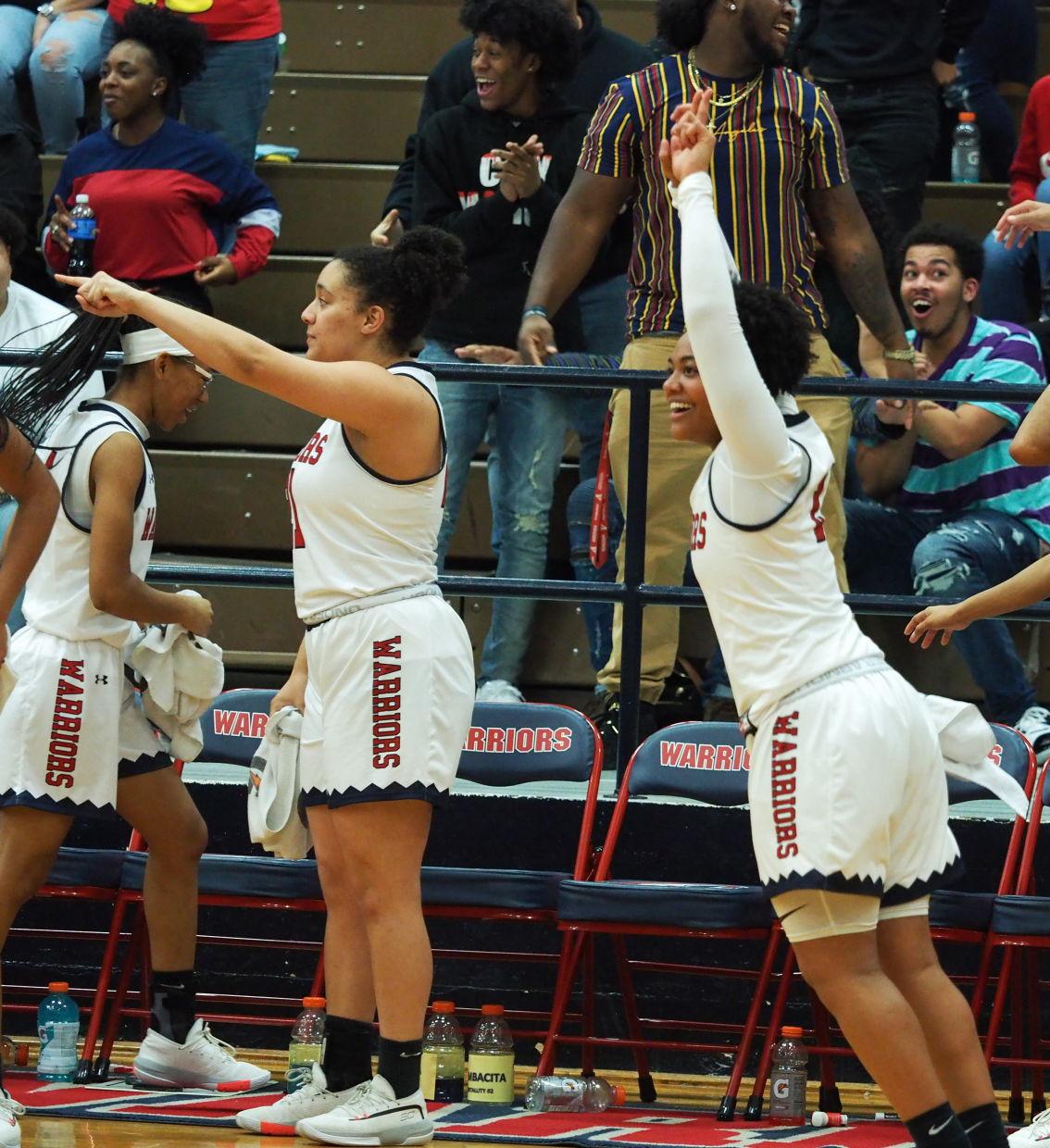 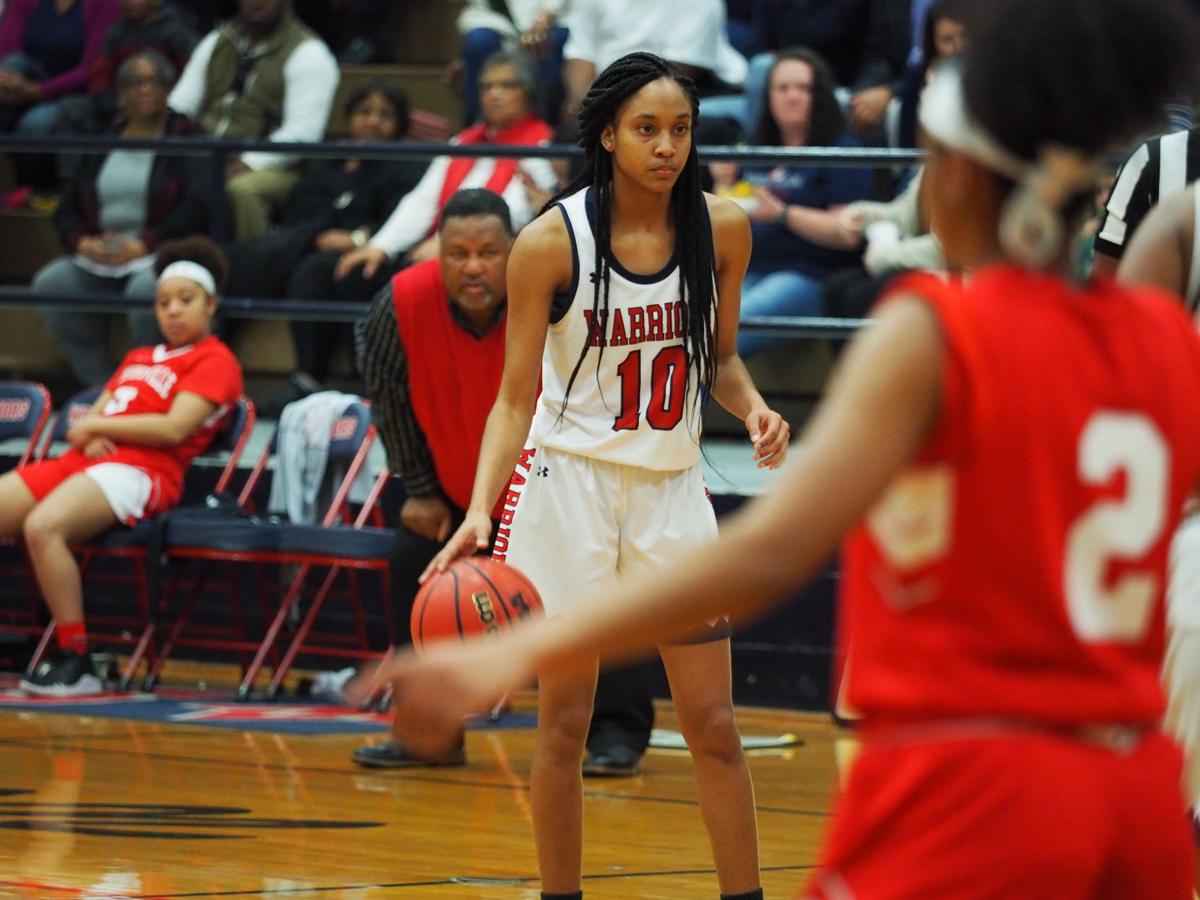 Magna Vista's Mackenzie Hairston dribbles up the floor during Saturday's win over Martinsville in Ridgeway.

Magna Vista's Mackenzie Hairston dribbles up the floor during Saturday's win over Martinsville in Ridgeway.

Magna Vista coach Kyana Smith has said before that when her team needs a point, they know to go to sophomore TaNashia Hairston to get it.

Saturday afternoon at home against Martinsville, the Warriors needed at least three points. Hairston got them six.

Trailing the Bulldogs 37-34 with less than a minute left in the game, Hairston knocked down a 3-pointer from the left-center side of the court to tie the game. Hairston then grabbed a rebound on the other end of the floor, drove the length of the court and put in a contested layup with 20 seconds left on the clock. She finished by knocking down her ensuing free throw for her 28th and final points of the night.

The Warriors held off Martinsville the rest of the way for a 43-37 victory.

“I don’t know. I was just trying to get us back in the game. I was just amazed by how I made it,” Hairston said of the 3-pointer. “I didn’t think it was going to go in. It was last minute so I just had to throw up something, hoping that it went in for me and my team to get the win.”

Hairston’s 28 points were a game-high. No one else on her team scored more than five.

“They had played man on me almost the whole time, so I just had to come out and give it my all and not give up for my team,” she said.

“The play at the end, we drew it up, and that’s something we don’t really do well is stuff on the fly but TaNashia, just she made a big shot,” said Magna Vista coach Kyana Smith. “We needed it. We missed some open shots throughout the game and things kind of weren’t going as well as they usually do sometimes for her offensively, but when it counted, when we needed it she came through.”

Magna Vista struggled to hold off a fearless Bulldogs squad that came back from a 23-14 halftime deficit. In the final minute of the third quarter, Martinsville’s Ciara Valentine knocked down a 3-pointer and another long 2-pointer on back-to-back possessions to cut into Magna Vista’s eight point lead. The Bulldogs finished the quarter with a steal by Leighton Jamison, who found Janyia Benton under the basket. Benton missed the layup, but made both her free throws to take Martinsville into the final quarter down 28-27.

The Bulldogs outscored Magna Vista 13-5 in the third.

After both teams traded baskets for the early part of the third, Martinsville took its first lead after NaKieyah Hairston tied the score on an offensive rebound and putback, then hit a free throw on the next possession to go up 35-34.

NaKieyah Hairston again found an offensive rebound on the next possession, and again put it back in to give the Bulldogs a three point lead with 1:45 on the clock.

“We didn’t have a good first half but in the second half, this team, I told them in there they showed heart, they’ve got guts,” said Martinsville coach Charlie Holland. “But the thing of it is when the game gets on the line we’ve just got to learn what’s a good shot and what’s bad shot… We took a couple of shots that I didn’t want to take. They’ve got to understand the “T.S.S.” – time, score, and situation. We should have dribbled the ball back out and ran some time off the clock.

“Overall I was satisfied with the way we played but I just wasn’t happy with some of the decisions in the last minute of the game.”

Magna Vista had to play the final minutes without senior Mackenzie Hairston, who fouled out just before TaNashia Hairston’s 3-pointer. Smith said that forced her team to make adjustments without the player she called their top defender.

“Honestly, they showed a lot of resiliency in the face of adversity,” Smith said. “It’s no secret she’s (Mackenzie Hairston) probably our best defender and we were down, we were kind of looking for that defensive play from her but we stepped up, other people did.”

“When they came back we were under pressure and we didn’t know what to do with the ball so we kept throwing it away and we just got out of control with the ball,” TaNashia Hairston said. “The atmosphere, it was loud and that took over us too, but when we got back in the huddle we told each other to calm down and just get our heads back in the game and leave it all on the court.”

“This is only going to make us better playing in front of this crowd. The type of teams we play in the Piedmont District, there’s no teams in our region that good,” Holland said.

“I think we’re growing up… We played with seven people today, sometimes we play with six, but these girls have been sitting on the bench the last three years. Now I’m asking them to lead from the front. I think we’re doing a good job. Magna Vista, they don’t do stuff to beat themselves. They’re well-coached. I think they’ve got a few more people that have more experience than we do. I think this is going to set us up for the district tournament and the regions.”

Magna Vista extends its current winning streak to 12 games, improving to 14-1 with four regular season games remaining. The Warriors will return home on Tuesday for a 7 p.m. contest against Patrick County.

Martinsville falls to 15-7 on the year. The Bulldogs will return home on Friday to take on G.W.-Danville at 7 p.m.