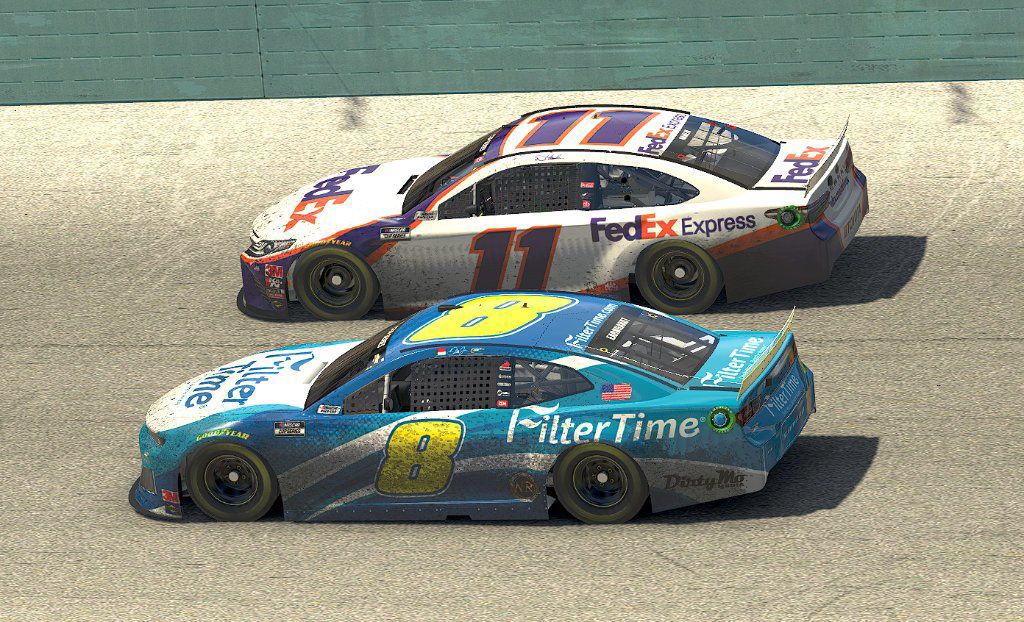 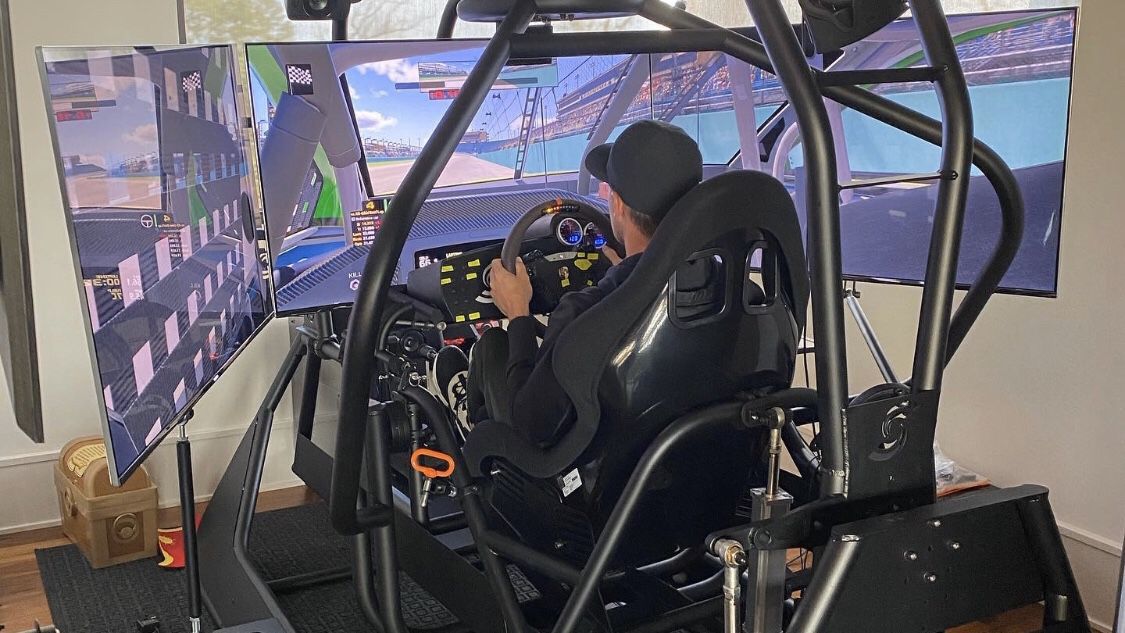 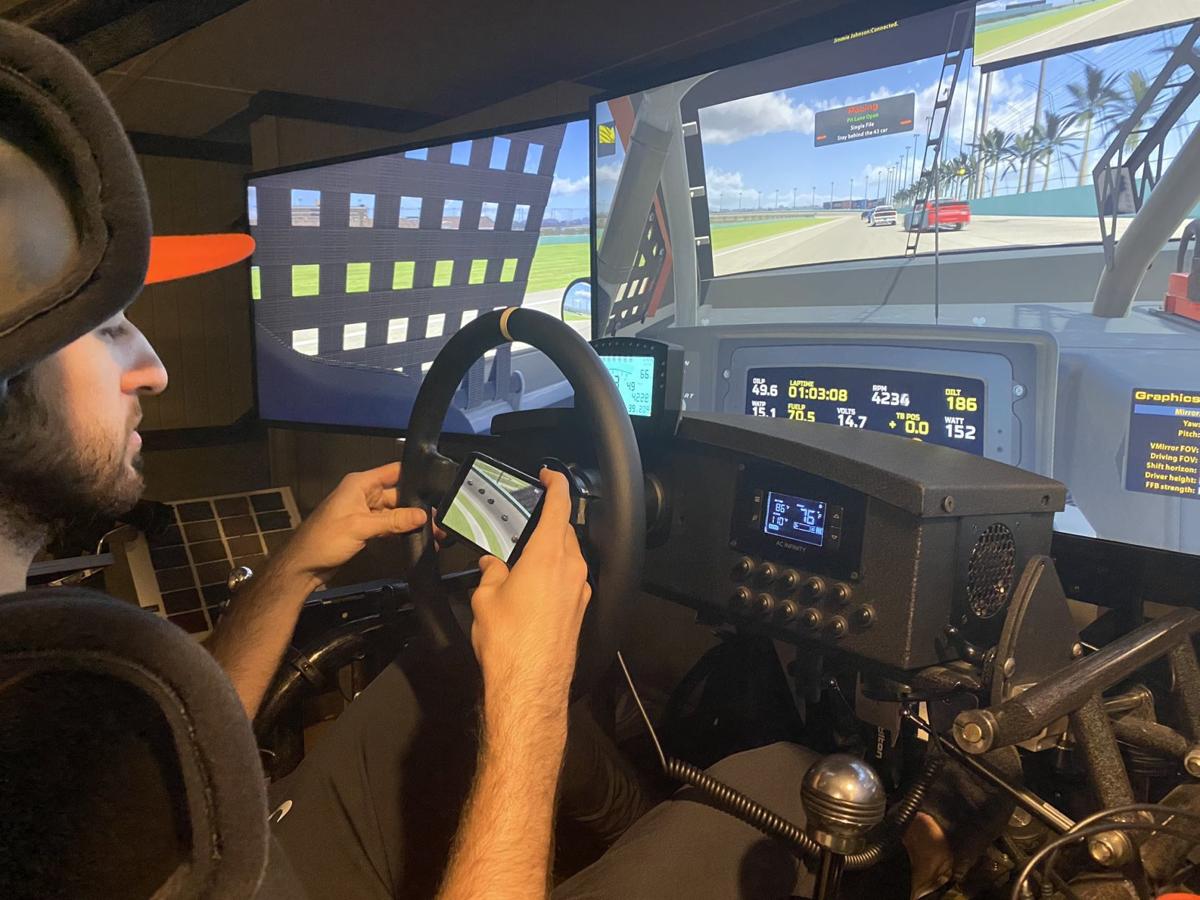 In this photo from Twitter, Chase Elliott watches the TV broadcast of Sunday's eNASCAR iRacing Pro Invitational Series race during a caution while competing in the race. Elliott finished the day 26th.

In this photo from Twitter, Chase Elliott watches the TV broadcast of Sunday's eNASCAR iRacing Pro Invitational Series race during a caution while competing in the race. Elliott finished the day 26th.

No, this isn’t a story from five years ago. Hamlin hasn’t won at the real Homestead-Miami since 2013.

But on Sunday he picked up a victory at the virtual Homestead-Miami, and he did so while barefoot.

“I like feeling the pedal,” Hamlin said in a press conference following his win Sunday. “With shoes I just can’t do it. I always go barefoot.”

Hamlin won Sunday’s inaugural eNASCAR iRacing Pro Invitational Series, the first in a series of virtual races to take place over the next seven weeks while real NASCAR races are postponed due to coronavirus concerns.

While drivers on Sunday’s typically battle the elements like rain or extreme heat, drivers this Sunday battled elements of their own. In the middle of Hamlin’s day he asked his daughter to bring him a soda, but her excitement shook the bottle and it exploded on him upon opening. A sticky situation for the driver who said his iRacing rig cost “probably in the 40-range.”

But he was unfazed. After a race that saw more than a half dozen cautions in just 100 laps, Hamlin got side-by-side with Earnhardt coming off of Turn 2 on the final lap, and he bumped into Earnhardt coming around the final turn to push his way across for the win.

“Yeah, definitely,” Hamlin said when asked if he would pull a move like that in a real race. “I wanted the bottom, and he (Earnhardt) was really, really smart to… kind of block the bottom there because the bottom lane at Homestead on iRacing just has tremendous more grip than the lane I was running in, but I knew that the difference in the two lanes was about a tenth-and-a-half to 2-tenths, and I thought my tires were about 3-tenths better. So I thought as long as I got beside him I was going to be able to complete it, even though he was in the preferred groove.”

Hamlin was one of more than 20 Cup Series regulars who raced on Sunday, though he said none of them felt obligated to do it. Drivers had been iRacing against one another so much anyway thanks to their own race shops being shut down it was a natural progression from the individual races to the TV broadcast. Sunday’s race was shown on FS1.

During a time when live sporting events have been so few and far between, the race was a hit, trending as one of Twitter’s top topics in the United States during the afternoon.

Hamlin said his hope is that new fans itching for any sort of sports content would see Sunday’s race and possibly turn into new NASCAR fans.

“If we got five new fans that were just sitting at home watching TV today that thought it was exciting and is willing to tune in next week or willing to tune in to a NASCAR race or go to a NASCAR race because they got introduced to racing today by iRacing it’s a success,” he said. “There’s no number that makes it a success. If you made positive gains in your audience, whether it be one person or 1,000, it’s a good thing.

“Although NASCAR has its struggles at times for the regular fan to go out and simulate a game-winning shot or game-winning pass, iRacing has given them that platform, and there’s no other sport, NBA players can’t go play NBA2K and put it on TV and make it look like the real thing. You can’t go play Madden and make it look like the real thing… But iRacing’s platform, this is something that really can gain a lot of traction simply because it’s as real as it gets.”

Fans, too, were able to see a different side of drivers during the races. Some race teams had online livestream videos of individual drivers simulcast with the TV broadcast. Chase Elliott’s “crew chief” for the day was fellow driver Ryan Blaney, who provided video updates on social media judging Elliott’s performance. Hendrick Motorsports driver Alex Bowman joked on Twitter about letting his dog drive for a couple of laps, posting photos of the pup in the driver’s seat while blaming him for a late-race crash.

Bowman said on social media following the race it was “probably my favorite thing I’ve ever done.” He finished the day sixth. Elliott finished 24th.

The iRacing Series is scheduled to run through the end of the NASCAR break, with real racing returning on May 9 for the Blue-Emu Maximum Pain Relief 500 at Martinsville Speedway. Whether the appeal of virtual races wears off over the next month is hard to say, but for now NASCAR is giving fans a taste of competition in any way they can, and fans are enjoying the experiment.

“I’m excited we’ve got people reenergized and got people talking about racing again. That’s all pretty important,” Hamlin said. “A month down the road, who knows, but certainly I think it’d be a great thing to keep it going and get people excited for the real season when it kicks back off in early May.”

Broadcast info for next week’s and the remaining races will be announced at a later time.