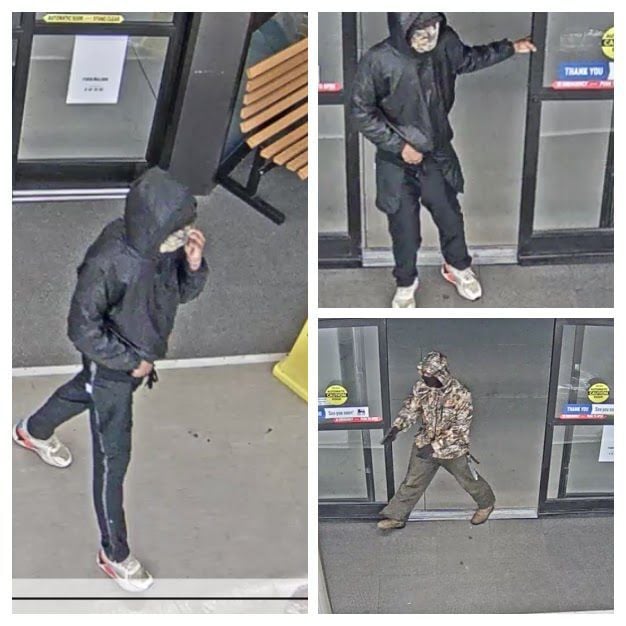 These surveillance photos were taken during a robbery at the Food Lion in Stanleytown on Monday night. 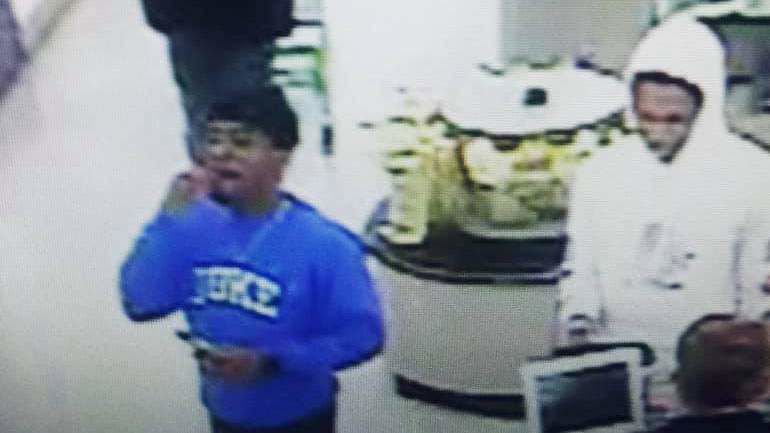 These two men are described as "persons of interest" seen in the Dollar General Market in Collinsville on another day after the robbery occurred there.

These surveillance photos were taken during a robbery at the Food Lion in Stanleytown on Monday night.

These two men are described as "persons of interest" seen in the Dollar General Market in Collinsville on another day after the robbery occurred there.

Two men robbed the Food Lion at 951 Fairystone Park Highway in Stanleytown of an undisclosed amount of money on Monday night.

The men had guns when they entered the store at 11:49 and demanded the employees give them money. They fled on foot, a release from the Henry County Sheriff’s Office said.

Deputies arrived approximately one minute later but could not find the robbers. A K-9 dog led deputies to where they believe the men got into a vehicle and escaped.

This is the third similar robbery in Martinsville and Henry County this month and the fifth in the region.

“At this point we are confident in saying the robberies [in Martinsville and Henry County] are connected,” HSCO Capt. Wayne Davis said.

He said his department is working with the Rockingham County Sheriff’s Office and the Danville Police Department, who have had similar robberies of their own.

But an alarm went off, and the men fled.

Martinsville Police Chief Eddie Cassidy said the two men demanded cash from a cashier at the Neighborhood Market. One man indicated he had a gun in his pocket, and the men fled on foot with an undisclosed amount of cash.

In the Dollar General Market robbery in Henry County, Davis said, the men were “heavily clothed.” One man was wearing a mask and gloves, and both men “brandished a handgun.”

The clerks handed the men an undisclosed amount of money, and the robbers fled on foot. The clerks said both men looked like they were in their early 20s, just taller than 6 feet and of thin build.

At the Family Dollar in Wentworth, both men had handguns when they went in demanding money from the store employees. The robbers were wearing hoodies, masks and gloves and left with an undisclosed amount of money in what was believed to be a small pickup truck.

At the Food Lion in Danville, the store had just closed when two masked men wearing long coats forced employees back inside. One robber brandished a firearm and ordered an employee to open the safe. Before the safe was opened, an alarm sounded, and the robbers ran from the store.

At the Food Lion in Stanleytown, the men were described as heavily clothed, wearing masks, slightly taller than 6 feet with thin builds.

In all cases, no one was injured while the crimes were being committed.

Security-camera footage shows the two robbers to be wearing similar clothing in all five robberies.

The Henry County Sheriff’s Office has released a photo of two men Davis says were recognized as possibly being the robbers.

“They were seen in the Dollar General in Collinsville on another day after the robbery occurred,” Davis said.

The two men are described by Davis as being “persons of interest” and he is asking for the public’s help in identifying them.

Anyone having information regarding these robberies is asked to contact the Henry County Sheriff’s Office at 276-638-8751 or Crimestoppers at 63-CRIME (632-7463). The Crimestoppers Program offers rewards up to $2500 for information related to crime. The nature of the crime and the substance of the information determine the amount of reward paid.