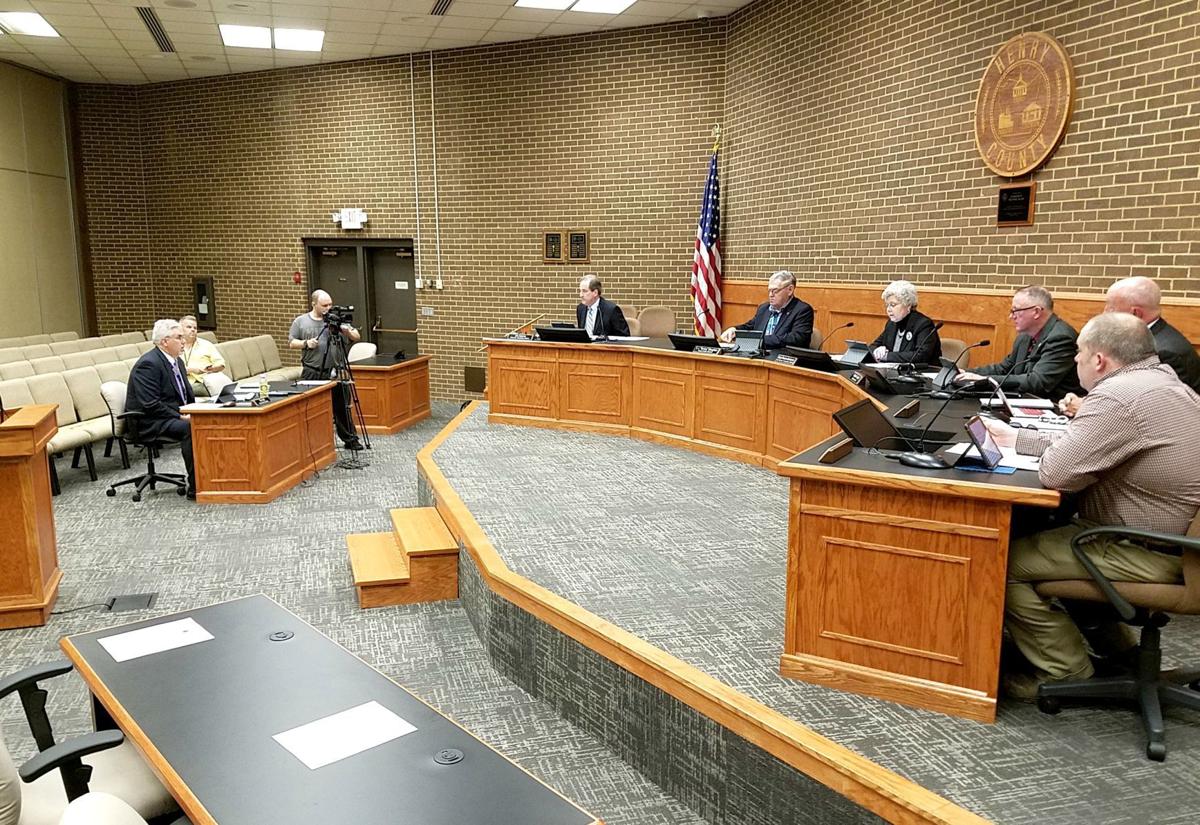 Henry County Administrator Tim Hall (left) addressed the Board of Supervisors from a different seat than usual Tuesday. As a health precaution, the meeting was held with spread-out seating arrangements and only a skeleton crew of staff in the room. 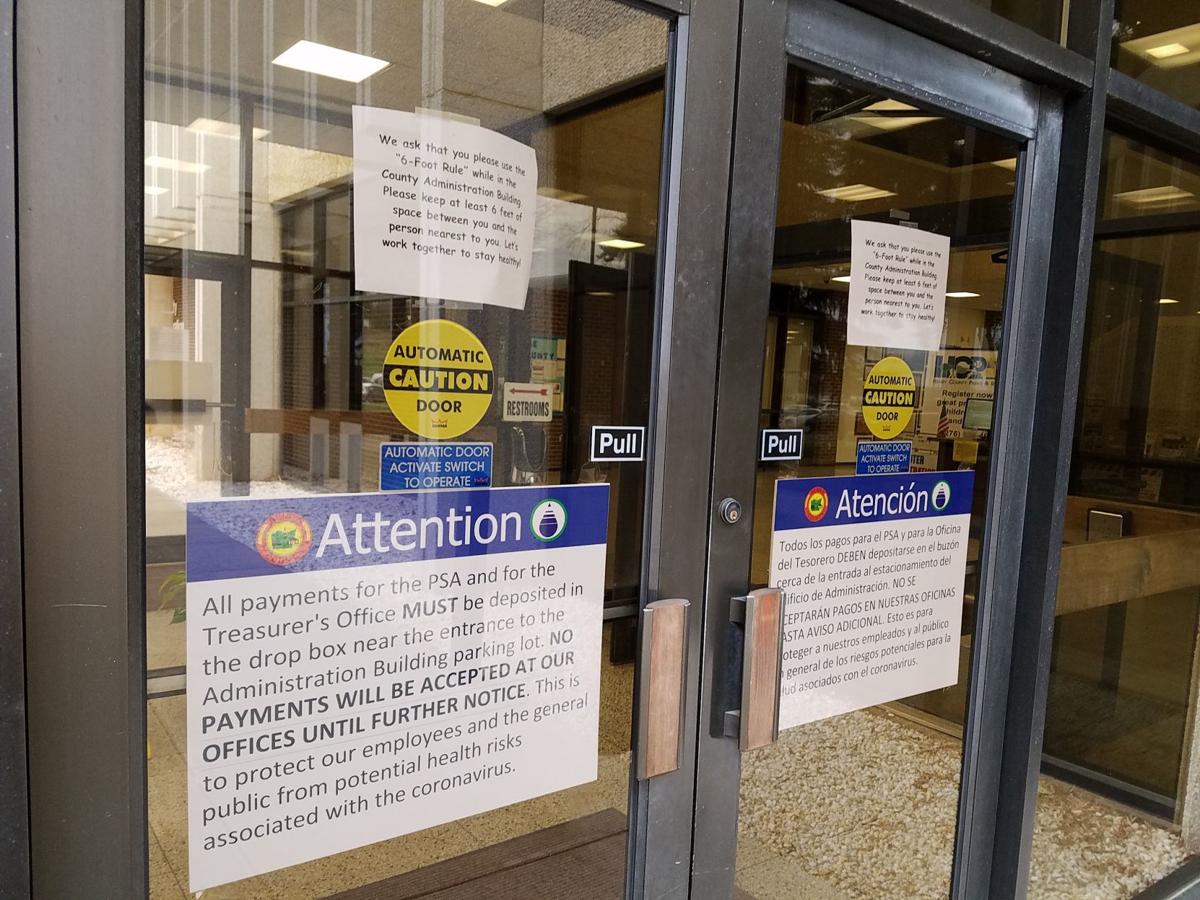 Signs of the times: Posters on the doors to the Henry County Administration Building announce the closure of all payment windows to the public this week due to coronavirus precautions. The county is encouraging customers to pay their bills online, by phone, mail, or using drop boxes in the parking lot instead of visiting the building in person. 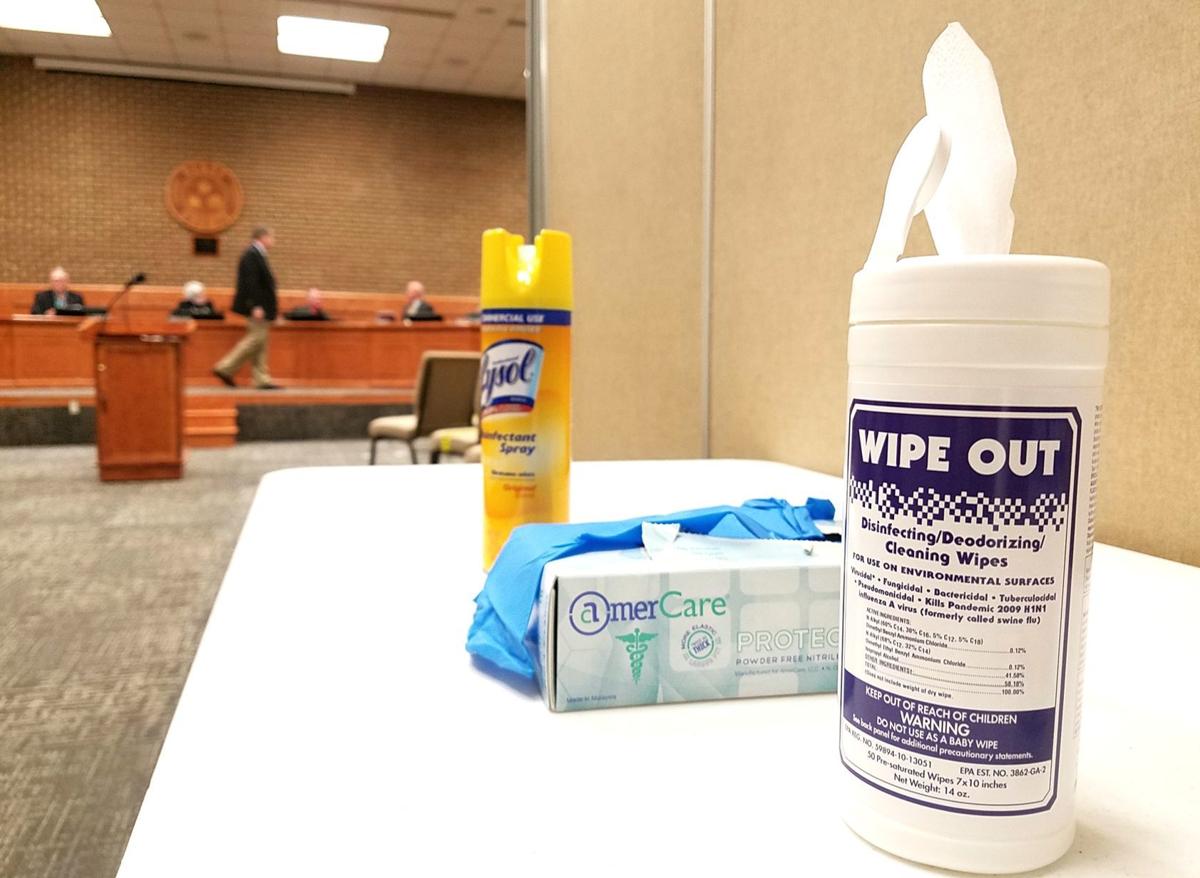 Hand sanitizer, protective gloves, and antibacterial spray greet attendees of the Henry County Board of Supervisors meeting on Tuesday. The board met as scheduled but took extra health precautions due to the pandemic, including limiting attendance and changing the seating arrangements to promote "social distancing."

Henry County Administrator Tim Hall (left) addressed the Board of Supervisors from a different seat than usual Tuesday. As a health precaution, the meeting was held with spread-out seating arrangements and only a skeleton crew of staff in the room.

Signs of the times: Posters on the doors to the Henry County Administration Building announce the closure of all payment windows to the public this week due to coronavirus precautions. The county is encouraging customers to pay their bills online, by phone, mail, or using drop boxes in the parking lot instead of visiting the building in person.

Hand sanitizer, protective gloves, and antibacterial spray greet attendees of the Henry County Board of Supervisors meeting on Tuesday. The board met as scheduled but took extra health precautions due to the pandemic, including limiting attendance and changing the seating arrangements to promote "social distancing."

Drive-through COVID-19 testing centers are in the works for Henry County, thanks to efforts by a local pandemic response team of government, medical providers, schools and nonprofit partners.

“There are a lot of folks working very hard on this every day,” including the United Way and Sovah Health, Henry County Administrator Tim Hall told the county Board of Supervisors earlier this week.

The testing centers “are not up and running now. There are some logistical things being determined right now about where we will set those up,” Hall said. Once they begin operations, he said, testing will require a doctor’s referral.

Emergency preparations for the novel coronavirus took up much of Tuesday’s meeting of the Henry County Board of Supervisors. The board voted unanimously to authorize the local state of emergency declared by Hall on March 16, a move that gives officials more freedom and flexibility to respond to issues associated with the pandemic. The declaration is required to access certain pots of disaster relief funding.

Along with plans to contain the virus from spreading, officials discussed efforts to stop a different contagion — rumors and misinformation.

As of Thursday evening, Virginia Health Department statistics show there have been zero confirmed cases of COVID-19 in Martinsville or Henry County.

Hall cautioned that cases of the novel coronavirus “are not official unless confirmed by the health department” and urged people to use credible sources of information. If and when the virus is confirmed locally, updates will be posted on the local COVID-19 webpage operated jointly by the county and city governments at www.henrycountyva.gov/covid19.

“If anyone has a question about what we’re doing or what the state is doing, it’s all on that website,” he said. “I would encourage people — do not believe what you hear just because you hear it.”

The page is updated frequently with the latest local closings and public health mandates, as well as resources about the virus from the state health department and Centers for Disease Control.

Supervisors on Tuesday also approved a continuity of government ordinance that identifies the public officials authorized to make decisions to address the pandemic.

“The pandemic is presenting legal and logistical problems that we have never faced as public officials,” Henry County Attorney George Lyle wrote in his introduction of the draft ordinance.

He recommended its approval “as the county could conceivably be faced with requests for quick responses from state and federal officials for help with everything from mandatory quarantines, to distribution of supplies, to enforcement of federal and state regulations local officials normally don’t enforce.”

At this time, there is no indication any of these developments will come to pass, but the ordinance positions the county to respond quickly. With so much rapidly changing information and public health mandates coming from the state and federal governments, much remains unknown about what to expect next, officials said.

Losses in state revenue from the pandemic mean that the county budget will take a hit in the new fiscal year, but it’s hard to say how much. Before the virus struck Virginia, “We had a budget 95% crafted, but that budget is probably no longer applicable. State revenue is going to plummet,” he said.

Hall said he still plans to present the total county budget to supervisors as originally scheduled on April 7. “It may not be a budget that anybody likes. I may not like it. But we will present you something,” he said.

Schools have been told by the Virginia Department of Education this week that high school seniors will be allowed to graduate this spring in spite of the school closures, but ceremonies cannot be held because of public health concerns, the board learned.

Also, further guidance is needed from the state for businesses affected by the governor’s orders to close, Hall said. “In reading the order and seeing what’s prohibited, there are still some questions on it,” he said. “If you are a business owner, I’ve been told you can go to business.va.gov to ask your questions, and you will get an answer from the state.”

Holding an in-person government meeting during the pandemic presents its own challenges at a time when health experts recommend “social distancing” and staying away from group gatherings to minimize the spread of COVID-19. The state has also not given explicit instructions to local governments on how they should proceed, nor whether they will be allowed to move to teleconferencing or entirely online meetings due to the emergency.

Because of public health concerns, Martinsville City Council canceled its meeting also scheduled for Tuesday. The county board meeting went ahead at the Henry County Administration Building as scheduled but with modifications to the agenda, a limited audience and extra safety precautions to reduce the risk of spreading the disease.

At the door to the Summerlin meeting room Tuesday, an array of germ-killing supplies offered attendees a squirt of hand sanitizer, a pair of protective gloves, and/or a spray of antibacterial Lysol before entering. Inside, yellow caution tape was used to block off pairs of seats to enforce the “6-foot rule” of distance between people.

On the stage, board members were seated farther apart than usual, and Hall gave his presentations from a desk at the front of the seating area instead of sitting with the board. Meanwhile, many department heads and support staff from the county who usually attend board meetings were not in the room. Only two members of the public sat in the audience.

Government operations are considered “essential services” and therefore not subject to the gathering ban, Hall said. “In an abundance of caution,” however, officials announced the meeting would be limited to 10 attendees. This time, it was filmed to allow a live broadcast in neighboring rooms in case more people showed up.

“We thought it was important to adhere to as much of this [order] as we could,” Hall explained to the board.

The changes are “a bit awkward,” he said. “This is all new territory for us, as it is for you. My guess is this will be the standard operating procedure for a while. If we have to make adjustments, we will. Meanwhile, we’ll make the best of it.”

Other changes to county operations include the closure of three in-person payment windows, which took effect Monday. Visitors to the county administration building are now greeted by large signs on every door that announce the closure, in both English and Spanish, and direct them instead to use drop boxes in the parking lot.

In bold, capital letters, the signs read, “NO PAYMENTS WILL BE ACCEPTED AT OUR OFFICES UNTIL FURTHER NOTICE. This is to protect our employees and the general public from potential health risks associated with the coronavirus.”

“So far, that has worked exceedingly well,” Hall told the board. “We’ve gotten a lot of phone calls. Staff members are working well.”

He also praised the Henry County Public Service Authority board for deciding to waive the usual online payment fees for people to pay their water bills during the emergency. “It appears to be driving some significant traffic online,” he said.

Board Chairman Jim Adams said, “In response to these unusual events, I don’t think most people realize how much work goes on behind the scenes. Our school systems, our sheriff’s department, our county staff members have held or participated in meetings and discussions for the interest of this community as a whole,” including on weekends, he noted, adding, “I would like to commend them for their efforts.”

More in COVID-19/coronavirus daily update from the region, state, nation and world: March 27 (4 of 22)