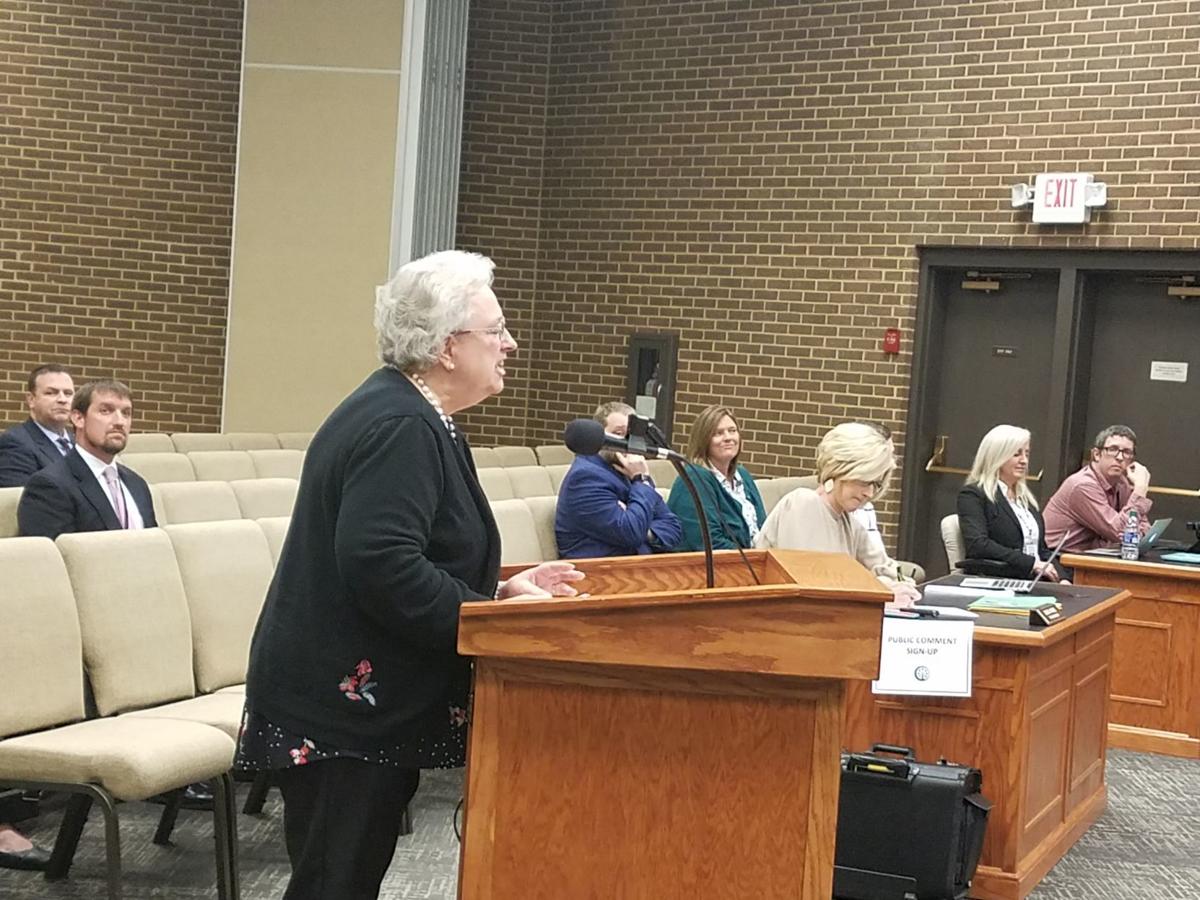 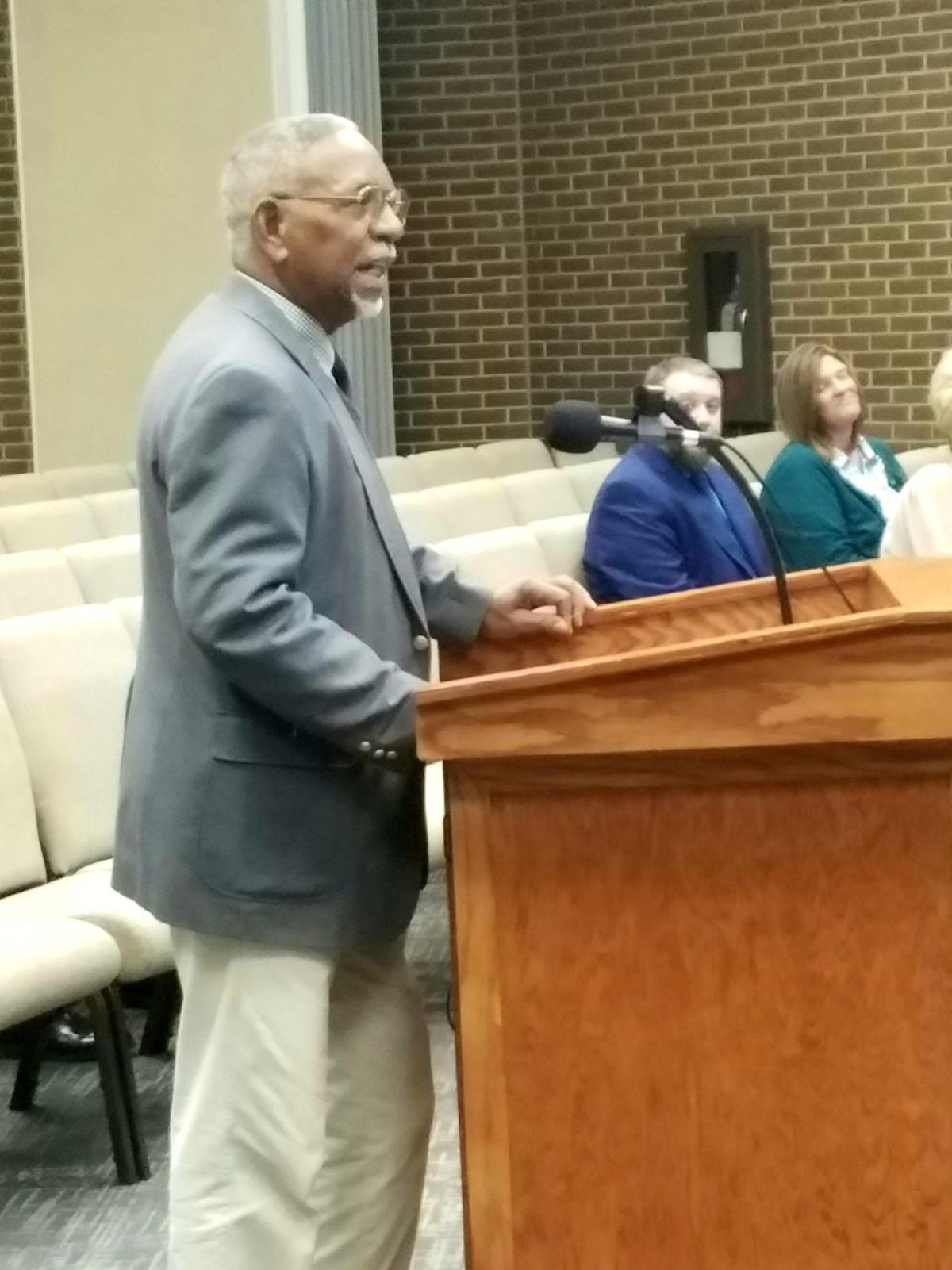 Former Henry County School Board chairman and longtime member Curtis Millner addresses current board members about the need for renovations to the G.W. Carver cafeteria and kitchen during the board meeting Thursday evening.

Former Henry County School Board chairman and longtime member Curtis Millner addresses current board members about the need for renovations to the G.W. Carver cafeteria and kitchen during the board meeting Thursday evening.

A former Henry County School Board chair urged the current board to take action on renovating the kitchen and cafeteria area of G.W. Carver Elementary School.

Speaking during the public comment period of the school board’s monthly meeting on Thursday evening, Curtis Millner said he was “upset” at the state of the facility, which he said has “the smallest kitchen area of any of the schools.”

Millner attended Carver when it was a segregated high school and was graduated in 1960. “The cafeteria has not changed since then,” he told the board. “When new kitchen equipment has come in, there’s no place to put it, so it is put in the cafeteria. Cafeteria tables are put out in the hallway.

“Those children deserve a place to eat, the same as the rest of our children. Our cafeteria workers deserve the same place to work as the workers at other schools,” he said.

School officials said later that the work is planned for the next fiscal year, which starts in July, if the budget allows.

Millner first was elected to the school board as the Iriswood district representative in 2002 and served for 16 years, including four as chair and one as vice-chair. He decided not to run for re-election after his fourth term.

Board members typically do not respond directly to speakers during the public-comment period. However, later in the meeting, several school board members expressed support for the Carver project and noted it is still on a list of planned capital improvements for next year.

A budget presentation by David Scott, assistant superintendent for operations and administrative services, and Benjamin Boone, finance director, showed the Carver kitchen renovations and roof project at Bassett High School listed among fiscal year 2021 budget priorities. Estimated costs of the renovations were not shared with the board.

Also during the public-comment period, English teacher Dorothy Carter of the Henry County Education Association asked the school board to correct the teacher salary scale.

“I have been asking since August,” she told the board. “Our educators give 110% every day, and I’m asking you to give back to them.”

“Many are upset about the governor’s budget,” she said. “We are also going to be talking to key people about collective bargaining. This is something that has been gone from the state for too long.”

Further details and projections from Gov. Ralph Northam’s 2-year budget proposal were shared with the board in Scott and Boone’s presentation.

Scott explained that state funding comes to the school district in four “pots of money.” The largest, known as basic aid, is based on the student population, known as average daily membership (ADM).

In the current fiscal year, fluctuations in student enrollment have resulted in a net loss of $676,476 in state funds, Boone told the board. The original state aid package was based on an ADM of 7,024 students, and the adjusted number is 6,975.

For fiscal year 2021, however, Northam’s budget proposal would give Henry County Schools an increase of $3.4 million, totaling $53,964,944 in projected state funds. This includes more state funding for school counselors, English as a Second Language teachers, preschool programs and an additional “at-risk” add-on for high-poverty school divisions.

The following year, fiscal 2022, the governor’s budget provides another increase to $57,435,219. A “compensation supplement” is included to give a 3% raise to state-funded positions that year.

That means for the coming fiscal year, “any raises we’re going to have will have to be locally funded because the compensation supplement doesn’t kick in until the second year of the biennium,” Scott said.

On the cost side, there is a projected increase in employer contributions to the Virginia Retirement System, and health insurance premium rates are not yet known. “That’s going to have an impact,” Scott said.

In a list of budget priorities from the schools and departments, salary and wage increases for all employees are listed “pending available funding,” the budget presentation stated. This includes step increases for all full-time licensed teachers and rate increases for hourly and daily workers, such as bus drivers, cafeteria staff, and substitute teachers.

Stakeholders can ask questions or share suggestions on the budget by emailing budgetfeedback@henry.k12.va.us.