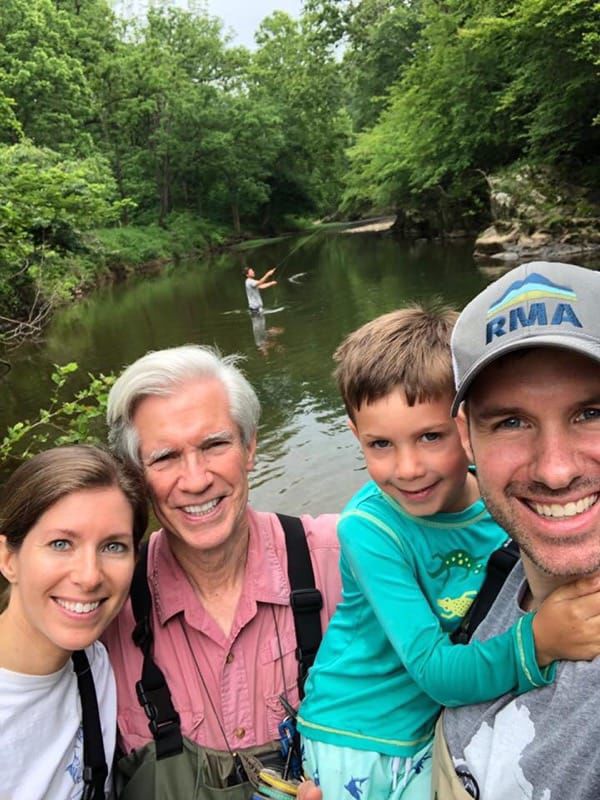 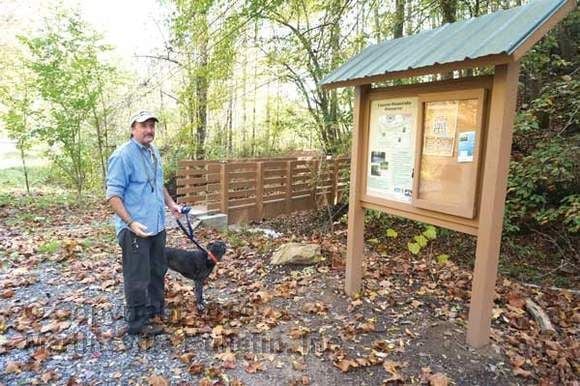 In this photograph from 201, Brian Williams, then the Dan River Basin Association’s program manager for Martinsville/Henry County, and his dog, Bella, stand at the trailhead of the Lauren Mountain Preserve in Bassett. The preserve offers trails for walking and hiking, as well as views of Bassett and the Smith River. (Bulletin photo by Mike Wray)

In this photograph from 201, Brian Williams, then the Dan River Basin Association’s program manager for Martinsville/Henry County, and his dog, Bella, stand at the trailhead of the Lauren Mountain Preserve in Bassett. The preserve offers trails for walking and hiking, as well as views of Bassett and the Smith River. (Bulletin photo by Mike Wray)

When many people think of Dr. David Jones of Jones and DeShon Orthodontics, they envision a guy with a happy smile, a generous spirit and a successful business. What some don’t know about him is that he pursues a passion outside the office – and that’s in the great outdoors.

From a young age, Jones has enjoyed spending time in nature while hunting and fishing. As the years went on, he said, he noticed a change in the activities he most enjoyed on his forest expeditions.

“The more I went, the more I kept admiring and appreciating the woods and rivers,” Jones said. “I found myself doing the actual hunting and fishing less, and more wanting to preserve what I was enjoying – the outdoors.”

During an approximately 40-year span, Jones’s woodland hobby became more than a way to pass the time and reconnect with nature. It became a calling.

He completed several conservation easements – permanent, voluntary legal agreements that limit development on land – and has another one in progress. Three of those properties are in Henry County and one is in Charlottesville.

Several years ago, Jones undertook a major project in Bassett. Some people seeking a natural retreat set out to buy an acre or two of land in the mountains, but he had a bigger vision in mind.

“It took 17 different land deals to put that mountain back together,” Jones said. “It was fun.”

After purchasing the land, the conservation began on a trail system in Bassett now known as the Lauren Mountain Preserve.

The preserve features stunning scenic views of poplars, oaks, maples and beech trees, as well as a diverse collection of wildflowers.

Jones put the land together to form the preserve, but others helped make the mountain more accessible to hikers and nature lovers.

Now accessible in a 1.5-mile loop, those wanting to get back to nature have an area of respite in Bassett.

“I want others to appreciate the great value of preserving beautiful forests, fields, mountains and rivers,” Jones said.

A love of the land doesn’t stop with him. In fact, his entire family practices conservation.

“My family members are large supporters of my conservation efforts,” Jones said. “Karen [Jones] has been very active in the Garden Club of Virginia. She twice has chaired the major annual Conservation Forum, among many other things.

“My daughter, Lauren, and son, David [Jones], share our beliefs. David has also completed several local conservation easements and we both have plans for others.”

Given the local orthodontist’s commitment to conservation, the Blue Ridge Land Conservancy – a Roanoke-based private, nonprofit land trust that protects over 22,000 Virginia acres – will present Jones with an award at a special event taking place on Sept. 22.

The Blue Ridge Land Conservancy will honor Jones with its Land Saver Award at its annual Conservation Celebration & Auction. This annual award is presented to an individual who has set an example for others to follow by permanently conserving his or her land for the benefit of future generations. In addition, this person must have been an advocate for land conservation by encouraging and helping others to protect their land as well.

For those interested in conserving land and natural resources but can’t purchase large parcels to save, Jones suggested helping on a basic, yet vitally important level.

“Whenever there are opportunities to vote at any level, local here and all the way to the top nationally, always vote for the person who will work hard for your children and future generations – the ones who will work hard for clean air and clean water. The average person can be very powerful by voting for this,” Jones said. “What could be more important? We are running out of time to leave our children a world they can survive in.”

As the Blue Ridge Land Conservancy expands its operations into southern Virginia, executive director David Perry said it was only natural to honor Jones.

“David has been doing invaluable work in the Martinsville region for years,” Perry said. “He truly exemplifies the spirit of the Land Saver Award – someone who both talks the talk and walks the walk when it comes to saving land and preserving our local bounty for our children and theirs to enjoy. And he’s been a tremendous help in getting us off the ground in Henry County and across Southside.”

The Conservation Celebration & Auction at Sundara in Boones Mill is at 4-7:30 p.m. Sept. 22. The event includes a catered gourmet dinner, live music, an open wine and beer bar and a live and silent auction. Ticket information, directions and more can be found at

The Conservation Celebration & Auction at Sundara in Boones Mill is at 4-7:30 p.m. Sept. 22. The event includes a catered gourmet dinner, live music, an open wine and beer bar and a live and silent auction. Ticket information, directions and more can be found at

The Conservation Celebration & Auction at Sundara in Boones Mill is at 4-7:30 p.m. Sept. 22. The event includes a catered gourmet dinner, live music, an open wine and beer bar and a live and silent auction. Ticket information, directions and more can be found at https://www.blueridgelandconservancy.org/celebration.html. For more information about the event, contact Tina Badger at (540) 985-0000 ext. 3 or email tbadger@brlcva.org.