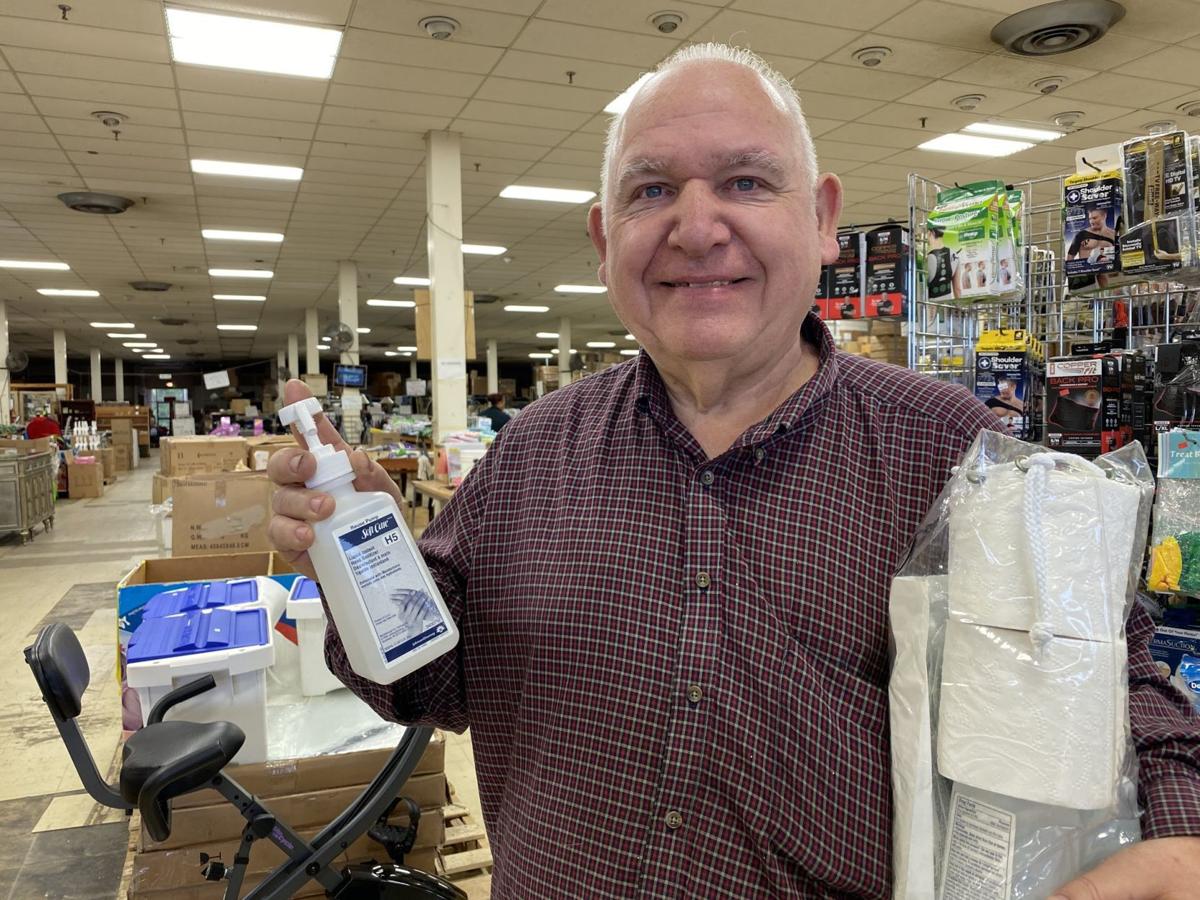 Manufacturers Liquidation Center owner Lonnie Tatum with a bottle of expired hand sanitizer and an "emergency pack" with toilet paper and wipes added. 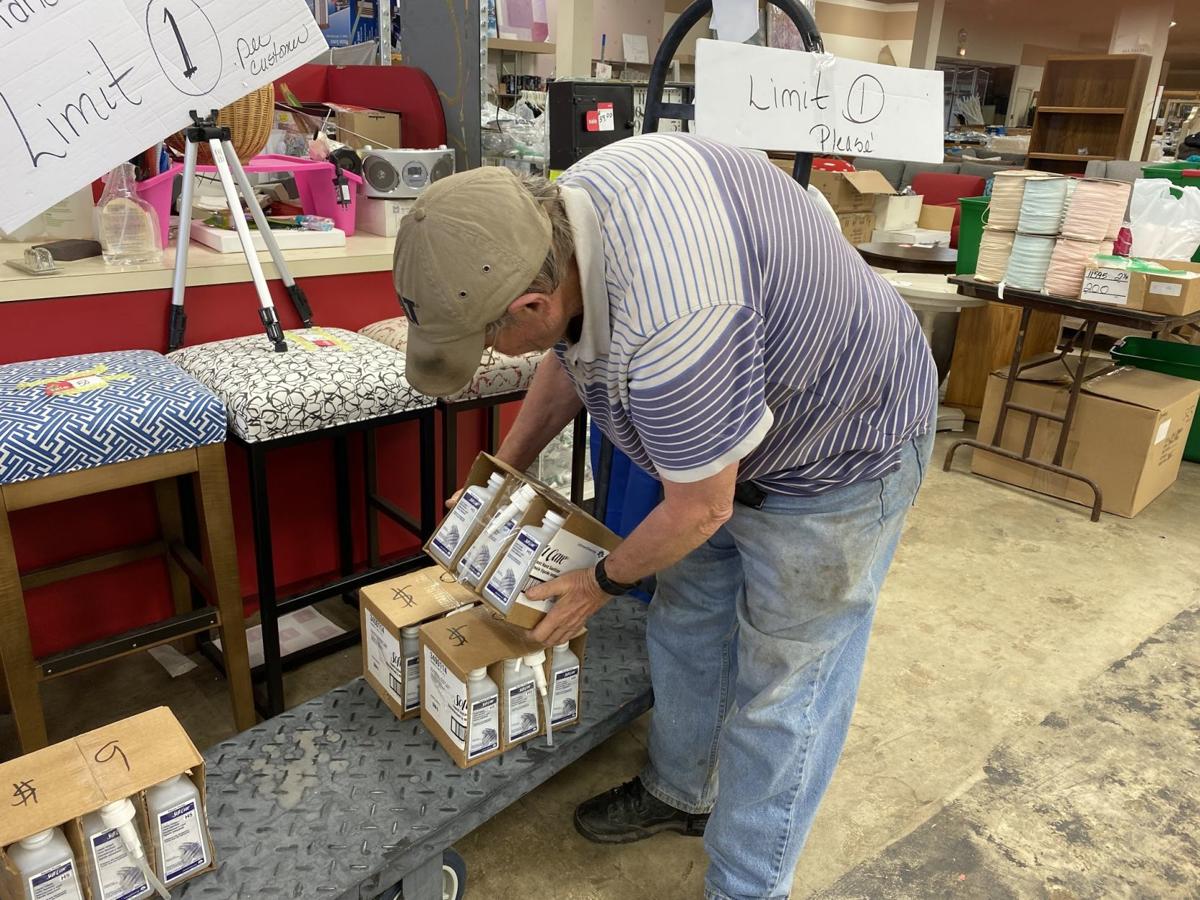 Doug Aaron is looking to purchase a six-pack of expired hand sanitizer. 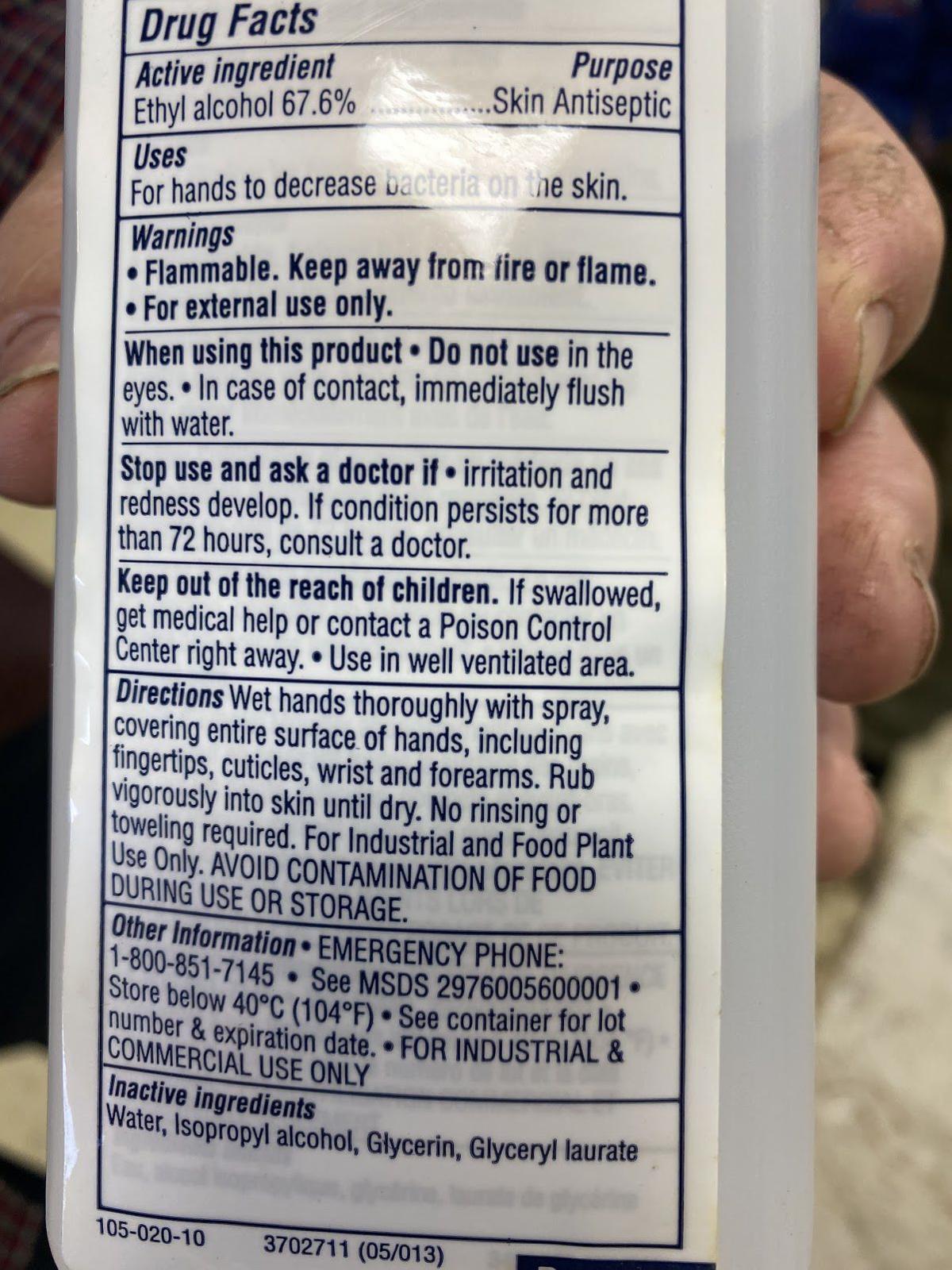 The back label of hand sanitizer being sold at MLC at the Patrick Henry Mall in Martinsville. 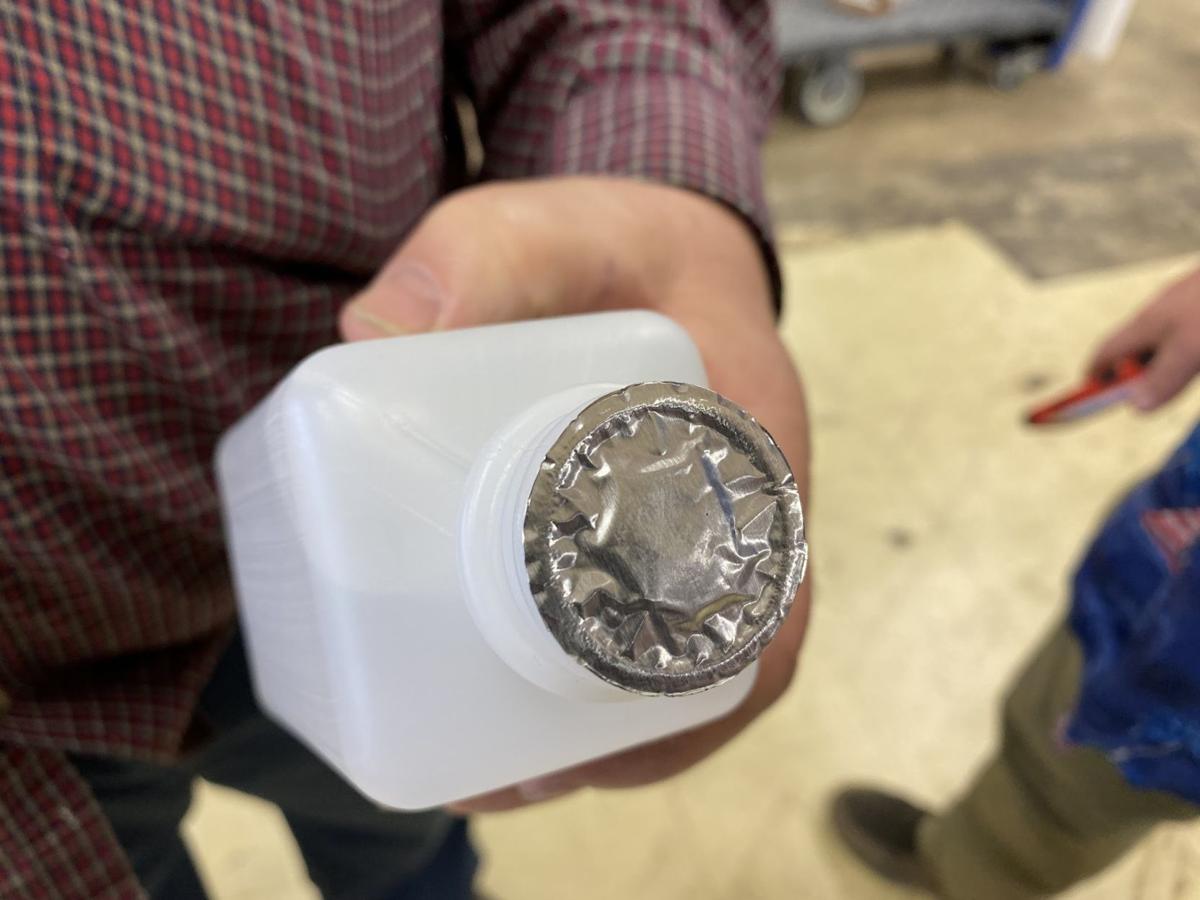 The lid is sealed on bottles of expired hand sanitizer at MLC at the Patrick Henry Mall. 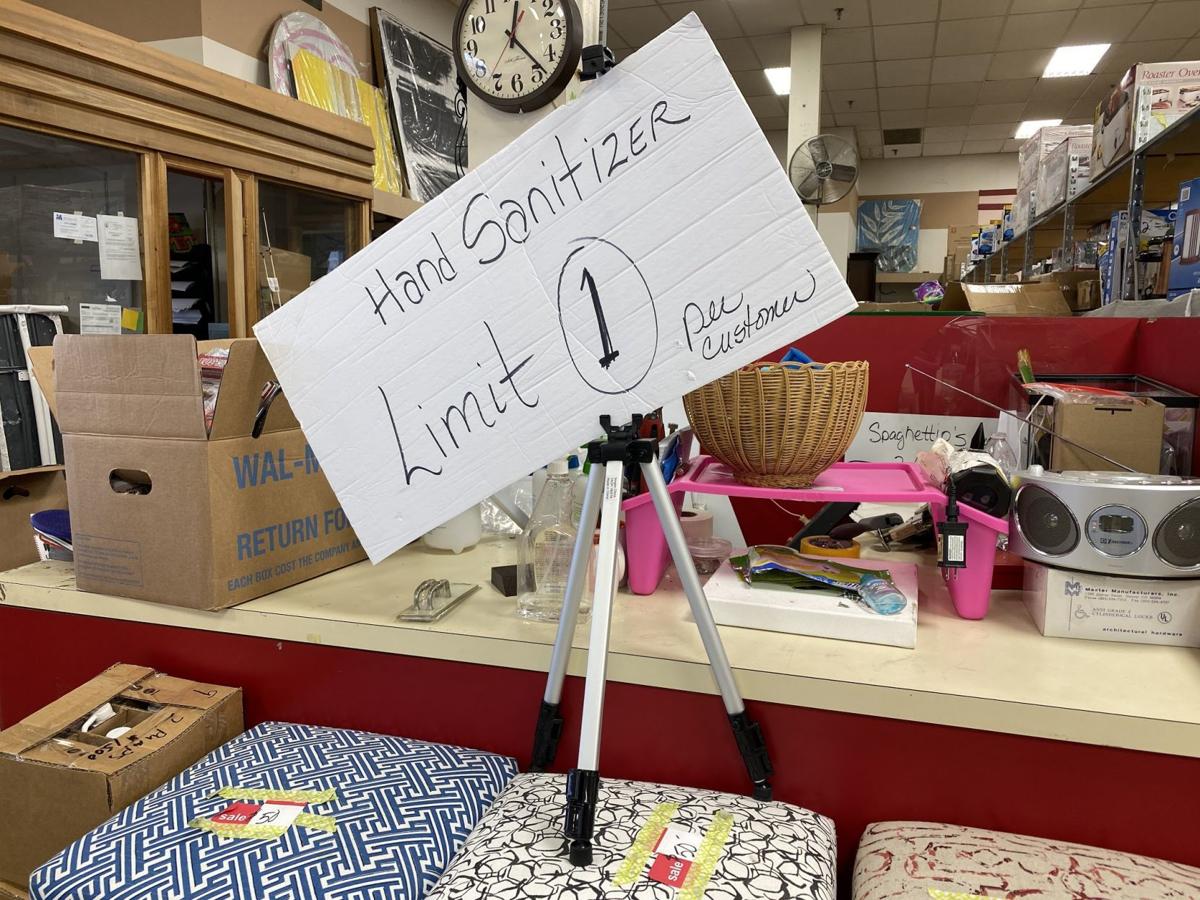 Lonnie Tatum had to go up on his price and limit the sale of expired hand sanitizer to one six-pack per person. 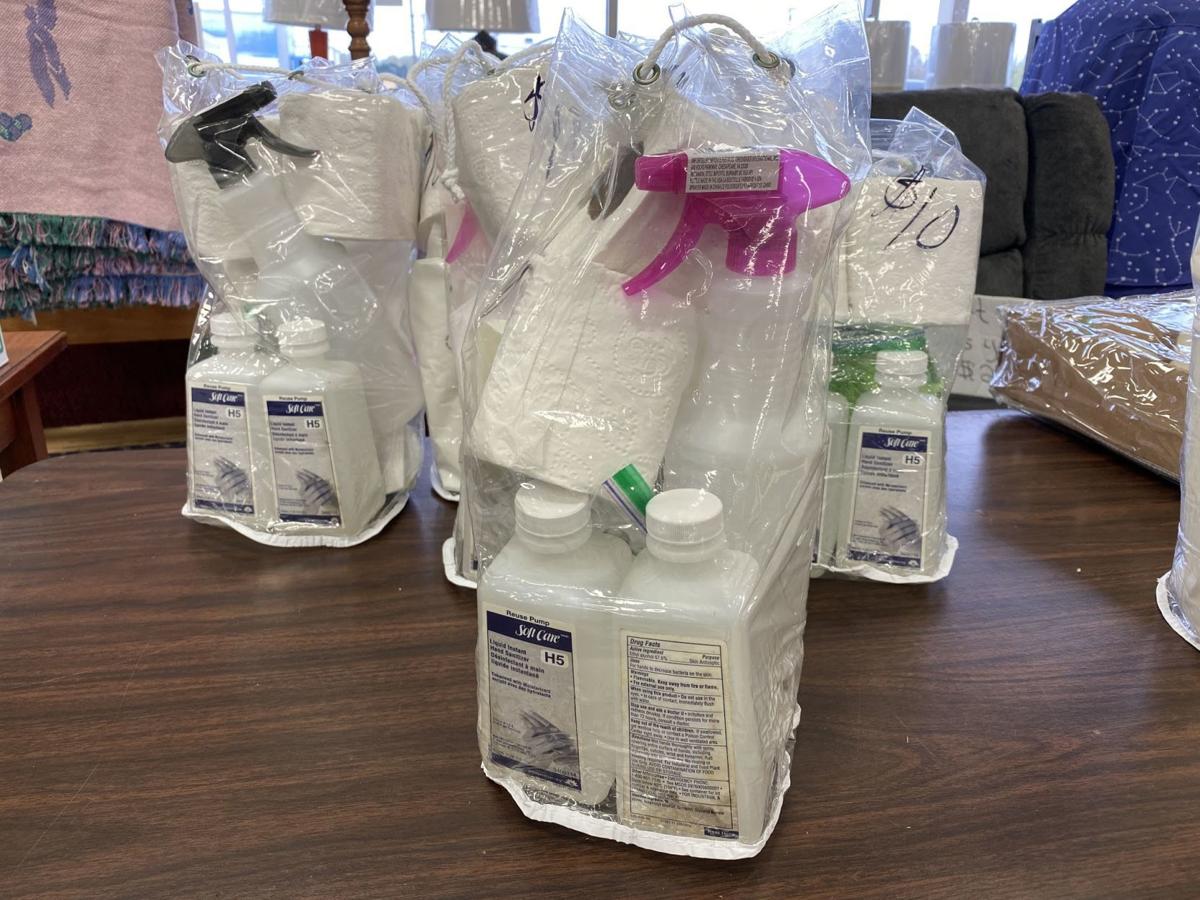 Manufacturers Liquidation Center owner Lonnie Tatum with a bottle of expired hand sanitizer and an "emergency pack" with toilet paper and wipes added.

Doug Aaron is looking to purchase a six-pack of expired hand sanitizer.

The back label of hand sanitizer being sold at MLC at the Patrick Henry Mall in Martinsville.

The lid is sealed on bottles of expired hand sanitizer at MLC at the Patrick Henry Mall.

Lonnie Tatum had to go up on his price and limit the sale of expired hand sanitizer to one six-pack per person.

There is no shortage of hand sanitizer in Martinsville.

Manufacturers Liquidation Center at the Patrick Henry Mall is selling bottles by the six-pack for $9, and they are flying off the shelves. There is only one problem — the stock appears to have an expiration date of May 2013.

“I don’t know nothing about it,” owner Lonnie Tatum said. “It looks okay to me.”

Tatum said he thought he may have gotten some of the expired product from his supplier in North Carolina — he said he couldn’t remember which one — and that it had been sold, but the bottles on the sales table at MLC on Tuesday all appeared to be approaching their seventh anniversary of “no longer being stable,” according to the Food and Drug Administration.

Tatum, 74, says he has been selling surplus supplies, furniture and household items for 52 years. All of his employees are senior citizens, and if it wasn’t for being the only store left with hand sanitizer, he said he probably would close up and go home.

“This is my last Waterloo,” Tatum said. “I started selling it [hand sanitizer] for a $1 a bottle.

When he ran out, he said he got more only to learn his supplier had raised the price to $1.25.

“I had to go up on my price and limit it to one case [six bottles] per customer,” he said.

The Bulletin contacted Walmart, CVS, Walgreens, Kroger, Food Lion and Dollar General stores in the area this week, and none of them had any supply of hand sanitizer available.

Customers purchasing the expired hand sanitizer at MLC appeared undeterred by the conversation Tatum was having with the Martinsville Bulletin about whether or not the product was effective.

Tatum took a bottle out of a case and opened the screw-top lid.

Soft Care Liquid Instant Hand Sanitizer H5 is produced by JohnsonDiversey Inc., which became Diversey Inc. in 2010. The company is headquartered in Fort Mill, S.C., employs 8,600 and is “a provider of cleaning and hygiene products serving customers in the hospitality, health care, food and beverage, food service, retail and facility management sectors” according to the company’s website.

A person who identified himself as a technical product support specialist with Diversey Inc. searched the sanitizer by its lot number and said what looks like the expiration date on the bottle was actually the manufacturing date and coded in the Julian Calendar format. He determined the product being sold at MLC actually was produced in 2005 and expired in 2007.

The ingredients contain mostly alcohol but also contains “trade secrets,” which the specialist was “unable to see” and for that reason he could not say whether it was safe to use it or not, only that the company could not “guarantee its effectiveness beyond a two-year period” because that was as far out as the company tested the product.

“Bring it back,” Tatum said. “That’s all I can say. If anyone out there doesn’t want it then bring it back and I’ll give them their money back.”

Healthline.com says alcohol is the key ingredient in alcohol-based hand sanitizers, and alcohol doesn’t spoil with age, but if the seal is broken and the alcohol is exposed to air, “the percentage of alcohol diminishes.”

Canitgobad.net agrees: Alcohol “will not go bad in a sealed, unopened bottle, but once a bottle is opened, the oxygen will interact slowly over time so that it may eventually lose its” effectiveness and become weaker “as some of the alcohol evaporates.”

And the FDA says because the public is under a health emergency, hand sanitizer may be produced and sold without an expiration date.

YouTube videos are cropping up daily showing consumers how to make their own hand sanitizer, and some companies like distilleries are manufacturing hand sanitizer under the temporary relaxation of rules.

The FDA recommends that you not try to make your own hand sanitizer because not only can it be ineffective, but made incorrectly can cause skin burns.

eMediHealth advisor Robert Williams, a family doctor in Lakewood, Colo., says approved hand sanitizer that is expired won’t harm you, it just may be less potent.

The Centers for Disease Control and Prevention says hand sanitizer should not be your primary way of reducing germs regardless of how new it is.

The CDC says, if you can find it, “choose an alcohol-based sanitizer, and one that has an alcohol content of at least 60%.”

The label on the hand sanitizer being sold at MLC shows an alcohol content of 67.6%.

A customer purchasing a six-pack of hand sanitizer declined to have her picture taken by the Martinsville Bulletin on Tuesday morning. “I’m supposed to be at work,” she said.

Tatum said he planned to have a supply of designer face masks available by the end of the week.

“I’ve got toilet paper, wipes, and hand sanitizer,” Tatum said. “Here’s an emergency pack with all three for $10.

“Nobody can beat that price even if they did have it.”

More in Martinsville-region COVID-19/coronavirus daily update from state, nation and world: April 3 (3 of 20)

Henry County School Board discusses pandemic plans for the rest of the school year, but much remains uncertain

One place in Martinsville has plenty of hand sanitizer - but does it work?