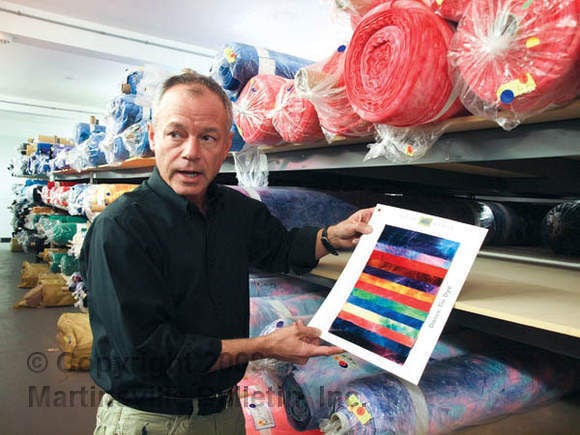 David Stone shows a sample of a few of the fabrics offered by Solid Stone Fabric. In the background are some of the hundreds of rolls of fabric stocked at the Martinsville company. 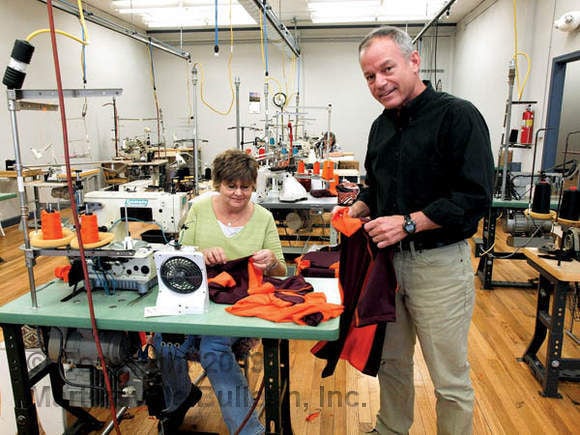 Solid Stone Fabrics President and CEO David Stone shows garments being sewn by Gail Martin at the Fayette Street business. Stone is hiring sewing operators to expand the cut-and-sew side of the 6-year-old business. (Bulletin photos by Mike Wray)

David Stone shows a sample of a few of the fabrics offered by Solid Stone Fabric. In the background are some of the hundreds of rolls of fabric stocked at the Martinsville company.

Solid Stone Fabrics President and CEO David Stone shows garments being sewn by Gail Martin at the Fayette Street business. Stone is hiring sewing operators to expand the cut-and-sew side of the 6-year-old business. (Bulletin photos by Mike Wray)

Listen closely and you can hear the sounds of sewing machines back in uptown Martinsville.

Some people have stopped at the storefront at 25 Fayette St., drawn by the once-familiar sights and sounds of a textile operation. Others have wondered if the machines are part of a museum there.

The sewing is being done at Solid Stone Fabrics, a 6-year-old company that is trying to revive the textile industry in Martinsville. Its latest step is adding a cut-and-sew operation to its contract fabric company, which essentially is a middle man to supply specialty fabrics to companies in the swimwear, activewear, costume/dance apparel and other fields.

Solid Stone has four full-time and one part-time sewing operators and is seeking to bring that number to 10 or more to handle the growing demand. The company recently ran an advertisement in the Martinsville Bulletin for sewing operators and had 60 applicants for the jobs.

David Stone, president and CEO of Solid Stone Fabrics, knew some of those people from his 12 years at Tultex Corp. In addition to sewing operators, the ad attracted other former textile industry employees who hope to be part of its revival.

Stone believes that can happen. "The sweatshirt started in Martinsville; why not keep it here?" he said.

Stone's vision is to "be a domestic textile and apparel resource" for fabric that is made here or that his company finds for a customer, and for garments that are made or processed here. And because he admits that fleece is in his blood following his years at Tultex, the company also is "dabbling" in its own line of fleece and T-shirts, he said.

No company is doing the same work in this area, Stone said.

"We are bucking the trend," he added, noting that Solid Stone has posted a 30 percent sales increase each year since its beginning in 2003. It has grown from three employees to 15.

The company has several reasons to believe it can thrive where others have not, Stone said.

For one thing, it can react quickly to a customer's needs, and it can serve specialty markets, he said.

Stone said the company ships fabric in stock the same day it is ordered. Decorated fabric is shipped within 24 hours, although larger orders may take longer, he said. Fabric that Solid Stone prints or adds foil to or both is shipped in two weeks.

Stone thinks the timing is right for a resurgence in "made in America" textiles. There is more interest in domestic products now, he said, adding that people have to weigh the higher cost of a domestic product against the loss of jobs and domestic manufacturing from an imported one.

"If I can put 20 women to work doing what they were used to doing, at competitive pay and benefits, my job is to convince stores to put it (the textiles they produce) on the shelves," even if the items cost a dollar or two more than imported textiles, Stone said.

Eighty percent of the company's sewing operations so far have been for its fabric customers, Stone said, adding that he does not want to compete with those customers. Some send Solid Stone the fabric to cut and sew; others use Solid Stone's fabrics.

On a recent day, the sewing operators were producing men's jumpsuits, dancewear and sample garments for a company that has a license for Virginia Tech apparel, Stone said. "We make the garment; they do the printing," he added.

That same afternoon, he was contacted by a swimwear company and an activewear company that were interested in having Solid Stone do work for them, and he expected to meet with other customers at a trade show in Las Vegas last week.

"We've only stuck our toe in the water" in terms of finding cut and sew customers, Stone added.

"If we can keep the ball rolling, I'd love to have a couple of hundred sewing machine operators" in other buildings in the area, he said.

Solid Stone has about 20 sewing machines in one room of the former Troxler Furniture building, 65 sewing machines in all, and another truckload of machines was on the way. It has a computerized pattern operation, among other equipment. Stone said he has been able to buy a lot of equipment in great condition at low costs that became available as the domestic industry moved offshore over the past decade.

Everything about the operation speaks of revitalization. Stone wanted to locate the company in a building with character in uptown Martinsville, and the Troxler building fit the bill. The building was renovated but retained its hardwood floors and high ceilings. The counter that once served customers now frames an employee break area.

Some of the company's employees' résumés also speak to the area's textile history. Mike Williams formerly worked at Sara Lee, Pluma and Liberty Screen Print in Madison, N.C.; Donna Napier worked with Stone at Tultex; and sewing operators Gail Martin had worked at Fieldcrest and Chase Line in Reidsville and Doris Reynolds had worked at VF Imagewear.

Stone is starting the sewing operators at $7.50 an hour. When they are trained and working full time, he said he hopes they will make $9 to $11 an hour with benefits and possibly bonuses. Piece rates may be instituted if they would benefit the workers and company, he said.

Solid Stone gets about half the fabric it sells from companies in China, Korea and Italy. The other half is in its Martinsville site, where it is sold by the roll or in cut pieces.

Its fabrics can be seen at SeaWorld and Disney China, in band flags and gymnastics uniforms. Its color cards have everything from neon oranges and greens to tie-dye velvets, camouflage, zebra stripes and Tricots for bathing suits.

The company recently added a stamping machine that can put the glitter of foil on fabric, and it has bought a $220,000 Klieverik transfer machine that puts patterns on both sides of fabrics, similar to screenprinting.

The transfer is a "green," or environmentally friendly, process, according to Stone's business partner, Luke Harris. He said it uses heat, not water, to transfer a design from paper onto both sides of the fabric. The result on one recent day was a bright orange and yellow print fabric that a customer planned to make into flags.

Stone said the business has been low-key for now, despite its move into the uptown building. But he is planning an open house this spring to show the public Solid Stone's progress.