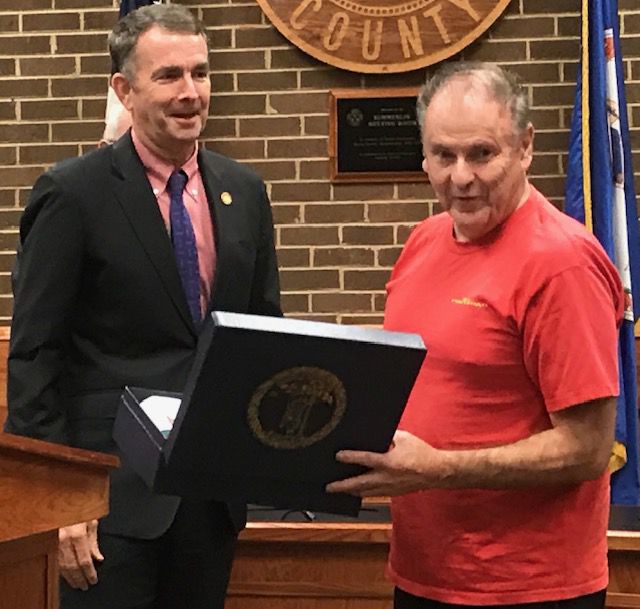 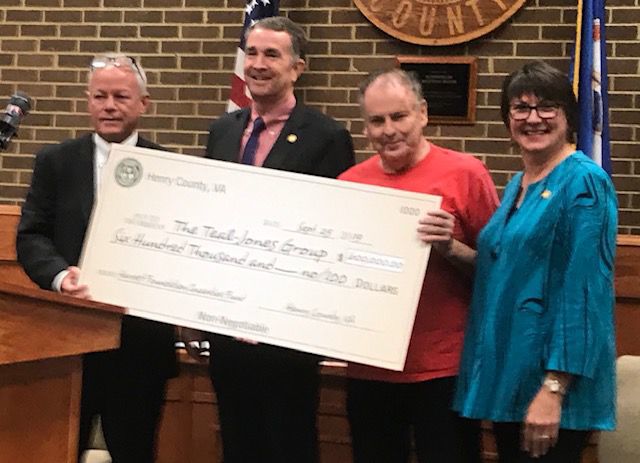 David Stone Jr., chairman of the board of directors of The Harvest Foundation, presented an oversized check for $600,000 to Dick Jones  (second from right), CEO and president of The Teal-Jones Group. Gov. Ralph Northam is shown second from left and Virginia Secretary of Agriculture and  Forestry Bettina Ring is at right.

David Stone Jr., chairman of the board of directors of The Harvest Foundation, presented an oversized check for $600,000 to Dick Jones  (second from right), CEO and president of The Teal-Jones Group. Gov. Ralph Northam is shown second from left and Virginia Secretary of Agriculture and  Forestry Bettina Ring is at right.

The jobs will pay an average annual wage of at least $35,450, which is higher than the average salary in Henry County, according to County Administrator Tim Hall.

The Henry County Board of Supervisors and the county Industrial Development Authority approved the performance agreements in a joint meeting Wednesday morning, before the economic development announcement was officially made at a public meeting starting at noon.

The Teal-Jones Group bought Pine Products sawmill facility at 315 Carver Road about a year ago, and it currently has 48 employees, according to officials with the Martinsville-Henry County Economic Development Corp.

Teal-Jones Group is based in the Vancouver area of Canada, where it has operated as the area’s largest lumber company since 1946, according to its website. The company also has a facility in Antlers, Okla.

Mark Heath, president and CEO of the Martinsville-Henry County EDC, said that he and Hall went there last November to meet with Teal-Jones officials.

“We found some really great people. We found a state-of-the-art lumber mill,” Heath said. “We saw the longest gas-fired kiln that I have ever seen in my life. It was under construction at the time. It was as long as a football field. We want one of those here, and maybe that’ll be in our future.”

“When we talk about being the No. 1 state in this country in which to do business, when we talk about our unemployment rate being 2.8 percent, the lowest it’s been in well over 10 years, we want to make sure that we lift up all of Virginia.”

He said in some areas of Virginia, companies are competing for talent, but in some rural areas like Eastern Shore, where he comes from, talent is competing for jobs.

“We really need to all collectively work together to bring businesses, like Teal-Jones, to bring new jobs to rural Virginia,” Northam said.

”That’s why it’s so exciting to be here today. This is an announcement, Teal-Jones is investing $21 million in Henry County, which will provide 67 new manufacturing jobs,” Northam said.

“We’re going to leave here in just a little bit and go to Westmoreland County where they are investing $11 million and 59 new jobs will be created. I’m here on behalf of the Commonwealth of Virginia to make that announcement, but to also sincerely to thank you, Mr. Jones, and your folks from your company for choosing Virginia,” Northam said. He was referring to Dick Jones, CEO and president of The Teal-Jones Group.

Virginia Secretary of Agriculture and Forestry Bettina Ring said the forest products industry contributes about $21 billion each year and about 108,000 jobs across Virginia.

She praised companies like Teal-Jones for such things as purchasing, manufacturing and selling wood products around the world. She said Jones recently returned from Vietnam after visiting with some folks he is purchasing wood from.

“We appreciate him getting back I think just yesterday [Tuesday] to Vancouver and being here with us today [Wednesday]. That is a huge deal. He has many, many miles that he has been traveling,” Ring said.

“The investment they [Teal-Jones] are making is the largest new investment in sawmill and kiln capacity in Virginia in decades.”

Said Del. Les Adams (R-Chatham): “Agriculture and forestry are opportunities that we have that we can build on, and when you couple that with the strong work ethic of our people here that is second to none, this expansion is surely poised for success.”

He talked about the strong economic development effort that has been underway and continues.

“In the last 13 months, seven projects have been announced, 647 new jobs, a little over $119 million in capital investment , which goes to the tax base,” Heath said. “We’ve had $21.7 million of new annual payroll.

“When Teal-Jones fully builds out, they’ll add $296,000 to our tax base. That would require the construction of 533 new homes of $100,000 in value. That kind of puts in perspective what a day like today means for us.”

Dick Jones of Teal-Jones said the expansion in Henry County “is a huge opportunity here. Lots of resources. Lots of good people.”

He thanked all the partners for working with Teal-Jones to provide incentives to make this possible.

According to a news release from the Office of the Governor, Secretary of Commerce and Trade Brian Ball said, “Teal-Jones Group’s decision to create a total of 126 new jobs and nearly triple its lumber production in two rural regions of the Commonwealth is a tremendous win for Henry and Westmoreland Counties, Virginia’s forestry sector, and the industry employees and forestland owners.”

The release added:”The Teal-Jones facilities in Virginia manufacture dimensional Southern yellow pine lumber in a variety of grades and sizes. Most product is kiln-dried and sold to a variety of manufacturers, retailers and wholesalers, both domestic and international, for use in a wide range of construction and project applications. The company’s investments in state-of-the-art sawmills, dry kilns, and other manufacturing equipment will help ensure a strong market for forestland owners in the region.”

DANVILLE — With more than 40 years in the forestry industry, Kenneth Scruggs has watched forests grow, removed the planted trees at the right …