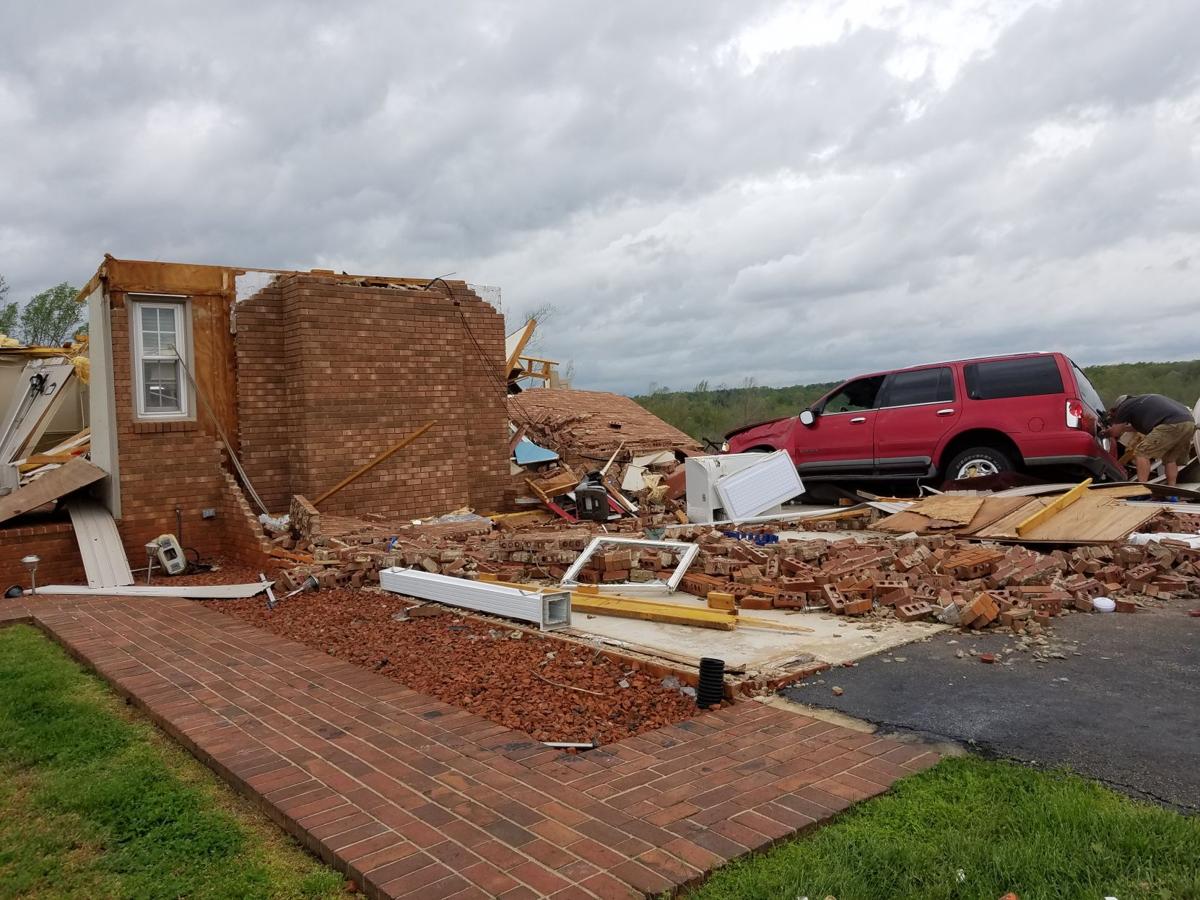 This home of Larry and Delores Anderson  at 127 Windy Ridge Road in the Sydnorsville community in Franklin County was destroyed. 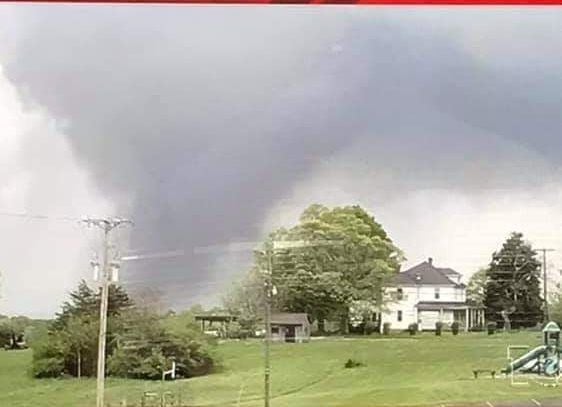 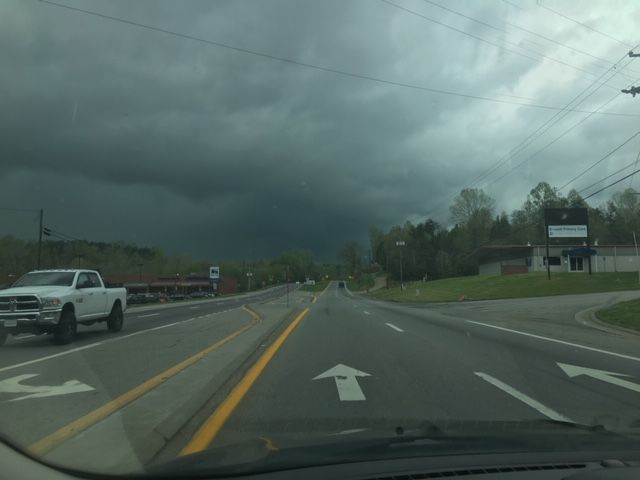 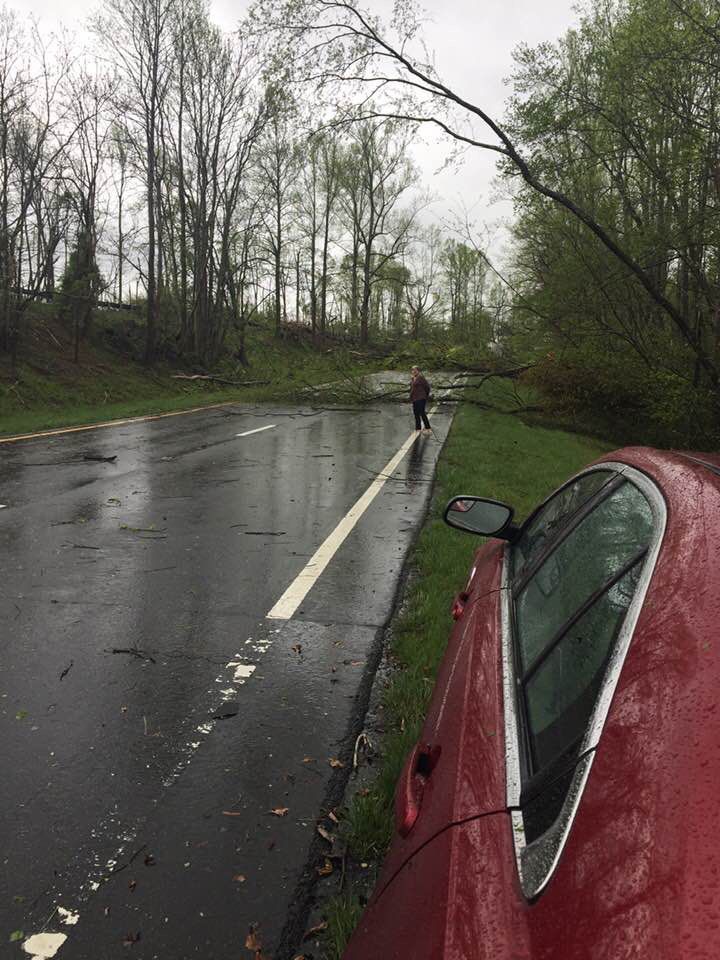 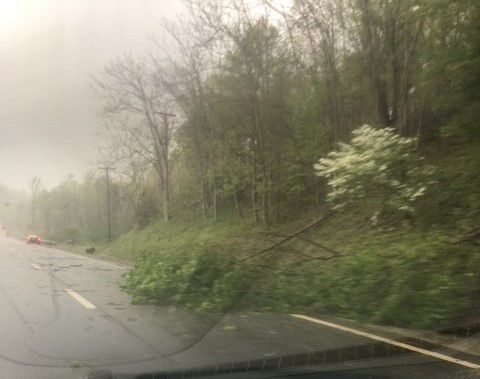 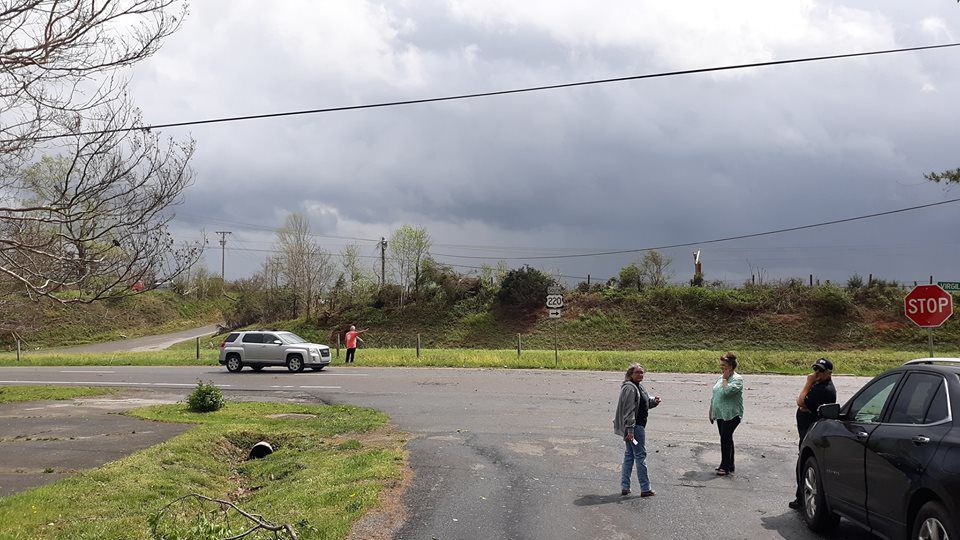 This home of Larry and Delores Anderson  at 127 Windy Ridge Road in the Sydnorsville community in Franklin County was destroyed.

SYDNORSVILLE — A tornado cut a path about 25 yards wide and about five miles long between Goose Dam Road and Ashpone Tavern Road in Franklin County on Friday morning, destroying two homes and damaging five others.

No serious injuries were reported.

William B. Ferguson, director of Franklin County Public Safety, gave that report about 3 p.m. Friday, based on damage that had been discovered or reported at the time. He said the unconfirmed tornado hit at roughly 11 a.m.

The home of Larry and Delores Anderson at 127 Windy Ridge Road, in the Sydnorsville community, was destroyed.

Delores Anderson said she was outside on the front porch when the winds got up and looked like they were twisting. She went in her basement and covered herself with blankets for protection.

What did she hear?

“It sounded like a train,” she said. That lasted about two minutes.

Her husband said at one point she phoned him. She was hysterical and said the storm had blown the windows out of the house. But at that point, she did not realize the house had been demolished.

Anderson said he didn’t realize how much damage had been done either until he arrived at the scene.

How bad was it?

He didn’t think the damage to the house would have been worse “if you would have dropped a bomb on it.”

The storm took the roof off the house, leveled most of the walls, demolished the attached two-bay garage and moved the vehicle that was inside.

“It was completely devastated,” he said. “I couldn’t believe it.”

Anderson said a man who lives nearby told him he saw the apparent tornado take the roof off the house.

Family members, friends, emergency personnel and Salvation Army Martinsville Corps personnel were on the scene Friday afternoon to offer support, help and comfort to the Andersons.

She tried to look on the bright side.

“I’ve got my family, friends and God. That’s all you need.”

How do they plan to proceed?

“Start over,” her husband said. They do have insurance.

He said for the tragedy “hasn’t sunk in yet.”

According to Lt. George Keith of the Salvation Army a second home that was destroyed – on Fishburn Mountain Road – was vacant. Keith and his wife, Lt. Ruby Outlaw-Keith, responded to Franklin County to help storm victims.

“The lower end of the park, it looks like tornado damage for sure. It tore up a number of trees,” Paul D. Chapman, Franklin County’s director of parks and recreation, said:. “Our disc golf course will be unplayable for quite a while. Countless trees are down in that section. Probably damage to structures. It damaged the end of our baseball fields. The light poles, the lights at night, were toppled over. One was snapped. One was pushed down. Another one is leaning pretty good.

“That field also got a lot of damage. The back stop is bent. A number of the fences are torn all up. The bleachers were blown away. In fact, one was blown across the street and is in the top of the neighbor’s tree. We’ve probably got 8 or 10 sets of bleachers that have been ruined -- bent and torn up or blown away. It’s funny – the one baseball field had major damage, but the field next to it is AOK, nothing wrong with it.”

He didn’t have a dollar estimate of the damage.

“I think we’re going to close certain areas. There’s hundreds of trees tangled, twisted, broken off. For a while you could still hear them falling. We’re going to keep people back from those areas.”

How will this affect the park’s operations?

Chapman said: “This is hitting us at the worst time. Right now is when we are busiest. Grass is growing the most. Most people are visiting parks right now, beautiful springtime. Athletics – we’re slammed as it is, preparing ball fields for soccer, lacrosse, baseball, T-ball and softball. We’re busy just maintaining. This is a major setback for us. No injuries, that’s the most important thing.”

Chapman said he and other parks and rec staff members got a tornado warning about 15 to 20 minutes before the storm hit. “Everyone’s phones buzzed with the tornado warning.”

“Some of the other guys when they came up were like, ‘You could really see it swirling,’ that kind of thing,” Chapman said. He added, “They were like, they could hear the winds coming. Oh, it was really howling over this way.”

Chapman said, “When I went down and I saw it, you could definitely feel there was something weird in the air. It looked like a major thunderstorm to me. It didn’t look too much different.”

Chapman and six other parks and rec employees sheltered in the basement. “We had the door open … so we could see it.”

Greg Clemons, maintenance supervisor for Franklin County Parks and Rec, said the apparent tornado had already crossed Route 619 [Sontag Road] by the time he got to Franklin County Recreational Park, which is on that road. “I didn’t hear anything, but I was coming down [Route] 619 and could see debris a couple hundred feet up in the air. It was so far up I don’t know what it was. It was raining really hard. It had already crossed the road. I was seeing the remaining debris up in the air.

Across the road from the park, Joey Snead was at home at 2265 Sontag Road when the apparent tornado hit.

“I was a-sitting on the couch. I thought it was thunder I heard coming,” Snead said. “ It was just constant, so I got up and looked out the window. Coming along the wood lines over at the park, wind was like that [he moved his hands horizontally], trees were down and debris was blowing. You could actually see the definition of the [wind].

“I picked the dog [a deaf and blind Shih Tzu] up and was getting ready to go downstairs and looked out the window and the bleachers at the ballpark [across the road] were up in the air and it landed in the tree over on the side of the house over here and the other one landed there in the front yard. By the time I got the dog and got to the door, it had done passed through. It went by the side of the house into the woods.”

“Our cat [a feral calico cat] was outside. She hasn’t showed back up yet. We’re looking for [her]. She came here and took up…. When the thunder started I tried to get her to come in the house. She ran off. She’s probably under the house. She gets scared.”

Snead said the apparent tornado tore vinyl ceiling off part of the front porch, removed some shingles from the roof of the home, blew part of the roof off of an outbuilding, overturned and snapped or twisted trees, and did other damage to their property,

Next-door neighbor Joyce Norris, of 2293 Sontag Road, said there was damage in her yard.

“There’s a tree down, and there’s debris evidently from one of the houses here,” Norris said. “My furniture from the porch is in the yard or somewhere. I don’t know where it is at this moment. Everything other than this is OK. The house is OK. I’m OK, just shook up a little bit. …”

She was not aware that tree had been blown over in her back yard.

“I haven’t looked back there,” she said.

Did she do anything to protect herself?

Jessica and Dallas Woody and their six children ranging in ages from 6 months to 11 years live near U.S. 220 in the Sydnorsville area, and Dallas Woody’s business, Woody’s Tree Service, is based there.

He said: “We got alerts on our phone.”

Jessica Woody said:” I didn’t really take it seriously. My dad called. My kids were out here playing. It was windy, playing like birds…. I looked out the door. That brick house over there [across the road], I could see swirling clouds like it was trying to touch down to the ground. It was weird. I had never seen anything like that. It startled me. I said, ‘Kids, get in the basement now.’ I don’t think it ever was able to touch down because I don’t think it was flat enough, but obviously it did further up the road.”

Dallas Woody said he figures the tornado was trying to touch down, “but it didn’t get going until a little further up.”

Franklin County Public Safety Director Ferguson said mid-afternoon Friday that a multi-jurisdictional heavy rescue team was searching the areas that might have been impacted by the apparent tornado to see if there was any other damage that had not been reported.

In addition, Franklin County Sheriff’s Office, Virginia State Police and Virginia Emergency Management responded in the aftermath of the storm.

Ferguson said there were reports of two people sustaining minor injuries in separate incidents. One was a motorist driving on U.S. 220 when a tree fell on the vehicle. The motorist was able to get out of the vehicle. The other person was hit by flying debris.

A section of U.S. 220 was blocked for a time, and traffic was re-routed.

Phil Hysell, a meteorologist with the National Weather Service office in Blacksburg, said the storm reported in Franklin County likely was a tornado, based on information NWS had seen on social media. NWS will have someone checking it out on Saturday.

He said the forecast for Friday night calls for off-and-on thunderstorms that may last until 9 or 10 p.m., with possible heavy rains, lightning and, with the strongest storms, winds of up to 60 mph. The forecast is for an area including Martinsville and Henry, Patrick, Franklin and Pittsylvania counties.

Paul Collins of the Bulletin staff contributed to this report.

Storms down homes as they cross Martinsville region (UPDATED)

The effects of various storms, including an F3 tornado that plowed across Franklin County on Friday.