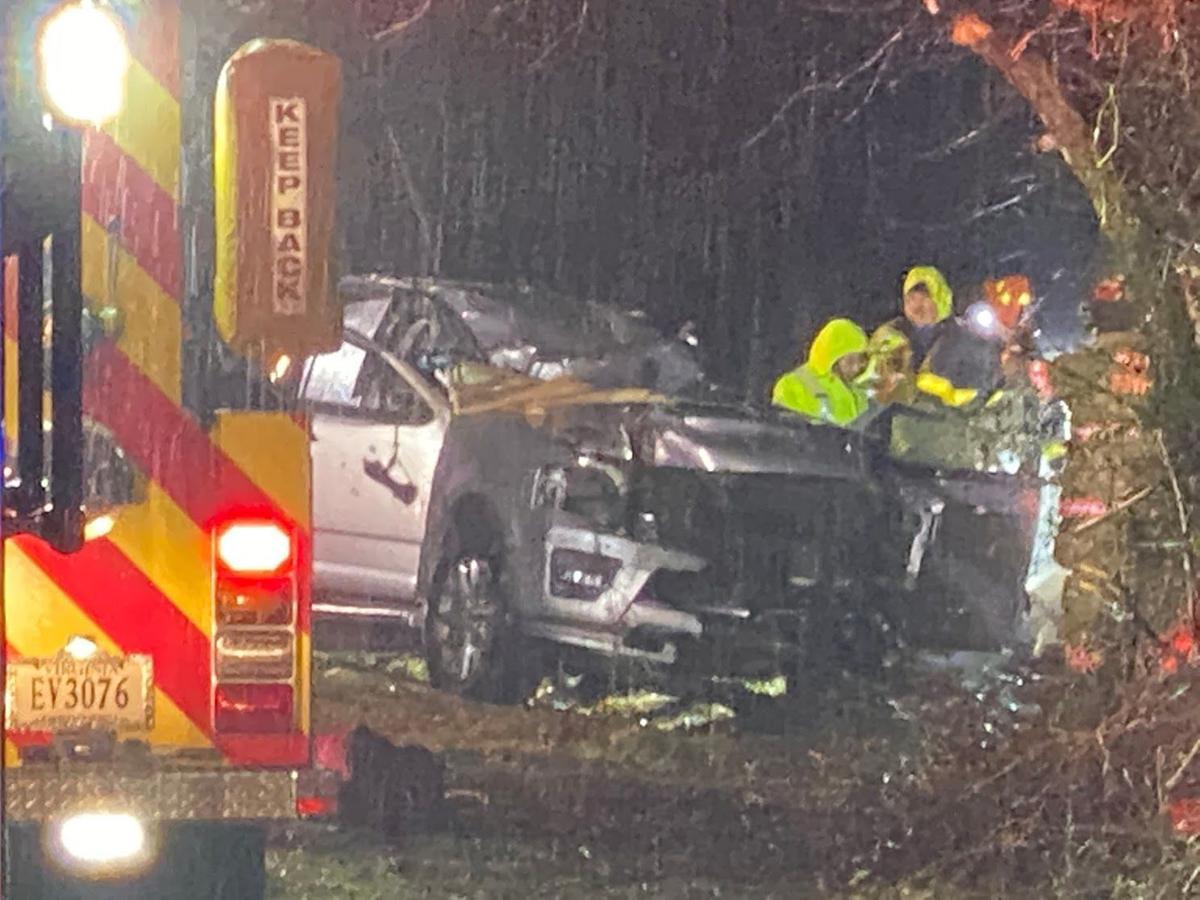 Charlie and Sherri Bradshaw died in this crash. 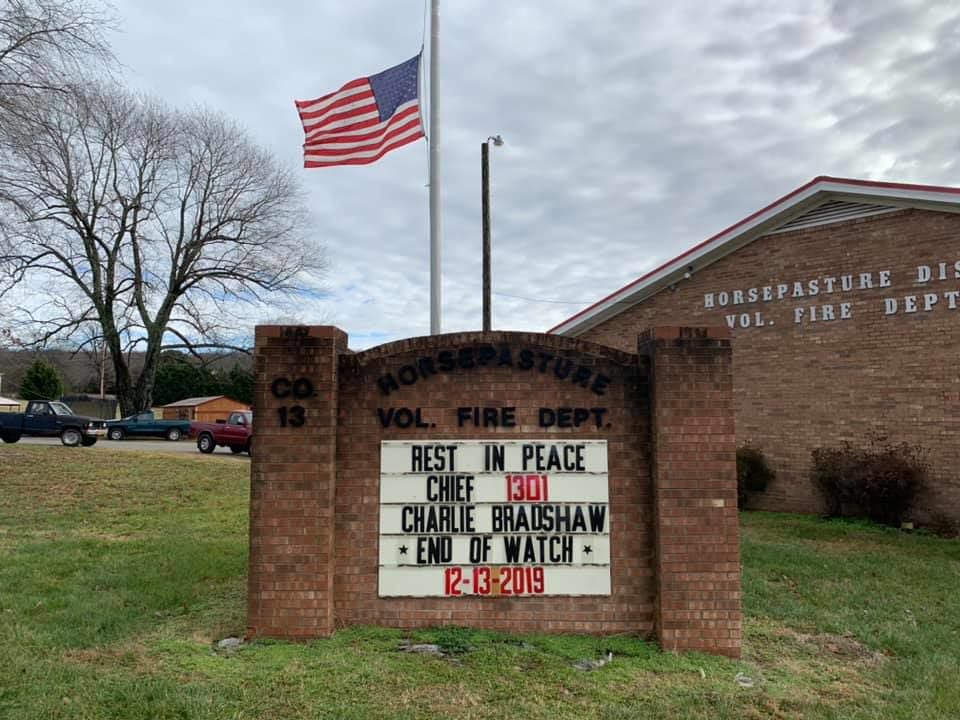 The flag is lowered and a sign to memorialize the death of Fire Chief Charlie Bradshaw and his wife is posted on the marquis outside the Horsepasture Volunteer Fire Department. 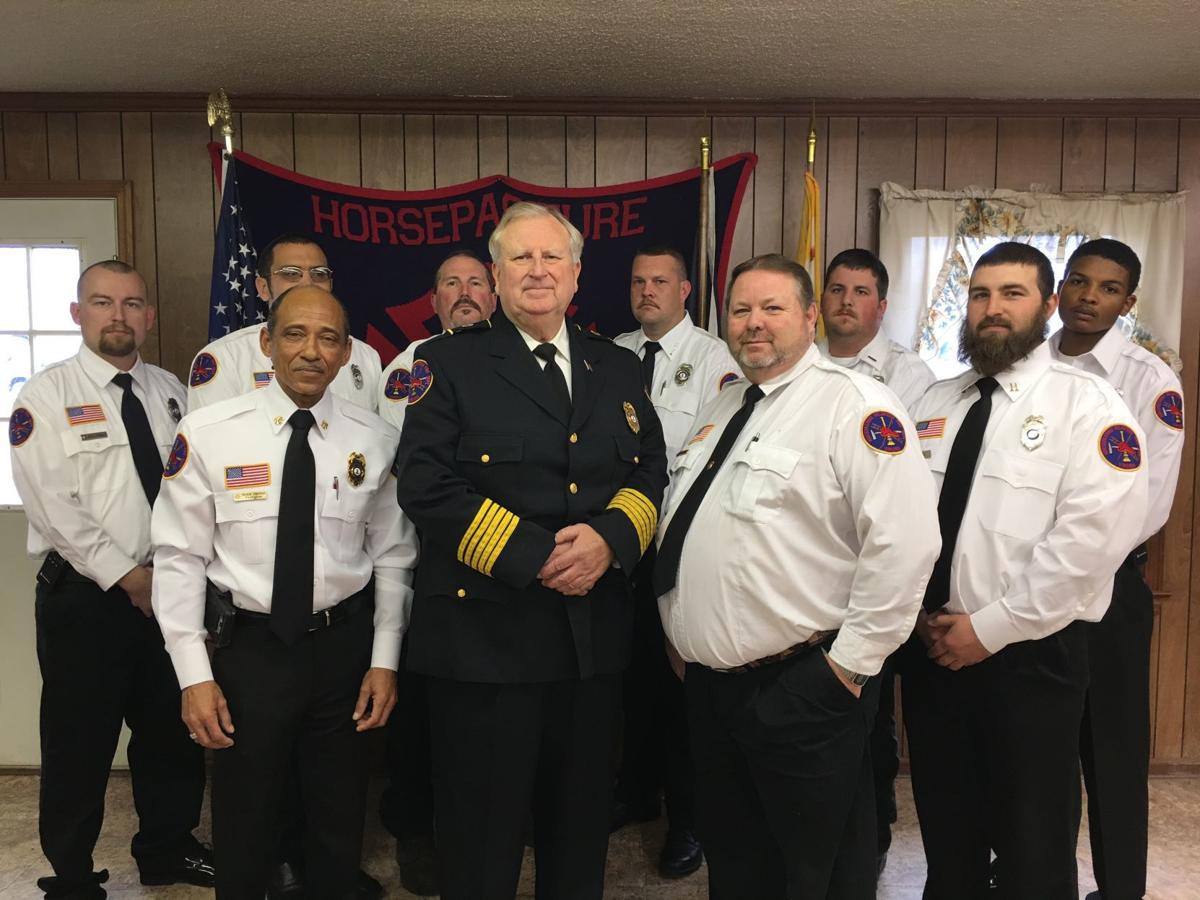 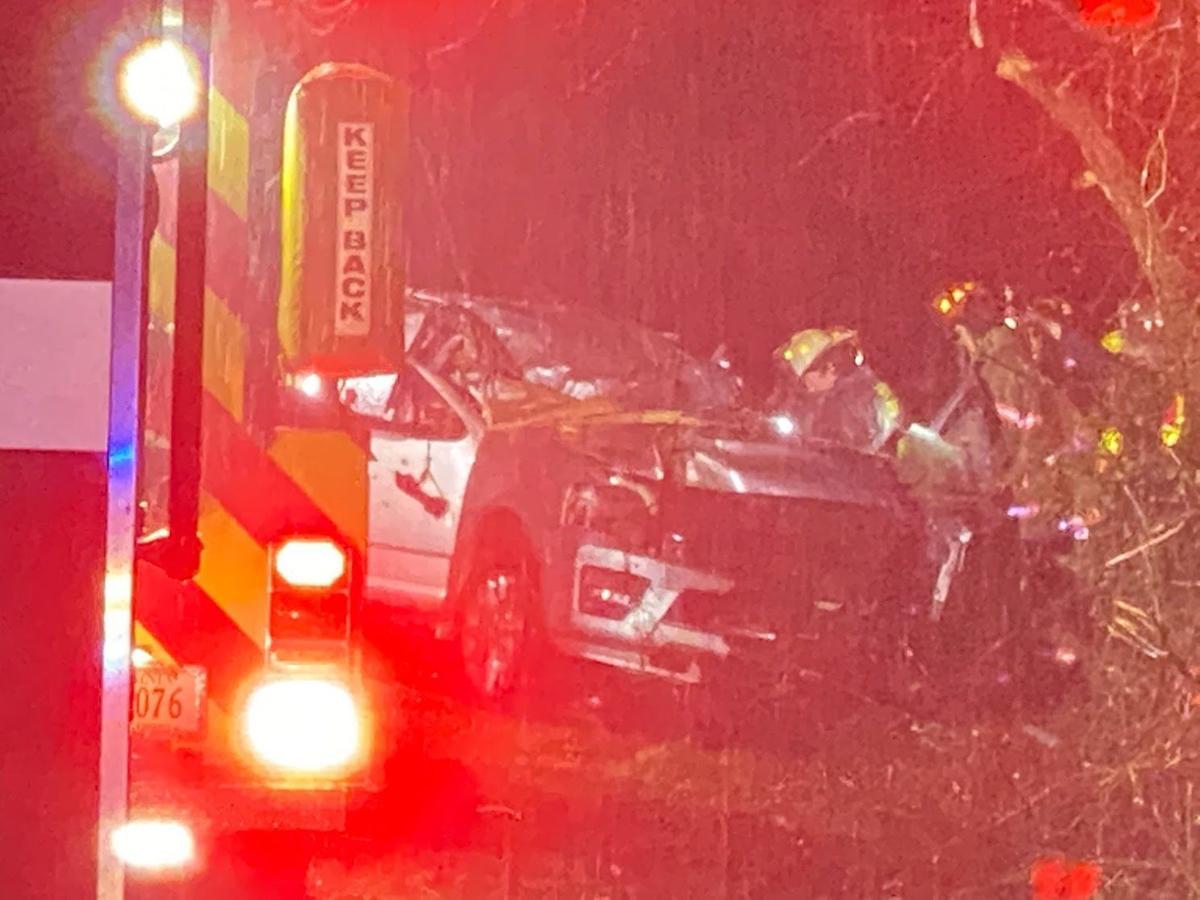 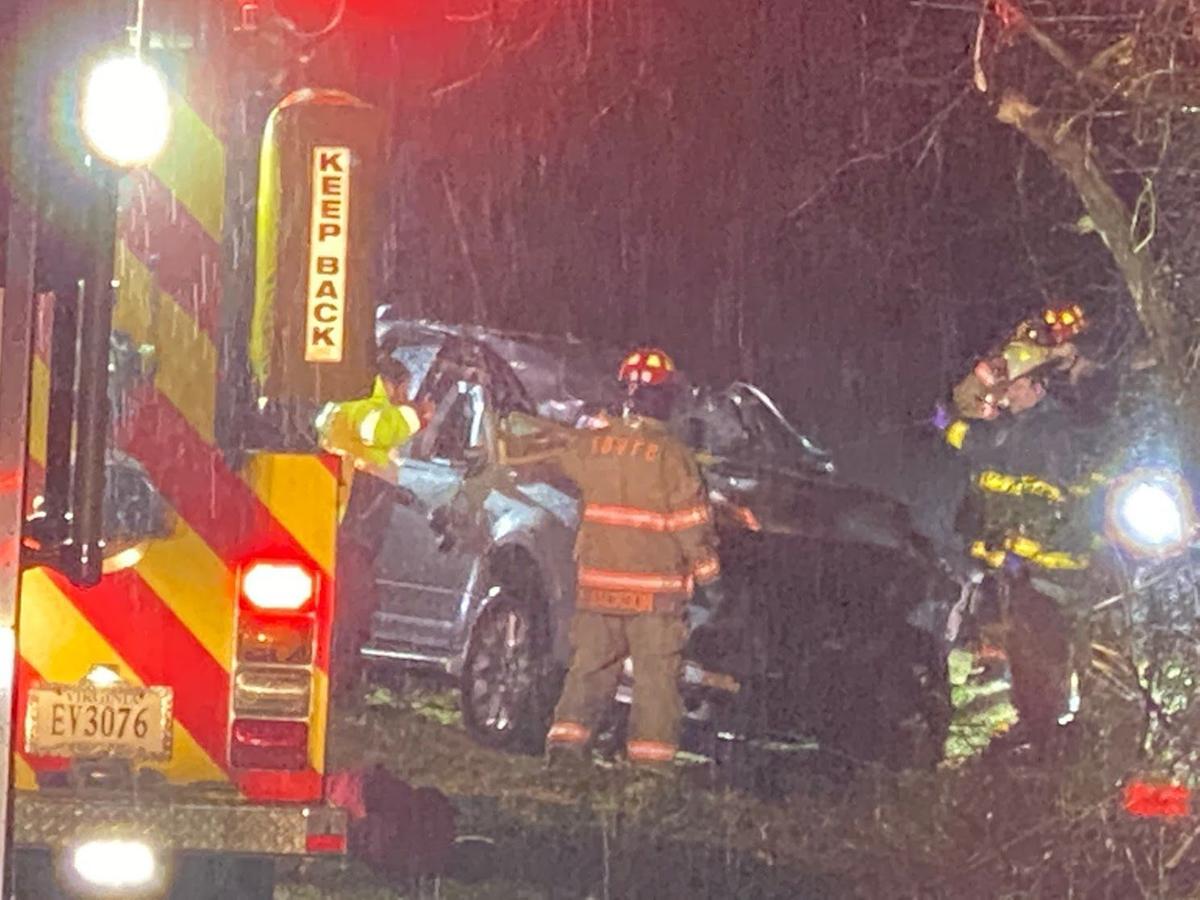 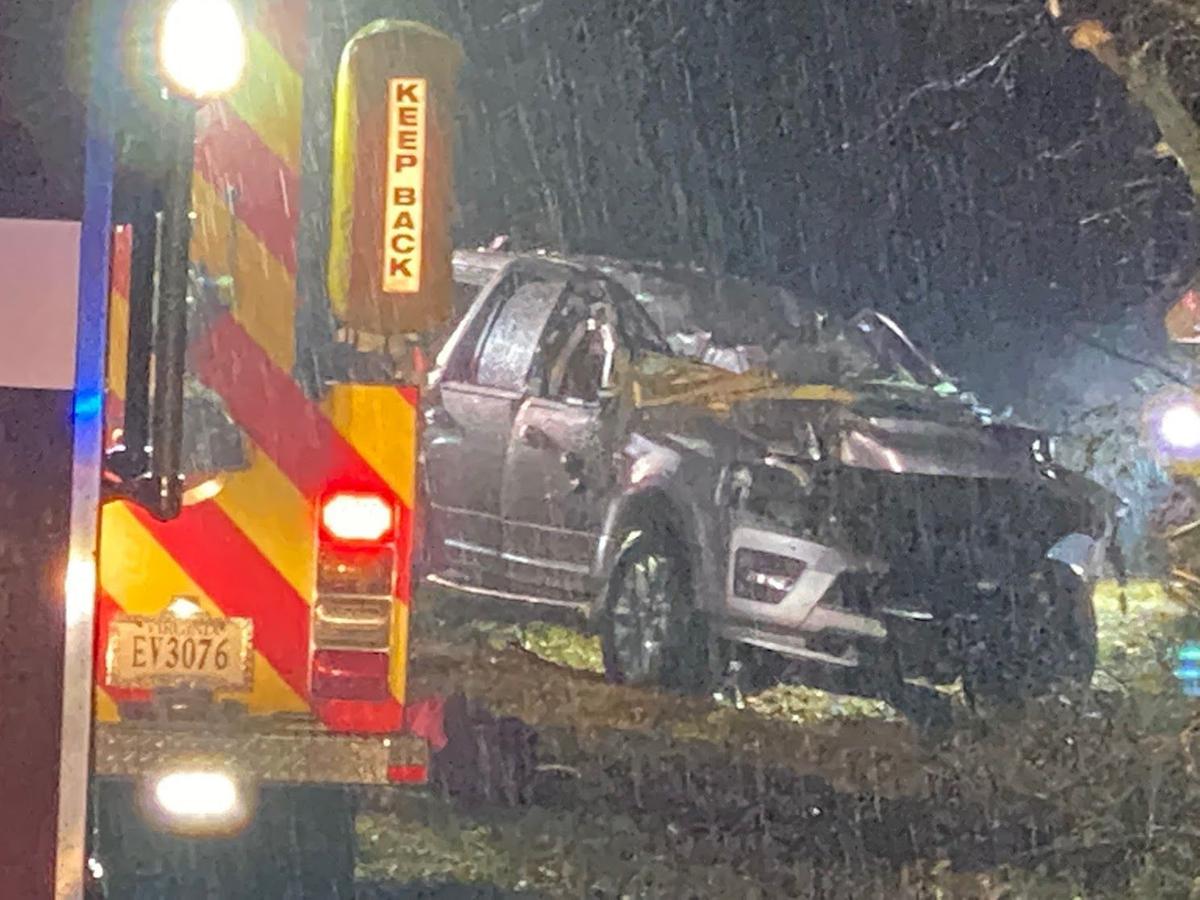 Bradshaws' vehicle careened into the woods. 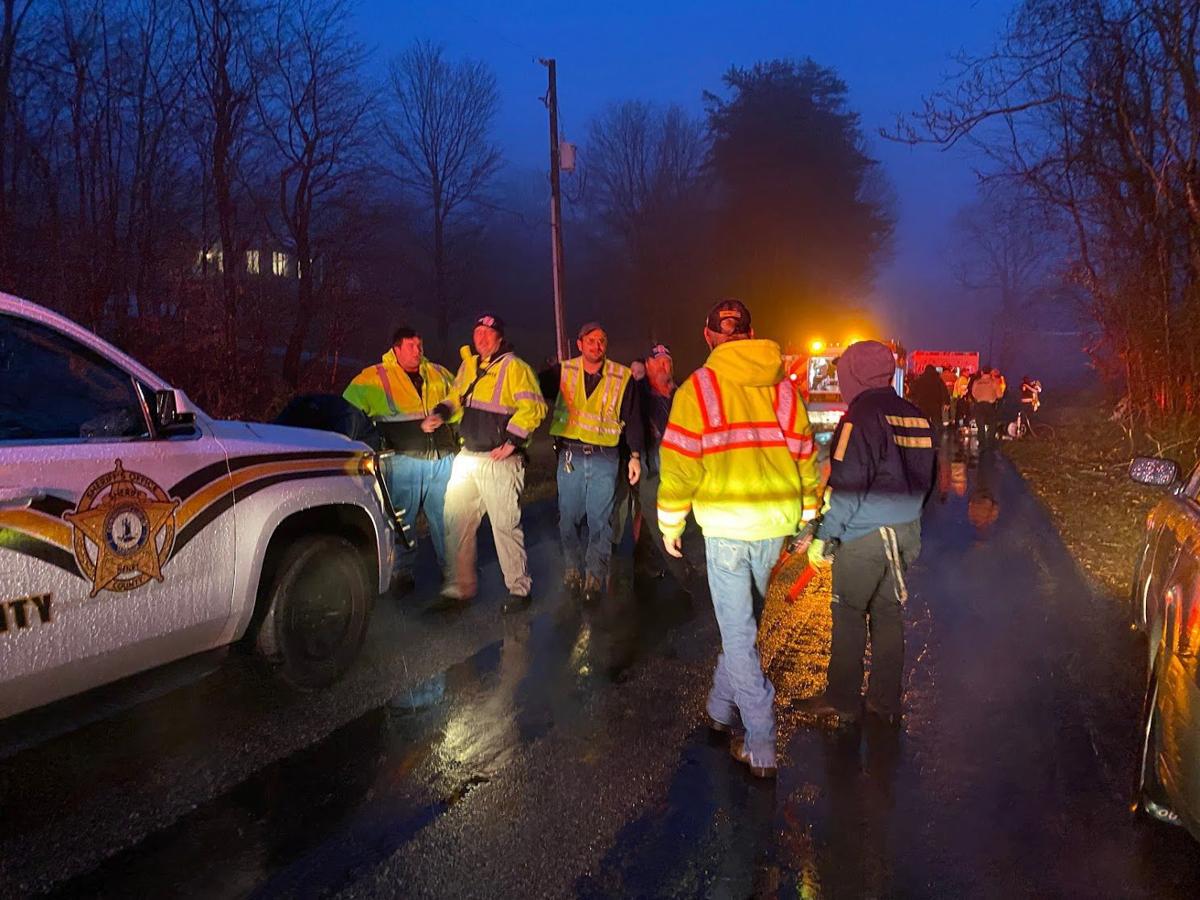 First responders at the scene of the crash. 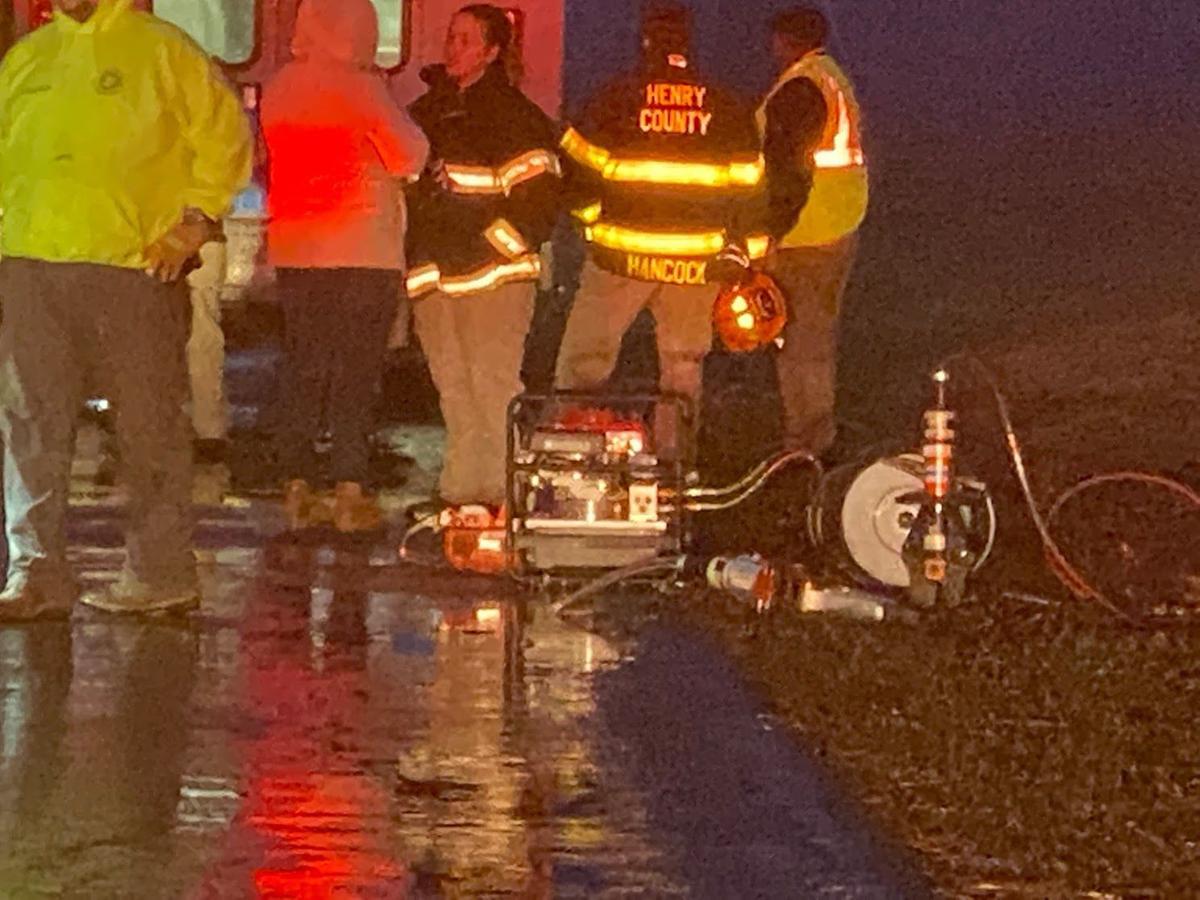 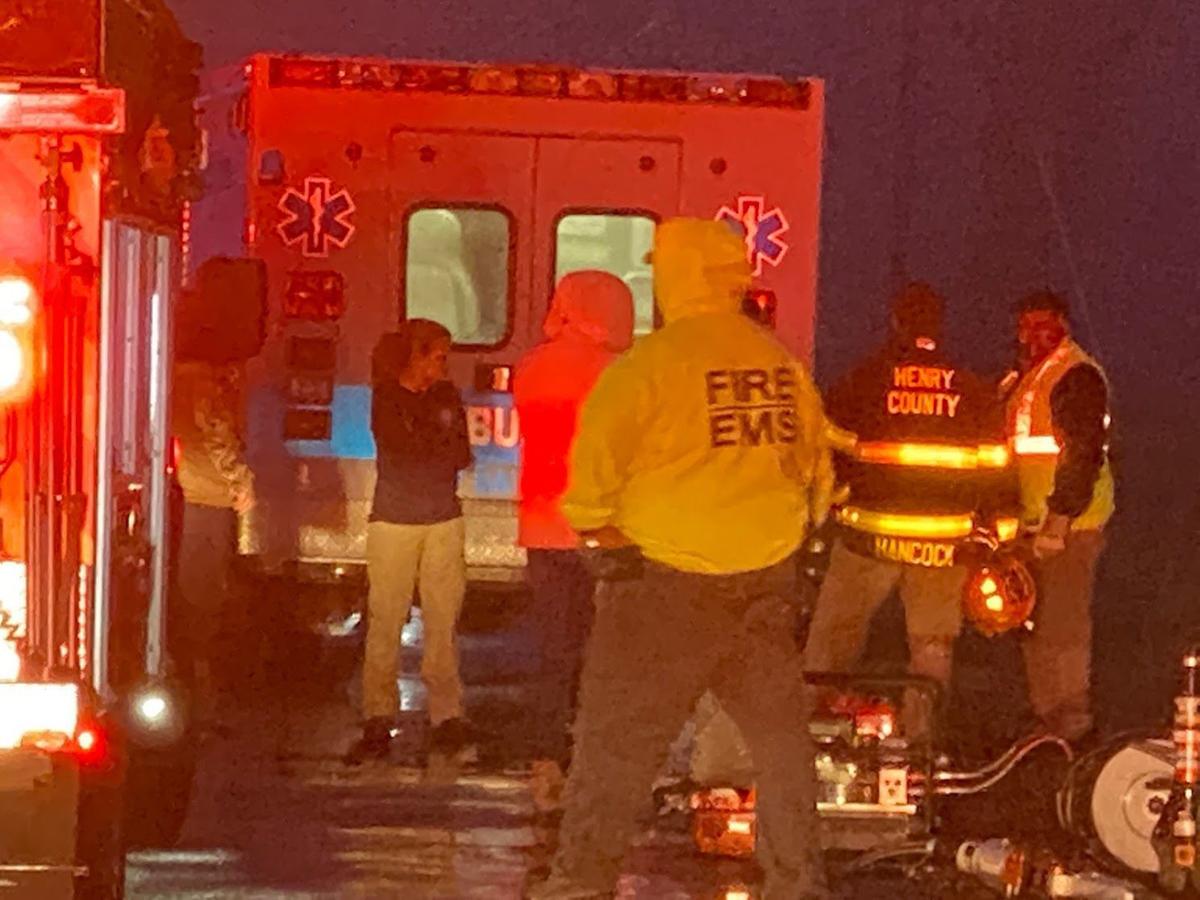 Stunned rescue workers at the scene. 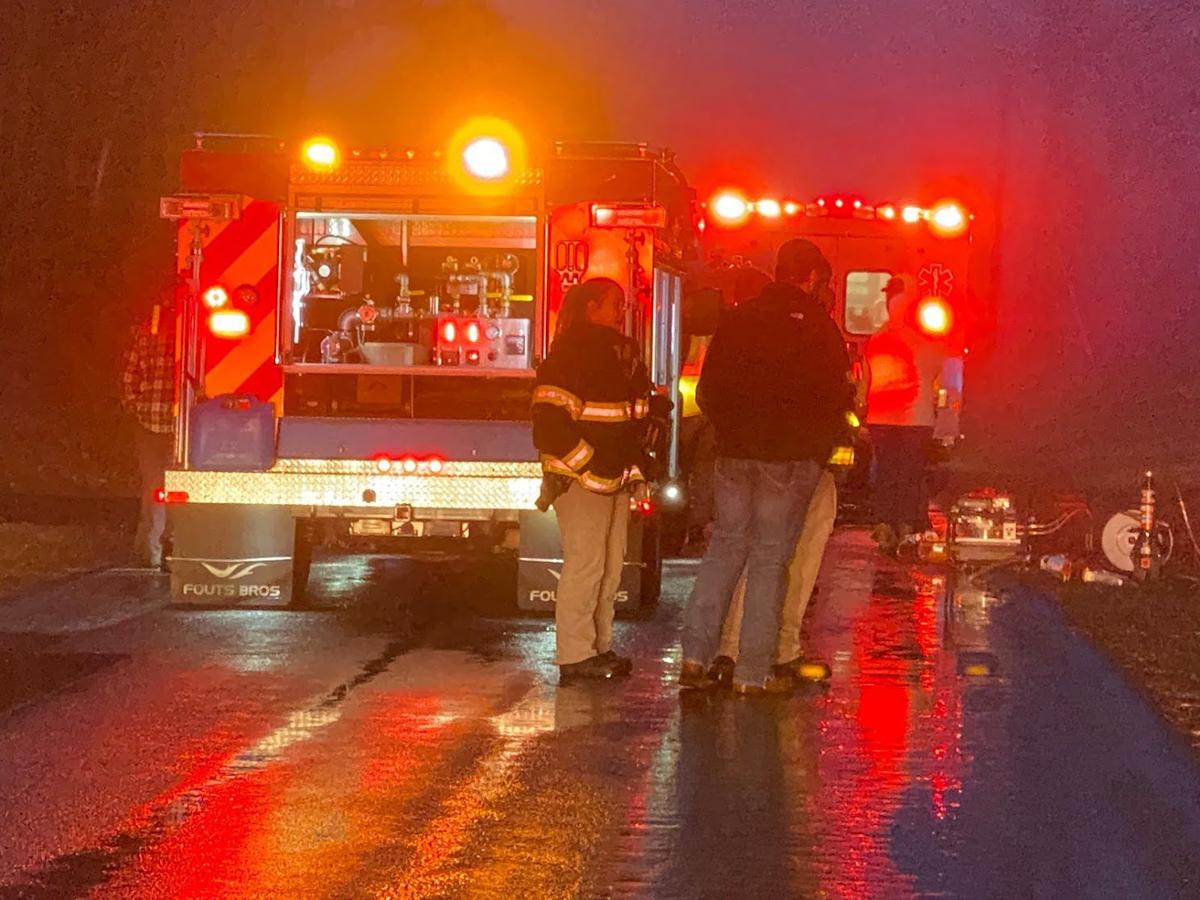 Horsepasture Volunteer Fire Department arrived at the scene to find their chief was the victim. 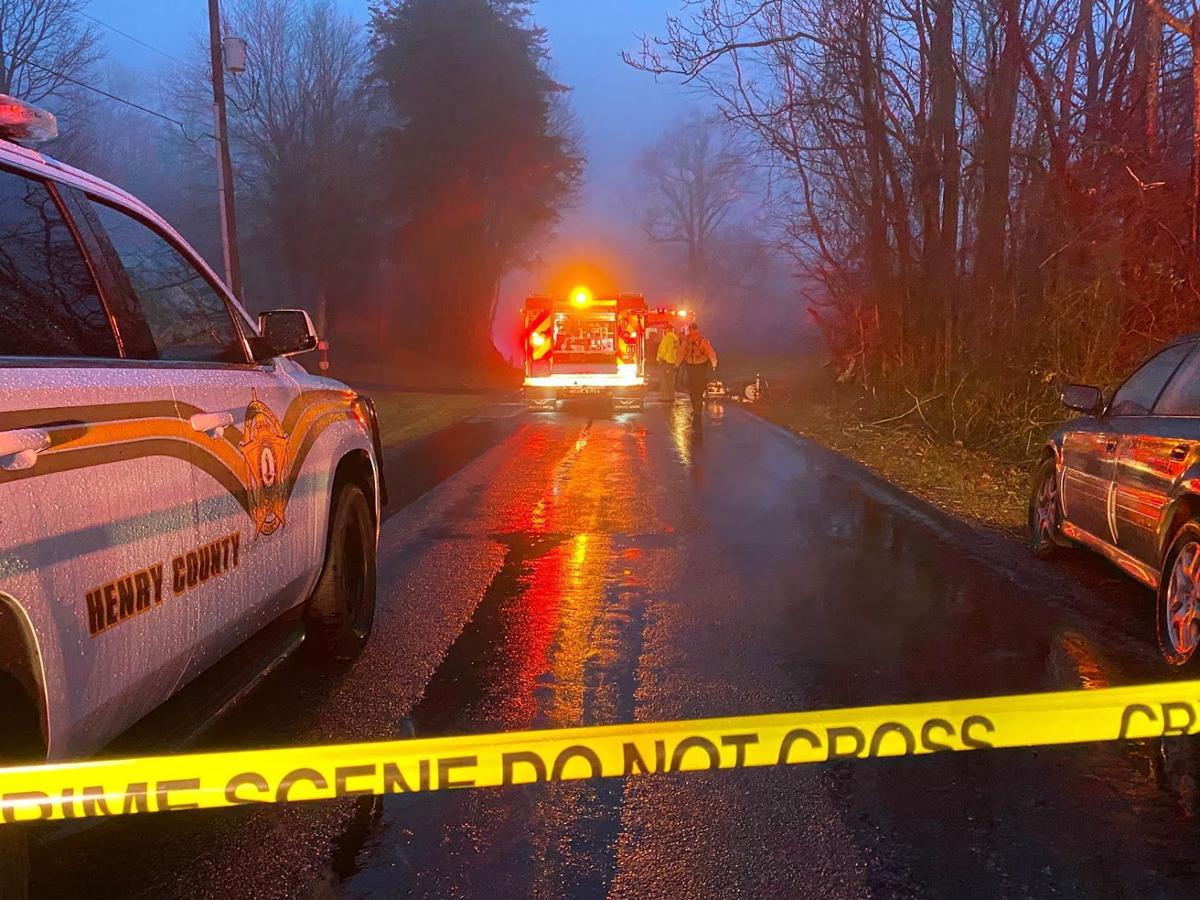 The scene of the accident is taped off. 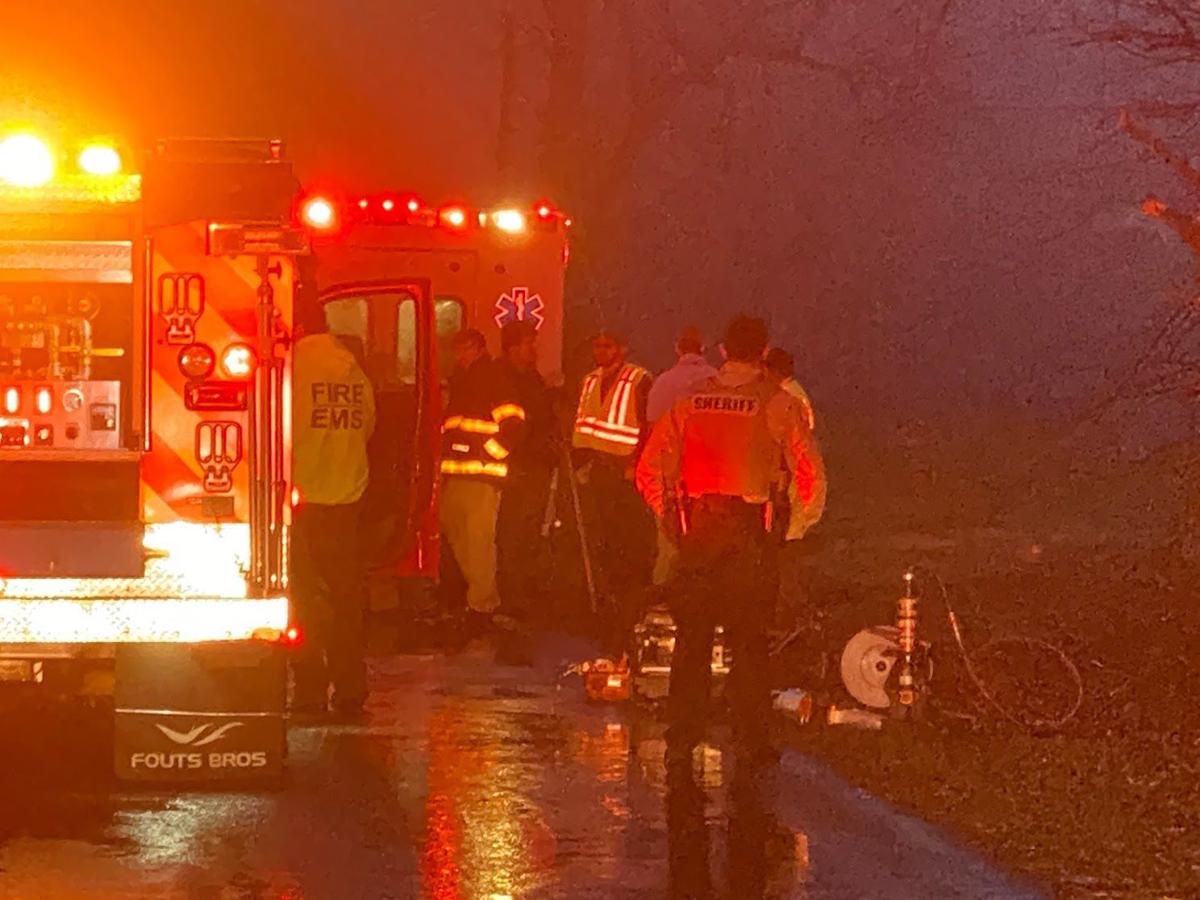 First responders at the scene.

Charlie and Sherri Bradshaw died in this crash.

The flag is lowered and a sign to memorialize the death of Fire Chief Charlie Bradshaw and his wife is posted on the marquis outside the Horsepasture Volunteer Fire Department.

Bradshaws' vehicle careened into the woods.

First responders at the scene of the crash.

Stunned rescue workers at the scene.

Horsepasture Volunteer Fire Department arrived at the scene to find their chief was the victim.

The scene of the accident is taped off.

First responders at the scene.

The Horsepasture Volunteer Fire Department was in full mourning on Saturday after the department’s chief, Charlie Bradshaw, and his wife, Sherri died in a stunning accident not far from the firehouse on Friday afternoon.

Firefighters lowered the American flag in front of their station to half mast, and they posted an “end of watch” message on the marquis.

The Bradshaws had just picked up their twin grandchildren about 4 p.m. and were traveling east on Bouldin Road in Henry County when a tree inexplicably fell on their sports-utility vehicle.

The SUV left the roadway near 109 Bouldin Road and may have clipped a utility pole before careening into a wooded area and striking a tree. Both were pronounced dead at the scene. Their grandsons survived.

“I’m not sure if they hit the utility pole or not, but the vehicle drove through the tree that struck the vehicle, and there was a utility pole down, and then there was the vehicle in the woods, a few hundred yards away,” Henry County Public Safety Director Matt Tatum said. “I couldn’t go down there and see that, I just couldn’t.”

The scene was almost surreal. The road was blocked off for hundreds of feet from the scene of the accident at both ends. A rescue worker was overheard giving directions to other responders:

“I don’t want anyone coming in here. No media, no one, unless it’s one of us.”

The Horsepasture Fire and Rescue answered the call only to arrive at the scene of a horrific automobile crash and find that it had claimed the lives of its leader and his wife.

It was an emotional scene as rescue workers from Horsepasture arrived and then many others from surrounding departments were called in to assist. Hardened rescue workers who have seen it all turned away and walked back from the crash crying and broken down.

The fire department on Saturday issued a statement about its loss:

“We are deeply saddened and regret to inform you that our Chief, Charlie Bradshaw and his beloved wife, Sherri, have passed away this evening. Chief Bradshaw was the current Chief and has been since 2007. Our thoughts and prayers are with their family and our fellow members. We will share the details of the arrangements when we find out.”

Witnesses at the scene Friday described the accident and its aftermath, and officials across the county expressed statements of sadness and honor.

“The county is saddened to learn that Horsepasture Fire Chief Charles Bradshaw and his wife, Sherri, died as a result of injuries sustained during a motor vehicle crash earlier today. Chief Bradshaw loved our community and served it well. We are grateful for Chief Bradshaw’s service, unwavering courage as a first responder and his dedication to protecting citizens. We are also very grateful for the sacrifices made for our community by his wife Sherri. We offer our prayers and condolences. I ask our entire community to pray for Bradshaw’s family, friends, employees, and fellow firefighters.”

Trooper D.A. Fulcher of the Virginia State Police was the investigating officer on the scene.

“I can confirm there are two fatalities. The bodies are still in the vehicle awaiting extraction at this time,” Fulcher said. “Due to the people involved, I’m not going to say anymore at this time. Our PIO [public information officer] is working on a press release.”

Sgt. Garletts, the designated PIO for Henry County, was unavailable and had not issued a release as of Saturday afternoon.

“Charles Bradshaw, captain of the Horsepasture Volunteer Fire Department, civic leader and owner of Triangle Electric and his wife, Sherri, were killed in an automobile accident this evening on Bouldin Road. Our thoughts and prayers go out to the family,” Horsepasture District Supervisor Debra Buchanan said.

Charlie Bradshaw, 62, received Henry County’s highest honor, the Jack Dalton Community Service Award, in 2005, and his mother, Nancy Bradshaw, had received the same award in 2008. His mother passed away in June of this year.

CORRECTION: An earlier version of this report stated incorrectly the gender of the grandchildren.