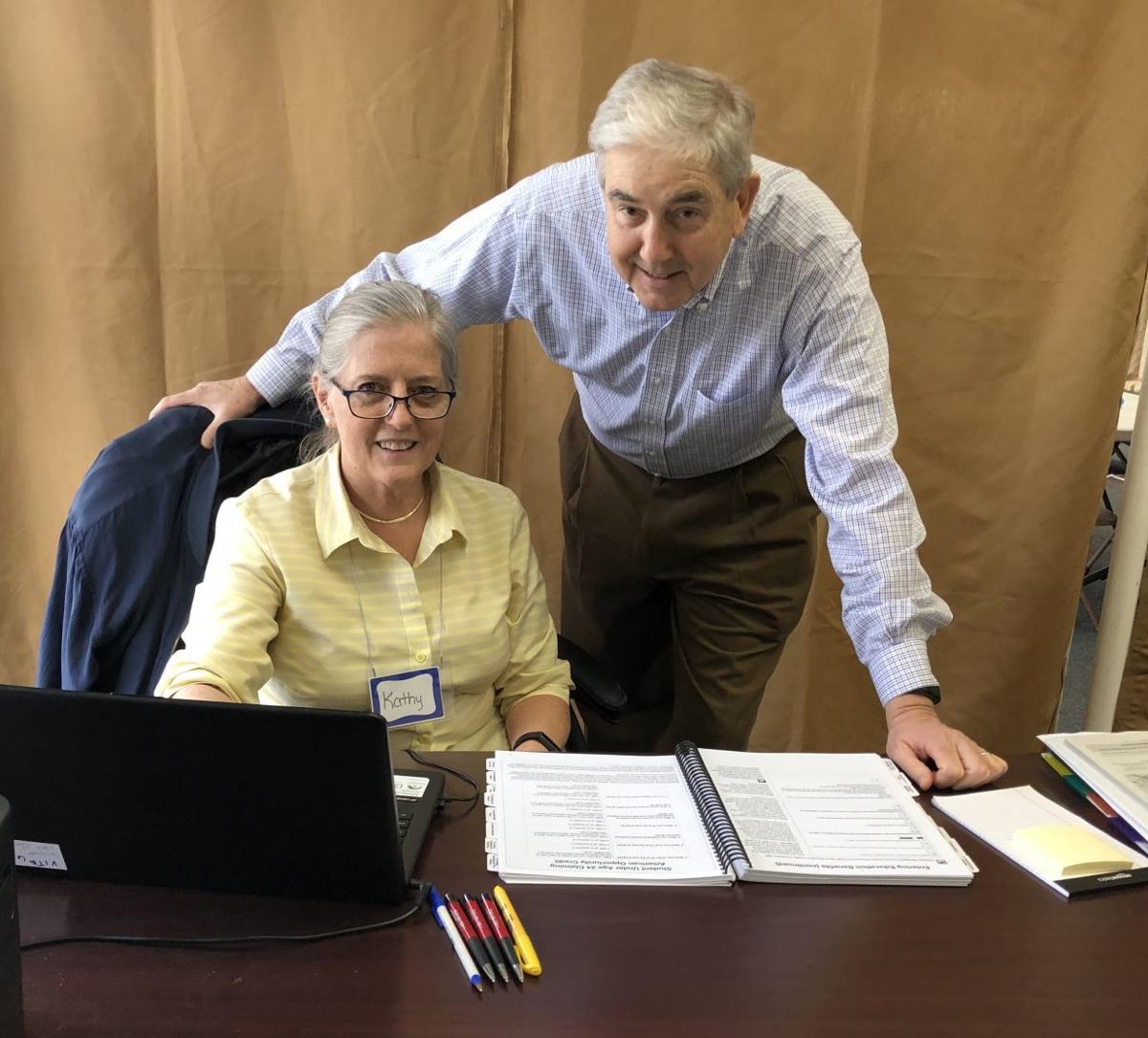 Kathy Long always prepared her own tax returns, she said, and she has been filling out other people's tax returns as a volunteer since 2007. When her husband, Hank, retired from Hooker Furniture two year ago, he joined her helping with Volunteer Income Tax Assistance, which this year operates out of the Leatherwood Shopping Center. Kathy Long retired as a flight attendant two weeks ago. 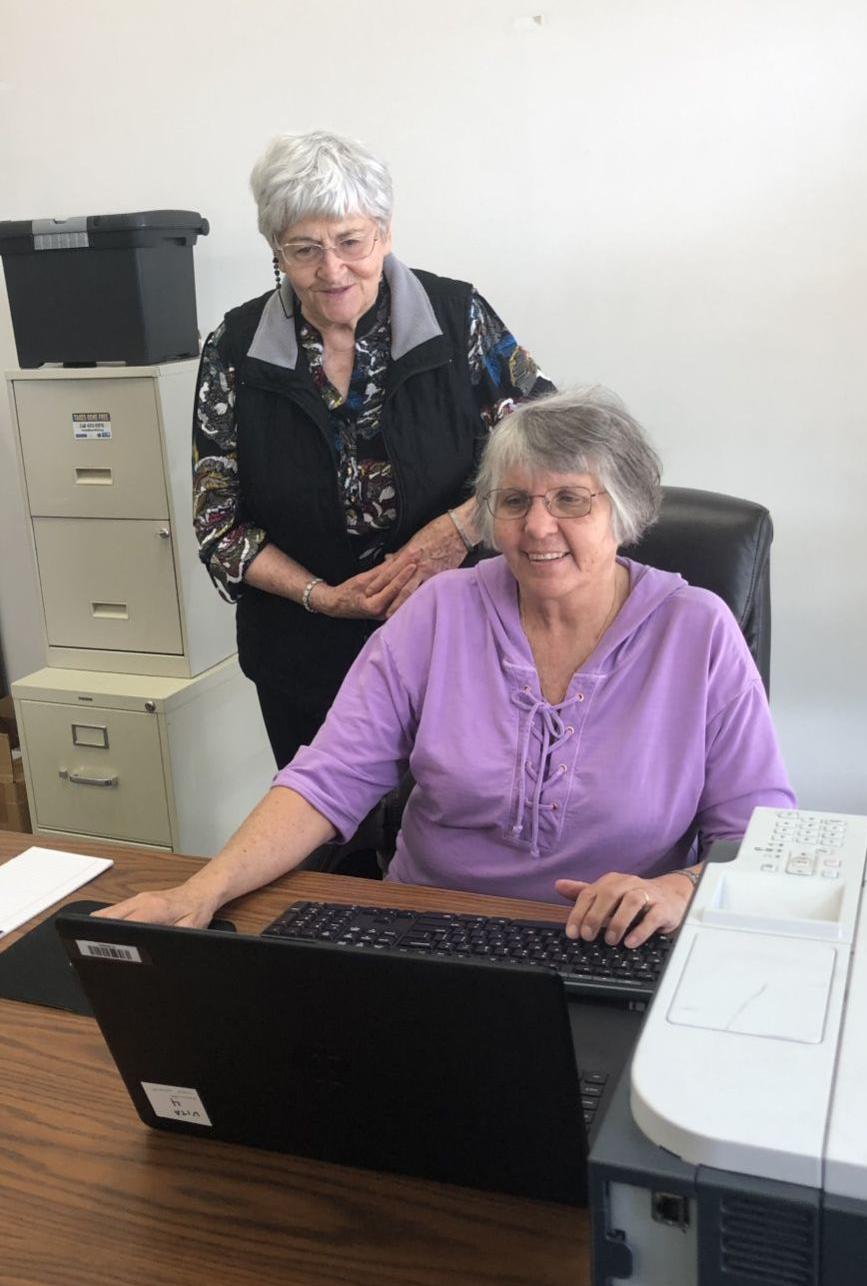 Glenda Hager (standing) volunteers as a receptionist at the VITA site, and Rachel Young (seated) prepares people's tax forms. They say the enjoy the work, and also spending time with each other and the other volunteers at dance classes and local restaurants when they aren't volunteering.

Kathy Long always prepared her own tax returns, she said, and she has been filling out other people's tax returns as a volunteer since 2007. When her husband, Hank, retired from Hooker Furniture two year ago, he joined her helping with Volunteer Income Tax Assistance, which this year operates out of the Leatherwood Shopping Center. Kathy Long retired as a flight attendant two weeks ago.

Glenda Hager (standing) volunteers as a receptionist at the VITA site, and Rachel Young (seated) prepares people's tax forms. They say the enjoy the work, and also spending time with each other and the other volunteers at dance classes and local restaurants when they aren't volunteering.

Kathy and Hank Long have a fun way of filling their winter hours, when otherwise there’s not much to do, he said.

They fill out tax forms.

Hundreds of them, or perhaps thousands.

The Longs are among the 15 volunteers with VITA, the United Way’s Volunteer Income Tax Assistance Program.

Rachel Young’s reason for volunteering there is simple: “I enjoy doing taxes. I enjoy doing numbers.” Her husband, Frank, also helps out, taking on various other roles as needed.

VITA tax preparation is free for people who have an income of $56,000 or less, persons with disabilities and limited-English-speakers who need assistance in preparing their own tax returns. It is operated by the United Way through its Financial Stabilities initiatives.

To be seen, a person needs to take a photo identification for self and spouse; Social Security cards and birth dates for self, spouse and dependents; all federal and state income forms, including W-2, 1098, 1099 and 1095; and bank routing number along with checking/savings account number for direct deposit. Both spouses must sign the return in the presence of tax preparers when filing as married filing joint.

The program is funded by Virginia CASH Campaign (Creating Assets, Savings and Hope), The Harvest Foundation, the IRS and the United Way and uses equipment provided by the IRS. The Lester Group donates the space for the VITA Walk-In site.

Kathy Long retired as a flight attendant for Delta on Jan. 31, but she has been preparing tax forms for free since 2007.

She has been a longtime volunteer for Grace Network, she said, and that year, she, Pam Allen and a few other volunteers decided to help Grace Network’s clients by filling out their taxes for free. They got training in how to do it, then filled out 53 tax returns that first year.

Grace Network and the United Way were preparing taxes for free separately for a few years before the two groups realized it made sense to do it together, she said.

When her husband retired two years ago from Hooker Furniture, he joined her with VITA.

Rachel Young has been volunteering for VITA for almost as long as it has been offered in the area: since 2008. She has filed taxes through VITA at its various locations, including the former Liberty Fair Mall (when Chick-Fil-A was there, she said, the restaurant took orders for free lunches for the volunteers every day), a free health care clinic, the former Texas Steakhouse (“We called it ‘Taxes Steakhouse,’” and the lighting there was romantic), Lester Home Center, Stanleytown Baptist Church, Nelson Toyota, Nelson Chevrolet, Blue Ridge Manor, four county schools, four churches on Fayette Street, the Collinsville Y and Patrick Henry Community College.

This year’s location is in the Leatherwood Shopping Center, where Chatham Road (Va. 57) meets Va. 58 near Chatmoss. The building is a former video rental site. It is an open area, with bright sunlight coming from large windows, and a wide wallpaper border along the top of the space has colorful symbols of movies.

For the past several years the sites have been donated by The Lester Group. “We have been very fortunate,” Young said. “They’ve been scrambling to find places.”

Young had a career in the numbers. She was a tax preparer in the 1980s, and from 1985 to 2002 “was the girl in one-girl offices,” doing accounting and payroll tasks. She worked part-time for 10 years doing accounting for Sears, which closed just a couple of months after her retirement in 2002.

Helping people is important to her, she said.

Clients who get their taxes prepared through VITA “save a minimum of $150” over what they would pay at other sites, and “what goes out of here is correct,” she said.

All VITA tax preparers have been trained in an IRS program, and each return is checked for accuracy by a second tax preparer, she said.

The preparers analyze people’s situations to get them the maximum benefit, Young said. That includes Earned Income Tax Credit. It’s a form of assistance for low-income families. An example would be a family that makes between $16,000 to $24,000 a year with three kids: They would receive $8,000, between EITC and child tax credits. Some families “really bank on that to get them through the rest of the year,” she said.

The VITA tax preparers also give financial advice if they aren’t rushed to get to other clients, she said. They advise how to dole out that $8,000 carefully to have that money throughout the year, for example, or explain how retirement accounts grow when young people take advantage of employer-matched contributions.

“That’s rewarding, when you see the look on their faces” as they start to understand, she said.

While the numbers of clients helped is growing each year – last year’s number of tax returns was 400 more than the year before, and this year’s is looking to be higher yet – the number of volunteers is dwindling.

Where there used to be between 20 and 40 volunteers, it’s down now to just 15, low enough so they had to drop having an additional site on the other end of the county, Frick said.

Yet volunteering with VITA is an enjoyable way to spend time and to help people in a way that makes a solid, measurable benefit to them, she said.

Anyone, regardless of income, can file their own taxes for free through programs listed by the IRS on its website: https://www.irs.gov/filing/free-file-do-your-federal-taxes-for-free.