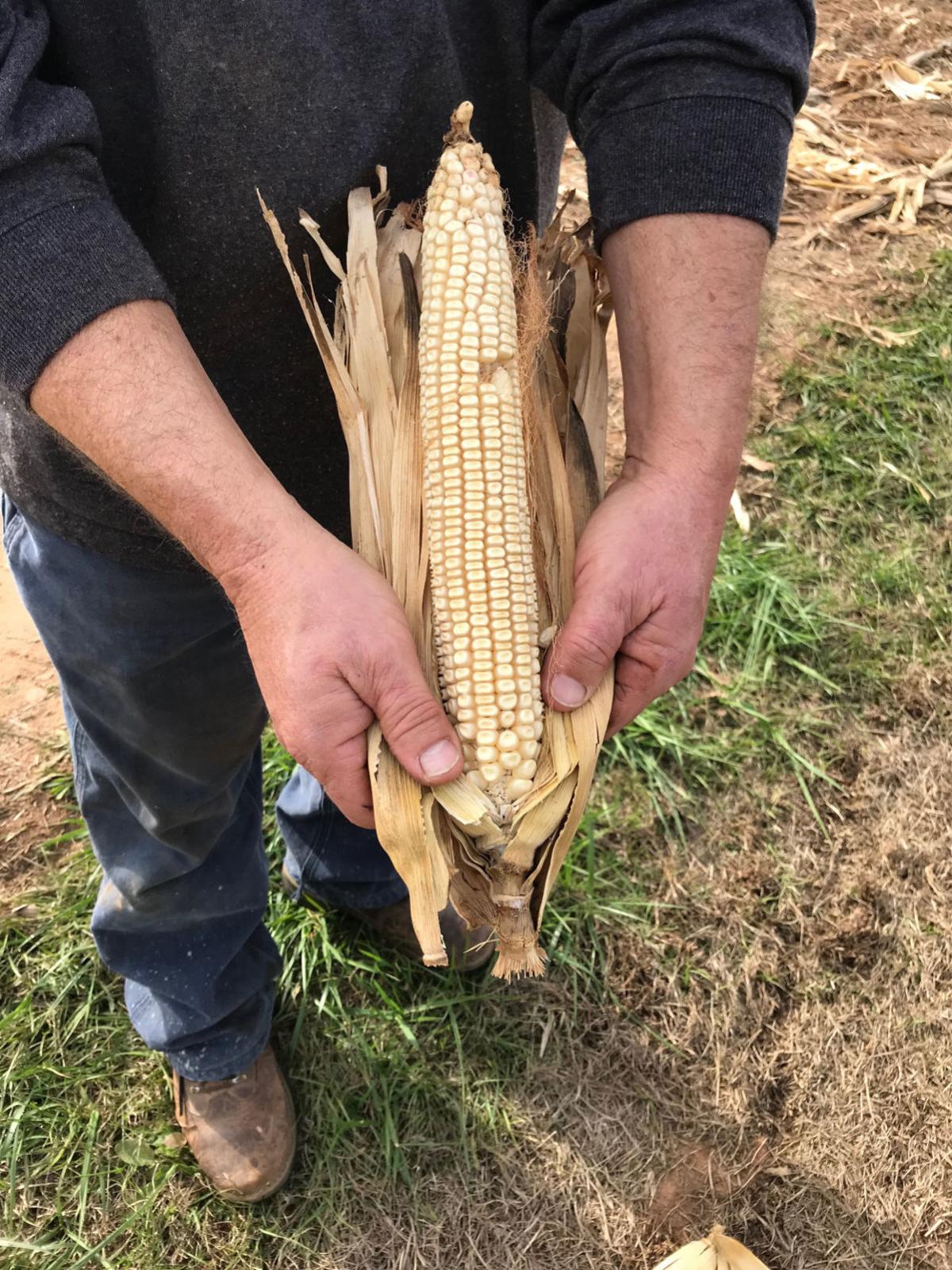 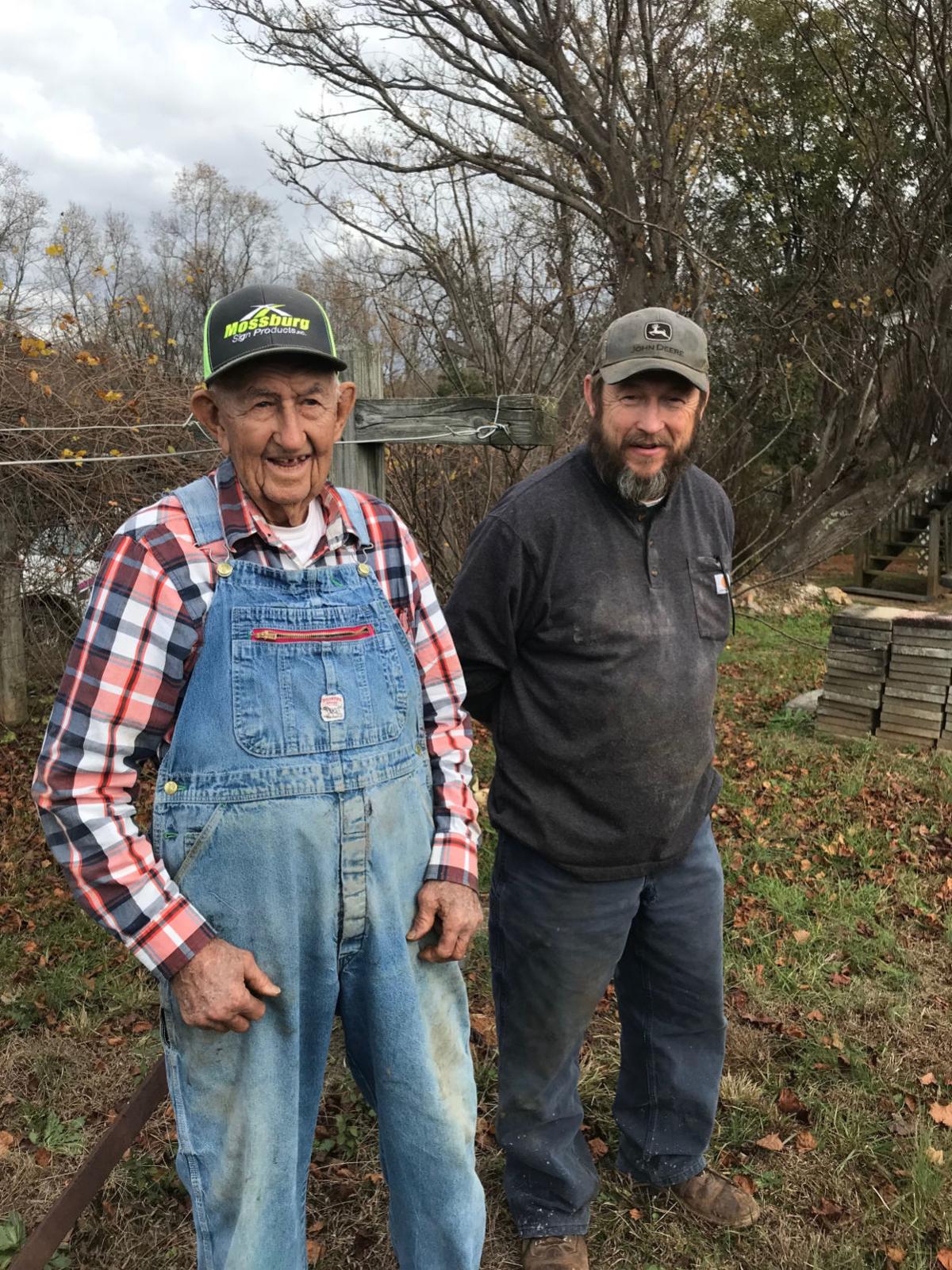 Manning Farmer and son Darrell Farmer on their farm in Landrum, S.C. 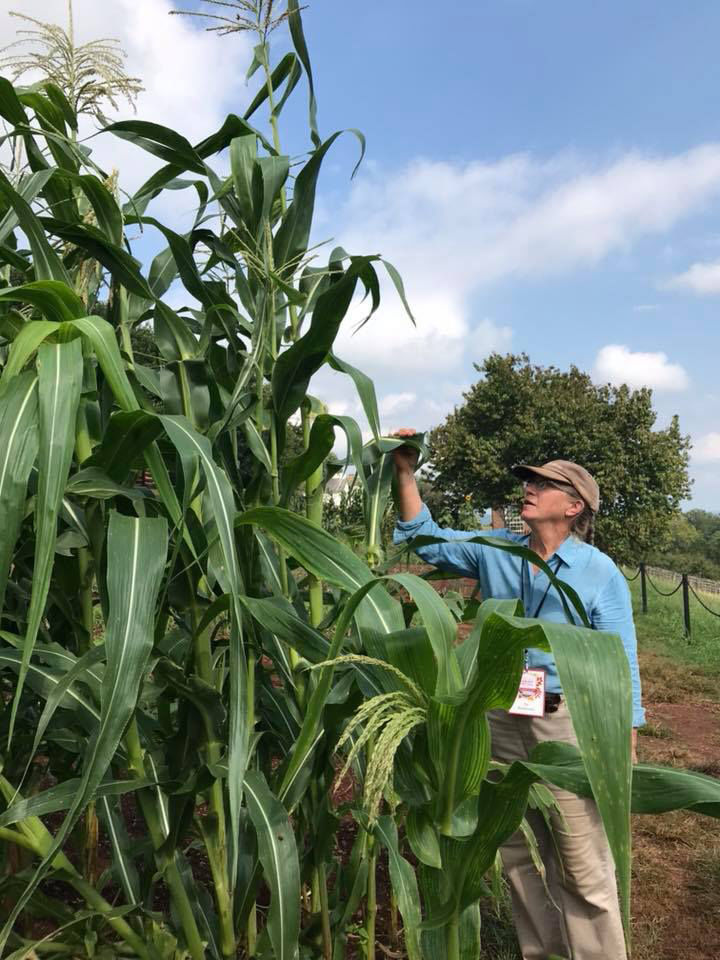 One of the endearing aspects of the Thanksgiving meal is the way families bring their additions to the common fare and, in time, forge their own culinary traditions.

For the Farmer family in Landrum, South Carolina, the day is usually marked with a cornbread dressing. The cornbread comes from a dent corn variety that the aptly named Farmers actually grow on their 60-acre farm 10 miles south of the North Carolina border.

Making your own cornbread is not as easy as you might think. You can cut a head of broccoli or pull a tomato without undue fuss, but to get corn meal from the field to the kitchen, you have to shepherd the corn through an entire growing season and put it through the mill. Fortunately, the family's 97-year-old patriarch, Manning Farmer, has been doing this for most of his life and, to boot, has his own gasoline-powered grinding stones.

He grows a variety of corn that is remarkably large and white, and when it is ready on the stalk it is wrapped in papery husks the color of linen. The kernels - indented, hence "dent corn" - look as if they were carved from ivory.

In old varieties such as this, the kernels can be saved and sown the following spring for a perpetual harvest.

Farmer has been growing this variety every year since the 1940s because he likes its old-time taste and to honor and remember his father, who was killed in an accident in 1945. His uncle and father had been growing this white dent corn variety since the 1930s. Farmer knew it as Cox Prolific.

To earn a little extra income, Manning and his son Darrell have been growing additional rows in recent years so a friend can sell some of the seed for them on Craigslist.

That is one side of the tale. On the other is the Southern food historian David Shields, a professor of English at the University of South Carolina. Dent and flint corn varieties, for grits and cornbread (and sometimes for moonshine), were the predominant Southern homestead corn long before summer sweet corn was developed as part of the sugarization of the modern palate.

But many of these old heirloom varieties have receded or vanished over the past century, as family farms died off and Big Agriculture turned to fewer hybrids with greater crop yields and other attributes.

For more than 15 years, Shields has been actively searching for lost antique varieties that once added distinction to Southern cuisine. At the top of his list was a sweet-sour strawberry named Neunan's Prolific, which he now believes is extinct. Second was the American strain of African Red Eggplant, whose last known seed was destroyed in a Louisiana seed house fire 11 years ago. Number three was Cocke's Prolific dent corn, bred by a friend of Thomas Jefferson, John Hartwell Cocke, on his plantation in central Virginia.

The corn was quickly adopted by other growers in Virginia because it produced at least two ears per stalk, the definition of a prolific variety. The corn was delicious roasted before the kernel hardened, made superlative meal and provided great winter fodder for livestock.

It became the first commercially important prolific variety, and by the late 19th century, it was grown across the United States, Shields says.

It was slowly abandoned in the first decades of the 20th century, replaced by an abundant, cheap Midwestern variety, Reid's Yellow dent, and by Hickory King, a white dent better adapted to poorer soils in the South, Shields told me. Commercial availability of Cocke's Prolific ceased by the end of World War II, and by this century, it was "functionally extinct," he said.

Angie Lavezzo of Sow True Seed in Asheville, North Carolina, is a self-professed "heirloom seed nut" who is always looking for heritage, open-pollinated varieties to add to the company's catalogue. "I look in a lot of strange places, and I found on Craigslist someone listing Cox's Prolific," she said. She didn't know the variety but bought it nonetheless, around the same time Shields, a friend, put out his list naming Cocke's Prolific.

She sent him a picture of the seed, he was encouraged, and together they went to see the Farmers "and we connected more dots," she said. Shields had it genetically tested, to see whether it might match another known variety, but it came back as something pure and unique, at which point they were confident they had found the lost treasure. "It's rare that something that has disappeared for so long - that we actually find it again," she said. "I was over the moon about it."

When Shields encountered the corn at the farm, it looked just like the one in an old photo he had kept for years. "He was like a kid at Christmas," Darrell Farmer said. "He was tickled to death."

Manning Farmer is slowing down and is hard of hearing, and I was unable to reach him by phone, but his son said he and his father grow it in isolated fields away from other corn (to prevent cross pollination and seed contamination) and in areas of the farm that are on high ground and on bottomland. This was insurance against years of either drought or flood. It is used to make grits and cornbread, to sell as seed, and, when the Farmers kept livestock, to feed the cows, horses and mules.

In years of scant harvest, the Farmers, like all savvy seed savers, learned to ration their consumption to save enough to sow the following spring.

When Shields arrived at the farm, he had one pressing question. " 'Why didn't you tell me you had it?' " recalls Darrell Farmer. "And I said everyone in the neighborhood knew we had this corn."

"This was the beginning of a whole line of prolific corns, and what really struck me was that it was only one person still growing it," Shields said. "If it hadn't been for Manning Farmer, if he had died early, there was no assurance that Darrell would have continued it." Such is the fragility of old varieties that have been generally discarded and kept alive by one family and rediscovered only by serendipity.

This year, and with its first commercial availability in decades, Cocke's Prolific has been voted onto Slow Food's Ark of Taste.

Charles Cocke, a descendant who lives in Charlottesville, said he was thrilled by the discovery and planned to plant it on bottomland next season. (He grew some in hilly rows this year, which turned dry, and with disappointing results.) "We're a very old Virginia family, we came here in 1630, so it's kind of neat to have this corn seed out there," he said.

These old, perpetual varieties are not as productive or disease-resistant as modern hybrids, but they preserve genetic diversity along with the cultural DNA of our past. Unlike most modern commercial corn seed, they are neither owned by a multinational corporation nor genetically engineered. They are hopelessly out of date, imperiled and priceless. How does Cocke's Prolific taste?

"It's an excellent Appalachian corn, it tastes of home to me," said Greg Johnsman, who grew up near the Farmers and is now a miller on the other side of the state, near Charleston. He mills versions of Cocke's Prolific, working with a handful of family farmers to supply his enterprise, Geechie Boy Mill in Edisto Island, South Carolina.

He sells the milled products nationwide, mostly to markets and restaurants. This year's first major production of Cocke's Prolific meal "is almost all sold and we haven't even put it on the market," he said. I tried Cocke's Prolific grits that Johnsman sent me, and it is extraordinarily rich and flavorful. Johnsman also traveled to the Farmers to pick up some seed. "I'm still in disbelief," he said. "I didn't think you could come up with a corn that big a deal and which created such a change, and then it goes missing."

I came across Cocke's Prolific this fall at Tufton Farm, Jefferson's farm next to Monticello, where it has been reintroduced to central Virginia. I have never seen an ear of corn so long or handsome, not jeweled like Indian corn, but elegant and talismanic.

As for Manning Farmer, his son told him he was "Facebook famous. I had to explain to him what that was. I told him you're doing something a lot of people can't do, you're preserving something on our farm created in the 1800s."

The mass planting of spring bulbs is easier if you are able to dig a trench rather than using a bulb planter. A shovel works in good soil; use a mattock in heavier ground. Don't let bulbs touch. If voles are a problem, surround the bulbs with pea gravel before backfilling the soil.