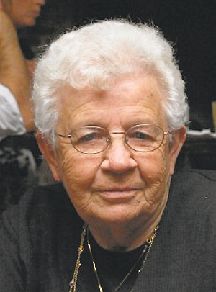 Aileen Franklin Fleming, 87, of Martinsville, Va., passed away on Saturday, August 31, 2019. She was born in October 11, 1931 in Bassett, Va., (Blackberry Community) to Henry Harrison Franklin and Della O'Brien Franklin.

In addition to her parents, she was preceded in death by her husband, Roger Guilford Fleming, four brothers and three sisters.

Aileen was a member of Blackberry Baptist Church and was a seamstress for many years.

A graveside service will be at 2 p.m. on Friday, September 6, 2019 at Roselawn Burial Park and will be officiated by Reverend Sammy Ballard. Following the service the family will receive friends at Aileen's residence.

In lieu of flowers, memorials may be made in Aileen's memory to Hospice of the Piedmont, 1801 Westchester Drive, High Point, N.C. 27262.