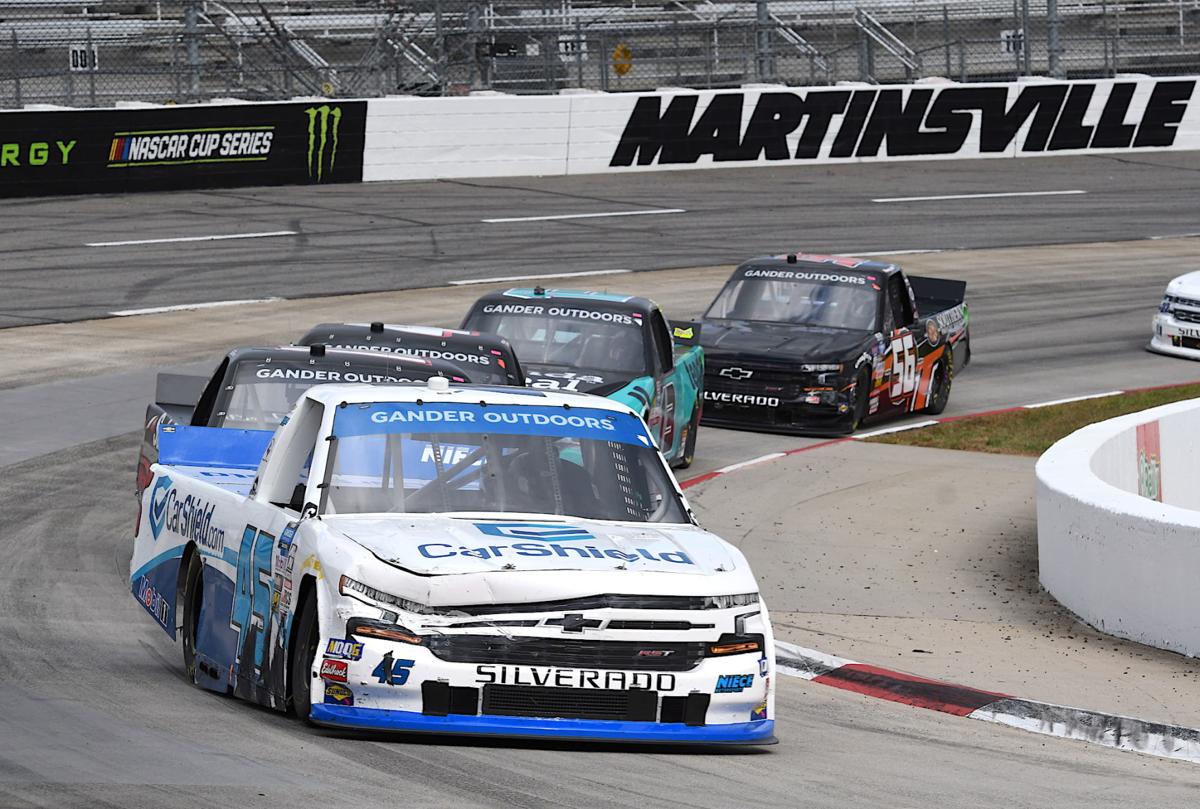 Ross Chastain pilots his Chevy Silverado during the NASCAR Hall of Fame 200 on Saturday at Martinsville Speedway.

Ross Chastain (45) and Austin Hill (16) make a turn during the NASCAR Hall of Fame 200 at Martinsville Speedway. 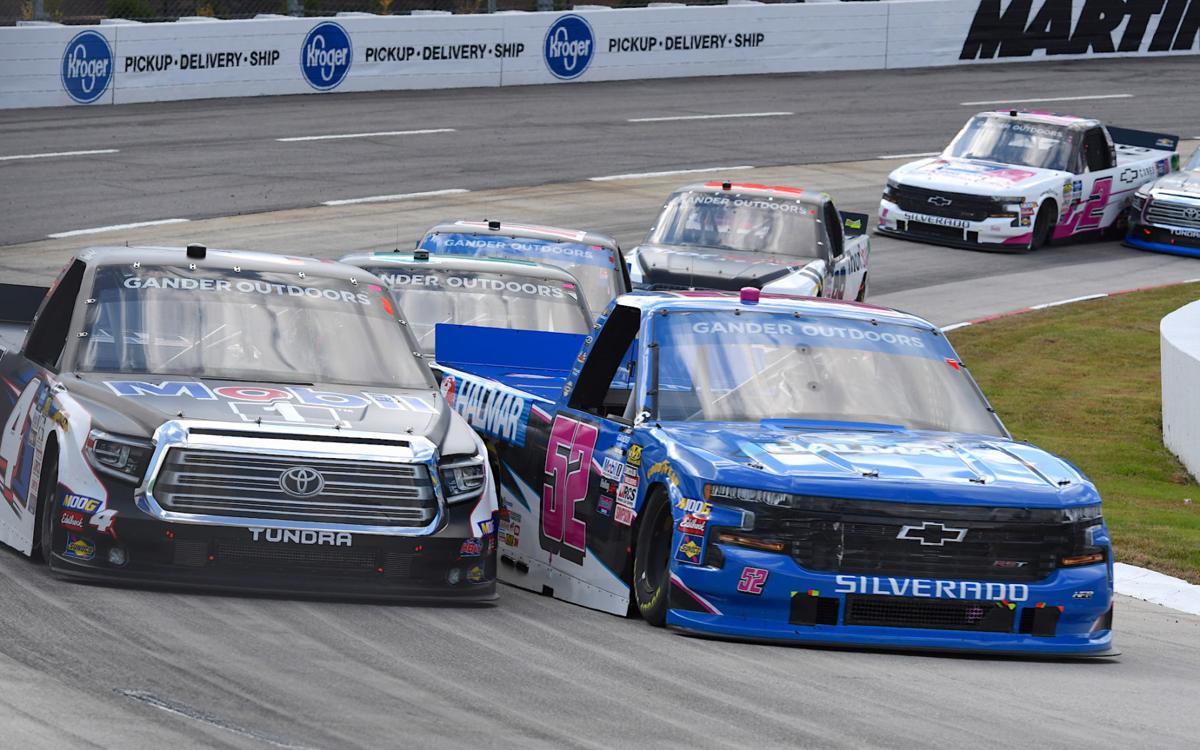 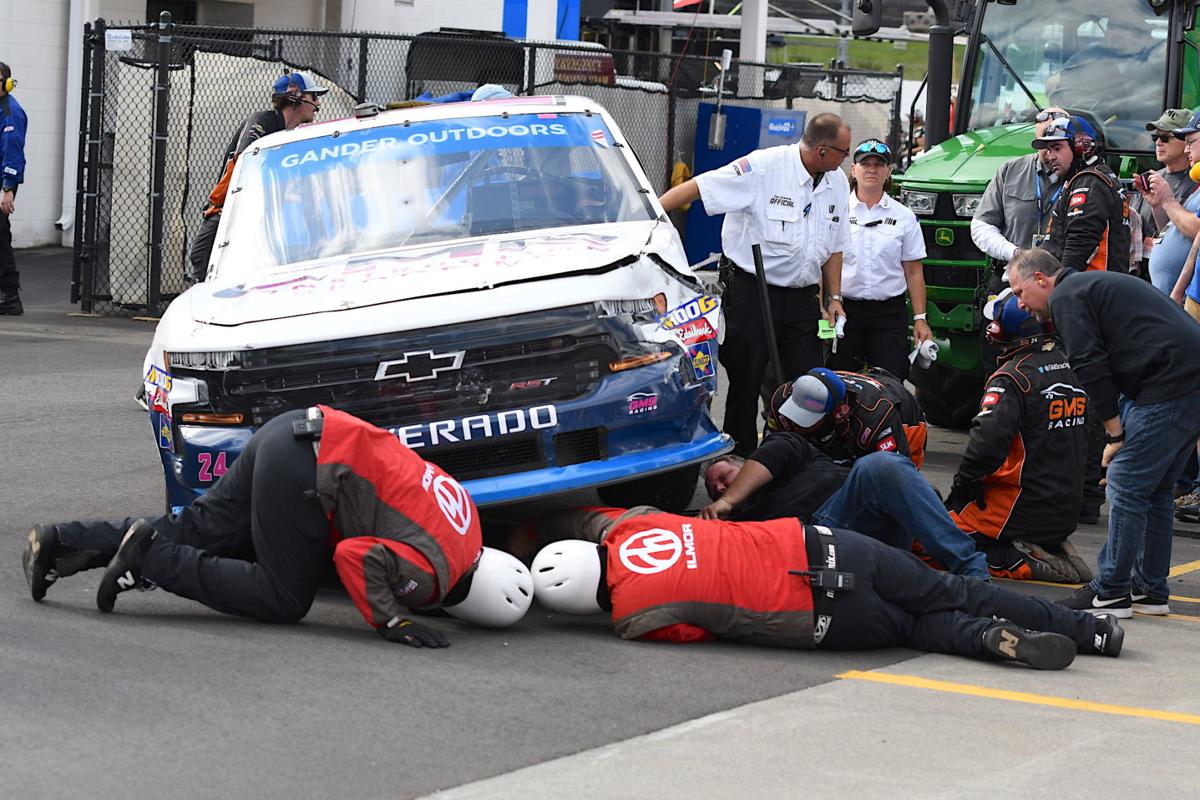 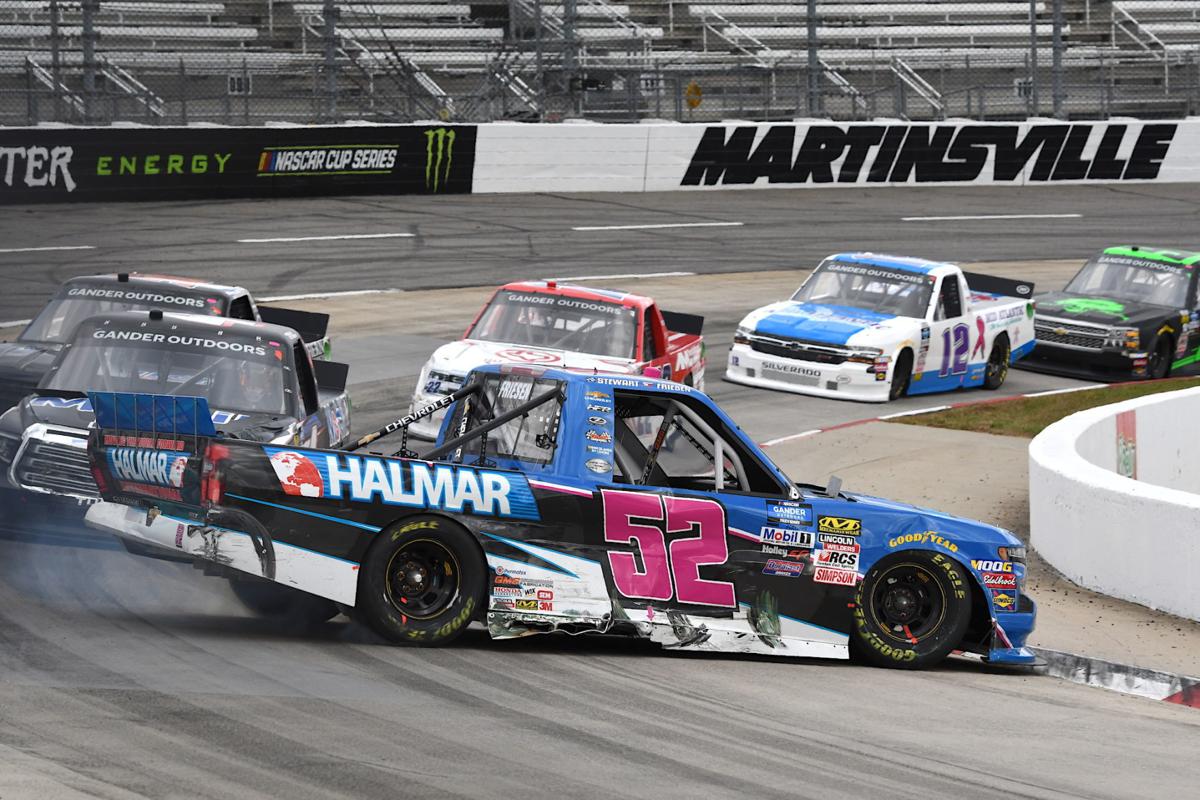 Stewart Friesen (52) spins out during Saturday's NASCAR Hall of Fame 200 at Martinsville Speedway. 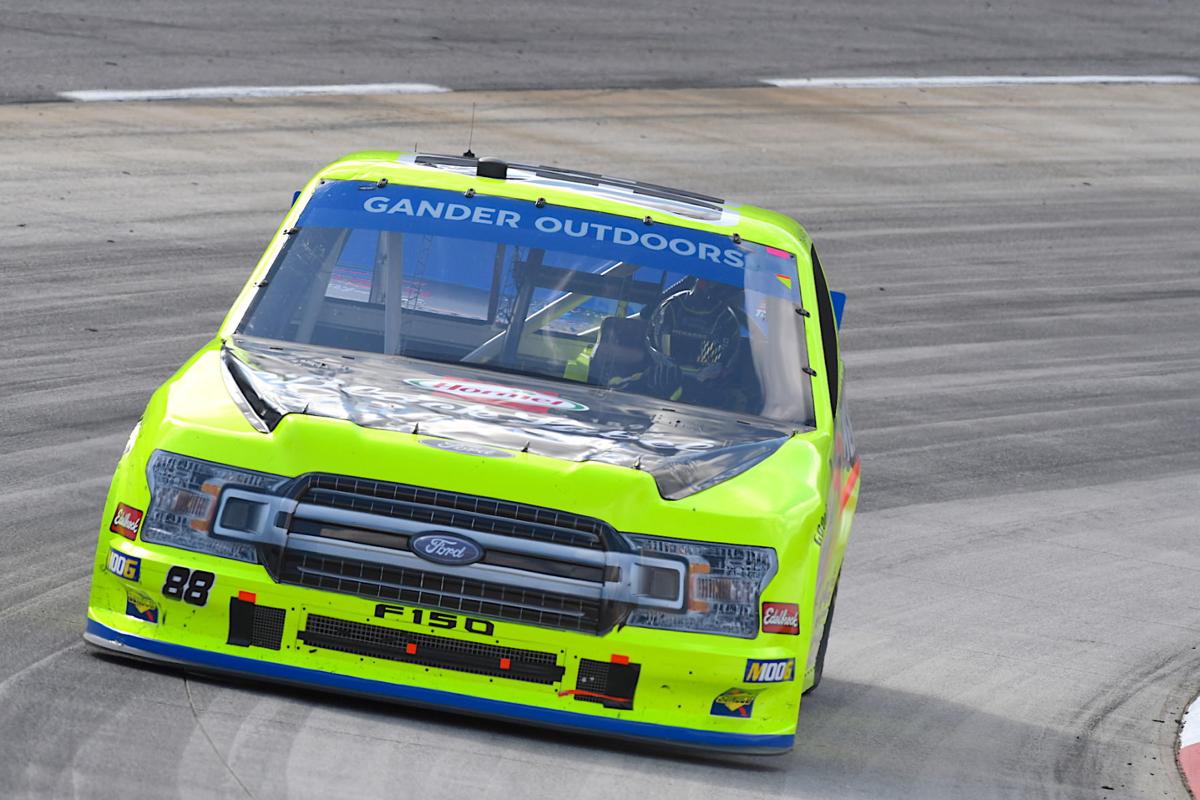 Matt Crafton drives during the NASCAR Hall of Fame 200 at Martinsville Speedway. 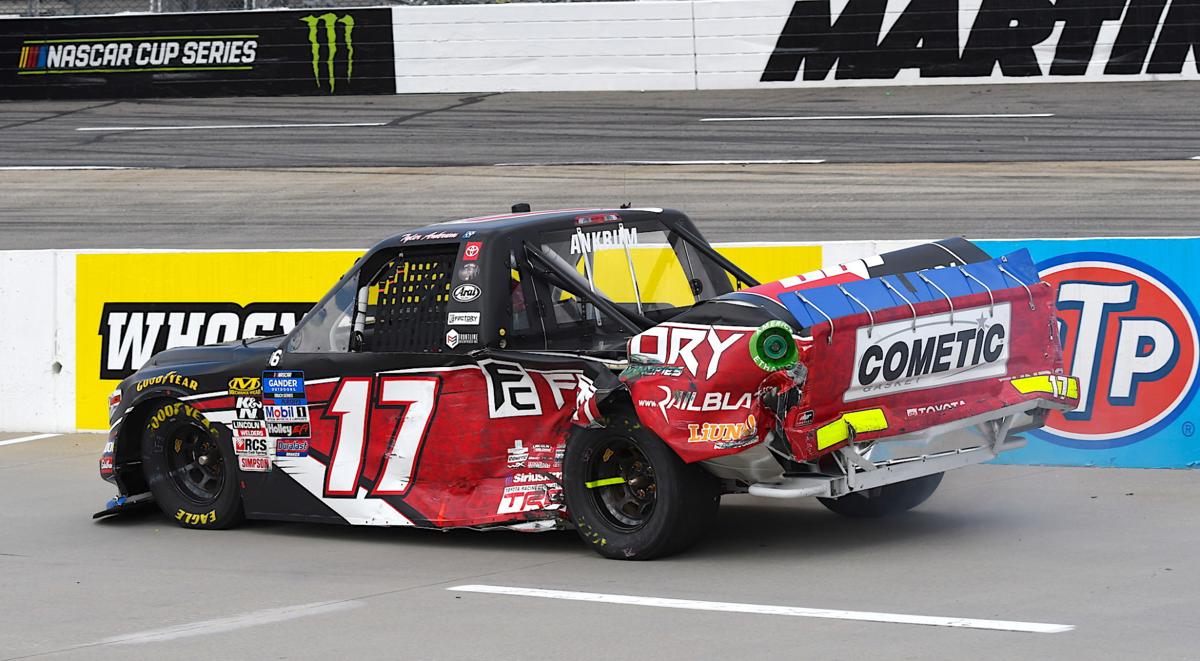 Ross Chastain pilots his Chevy Silverado during the NASCAR Hall of Fame 200 on Saturday at Martinsville Speedway.

Ross Chastain (45) and Austin Hill (16) make a turn during the NASCAR Hall of Fame 200 at Martinsville Speedway.

Stewart Friesen (52) spins out during Saturday's NASCAR Hall of Fame 200 at Martinsville Speedway.

Matt Crafton drives during the NASCAR Hall of Fame 200 at Martinsville Speedway.

It was a decidedly mixed bag of results on Saturday at Martinsville Speedway for the six drivers currently in the Gander Outdoors Truck Series playoffs.

Half of the group was out of the NASCAR Hall of Fame 200 by Lap 140, clearing the way for the other three to earn those crucial points in the championship race.

Here is how their days played out.

Chastain had the most to gain out of Saturday, and he made the most of his chances.

He entered the race sixth in the playoff points standings, two points out of the top four, and led 68 total laps. Chastain started 12th but worked his way into the top 10, ultimately taking over the top spot on Lap 122.

He lost the lead on the final restart and had to watch Todd Gilliland lead the final 11 laps to claim the victory.

“The truck was fast. Once we got out front, we were able to hang on,” Chastain said. “We’re lucky to come home second.”

Chastain’s previous best finish at Martinsville Speedway was fourth—earned March 23 this season during the TruNorth Global 250.

Still, he finished one spot out of where he truly wanted to be. A victory would not only have netted him a prized grandfather clock, but he would have secured his spot in the final four of the playoffs with a chance to win at Homestead-Miami Speedway on Nov. 15.

Chastain can still qualify for the championship if he wins Nov. 8 in Phoenix or if he otherwise hangs on to a top-four spot in the standings.

“We go there the same way we came here, trying to win,” Chastain said of Phoenix.

Shortly after Chastain took his lead, Hill was involved in a multi-car accident that brought significant damage to his truck, among many others.

Hill, who was third in points and started 17th overall, was running in the top five at the time of the wreck. He got caught up in the fray caused when Sam Mayer bumped Grant Enfinger from behind, spinning out the latter and dropping Hill to 20th.

“We got kind of sandwiched in the middle and hit from all kinds of ways,” Hill said upon his release from the medical center. “The good news is a lot of other playoff guys are having trouble, so that doesn’t make it too bad. I’d rather be out there competing, though.”

Friesen started seventh in the race and moved up and down throughout—sometimes running in the mid-teens and other times challenging in the top five.

Friesen blew a tire on Lap 149, bringing out a caution. He was running fifth at the time.

Ultimately, he avoided the accidents that picked off some of his peers and managed to place sixth.

Moffitt, who entered as the points leader and started second, won the first stage and led 80 total laps before bowing out with 78 laps to go due to truck damage.

He also turned his attention to his next opportunity to win and secure a spot at Homestead.

“We’ll go to Phoenix and try to win there,” he said.

Crafton started fourth and was fourth in the playoff points, just one point ahead of Ankrum. His start to the race was marred by an engine power issue, however, and he eventually rejoined the race eight laps behind the leaders.

“It just shut off,” he said. “It’s a common theme we have with the motors we’re forced to run in the Truck Series. … It’s a shame because our truck was phenomenal.”

Crafton’s strategy late in the race was simply to stay alive so as to avoid a similar fate of his fellow playoff contenders.

“We knew we weren’t going to get back on the lead lap,” he said. “We just rode around there and did what we had to do to finish the race where we were. We hated to see it with some of the other guys, but at the same time, it was a fortune for us.”

Get ready for the First Data 500 at Martinsville Speedway

Saturday brought an upset victory in the Gander Truck Series playoff race. What will unfold today at the Paperclip? Here's everything to get y…