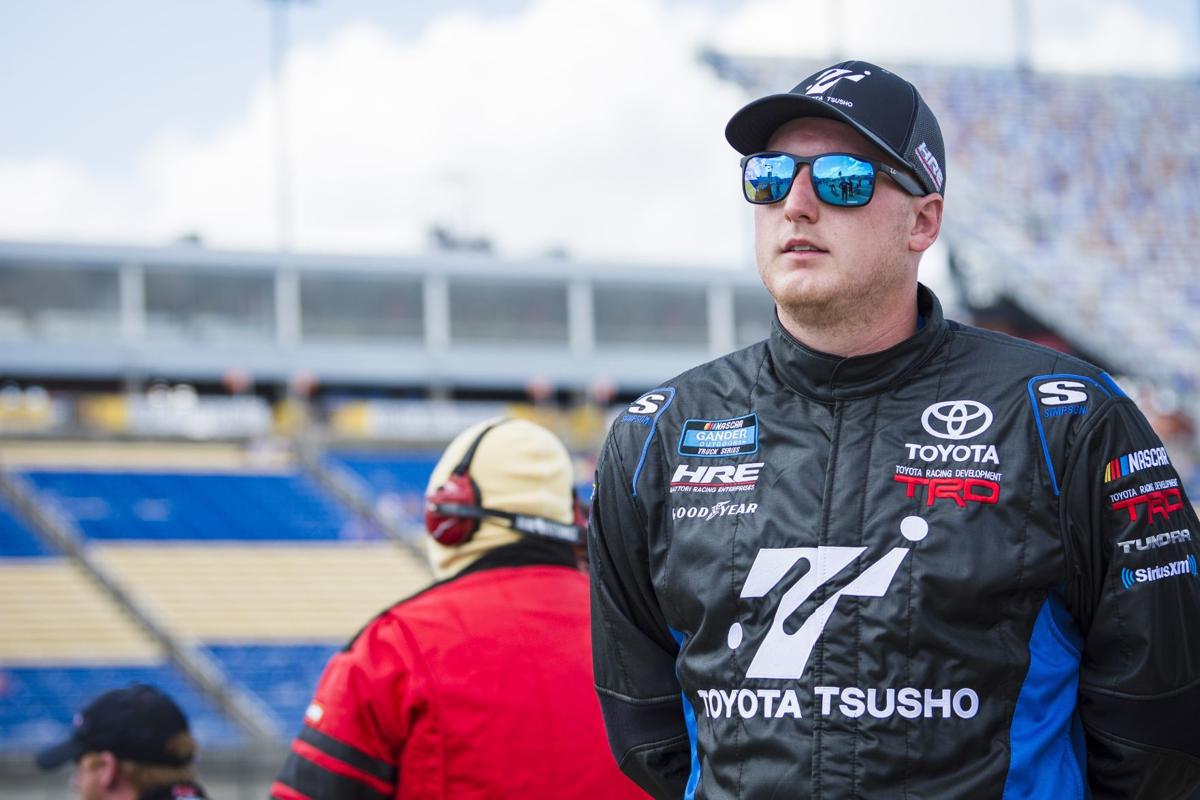 Austin Hill during the Buckle Up In Your Truck 225 at Kentucky Motor Speedway on July 11 in Sparta, Kentucky. 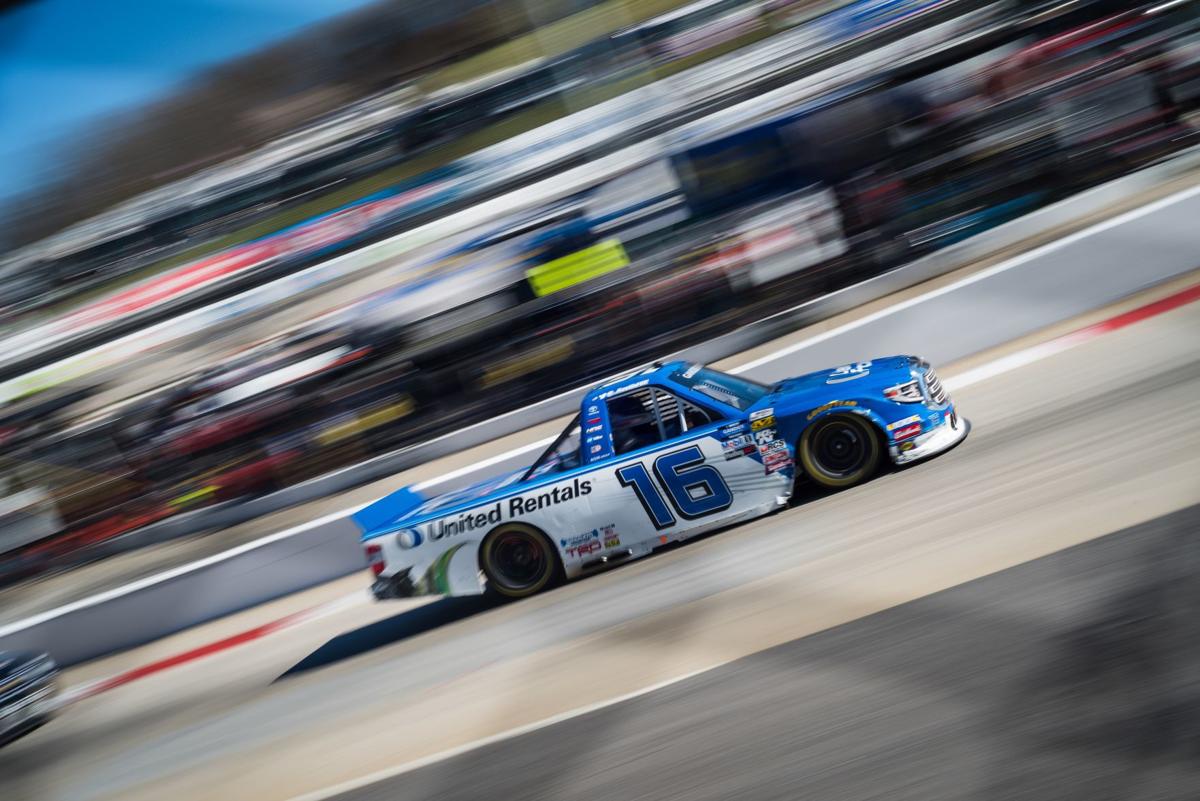 Austin Hill during the TrüNorth Global 250 at Martinsville Speedway on March 23. 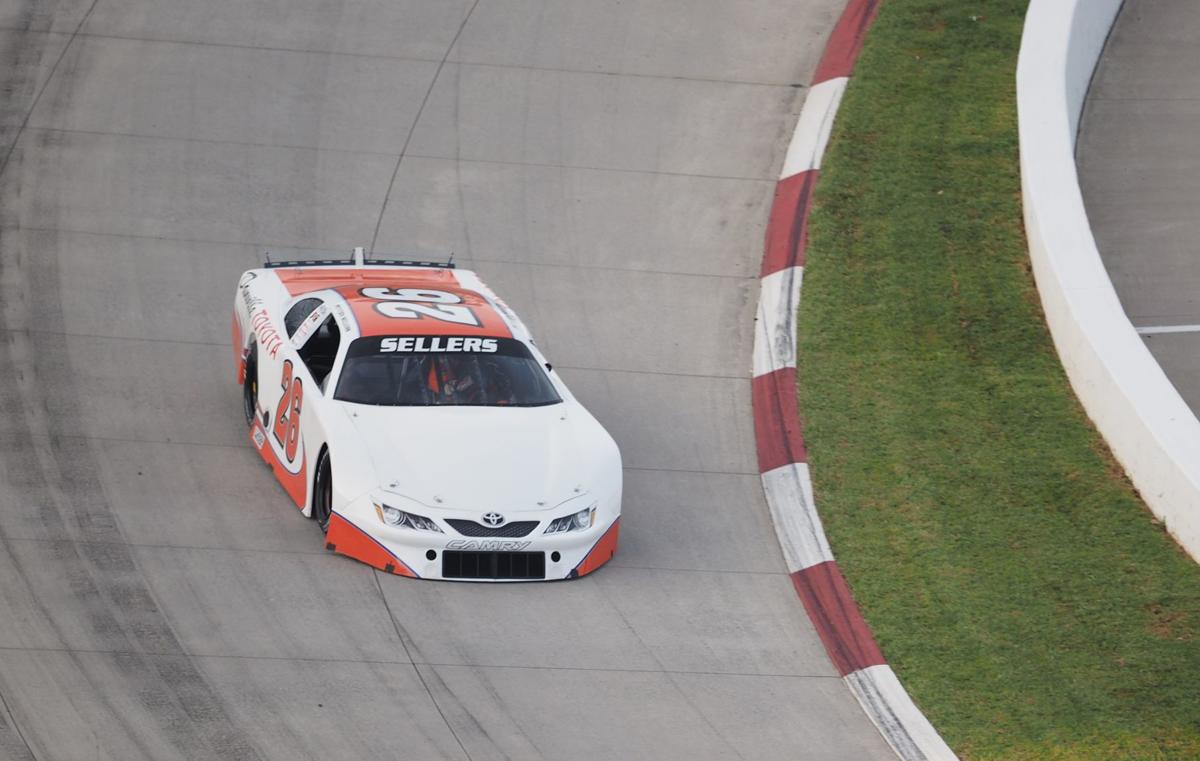 Late model racer Peyton Sellers navigates his Toyota Camry around Turn 1 during a practice session for the ValleyStar Credit Union 300 at Martinsville Speedway earlier this month.

Austin Hill during the Buckle Up In Your Truck 225 at Kentucky Motor Speedway on July 11 in Sparta, Kentucky.

Austin Hill during the TrüNorth Global 250 at Martinsville Speedway on March 23.

Late model racer Peyton Sellers navigates his Toyota Camry around Turn 1 during a practice session for the ValleyStar Credit Union 300 at Martinsville Speedway earlier this month.

Turn on the television and there’s Peyton Sellers setting up a tent in the Danville Toyota parking lot a week in advance of a Black Friday sale.

Next, he’s reading to elementary school children about an optional moonroof on a new Corolla model.

Then he’s in a deer blind, scaring away the targets while explaining how a powertrain warranty works.

Sellers doesn’t fancy himself as much of an actor, but he estimates that he’s made 20-25 of these charming and funny 30-second TV commercials as part of his sponsorship agreement with Danville Toyota.

As a late model race car driver, partnerships like these are crucial for Sellers to continue to race his orange and white 2019 Toyota Camry.

In addition to Danville Toyota, Sellers also has a long-running relationship with Clarence’s Steakhouse in Ridgeway.

“Racing is a big part of our community,” said Allen Pickural, son of Clarence Pickural, the restaurant’s owner. “It’s a conversation piece. Everybody always wants to know how we did or how we’re doing. Bottom line, it’s the advertisement and the publicity, and (Sellers is) an excellent PR guy.”

These local partnerships are vital for drivers at all levels to keep their racing dreams alive. They are also necessary for the future of their sport as a whole.

“It’s a domino effect. If we can’t be there, there’s no show for the fans to come watch,” said Mark Wertz, a late model racer based in Hampton. “Then there’s no reason for a race track, and then you slowly kill the whole sport.”

Wertz, an accomplished racer with more than 30 years of experience, has seen the landscape of sponsorship shift over time.

“The local, small-town companies that used to get into advertising for that local short track have pretty much been choked out of existence,” Wertz said, “and now the big companies are in, so we’ve had to change our approach to how we go after sponsorships.”

Wertz races throughout Virginia and the Carolinas and receives a portion of the advertising budget set aside by local Dunkin Donuts franchisees in those locations. In exchange, he puts the company’s logo on his No. 55 Chevrolet and he makes sure that his fans interact with the Dunkin brand through social media.

“You have to become an ambassador for that company,” he said. “It has to become a partnership. It can’t just be one-sided.”

When driving in the lower levels and as a teenager, NASCAR Whelen Southern Modified Tour driver Andy Seuss agreed to show his car and sign autographs at amusement parks across his home state of New Hampshire—anything to help drum up more interest in sponsorship.

Back then and still true today, Seuss said not all sponsors request to have their name on the car. Rather, they ask for help entertaining guests.

“For people that have never been to a race track, simply listening to the headset is a big deal,” he said. “Same for standing on top of the trailer or being inside the trailer. It’s all important and about keeping people interested in our sport.”

Seuss started in go-karts, but he now also runs and races for an ARCA team for Our Motorsports. For Seuss, finding and appeasing sponsors has become something of a family affair.

Bobbi Seuss, Andy’s mother, sometimes spends at least a month nurturing sponsorship leads for her son. She once landed a sponsorship with a Manchester, N.H., urologist office that paid to have a sticker on the back of the car that read: “Protect Your Family Jewels.”

Shelly Seuss, Andy’s younger sister, estimates that she spends at least 20 hours every non-race week managing Andy’s social media accounts and merchandise orders on top of running her own hair salon in the Mooresville, N.C., area. Andy and his sponsors prioritize fan engagement, so Shelly strives to ensure her brother has a strong social media presence.

“I don’t think anybody ever doesn’t need (the help), to be honest, especially in today’s world,” Shelly said of her role in her brother’s racing career. “You have all these series, and right now everybody is fighting for sponsorships because at the end of the day, that sponsorship is what continues the sport. Everybody could take all the help they could get.”

Austin Hill, who will be in Saturday’s Gander Outdoors Truck Series NASCAR Hall of Fame 200 at Martinsville Speedway, knows better than most how crucial sponsorships can be to advancing a racing career.

Bryan Hill helped his son secure a sponsorship with United Rentals because he worked with the company so often with his welding and steel construction businesses.

Early in his career, Austin used that money to run about 10 races a year. He usually placed in the mid-teens—a result of equipment he couldn’t really afford to improve.

In 2018 with Young’s Motorsports, Hill had a little more sponsorship money and saw his performance improve slightly with marginally better equipment.

This year, Hill has signed on to drive the No. 16 Toyota Tundra for Hattori Racing Enterprises. With an upgraded sponsorship situation, he has enjoyed the best season of his career.

He’s had three wins and six top-five finishes this year, and he’s currently in the final six spots of the GOTS playoffs.

“The sponsorship fell in line perfectly for us this year,” Hill said. “Moving over to HRE, I’ve done nothing different as a driver. I’m just in that much better of equipment, and I’m able to go show what I can do with this good of equipment.”

Raw talent won’t lead Hill to where he really wants to be, though. He would love to be in the NASCAR Cup Series or Xfinity level. But he may never move up without proper financial backing.

“Some people are just stuck where they’re at,” he said.

A common thread among all racers, regardless of sponsorship status, is that they all approach the process of searching the same way. One must be able to create personal relationships with those from whom they ask for money. And a driver must have realistic expectations when pursuing new backers.

Some sponsors could be good for a few thousand dollars a race or only a few hundred.

“You’ve got to do research going into it and know what the limits are,” Sellers said. “In (some cases), you’re a lot better off getting 10 $200 sponsors than you are (with) one $2,000 sponsor because that way you’re more diverse. It’s a little bit more of a headache to make sure the car looks good and prepared and having to answer to different sponsors, but by the same token, if you lose one, it’s not as detrimental.”

Win on Sunday, buy on Monday: Sponsorship plays increasingly vital role at all levels of racing