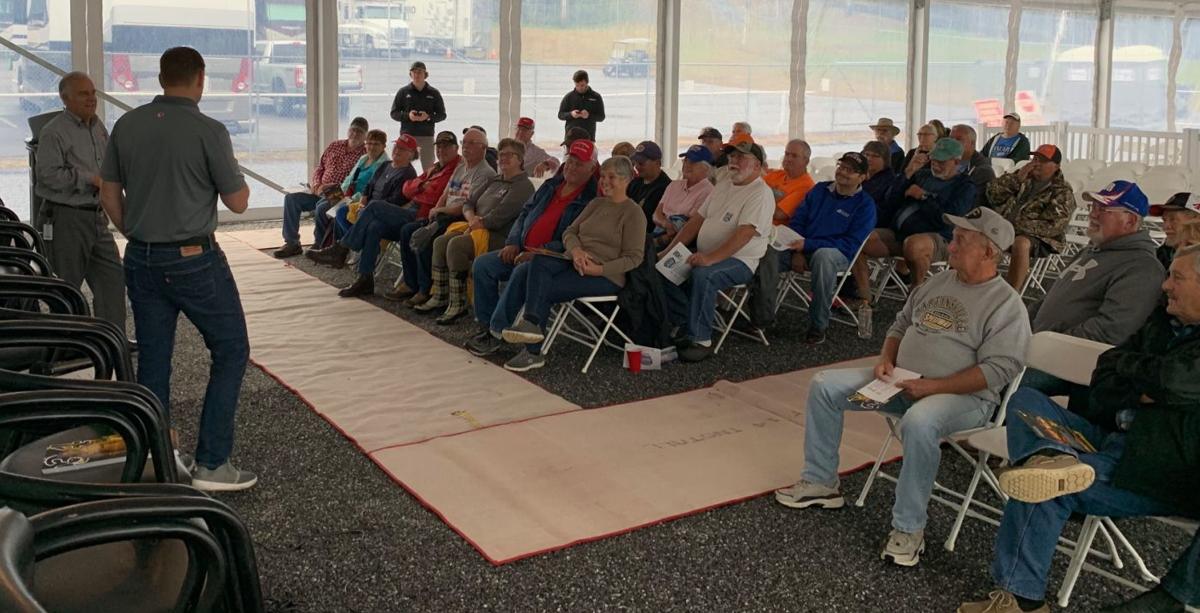 A fan who called herself "Miss Martinsville" rides into the campground at Martinsville Speedway Saturday morning.

A fan who called herself "Miss Martinsville" rides into the campground at Martinsville Speedway Saturday morning.

NASCAR Cup Series driver Michael McDowell had plans to come to Martinsville Speedway on Tuesday for an event with Henry County students, but the weather postponed the event.

McDowell didn’t cancel his trip though. He and Martinsville Speedway President Clay Campbell instead spent the morning with campers who have been at the Speedway all week, talking with them about the upcoming race, answering their questions, and learning more about their intense fandom of the sport of racing.

“They’re extremely loyal and they’re really knowledgeable of the sport,” McDowell said. “So that’s always neat because they’re not just here for the party or the scene, especially at Martinsville and some other grassroots places like that. Darlington, Martinsville, Bristol, a hand full of tracks where we have really passionate fans that come year after year that just love coming and being a part of it. It’s a community thing too. A lot of the campers that we met, they’ve been coming with friends and family or friends that they only see twice a year when the race comes. So it’s fun to see those relationships too.”

“It’s always fun when we get to interact with our fans and Michael did a great job and they had a lot of questions for me too,” Campbell said. “It‘s nice because we see our fans and we realize if it weren’t for them we wouldn’t be here. They’re what make this sport happen. So any chance we get to interact with them and answer their questions and concerns — and some have problems. Some had problems they told me about this morning I wasn’t aware of. So it’s good for me to be able to rectify problems going forward because they tell me what’s going on. We like doing things like that and it was a good turnout. I think the fans enjoyed it. They get here a week early so anything we can do to occupy their time, that’s pretty cool.”

Campbell prides himself on providing a facility that remains fan and family friendly, a philosophy he said goes back to when his grandfather, H. Clay Earles, opened Martinsville Speedway more than 75 years ago.

Earles was adamant on making sure the Speedway always looked pretty, with boxwoods and azaleas around the track’s turns. His belief was if you had a nice facility then parents would feel comfortable bringing the whole family.

“That’s just been our philosophy for a number of years,” Campbell said, “and I think we’ve done a pretty good job of it. We’re always looking at ways to improve that and I’m sure we will going forward.”

Martinsville Speedway is joining in a NASCAR-wide initiative to continue to make tracks family friendly and attempt to attract more young race fans. The Speedway introduced new youth prices for this weekend, including free tickets for Saturday’s NASCAR Truck Series race for those 17 and younger, and youth prices for the NASCAR Cup Series race with no limitations on where to sit.

“That’s our fan of tomorrow so anything we can do to get them interested in the sport now is in our best interest,” Campbell said.

And who knows, maybe those young fans going to races now will become the hardcore campers of the future.

“That’s what’s so crazy about our sport. We have such loyal fans,” McDowell said. “It’s Tuesday. There’s not anything on track until Friday and they’re already here set up and ready to go.”

“They were from all over. And they said they look forward to coming here and they get to revisit with old friends that they’ve made here,” Campbell said. “It’s kind of like a family reunion and they spend their time up there rekindling friendships … So that just shows you that people come from all over and they enjoy what we have to offer her at the Speedway. And not only here but in Martinsville and Henry County.”