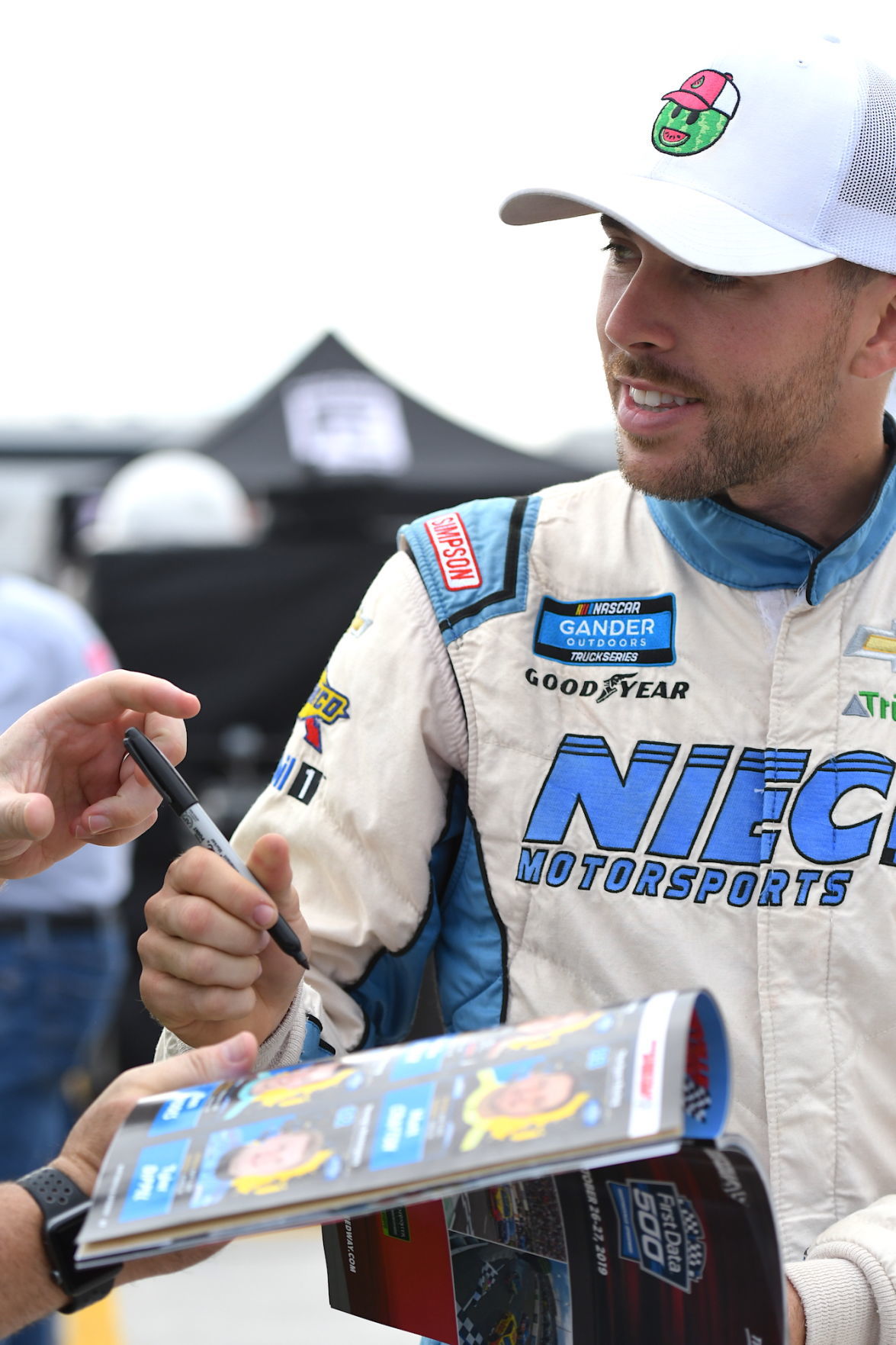 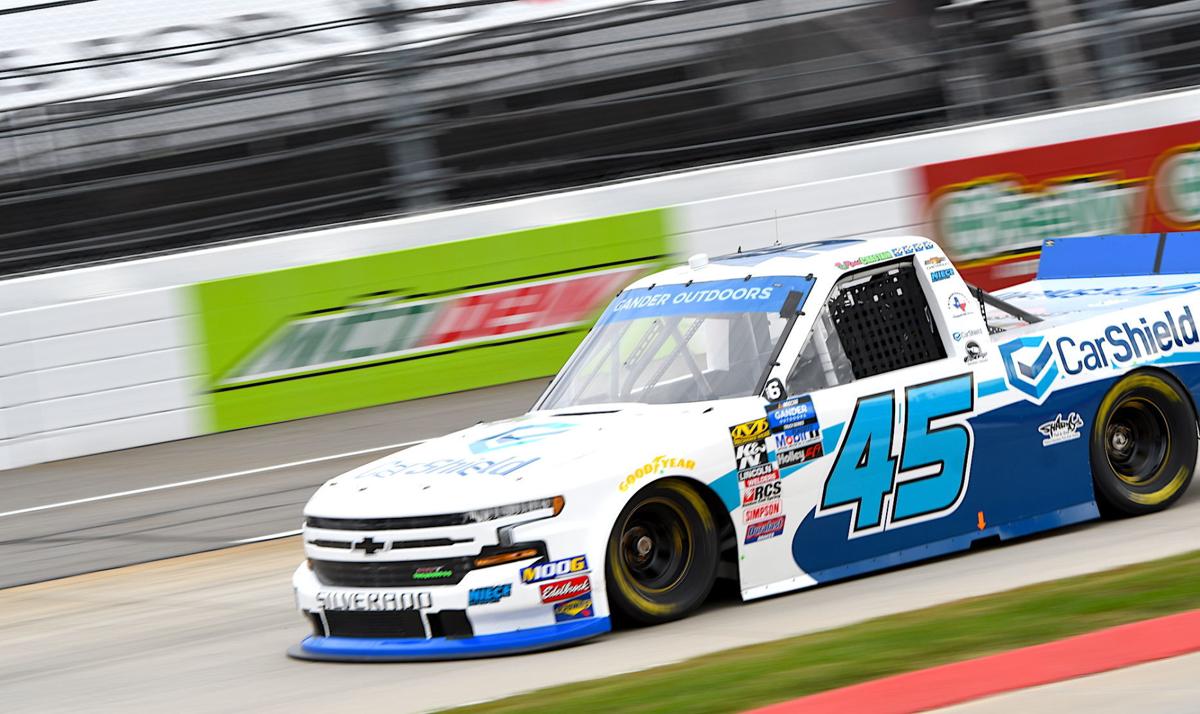 Ross Chastain pilots his No. 45 Chevy Silverado during a practice round on Friday at Martinsville Speedway.

Ross Chastain pilots his No. 45 Chevy Silverado during a practice round on Friday at Martinsville Speedway.

Somewhere deep down in the NASCAR rule book is the clause that turned Ross Chastain’s season around.

Colloquially, Chastain is referred to as “The Busiest Driver in NASCAR,” and for good reason.

In 2019, he committed to running full seasons across each of NASCAR’s three tiers—the Monster Energy Cup Series, Xfinity Series and Gander Outdoors Truck Series—all for the sake of improving as a driver.

“I just want to get better. That’s the honest truth,” he said Friday in anticipation of the NASCAR Hall of Fame 200 and First Data 500 at Martinsville Speedway this weekend. “Laps on these race tracks, on the weekend that you’re racing in real race cars, it’s the absolute best thing you can do.”

Chastain started this season earning points in the Xfinity Series, but midway through the year he learned that sponsorship was running thin for his cars in that tier—the No. 4 for Johnny Davis Motorsports and the No. 10 for Kaulig Racing.

He was faced with a decision: Finish what he started in Xfinity and run those races, or forgo those points and declare instead for points in the truck series with Niece Motorsports, where he could be more competitive.

“It gives you a shot with a company that can go win a championship,” he said. “I’ve got to take it.”

Chastain received mixed reviews about his decision, but from a racing standpoint, it appears as though he’s made a smart move.

Entering Saturday’s race, Chastain had posted eight finishes in the top 10 since declaring points in the truck series. He’s also won twice — at Gateway and Pocono Raceways — not including a win he had rescinded at Iowa because of a technical penalty.

Overall this year, in his No. 45 Chevy Silverado, Chastain has three wins and 16 top-10 finishes, making him not only the busiest driver, but also one of the most consistent.

He came into Saturday’s NASCAR Hall of Fame 200 as one of the final six members of the Gander Outdoors Truck Series playoffs and with his eyes set on hopefully being in the last four at Homestead on Nov. 15.

Of course, Chastain also plans on racing in the Cup Series at Texas and Phoenix before then.

In order to keep his body in racing shape, Chastain keeps a fairly rigorous but regular workout schedule.

“I do things that are specific to the race cars—a lot of heat training, a lot of cardio,” he said. “I just try to adapt to what I need to be the best at. It’s not big muscles, it’s not strength. It’s key items and key muscles.”

In addition to a lot of time on a road bike to fulfill his cardio requirements, Chastain said he works to strengthen his right leg and left shoulder. Because the brakes in his vehicles require so much more force, his left braking leg is much stronger. And because he makes almost exclusively left turns, his right turning shoulder is taxed much more frequently.

On weekends with multiple races, Chastain relies on watermelon to stay hydrated—a trick he undoubtedly picked up as a kid growing up in a family of watermelon growers in Alva, Fla. The rotund fruits are 92 percent water, helping him replenish what his body loses through sweat.

On a farm that produced 400 acres of watermelon, Chastain and his family got to know people in all corners of the watermelon industry. They became some of his earliest sponsors, and the watermelon growers of a handful of states remain as backers today.

“The industry as a whole kind of supported me,” he said.

His agricultural background doesn’t end there, though. After Martinsville, Chastain isn’t traveling with his team to Texas for the next race. He’ll instead fly to Indianapolis for the yearly Future Farmers of America convention.

“I’m just getting into it. This will be my first trip to their annual conference,” he said. “They didn’t have it in our area when I was growing up. I did 4-H and showed cows, but I’m going to learn a lot about it on Wednesday.”

Then he’ll fly to Texas on Thursday, down some watermelon and race in the AAA Texas 500 on Saturday.

The title of The Busiest Driver in NASCAR is safe for another day.