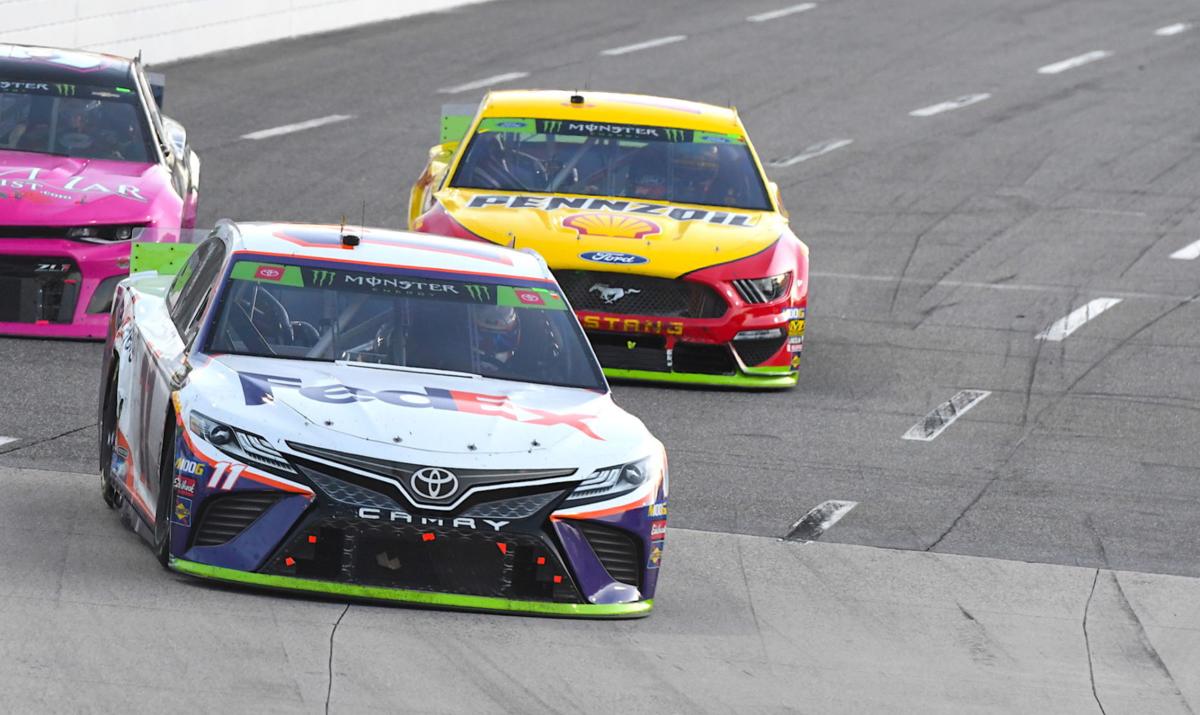 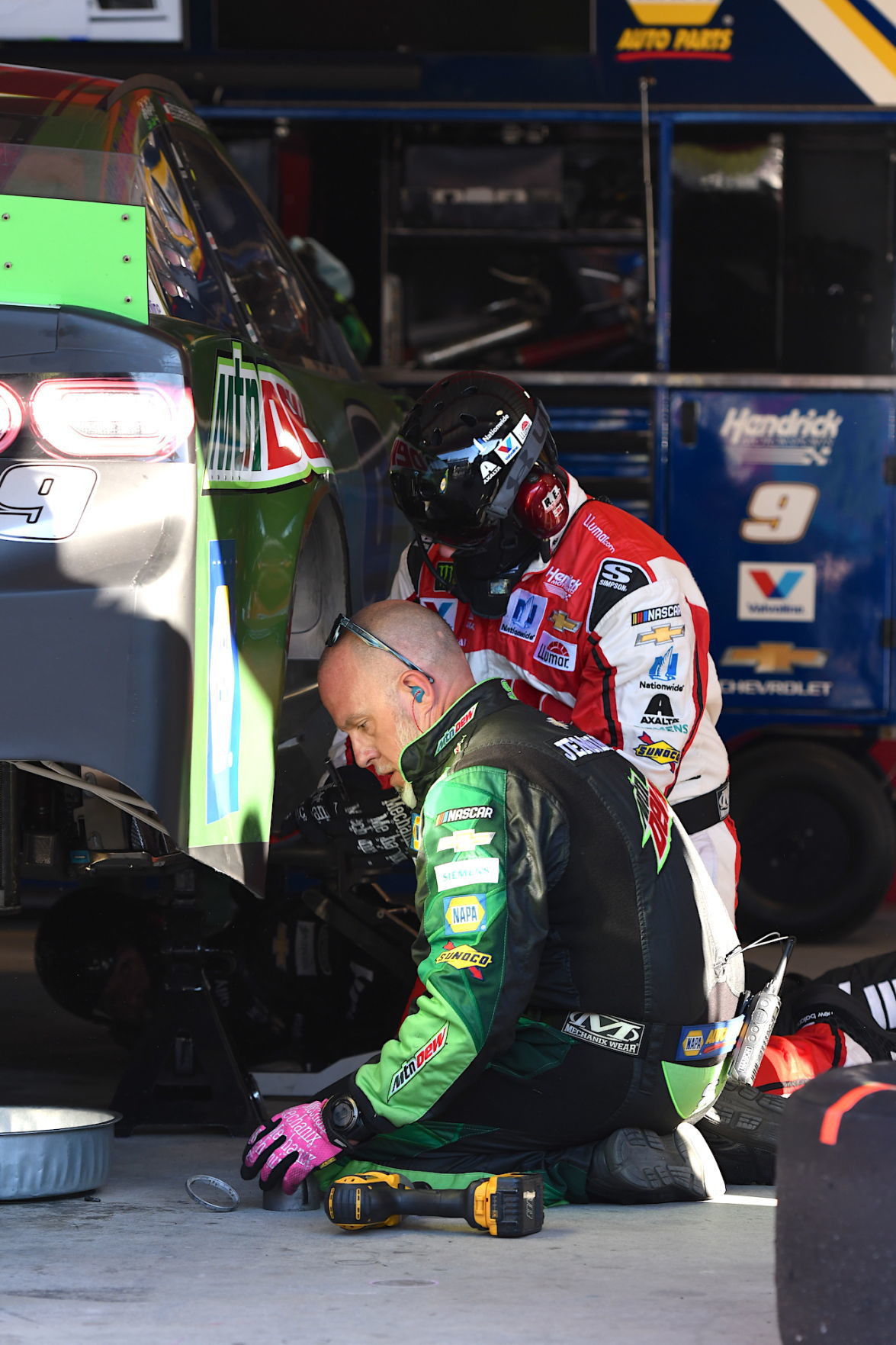 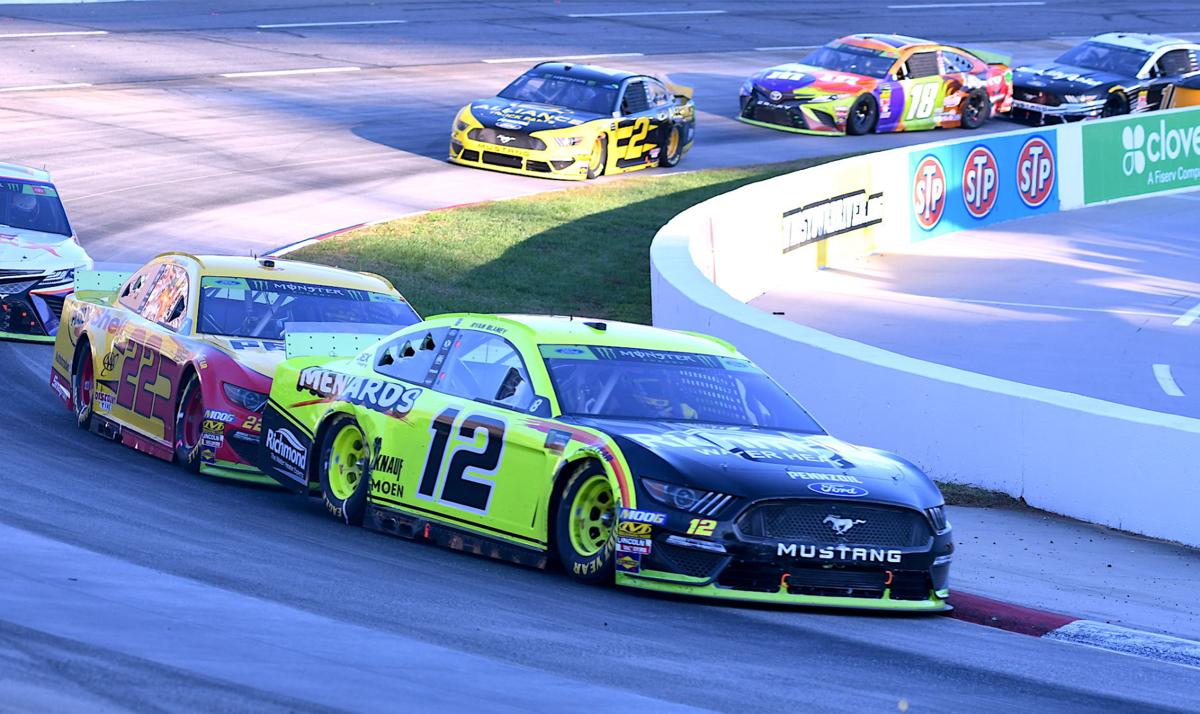 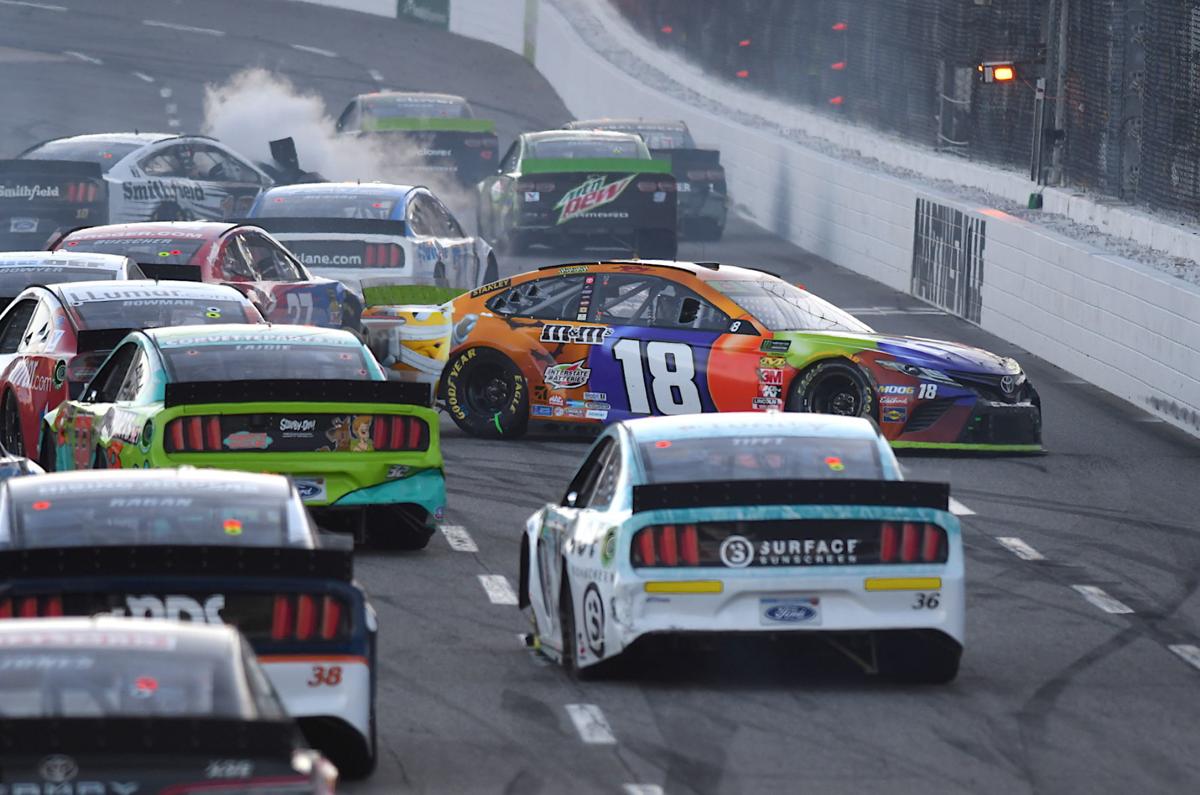 Kyle Busch (18) spins out on the front stretch on Lap 363 during Sunday's First Data 500 at Martinsville Speedway.

Kyle Busch (18) spins out on the front stretch on Lap 363 during Sunday's First Data 500 at Martinsville Speedway.

Once it became clear that Martin Truex Jr. would not be caught, the rest of his playoff competition got a little desperate for positioning.

As Truex Jr. racked up 464 laps led at the NASCAR Cup Series First Data 500 on Sunday at Martinsville Speedway, his Joe Gibbs Racing teammate Denny Hamlin drew the ire of Team Penske’s Joey Logano on Lap 460. Hamlin's No. 11 Toyota made brief contact with Logano’s No. 22 Ford while jockeying for space in the top five, but Logano ended up hitting the wall at Turn 4 and blowing his left rear tire.

Logano confronted Hamlin on pit road immediately after the race’s finish—lightly jabbing him in the shoulder and retreating once he had made his point. Hamlin, upset at the gesture, briefly gave chase but had to be restrained by members of his crew and NASCAR officials.

The play-by-play of the altercation varies depending on the source.

“I was frustrated by the situation, obviously. I really wanted to go over there to talk to him and get his side of the story on what happened,” Logano said. “He wasn’t as apologetic as I was looking for, and that probably escalated the situation too much. I shouldn’t have shoved him. ... But I was frustrated, tempers are high and it’s the playoffs.”

Hamlin believed that the conversation was civil before Logano pushed his right shoulder and turned away.

“It was a discussion. I understand coming over and talking, and I was there having a discussion with him and everything was fine,” Hamlin said. “I think he didn’t get me agitated enough so he says something then pokes a little bit and runs away so he can hide behind his guys. He’s just not that tough. He won’t see you face-to-face.”

Logano, running fourth at the time of the contact, dropped out of the top 10 but eventually recovered to place eighth. Hamlin, meanwhile, placed fourth.

Given the juncture of the race, Logano was displeased with Hamlin’s tactic to get ahead.

“I don’t think it was necessary. There were plenty of laps to go,” Logano said. “If you’re racing for the win and come off the last corner, all right, I get it, but I just don’t understand the situation (there).”

Hamlin, predictably, defended the contact as nothing out of the ordinary.

“The feeling was we got together and he cut a tire, which is very unfortunate for him, but it was not malicious by any means,” Hamlin said. “It just happened. I tried to get tight, I got tight off the corner, we made contact. It was unfortunate, but when you’re in tight confines, there’s going to be some contact here and there.”

When the dust settled, Hamlin finished the evening sitting second in the playoff points race—20 points behind Truex Jr., seven ahead of Kyle Busch and 10 ahead of Logano.

While Truex Jr. celebrated his seventh win of the season, team owner Joe Gibbs was peppered with questions about Hamlin’s actions.

“There’s always so much at stake here,” Gibbs said. “I’m not sure of everything that happened. I’ll leave that up to the drivers. Martinsville tends to bring that out—two guys going after it and had a lot of passion. One of those things that can happen in our sport.”

Much earlier in the day, Hamlin benefited from his pole position and led the race’s first 30 laps. Truex Jr. overtook him on Lap 31 en route to a Stage 1 victory.

Chase Elliott, though, had the most disappointing weekend.

He first suffered a blown engine during Saturday’s practice round, which required a replacement and a subsequent penalty to start at the back of the field on Sunday. Then, on Lap 183, he broke an axle during a pit stop and he never recovered.

“Just disappointing for a day like that,” he said. “We know better, and we can do better that that.”

Elliott had methodically worked his way up through the race, reaching 19th by the 25th lap and ending the first stage in eighth place. He was running fifth at the time of the axle trouble.

Once it was repaired, he rejoined the race more than 50 laps behind the leaders. With Sunday’s result, he now faces must-win situations at Texas and Phoenix in order to be part of the final four at Homestead-Miami Speedway.

He sits eighth in the playoff points, 44 points behind Logano in fourth.

Busch started 13th and eventually made his way as high as fifth. His race was derailed, however, when he got turned around after taking a nudge from Aric Almirola on Lap 363. Busch ended up back in the mid-teens, while Almirola’s day was done after sustaining heavy damage.

The wreck also dinged up Jimmie Johnson, Ryan Preece and Matt DiBenedetto’s vehicles, but only Johnson was forced to exit. Busch ended up taking 14th.

Larson led laps 254-259 before ceding the lead back to Truex Jr. right before Stage 2 ended. Truex Jr. led the rest of the way with little trouble.

“This is my second-best finish at Martinsville, so I’m happy with that,” Larson said. “We were able to steal some stage points as well, so we probably over-achieved for how we usually run at Martinsville.”

At the finish line, though, it was Truex Jr. smiling the most.

“We adjusted early on and it came to life, and that was a lot of fun,” Truex Jr. said. “I’m just proud of everybody giving me a race car like that and being able to put it all together today when it counted.”

Relive the First Data 500 at Martinsville in words and images

Did you watch the First Data 500 at the Martinsville Speedway on Sunday? Were you there? Martin Truex Jr. certainly was. Here is the day in wo…