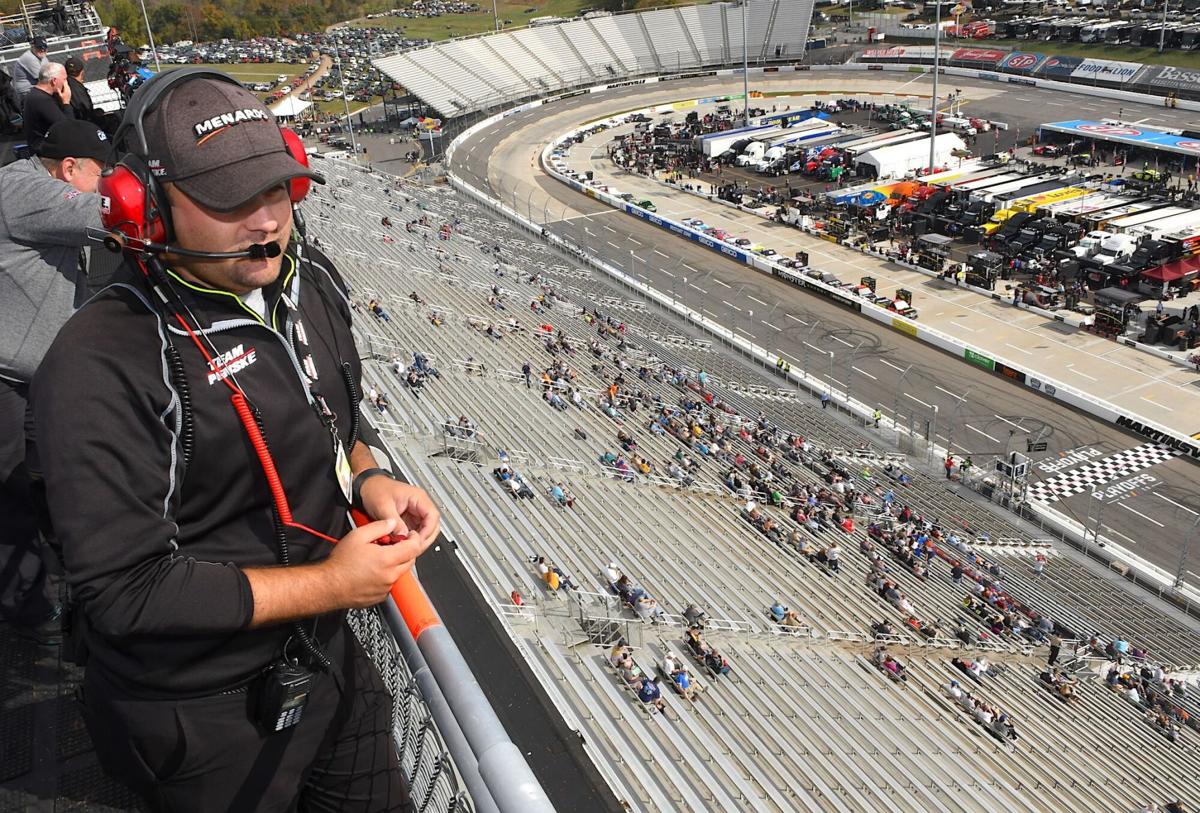 Josh Williams, spotter for the No. 12 car of Ryan Blaney, prepares for NASCAR Cup Series practice on the roof at Martinsville Speedway Saturday. 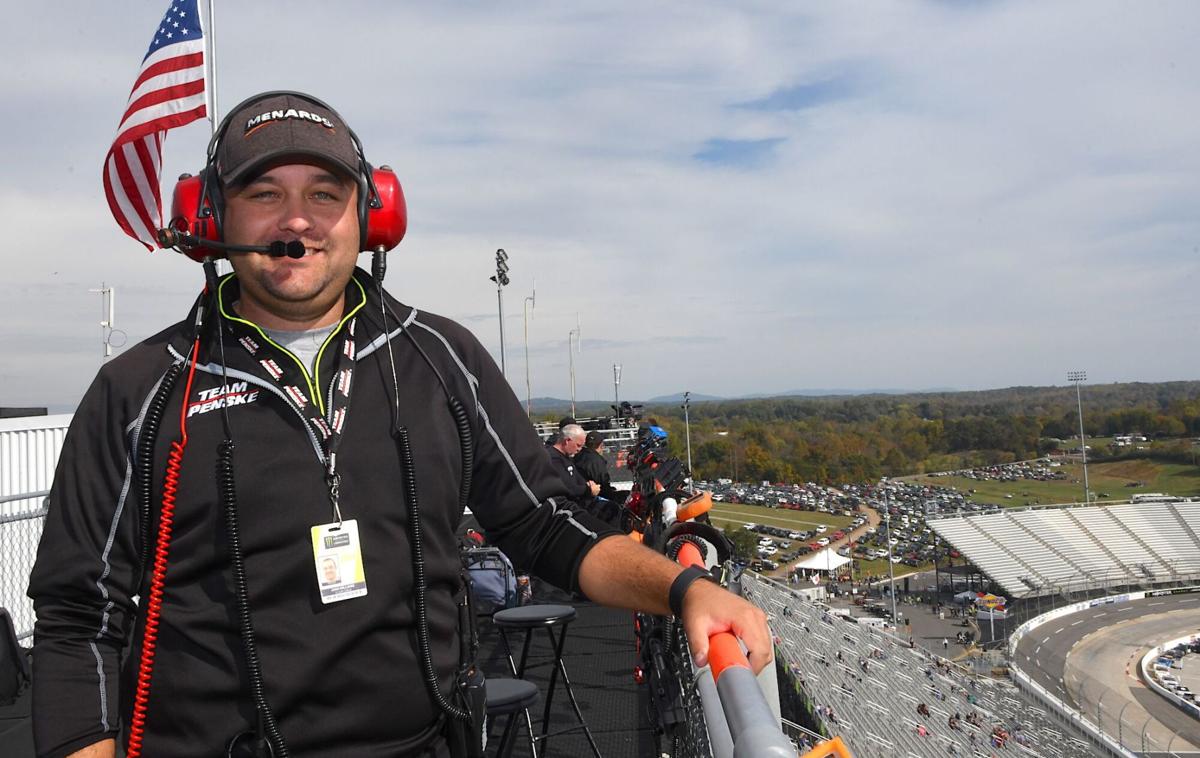 Josh Williams, spotter for the No. 12 car of Ryan Blaney, prepares for NASCAR Cup Series practice on the roof at Martinsville Speedway Saturday.

A typical week for Josh Williams, spotter for the No. 12 car of Ryan Blaney, begins on Monday with a debrief meeting of the previous day's race, going over what the team could have communicated better, what went well, and what went wrong.

At the end of the week, before the team leaves for the next race, they'll have another meeting to go over practice and prerace plans for the weekend. The goal is to make sure Williams, Blaney, crew chief Jeremy Bullins, and the rest of the team are all on the same page.

“It's real helpful because it's nice to go into the week already being prepared for it,” Williams said.

Williams wants to make sure he's extra prepared for Sunday's race at Martinsville Speedway, because a win means not only does he get to celebrate with his team, but also with his family and friends.

Williams is a Magna Vista graduate who grew up in Ridgeway. Martinsville Speedway was his first taste of NASCAR racing.

“When I think of racing that's what I think of,” he said.

On Martinsville weekends, Williams typically comes up a day early to see his family. He said when he's not at the track he's with family, and when he is at the track he gets a chance to see old friends too.

“It's busy but it's really nice to catch up with people,” he said.

This fall's Martinsville race will be a bit more special for Williams and the No. 12 team, because for just the second time since he's been working with Blaney the team is still in the playoffs when they come to Williams's home track.

Blaney's team reached the round of 8 after a win a Talladega Superspeedway two weeks ago. It was Blaney's first win of the season, and third of his career.

“Talladega was really big,” Williams said. “We've had a lot of close calls this year and a few races we probably should have won, and then we get to the playoffs and had some bad luck there in Dover. So it was pretty much we needed a win racing at Talladega there, so to pull that off was really nice for our whole team. Especially, we needed a win at this point in the playoffs, but also being this close all year and finally getting it done, I feel like it was a really big confidence booster for all of us to get us through the last four weeks of the season here.”

The win at Talladega meant the team already knew its playoff fate before last week's race at Kansas Speedway. That helped take a bit of the pressure off as they chase a championship.

Blaney started third and led two laps at Kansas, but ultimately finished 21st after getting into the wall with less than 20 laps to go.

“You always still want to keep the momentum you've built up through Talladega and the races prior,” Williams said. “You want to keep that momentum up. We had a really good run going at Kansas. We brushed a wall there with 15 laps to go or so, but I feel like it was still a momentum booster with how we ran. You don't want to go in there not caring how you run and let your guard down, but it was nice that we did run good. Even though we didn't have the finish to support it, it was good to keep that momentum going with how we ran.”

Martinsville is a tough racetrack for drivers, but it's just as tough for spotters trying to lead those drivers and keep them out of harm's way on the track. Given how many times Williams saw a race at The Paperclip growing up, he said it's a place he feels comfortable in his job, but there's still always that element of surprise.

“Things just happen so quick and it's so narrow,” he said. “You can be on one end of the track and they wreck on the other end and you're there before you know it. So from a spotter's standpoint everything is quick and close together and you don't always have total control of every situation just because everything is so close like that.

“So the hardest part for me is just everything being so close and the restarts... it's easy to get caught up in somebody else's mess on restarts.”

Blaney himself has said that Martinsville is a place where he hasn't felt too comfortable in the past, but his finishes have shown otherwise. He has two top-5s and another top-10 in his last four trips to The Paperclip. He led 145 laps of the 2018 spring race, and finished fourth earlier this year.

He hasn't won at Martinsville yet, though. A win this week would allow the team to automatically get into the final four and qualify for the championship race at Homestead-Miami.

Williams is already thinking about what it would mean to break through and get to victory lane on Sunday.

“I was having a conversation this morning about how big it would be to win at Martinsville, especially now having a chance to go to Homestead,” Williams said. “Winning at Martinsville would take care of a lot of things, so it would be really cool to be in front of all the family and winning and to make it to Homestead... it would check a lot of boxes if we could get it done this weekend.”