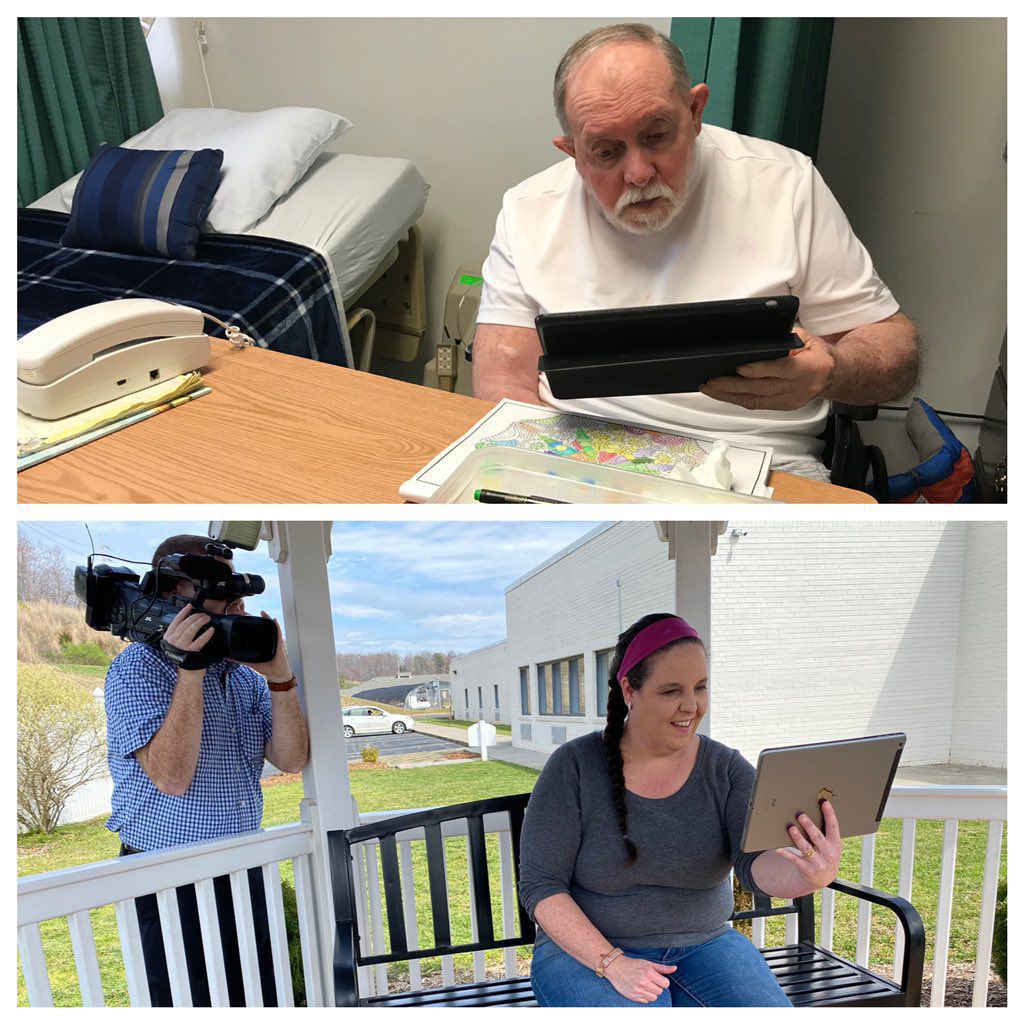 A resident at a Stuart nursing home (top) talks with his family member (bottom) on an iPad donated by Jon Wood and Wood Brothers Racing, which bought more than 200 iPads and tablets to donate to Stuart-area nursing homes so residents could video chat with their loved ones while facilities are closed due to coronavirus concerns. 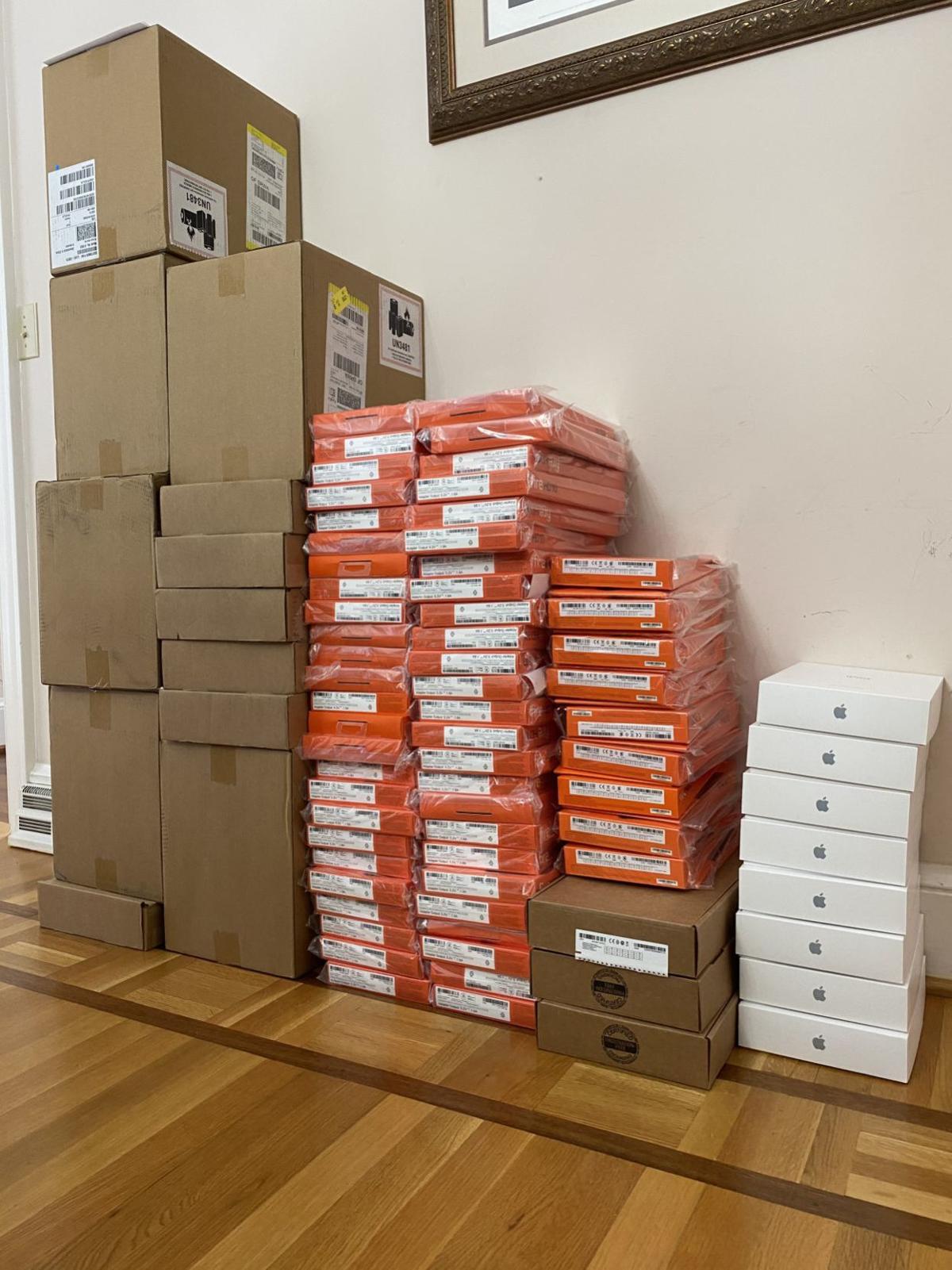 Jon Wood and Wood Brothers Racing bought more than 200 iPads and tablets to donate to Stuart-area nursing homes so residents could video chat with their loved ones while facilities are closed due to coronavirus concerns. 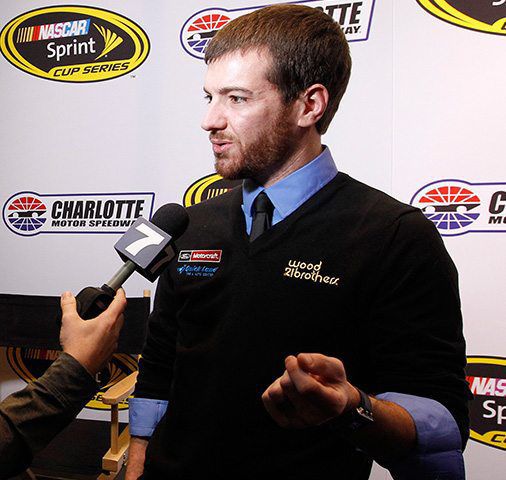 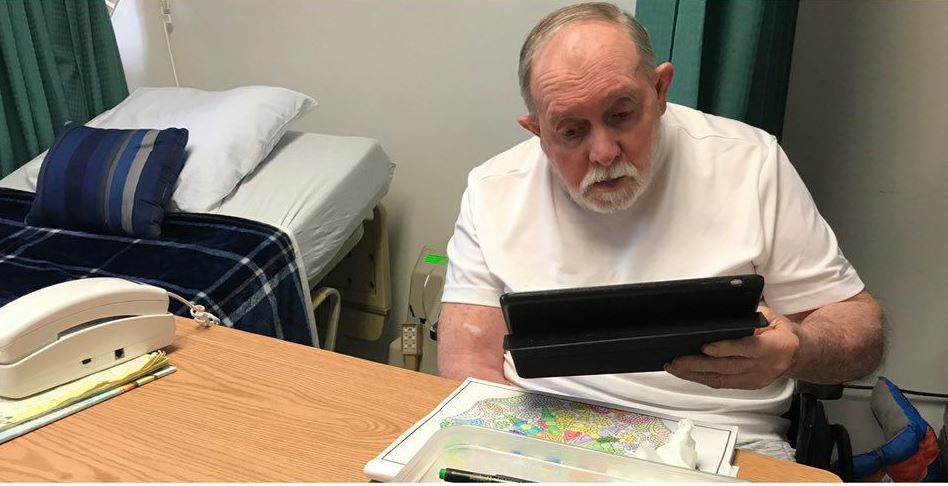 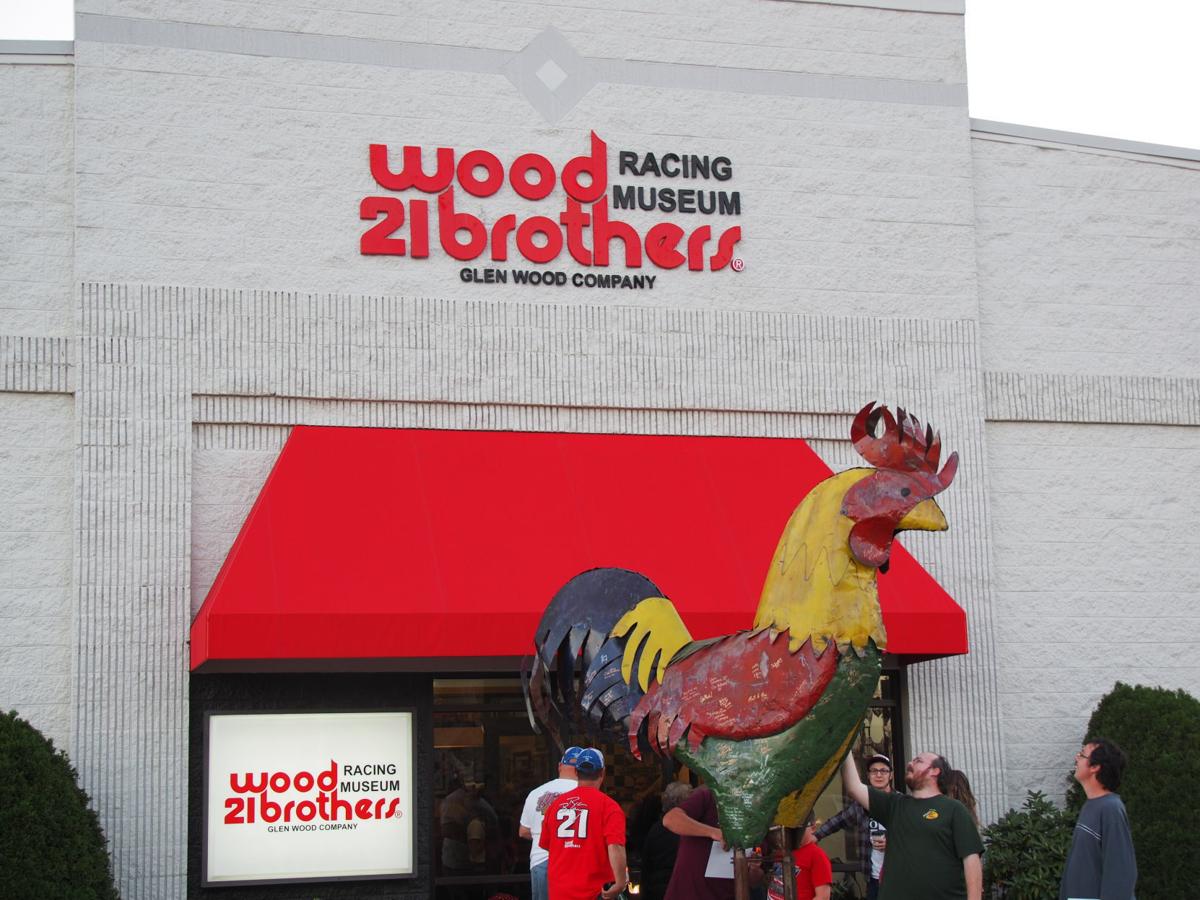 The Wood Brothers, a NASCAR Cup Series team from Stuart, are donating more than 200 tablets to local nursing homes to allow residents to video chat with loved ones during the coronavirus 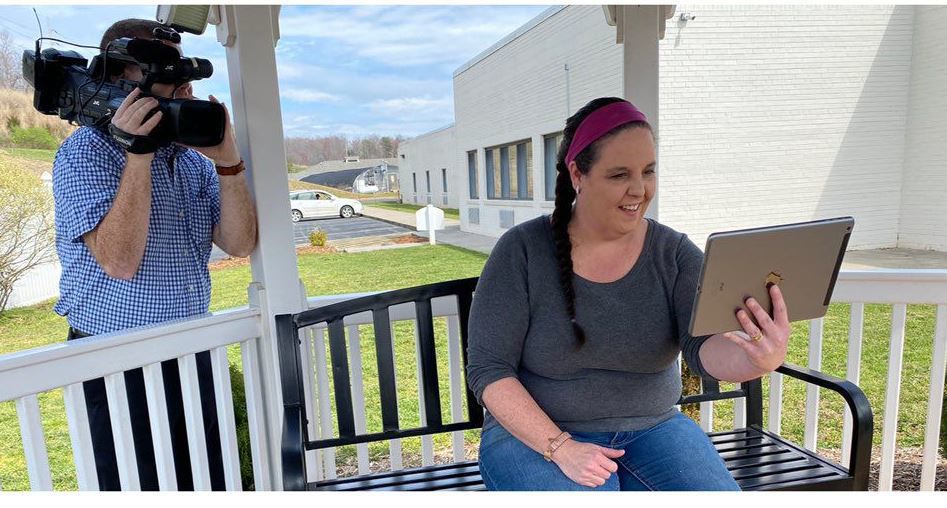 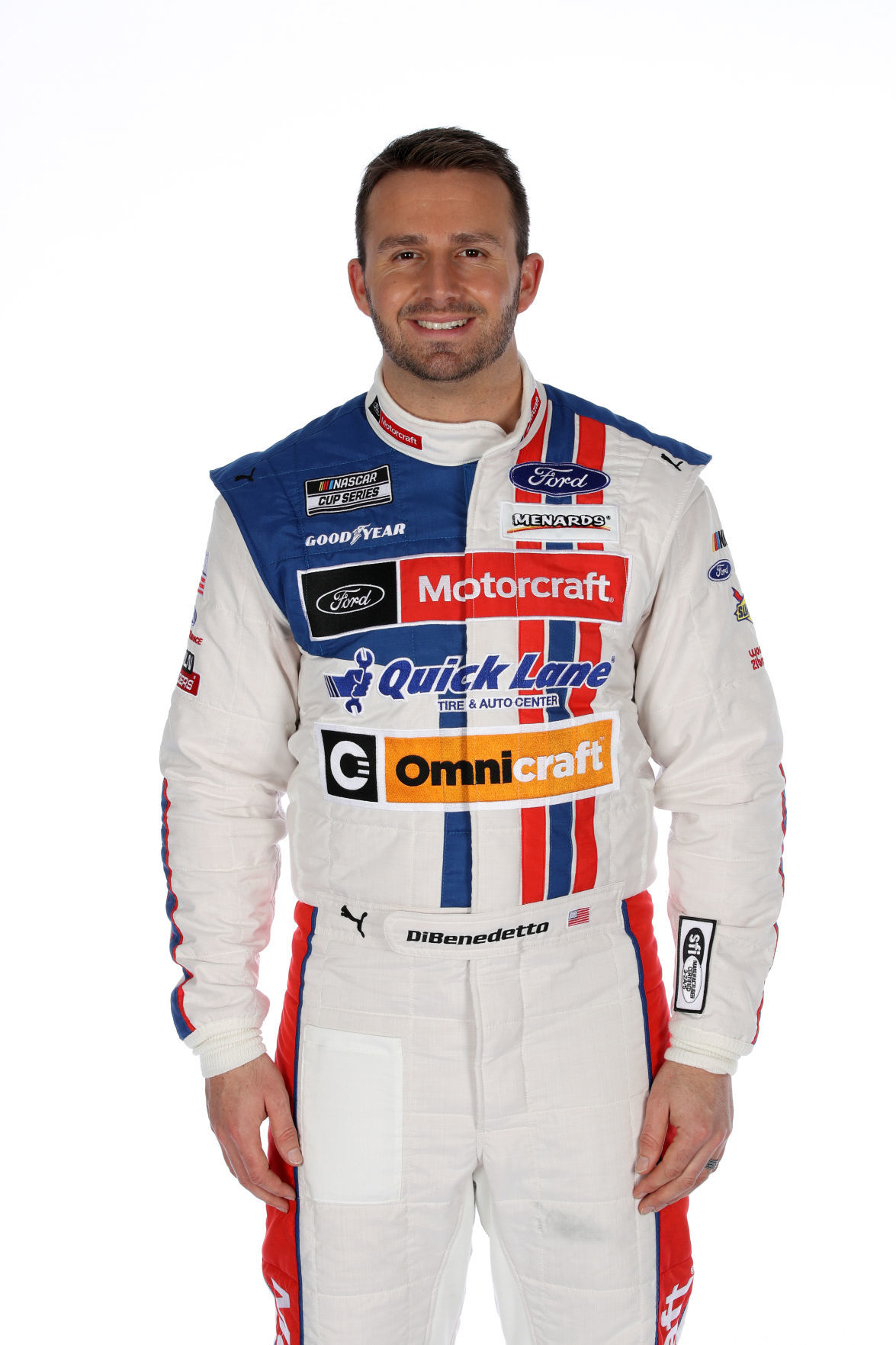 Matt DiBenedetto is the driver for Stuart's Wood Brothers Racing.

A resident at a Stuart nursing home (top) talks with his family member (bottom) on an iPad donated by Jon Wood and Wood Brothers Racing, which bought more than 200 iPads and tablets to donate to Stuart-area nursing homes so residents could video chat with their loved ones while facilities are closed due to coronavirus concerns.

Jon Wood and Wood Brothers Racing bought more than 200 iPads and tablets to donate to Stuart-area nursing homes so residents could video chat with their loved ones while facilities are closed due to coronavirus concerns.

The Wood Brothers, a NASCAR Cup Series team from Stuart, are donating more than 200 tablets to local nursing homes to allow residents to video chat with loved ones during the coronavirus

Matt DiBenedetto is the driver for Stuart's Wood Brothers Racing.

The trickle down effects of coronavirus quarantines are numerous and widespread, but Wood Brothers Racing is hoping to help residents of nursing homes in their area with at least one issue they’re facing.

The Wood Brothers, a NASCAR Cup Series team from Stuart, took donations throughout the week on their website to buy iPads to donate to Blue Ridge Therapy Connections and The Landmark Center in Stuart. These tablets would allow residents to video chat with their families while facilities are locked down because of the concerns of the virus.

As of Saturday, Jon Wood, senior vice president and co-owner of the Wood Brothers, said the team raised more than $33,000, enough for 190 tablets so far. When all is said and done, Wood said he plans to have about 220 tablets purchased, thanks to 1,251 individual donations.

“We’ve had everything from standard online store donations, we’ve had people mail checks, cash, call and pay by phone, you name it,” Wood said Saturday.

Wood said he came up with the idea while talking with his mom, Carol Wood, the director of marketing for both of the facilities in Stuart.

They were discussing the new nationwide guidelines that suggest locking down all nursing homes to outside visitors who could bring in the coronavirus and infect their patients, who are in the high-risk categories.

He said the Woods were concerned about what nursing homes would do to keep their residents occupied.

“That’s pretty tragic for these people,” Jon Wood said. “Just one thing leads to another, and I had mentioned if they had a couple of iPads laying around, maybe they could set up video visitation things, and she started asking questions about what do I mean, and we just kind of went from there.

“It wasn’t just something that she just outright said, ‘Hey what do you guys think we can do to help them.’”

Jon Wood posted from the official Wood Brothers Racing Twitter account on Sunday morning that he “got a crazy idea.” Fans could donate $10 on the Wood Brothers Racing website towards buying iPads to be donated to nursing homes so residents could stay connected with their families and loved ones while visitors are restricted.

In return those who donate would receive a signed thank you note from Wood Brothers driver Matt DiBenedetto, team founder Leonard Wood and co-owners Eddie and Len Wood.

“I set the donation amount really low, because in times of crisis people want to hold onto their money, and I can totally relate,” he said. “So it needed to be a low amount that people could easily part with and not think twice about, so it would take a Bernie Sanders campaign type of effort, where it’s a bunch of small donations instead of one big one.”

He said it was important to him to offer autographs and give something back to those who donated, so they could have something tangible and feel a connection to the campaign.

Just how much money people were willing to give, though, was a surprise to him. Wood said they’ve had donations of various amounts, some into the hundreds of dollars.

“It’s a shock at how prevalent and how many other people have a relative that is in a facility right now that are facing these circumstances and there’s really no way around it,” he said.

Wood said he wanted to cap the number of thank you notes from DiBenedetto at 1,000, so as to not burden the team’s driver too much.

Wood said he thought he had taken any possible roadblocks into account before he actually started taking donations. The nursing homes all have WiFi, so they don’t need any additional cellular plans or costs.

The tablets are also easy to transport and can be attached to IV poles, and they’re easy for residents to learn how to use without needing to interact much with others who could spread the virus.

He provided photographs of a visitor using an iPad to talk to a resident inside a facility that is quarantined.

Having iPads will also serve the facilities beyond the coronavirus crisis. Wood said employees and nurses are already trying to figure out apps and programs they can use in the future, and he also has purchased Amazon Fire Tablets on which residents can read books.

“It has purposes and uses beyond just this limited two-month span we think this will last,” he said.

Wood said he had purchased enough tablets for the two facilities in Stuart, so he can move to donating to other sister facilities in the area.

The only hiccup he’s encountered has been with purchasing the tablets on Amazon. The company caps iPad purchases to 10 per person, so Wood said he’s had to figure out ways around the limit by using other people’s accounts.

“Surprisingly it’s a lot a harder to buy these things than you’d like,” he said. “I’ve used my account, the business account, my mom’s, dad’s, wife’s, mother-in-law’s, sister’s, and even my old Spanish teacher had four delivered to her house.”

But despite the minor setback, the Wood Brothers already started delivering this week.

“It wasn’t really this full blown idea from the start. It just kind of evolved and it’s surprisingly working,” he said.

If the Wood Brothers can help a few people get through this tough time, that’s all that matters to them.

“We all have the ability to hop in the car and leave or call somebody and it’s still a difficult time for all of us, but imagine being in a nursing home and not being able to get that reassurance from a family member or just have that face-to-face. We can’t comprehend what that’s got to be like,” Wood said. “We’re going to have a pile of iPads and tablets. As long as we can put them to good use, I see no reason to not give out what we can.”

More in COVID-19/coronavirus daily update from the region, state, nation and world: March 22 (1 of 16)