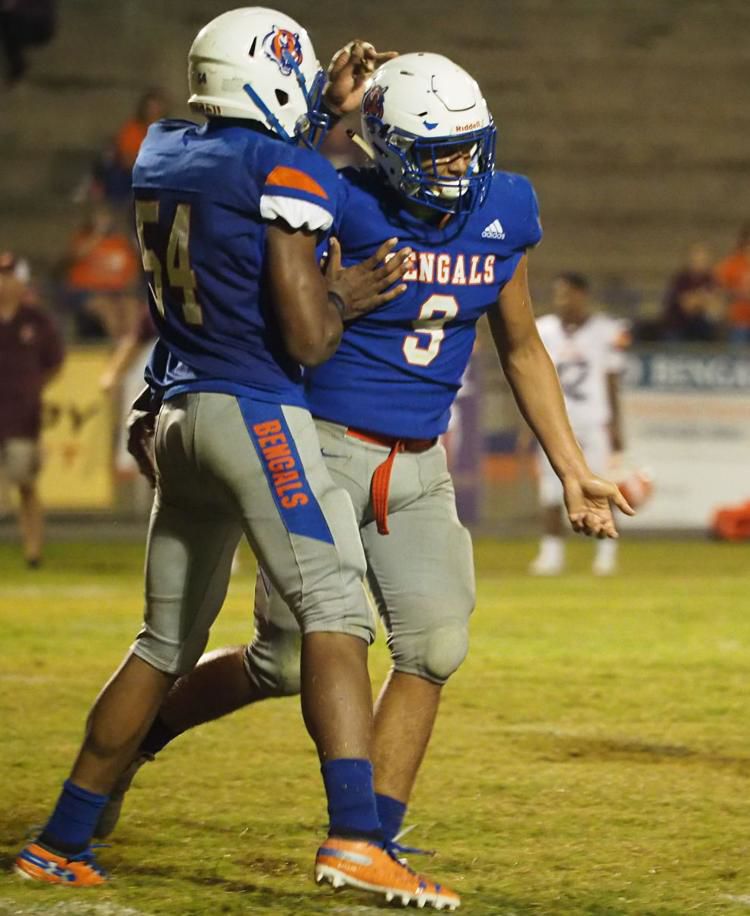 Bassett seniors Dominic Gill (54) and Kevon Smith (9) celebrate a play during a game earlier this season. 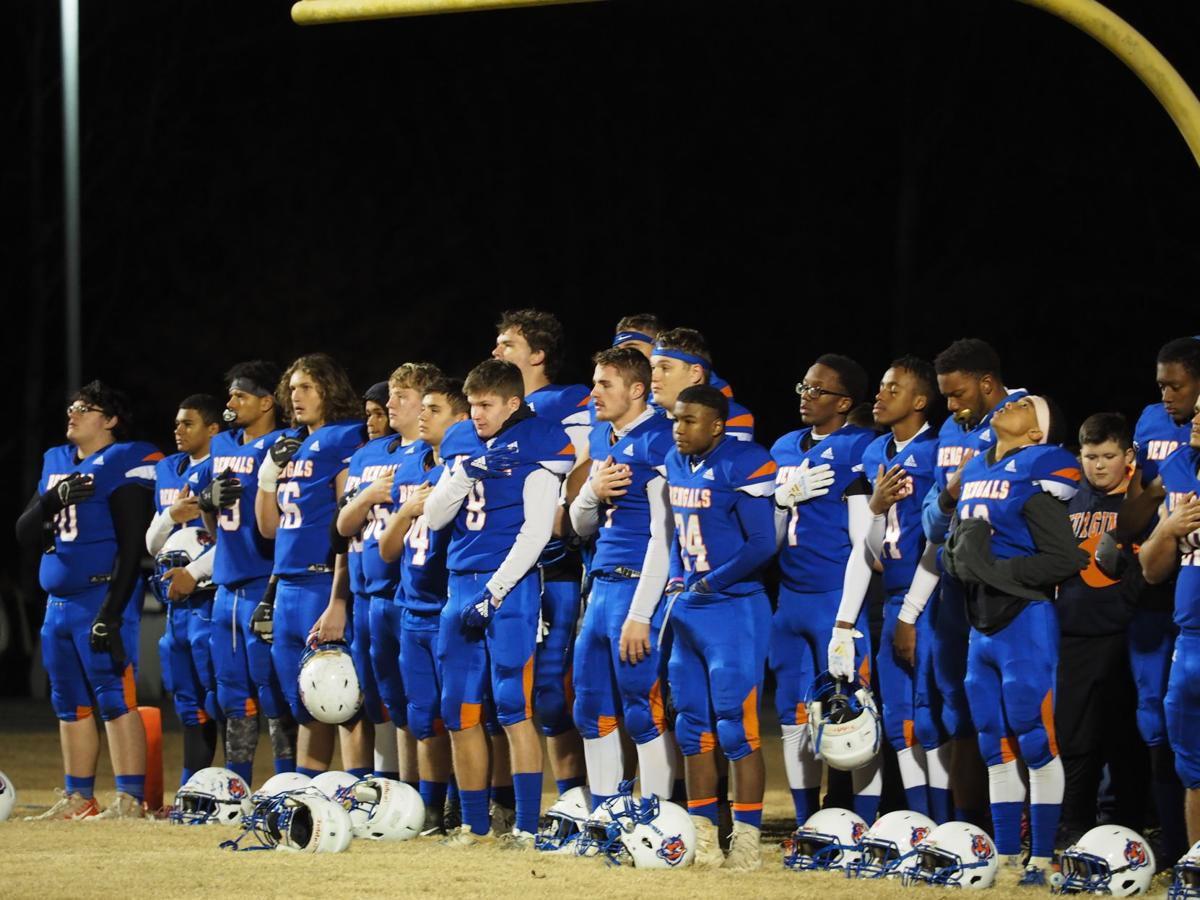 Bassett's football team listens to the national anthem before the start of a recent game. 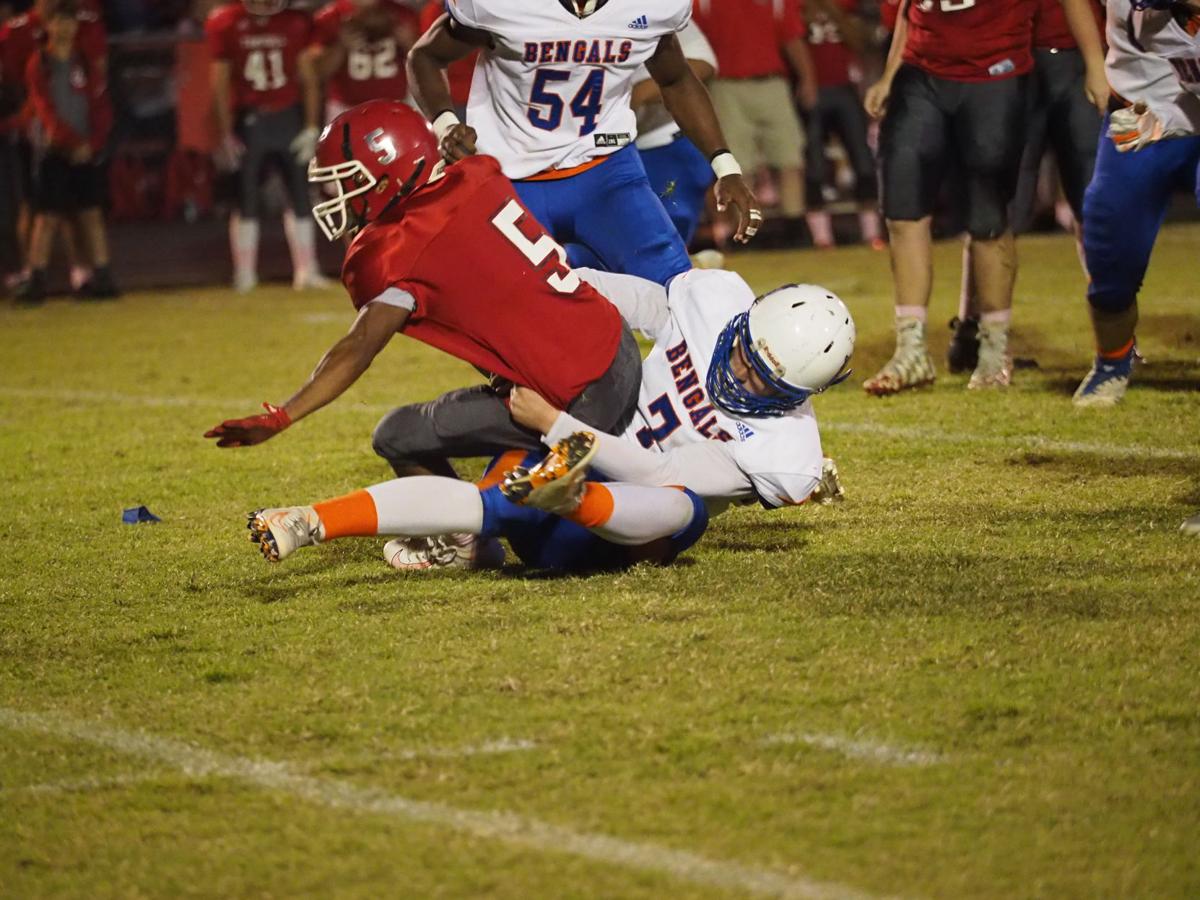 Bassett senior Austin McDaniel makes a sack during a game this season. 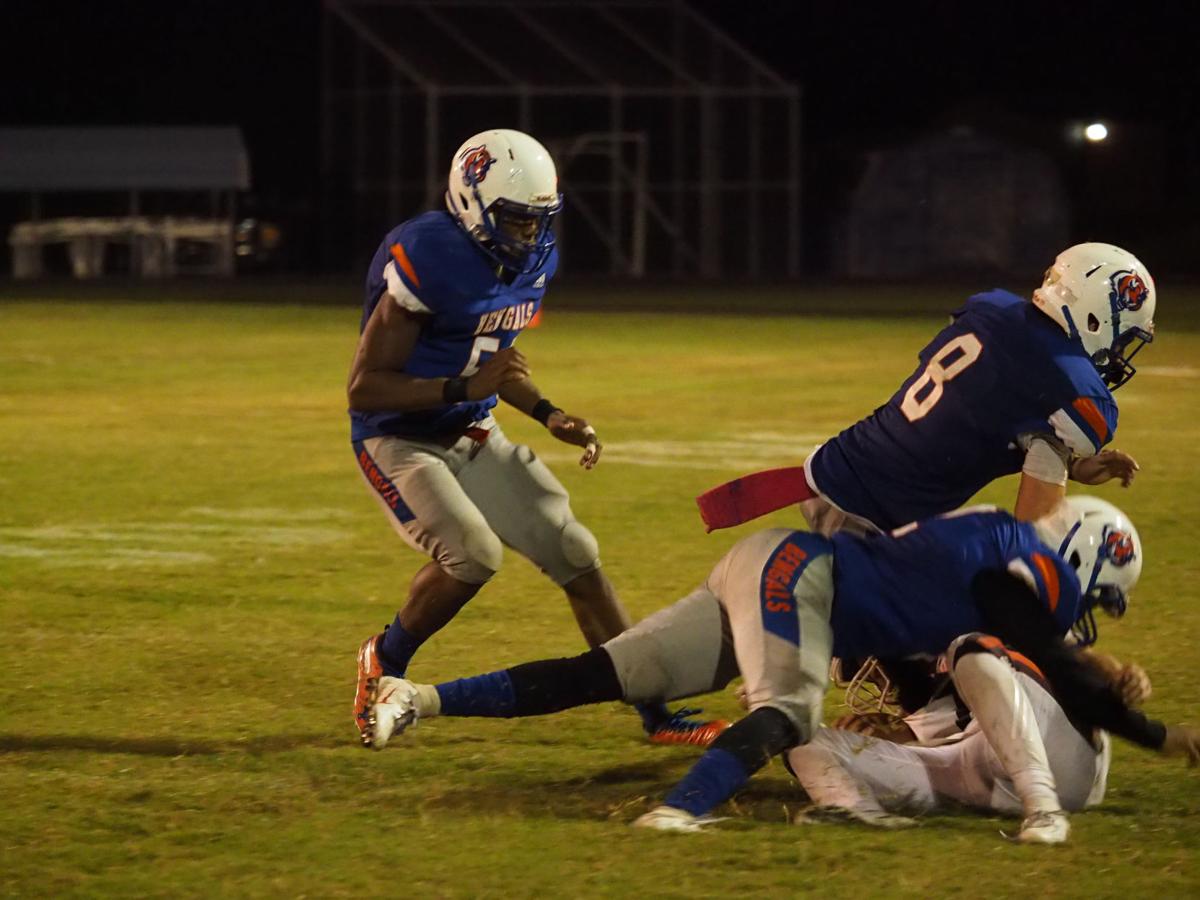 Bassett seniors Dominic Gill (54) and Kevon Smith (9) celebrate a play during a game earlier this season.

Bassett's football team listens to the national anthem before the start of a recent game.

Bassett senior Austin McDaniel makes a sack during a game this season.

Three years ago, when Brandon Johnson took over as head coach of Bassett's football team, the former Bengal knew a rebuild of the program had to start with the defense. Playing fast and getting to the football was the way to set the tone of a game and create a brand of play.

The Bengals had talented upperclassmen at the time, but Johnson saw a group of sophomores that could help change and create a new mentality among the Bassett players and fans.

Now those sophomores are seniors, and have helped the Bengals to their best record since 2008 and a first trip to the playoffs since 2012.

“They've been with me every offseason,” Johnson said. “This is probably one of the most athletic classes I think this school has seen in a while. At times it hasn't always been easy for these guys. They could have easily quit, transferred, left... Like, 'Man this coach doesn't know what he's doing. We've got the same record.' But I think they felt the culture shift.”

The first season on varsity was definitely not easy for the sophomores: Dominic Gill, Kevon Smith, Dylan Hairfield, Austin McDaniel, Jaylen Martin, and Shyhee Preston. Not only were there adjustments to the faster game and bigger players, but the group also needed to adjust to playing alongside one another.

The Bengals finished 1-9 that season.

“We were all new to it. Kevon had been there but everybody else was kind of new to the whole atmosphere,” McDaniel said. “I think us having each other's backs through it all it kind of helped us out a lot.”

“We've got that chemistry. It's kind of built up over the years,” Smith said. “We've grown in a lot of ways. Even in confidence. Confidence helps a lot.”

Smith is the only player in the group who consistently plays both offense and defense, though others will get their chances on offense at times.

That's by design. When Johnson started at Bassett, he knew he wanted something different. He needed coachable players who would be O.K. with focusing solely on the defensive side of the ball, and take the time to learn different fronts and secondary coverages and be ready to change mid-game.

He didn't want to put limitations on what his players could do, and his young players appreciated that trust.

“A lot of coaches I feel put limitations on their kids. We don't,” Johnson said. “Once they prove they've got one thing, hey here's another. Because I want all these guys to go play at the next level and that's next level... And they're able to grasp the concept because they're all smart kids and good football players and they just fly.”

Coming into the 2019 season, the group of seniors knew the game, but there was still one final step they needed to take to reach the next level. After losing a lot of senior leadership from last year's squad, it was important to have new captains take on that role.

Johnson said the summer and first two weeks of the season were “rough,” but his defensive core again stepped up and out of their comfort zones, and took the team under their wings. The group wasn't always tight knit, but they became a family, and the younger players followed suit.

The most important part of their leadership is the fact that the players lead by example.

“We can take our mistakes,” Smith said. “Instead of staying on it and letting it hold us down we can get past it and just come back and try to get better.”

“I think we all trust each other and we know everyone is going to do their job 100 percent of the time with 100 percent effort,” McDaniel said. “We're not afraid to hold each other accountable. We don't need Johnson to be the one to yell at somebody.”

The biggest indicator of a change in the Bassett program came in Friday's win over Magna Vista, a come-from-behind 16-12 victory in which the Bengals trailed by a touchdown with less than five minutes to play.

Johnson said Bassett teams in recent years would have folded when the team went down 12-10 late. “It would have been a wrap,” he said.

But Johnson told his defense they needed one turnover, and the Bengals delivered on the first play of the next drive to set up the game-winning score.

“All of our big games have been defensive games,” Preston said.

“We've got to be a lot more focused,” Gill said.

“They say defense wins championships and it definitely does,” Hairfield said.

While serving as an assistant coach at Magna Vista before coming to Bassett, one thing Johnson noticed was how much young football players in Ridgeway want to one day become Warriors, and how much playing with the Magna Vista name on the front of their jersey means. That was something else he wanted to bring back to Bassett.

Johnson has seen how much his players have elevated the Bassett name. He's had mothers of players tell him stories of young athletes who are looking up to this current crop of Bengals. Even last Friday's senior night was just as much about celebrating those players getting ready to leave the program as it was about getting youth football players excited about the future.

“That's all we're trying to do is get these kids to play hard, have a brand of football that the young kids say, 'Man, that looks fun,' and we're starting to see that now,” Johnson said.

When young football players see this year's Bengals, they'll see players who know how to battle adversity, work well under pressure, and most importantly work together and for one another. This year's seniors helped pave that way.

“I feel like it's more of a team. (Three years ago) we were playing for ourselves, we weren't playing for Bassett as a whole,” Martin said. “It's more like a family thing.”

“They all have built this foundation for this group to keep building upon, and our foundation is pretty strong right now,” Johnson said. “It's been a good group. It's been a really good group. I'm glad they get to taste the playoffs. My first as a head coach, their first as players. I told them, man let's don't stop. Let's keep playing.”

Bassett will travel to Magna Vista on Friday for the first round of the Region 3D playoffs.