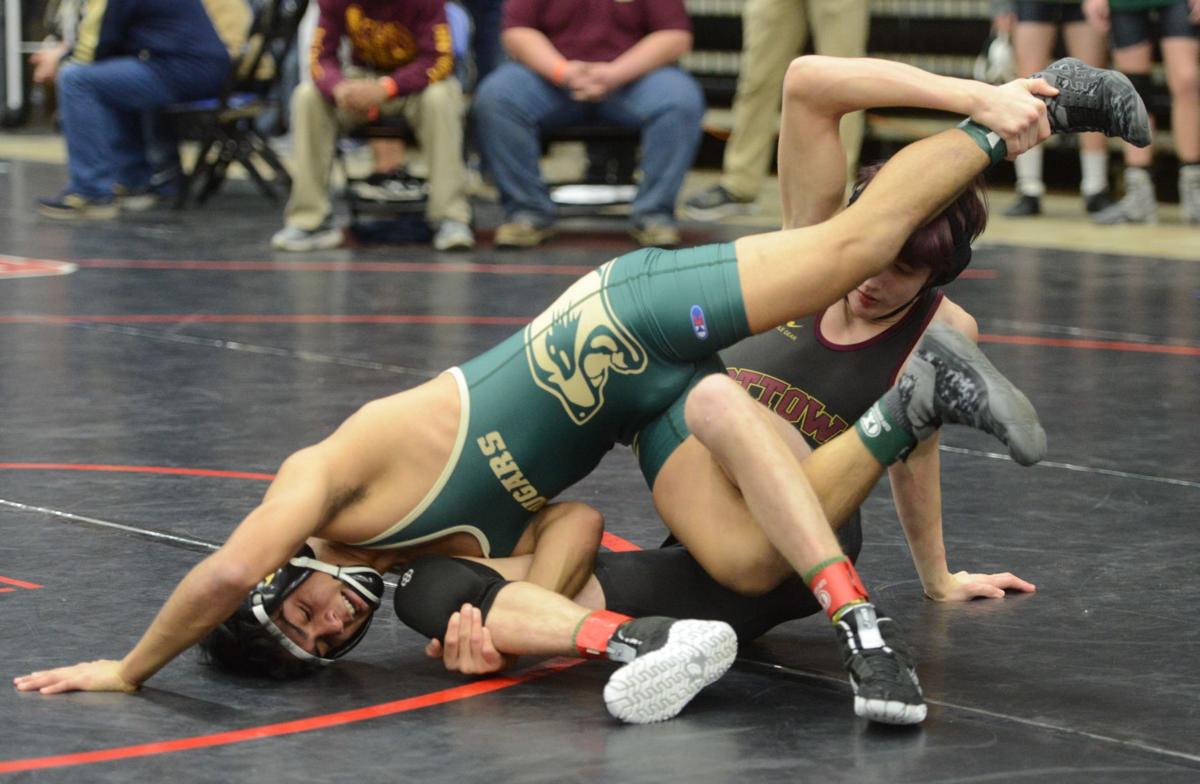 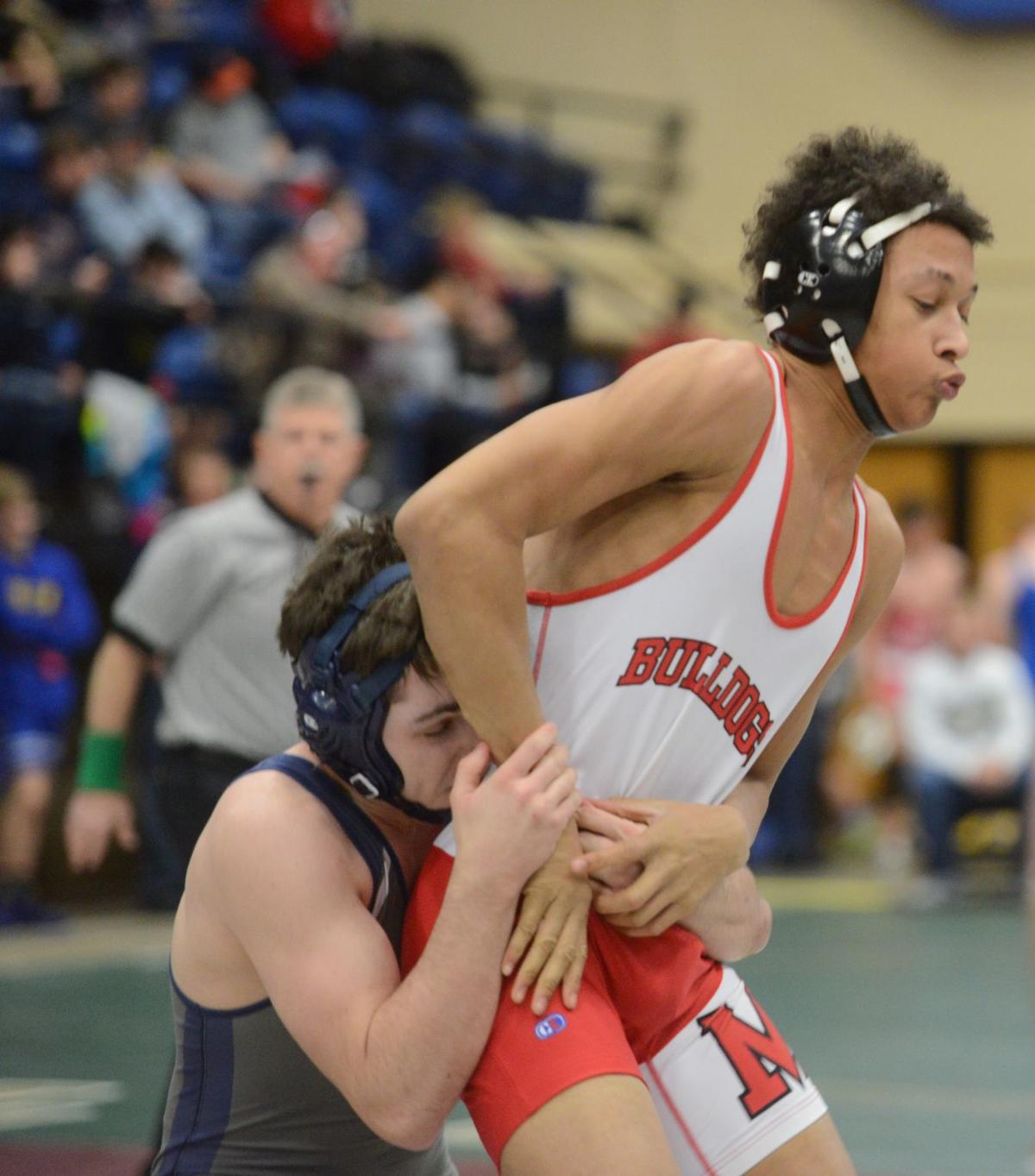 Martinsville sophomore Jamier Manns (right) wrestles at 152 pounds against Gage Matney of Richlands on Friday at the Salem Civic Center. 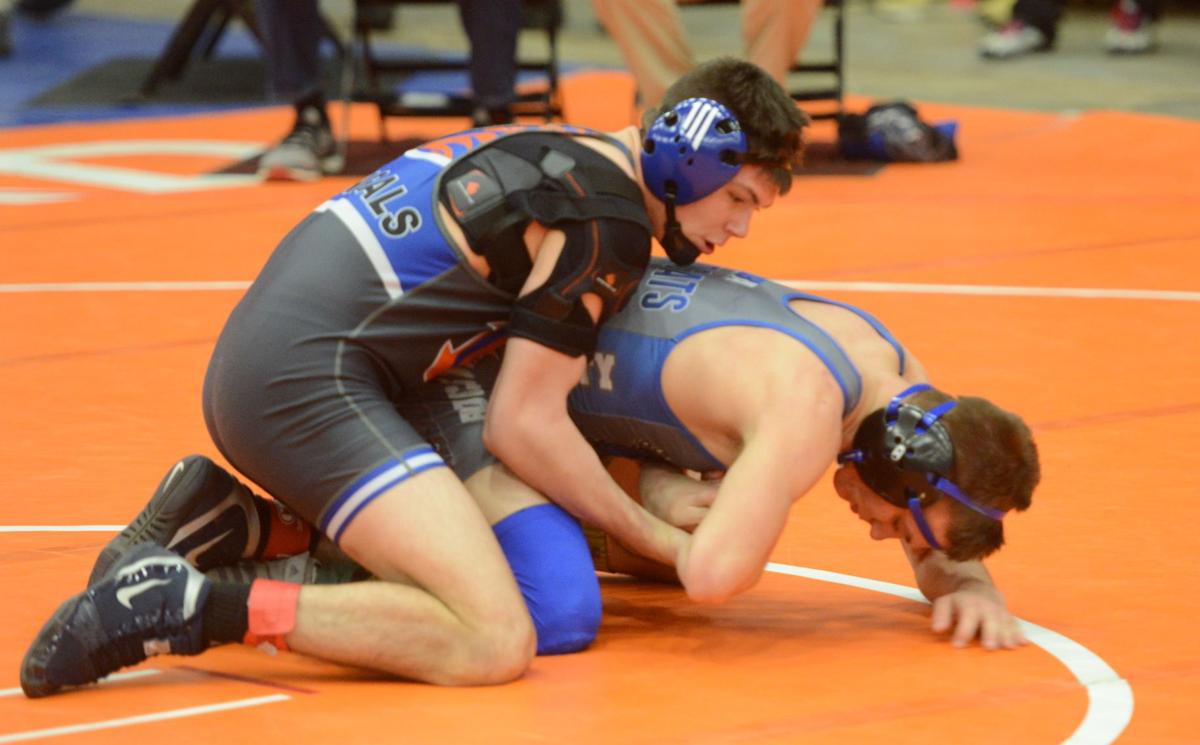 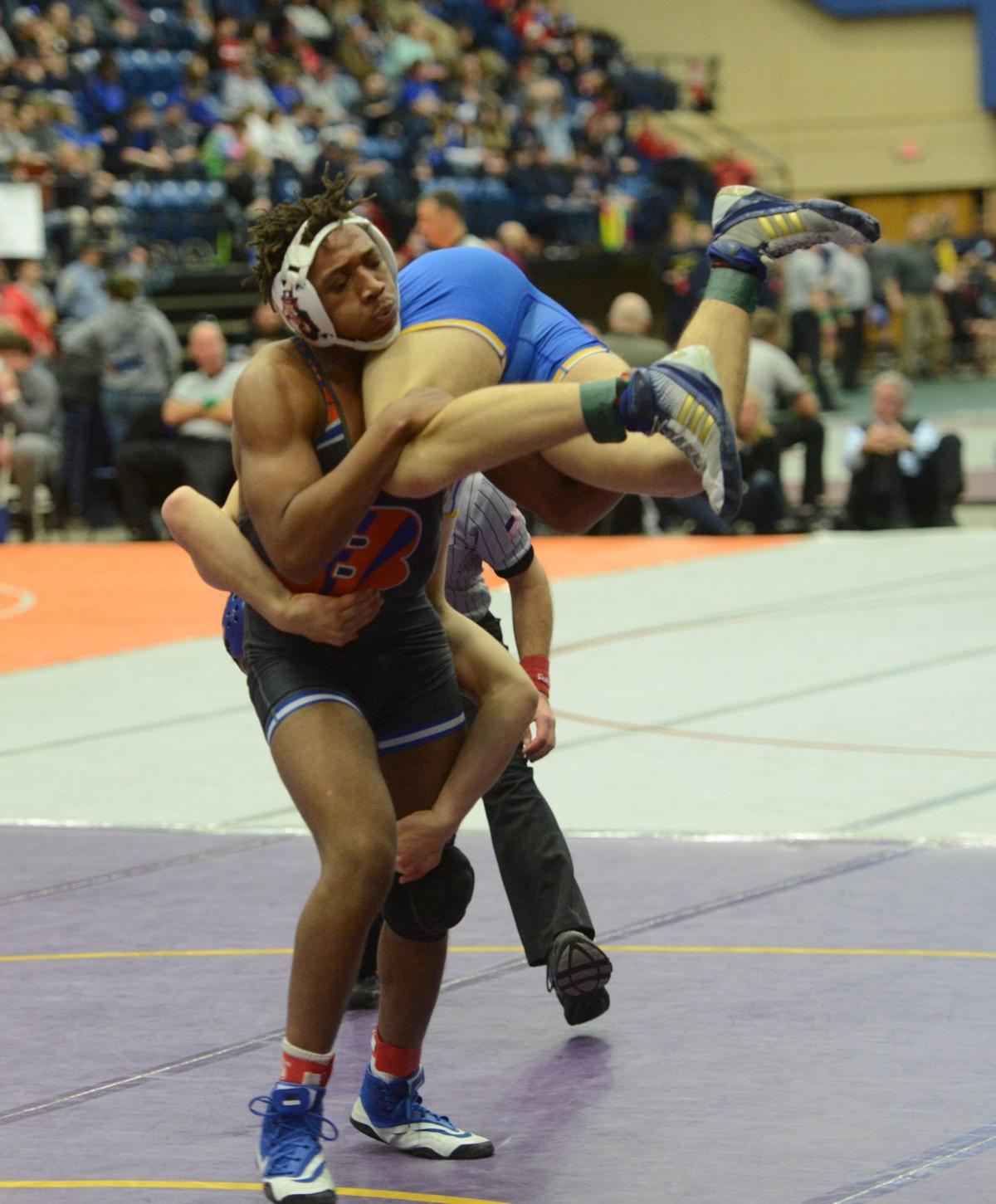 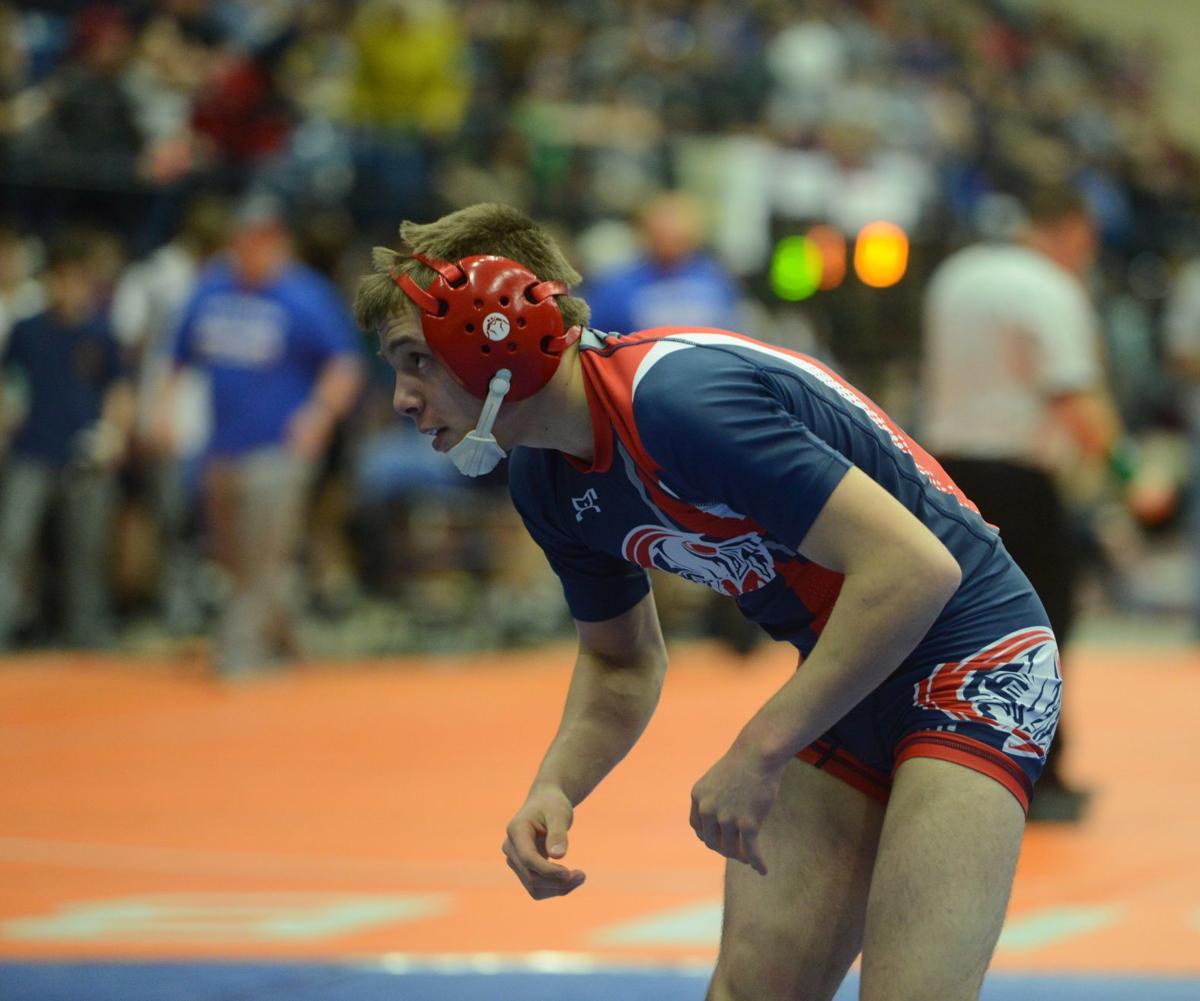 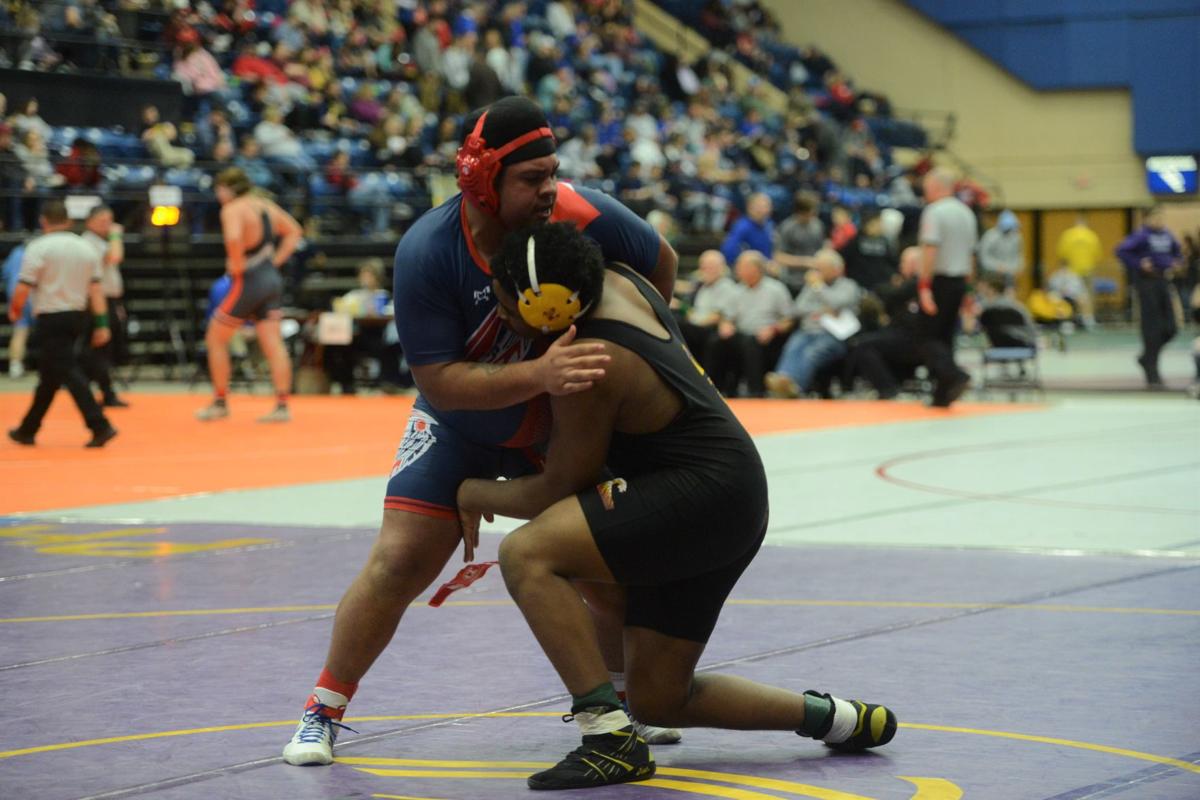 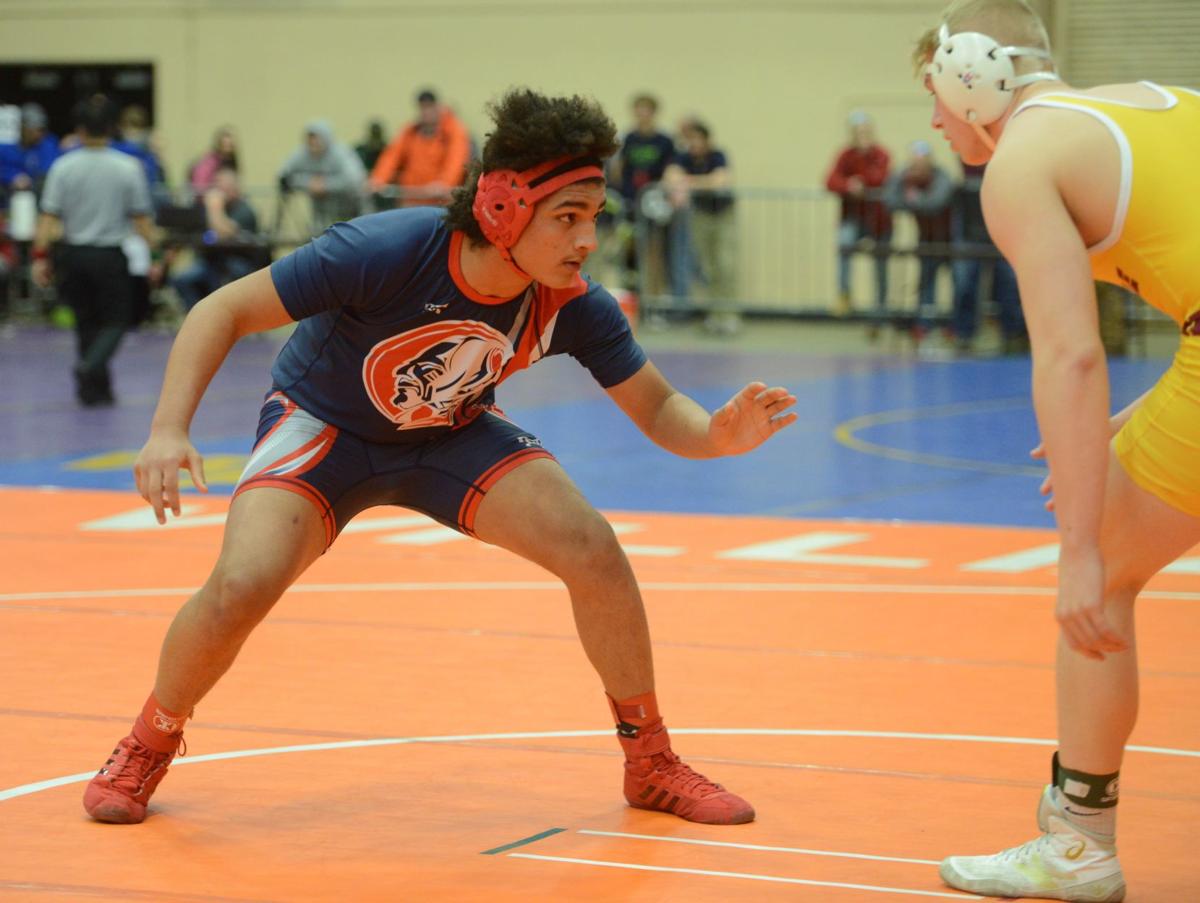 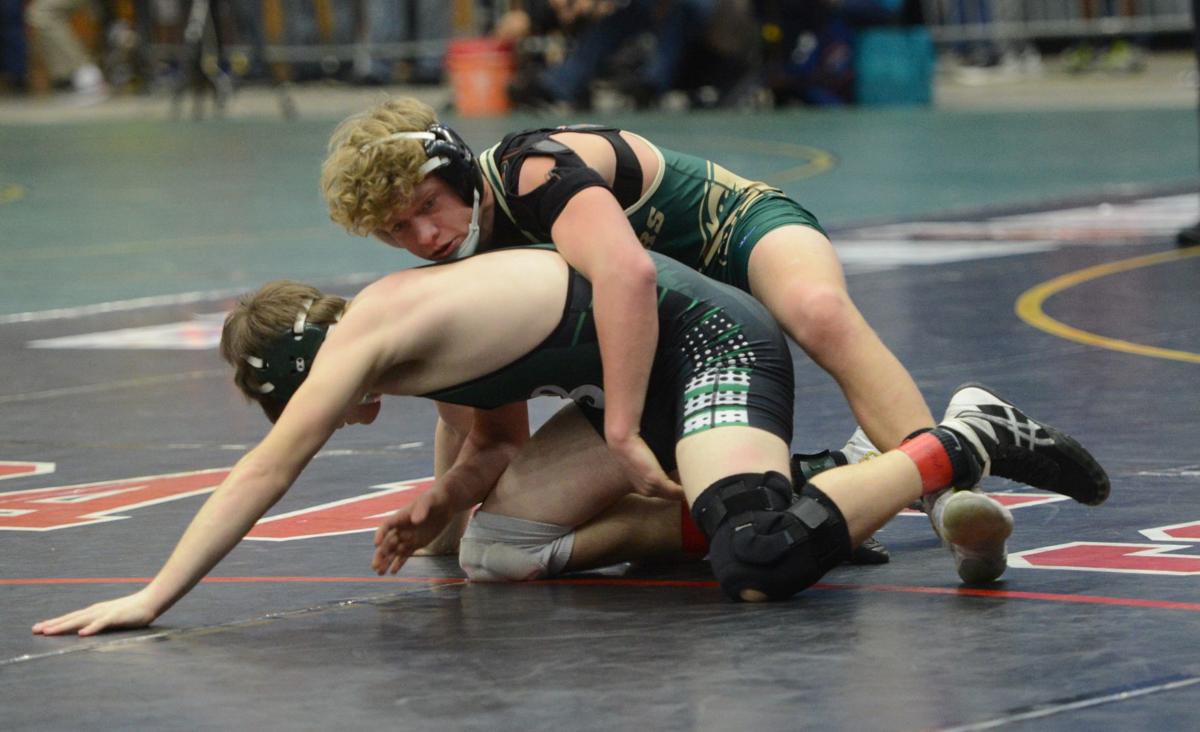 Martinsville sophomore Jamier Manns (right) wrestles at 152 pounds against Gage Matney of Richlands on Friday at the Salem Civic Center.

SALEM—Patrick County senior wrestler Alfredo Gutierrez won both of his matches on Friday at the VHSL Class 2 Wrestling State Championships at the Salem Civic Center to advance to Saturday’s semifinals.

Gutierrez fought back from early deficits in both of his matches at 120 pounds to earn a pair of falls—first over Nottoway’s Austin Williams in 5:34 and later over Staunton’s Khalil Crawford in 5:49.

“He wrestles hard for six minutes, that’s always Alfredo,” Cougars head coach Tim Lawson said. “I’m confident every time he gets on the mat that he’s going to give us his all the whole time he’s out there.”

Three Patrick County teammates also advanced past the opening round Friday but had mixed results thereafter.

Juniors Owen Smith and Darious Williams tallied pins in their opening matches at 132 and 145 pounds, respectively, while classmate Trey Robertson advanced at 138 pounds due to a forfeit.

Smith pinned Jacob Dolin of Graham in 1:49, and Williams defeated Dawson Peck of John Battle in 2:55.

In the quarterfinals, though, Williams and Smith lost by decision and Robertson lost by technical fall.

Smith bounced back with a win by fall in 4:56 over Zechariah Shutt of Staunton in the second consolation round, and he ended his day with a pin in 3:00 against Arcadia's Osberto Perez to advance to Saturday.

Robertson saw his season come to an end following a 6-5 decision loss to Dylan Ross of Nandua in the second consolation round.

Elsewhere in Class 2, Jamier Manns, Martinsville’s lone representative, was pinned in the second period by Gage Matney of Richlands in the first round at 152 pounds. After receiving a bye to the second consolation round, the Bulldogs sophomore saw his season end with a 10-3 decision against Deandre Louis-Jean of John Marshall.

In Class 3 action, Magna Vista brothers Zayvion and Nick Estes both advanced to the quarterfinals of their respective weights. Zayvion won by forfeit at 195 pounds, and Nick won by fall at heavyweight over Jalin Beasley of Petersburg.

In the quarters, though, both were pinned, sending them to the wrestlebacks. Nick lost to Jessie Knight of Turner Ashby, and Zayvion lost to Brookville’s Isaac Dolph, who entered the match undefeated this year. In the second consolation round, they both recorded wins by fall—Zayvion in 4:29 against Connor Ellison of Lafayette and Nick in 2:08 against Tony Bitter of Warren County.

The brothers saw their seasons end in the third consolation round, though, as both suffered losses by fall. Zayvion went down in 2:31 to Michael Smith of Waynesboro, and Nick lost in 3:17 to Tyler Nix of Brentsville District.

Both bounced back with wins in the first consolation round, though. Dickenson defeated Spotswood’s Josh Hartman by fall in 2:56, and Duarte won by fall in 3:53 against Messiah Pearson of B.T. Washington. But they both suffered losses in the second consolation round—Dickenson by 9-2 decision to Jacob Seale of York and Duarte by 15-2 major decision to Skyline’s Brandon Ahlemann.

Bassett senior teammates Zach Oakes and Shyhee Preston lost in the first round at 145 and 182 pounds, respectively. Oakes lost a 3-0 decision to Nicholas Marando of Rockbridge. Preston was tied 4-4 with Jordin Lennon of York after the first period, but Lennon took control in the middle period and ultimately claimed an 11-5 decision.

Oakes saw his day end with an 8-0 major decision loss to York’s David Reid in the consolation round, but Preston extended his state meet a little longer.

Preston won a 13-6 decision against Max Morrison of Western Albermarle in the first consolation round, but he bowed out in the next round with a 7-5 loss to Hayes Tomlin of Rockbridge.

The VHSL Class 1, 2 and 3 wrestling tournaments resume at 10 a.m. Saturday and will conclude in the evening.