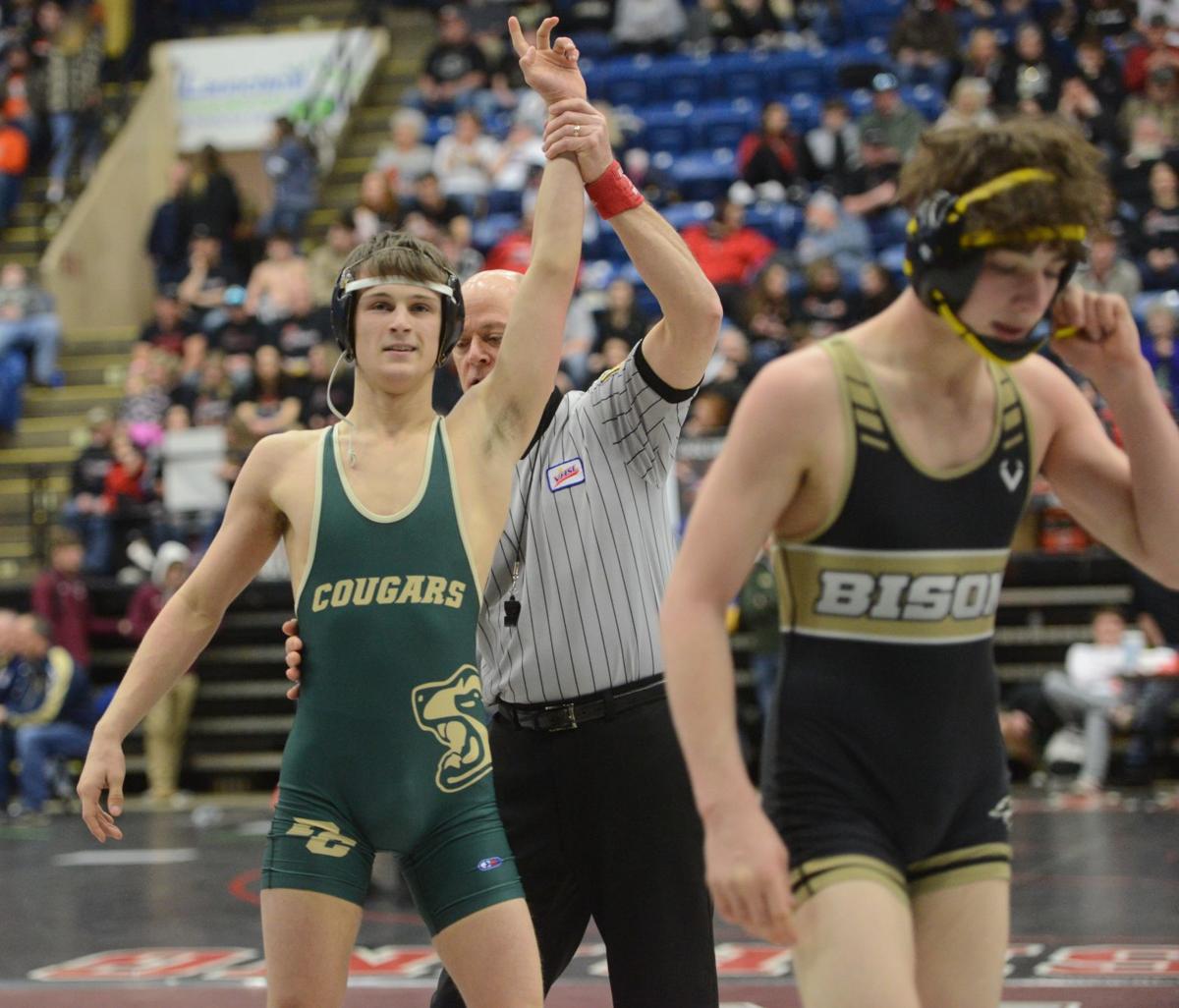 Patrick County junior Owen Smith has his hand raised after winning in the VHSL Class 2 132-pound consolation semifinals against Jeffery Hildebrand of Buffalo Gap on Saturday at the Salem Civic Center. Smith won by fall in 2:19. 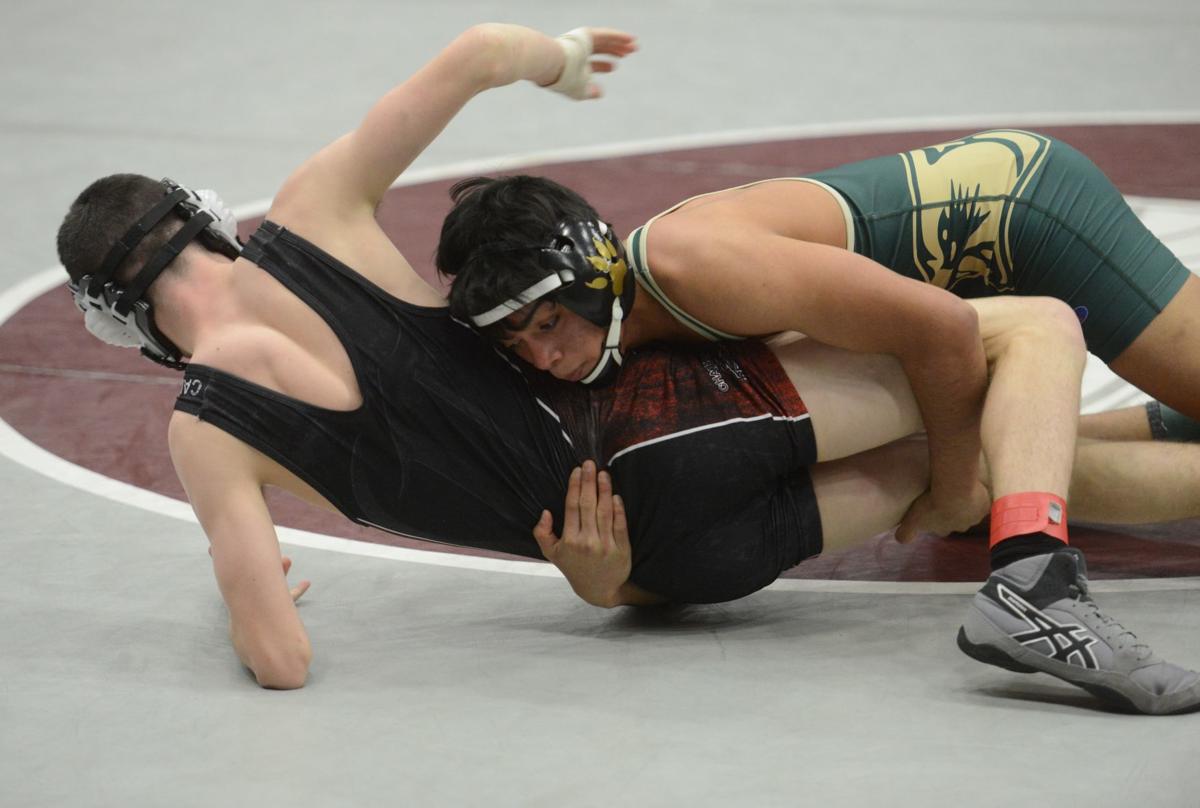 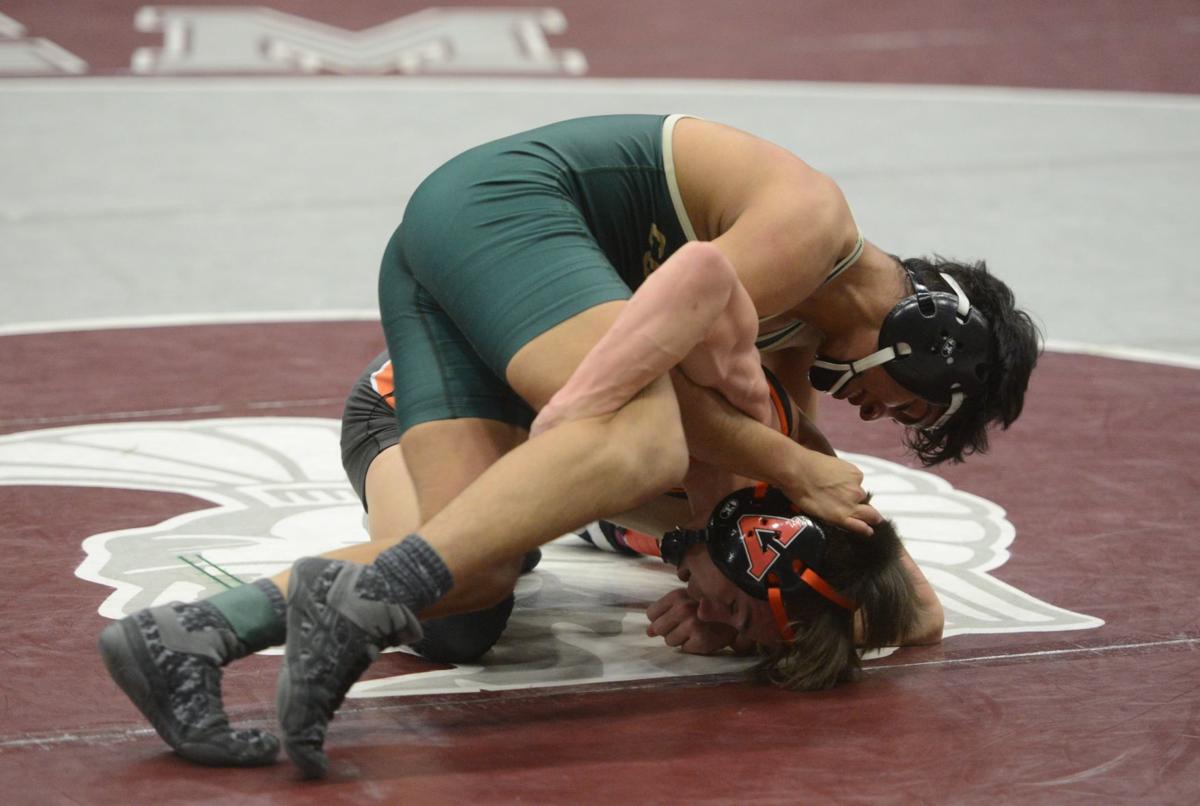 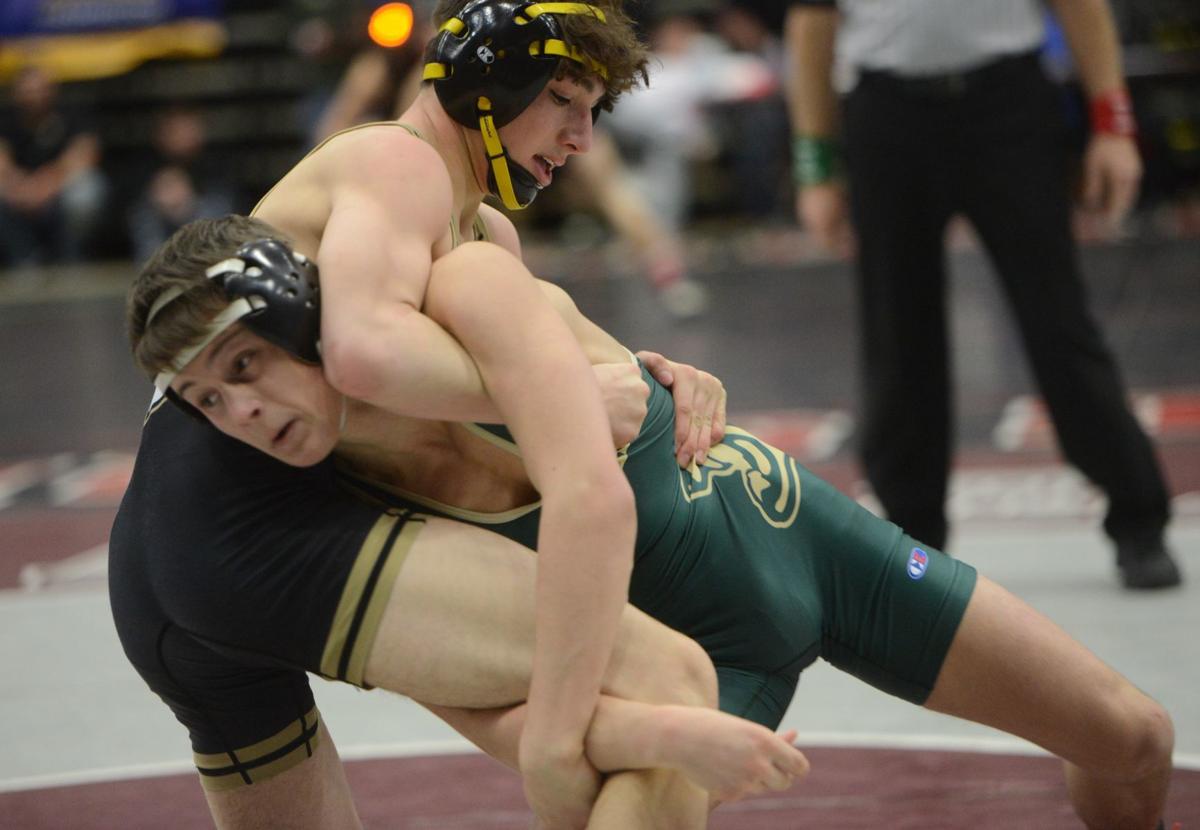 Patrick County junior Owen Smith has his hand raised after winning in the VHSL Class 2 132-pound consolation semifinals against Jeffery Hildebrand of Buffalo Gap on Saturday at the Salem Civic Center. Smith won by fall in 2:19.

Smith, a junior, used three pins in the consolation rounds to earn his way to the third-place match at 132 pounds, where he lost by fall to Trevor Wiggins of Poquoson in 2:50. Gutierrez, a senior, lost his third-place match by 4-3 decision against Jake Cline of Glenvar.

“It’s been a while, I’m not sure, since Patrick County’s had somebody place,” Lawson said. “By them doing that, they set the bar for other people to reach.”

After losing in the quarterfinals on Friday afternoon, Smith responded by picking up falls against Zechariah Shutt of Staunton, Osberto Perez of Arcadia and Jeffery Hildebrand of Buffalo Gap on the consolation side of the bracket to salvage his stay at the state tournament.

Smith got the best of Shutt and Perez on Friday evening, and he took care of Hildebrand Saturday afternoon to advance. He had built a 4-0 lead midway through the second period before registering the fall.

In the third-place match, Smith trailed Wiggins 7-1 in the second period before ultimately being pinned.

On this stage, Smith said it is difficult to lose and attempt to mentally reset in preparation for another match.

“It’s really tough. You’re in your head, thinking you’re not good enough,” he said. “It hurts, it really hurts sometimes.”

But in his second visit to state, he accomplished his goal of being in the top six and making it onto the podium. After being one match away from placing as a sophomore, Smith is proud of his growth.

“It feels amazing just to be on the podium,” he said. “Even though I lost, it still feels amazing because I’m still top four in the entire state.”

Gutierrez picked up two falls on Friday to advance to Saturday’s semifinals at 120 pounds, but he lost an 8-4 decision against Hunter Morell, a senior from Virginia High School in Bristol.

“Today I was really focused on my first match,” he said. “It didn’t go as I thought it would, but I tried.”

Gutierrez ceded a takedown in the first period, and Morell kept him on the mat for the rest of the opening two minutes. Morell tallied a takedown and a three-point nearfall in the second period, coming close to pinning Gutierrez in the final seconds.

Gutierrez entered the third period trailing 7-0 but recorded a takedown to get on the board. Gutierrez later had Morell on the fringes of a nearfall but was not rewarded with any points. Morell earned an escape to make it 8-2, and Gutierrez added a takedown to account for the final 8-4 margin of the decision.

Gutierrez bounced back to beat Chatham junior Gabe Medlin and reach the third-place match against Cline, a freshman.

Against Medlin, Gutierrez built a 7-1 lead by the middle of the third period courtesy of two takedowns and a three-point nearfall. Medlin earned an escape for his only point, and Gutierrez added one more takedown to finish with a 9-1 major decision victory.

In the third-place match, Cline outlasted Gutierrez and held on for the one-point victory.

“It sucks, but I have to keep my head up, suck it up and move on,” Gutierrez said.

It was his third visit to the state meet, however, and he placed for the first time ever. As a junior 113-pounder, Gutierrez went 2-2 at state. The year before, at 106 pounds, he lost his first two matches.

“That was just my goal at the beginning of this year, just to place,” Gutierrez said.

Lawson said he was proud of all that his two state placers had accomplished. Gutierrez finished the year with a 44-10 record, while Smith finished 45-9.

“They finished up the season hard. They set the tone, hopefully, to get better down the road,” Lawson said. “It’s OK to be disappointed for not getting where you wanted, but they worked hard at getting to where they finished.”