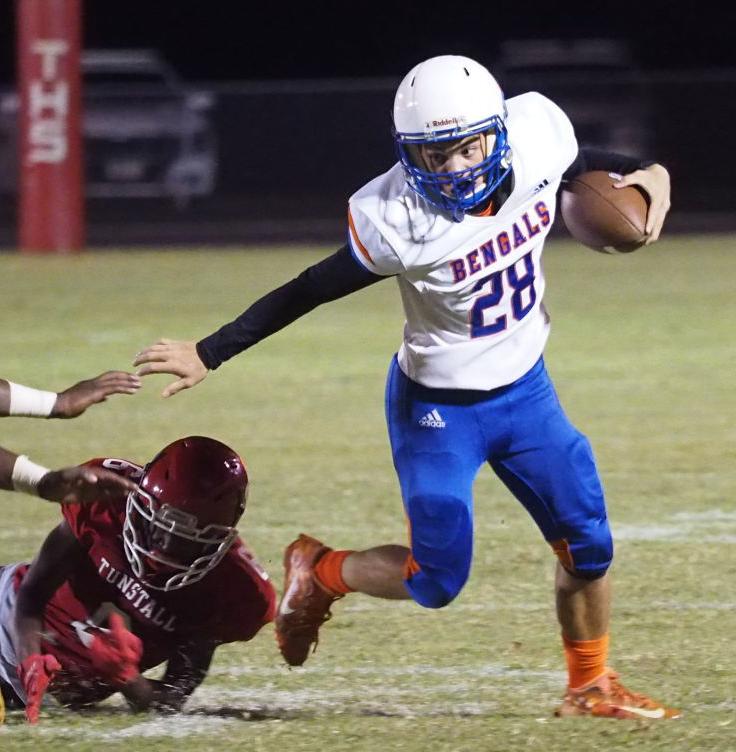 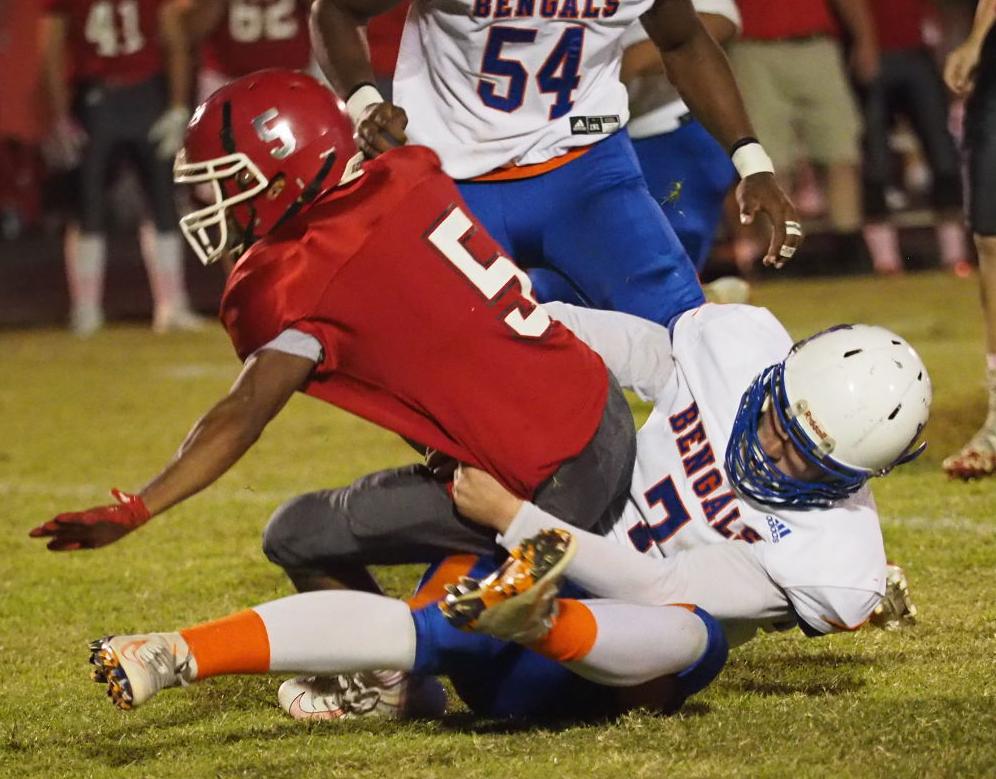 Bassett held a 27-6 lead late in the third quarter Friday night before the Trojans came storming back to cut the lead to 7 with five minutes to play. On the Trojans’ penultimate drive, the Bengals looked primed to put them away after Keshaun Valentine intercepted a pass by Tunstall quarterback Dylan Burnette in the redzone on fourth down. But Valentine’s return ended with him fumbling the ball on the 35-yard line. The Trojans recovered the fumble for a fresh set of downs against just outside of the redzone, forcing the Bassett defense to come up with another big stop.

“I believe we’re a ‘back against the wall’ defense,” McDaniel said. “I feel like we’re a team when we’re under pressure we’re able to work. It might have been an ugly second half but I think defense can really step up at times like that and I think we obviously did.”

A 15-yard penalty by Tunstall helped the Bengals’ cause on the final drive. They forced a second turnover on downs of the night for the eventual win.

It was the Trojans’ big play ability that got them back into the game in the second half. All three of Tunstall’s touchdowns came on passes of 53, 58, and 30 yards, all from Burnette to receiver Will Blackwell.

The final touchdown came with the Trojans facing fourth-and-5 wtih 5:38 to play. They then got the ball back on an onside kick.

“I tell them all the time when we lose focus or we lack discipline that’s a reflection on me the head coach,” said Bassett coach Brandon Johnson. “So I will always take the blame for that. We’ve just got to clean that up.

“It’s not youth. We’ve got a couple of seniors in the defensive backfield. We’ve got guys that have played plenty of games. It’s just a lack of focus ... and staying true to what we do, and we’ve got to be better at that.”

The Bengals took the lead right off the bat on a 12-yard run by Demetrius Gil early in the first quarter. After Tunstall tied the score at 6-6 two possessions later, Bassett again found the endzone midway through the second on a 4-yard run by Simeon Walker-Muse.

The next possession, freshman quarterback Ja’Ricous Hairston found freshman Elijah Stokes for a 24-yard touchdown to go up 20-6, a lead they would take into the half.

Bassett added another score on the first possession of the third quarter on a 7-yard run by Valentine.

The Bengals were scoreless for the final quarter, forcing the defense to step up.

Other notes from Friday’s game:

Bassett’s defense was flying around the field all night, with a combination of speed and power that got to the Trojans early. McDaniel had a tackle for a loss and a sack, and Shy Preston and Ty Cline also added sacks, while Kevon Smith added a tackle for loss.

Burnette was 12-for-22 passing for 235 yards. Blackwell finished the night with four catches for 133 yards. But while the Trojans found success in the air, the opposite can be said for their ground game. Bassett held Tunstall to -12 yards rushing, the second time this season they’ve held an opponent to less than 0 yards on the ground.

Kevon Smith has led Bassett in rushing yards all season, picking up all of the Bengals’ rushing touchdowns prior to Friday.

But two underclassmen running backs have emerged from junior varsity to establish themselves in the backfield for the Bengals, giving the team a stable of running backs to balance the offense.

Stokes led Bassett Friday with 70 yards rushing on six carries. He added 41 yards receiving on four catches with a touchdown.

Walker-Muse, a sophomore, had 69 yards rushing on 15 carries. He added a touchdown.

Smith had 52 yards rushing on 13 carries.

“It’s been great for us and they’re all are different,” Johnson said of his running backs. “Kevon brings that downhill power. Simeon is a little more shifty with some vision and Elijah is pretty fast. For a freshman and a sophomore to come in and we pull them off of J.V. to do what they’ve done, I’ve really been proud of those guys. And Kevon is always going to be that guy we go to and look to for those yards. I just feel like they all kind of balance each other out.”

Gil, who led Bassett in receiving yards this season prior to Friday, had 25 yards rushing on three carries with a touchdown.

After getting shut out in the first game and scoring just a single touchdown in the second, Friday night Bassett scored at least 23 points for the fourth time in the last five games.

Hairston threw a touchdown pass for the fifth straight week, bringing his season total to six.

“I feel more protected by my line because they’re getting more comfortable every week,” Hairston said.

Adding good offensive weapons around Hairston has added to his comfort in the pocket.

“That’s beautiful because when we get off the ball we know we’re at least getting three yard a pop,” he said.

Hairston: It just took us to realize that we’re not the team that we used to be and we work too hard for us to lose. And we’ve got to start putting in more work because that was way too close for us.

Johnson: I just saw their backs against the wall. We’ve got a lot going against us, how are we going to react to it? We didn’t do a good job in the third or in the middle part of the fourth reacting well to things that go against us but I think in the last stop right there it showed we’ve got to win this game. This is a game we should win, we felt good coming in and we even played a good two or three quarters and then just lost focus.

Hairston: We’ve got to do some more running first of all and we’ve got to make sure we start protecting the stuff we already have.

McDaniel: We call our defensive line ‘The Hot Boys’ because we believe we’re the fastest off the ball and we’re going to do whatever we can to apply pressure... we trust everybody so we know we can get quarterback pressure. That’s something we really focus on.

Next weekBassett (4-3) will go back on the road on Friday for a rivalry matchup at Martinsville (0-7). Game time is set for 7 p.m.