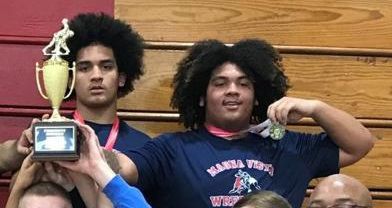 With two years difference between Magna Vista senior Nick Estes and sophomore Zayvion Estes, the brother haven’t had a chance to play any sports together since their youth football days.

They were separated on the football field starting in middle school, and again this year when Nick played varsity for the Warriors and Zayvion was on the JV team.

With this being Nick’s last year of school, he wanted one final chance to play a sport with his brother.

So he convinced the younger Estes to wrestle.

From the beginning the duo have been nearly inseparable both on and off the mat. Nick recalls an early match this season when the two wrestled at the exact time, and won within just a minute of one another.

“His match started before mine did and he was just working the kid. I think the kid was like a senior or something. He was just working him,” Nick said. “I was like, ‘Yea Zay! Let’s go, let’s go!’ And I’m not even paying attention and they’re calling my name saying, ‘Your match is starting right now!’ So I was like oh snap. So I run to the other side, I take all my stuff off, put my headgear on and I go.

“And I pin the dude before he finishes his match and I go out there and as soon as I do his match is over and Zay gets the win by points. I watched the end of it.

“I was so hype. We’ve got a video of it. I’m just sitting there screaming. After the match we sit there and we hug each other. That was an amazing moment, even before the final match. I’m going to remember that one for a long time. That one was fun.”

Nick has been wrestling for Magna Vista since he was a freshman, but as a heavyweight behind an older wrestler in the same weight class he was unable to compete in the postseason prior to this year, making this postseason run a first for both brothers.

The older Estes wanted his brother to give wrestling a try this year before Nick left for college in the fall. But it’s not easy to just start wrestling. Nick calls the sport the hardest one he’s ever competed in, and it’s certainly not for the weak-minded.

It took a while for Zayvion to get used to it.

“I don’t like when people hit me so at first I didn’t like it,” Zayvion said. “I didn’t want to do it anymore, but I saw that I was pretty good at it so I just kept doing it.”

Winning the PD title was big for the younger Estes, who called it a “big moment” given he hasn’t seen individual success in sports in his time in school.

Nick had to show his younger brother the ropes, and Warriors head coach Zeke Ca’Stle saw Zayvion’s determination to win, his aggressiveness, and athleticism, which made him a natural on the mat.

While they will often train and wrestle against one another in practice, it’s the mental and emotional support the brothers give each other that’s helped the most.

“Every time he would lose I’d be like, ‘Zay, It’s all right. You’re still better than them,’” Nick said. “We’d be in practice and we’d be working and Zay would be like, ‘I don’t want to wrestle him, I want to wrestle you because I know you’re going to make me work.’”

It was the support from each other as well as support from coaches and family that pushed both brothers this season.

“Nick and Coach Zeke (Ca’Stle). He’d asked me my ninth grade year, throughout that whole year like, ‘Are you going to wrestle? Are you going to wrestle? You should come wrestle.’ So I did it,” Zayvion said. “My coaches, they helped me… condition and stuff like that. Coach Randy (Dailey) helped me learn certain moves I didn’t know and I just got better at it as I went.”

“We were just constantly working, learning new stuff,” Nick said. “Coach Randy would help us out and Coach Hugo (Hughes), he’s like a second father to me. He’s always been looking out for me with football and everything. It was easy for us with all the support we had. We wouldn’t be here without them. And our family also, they’re very proud of us and they back us up with anything we do. My mom and my dad, they’re on our side 110 percent.”

Nick came into the season with high hopes of winning a state title in his final season, and has spent the last week since regions studying and watching video of his previous matches, figuring out what he can do better.

He’s seen room for improvement in himself, and is ready to go to states this weekend with winning on his mind.

Zayvion knows he has a few more years to compete at the highest level, but he’s used his brother’s work ethic as inspiration to go for a title himself.

If this season is any indication, whatever one Estes brother does, the other won’t be too far behind.

“All we wanted to do is get better, learn as much as we could in the short amount of time we had,” Nick said.

OTHER WARRIORS AT STATES:

Magna Vista will have four wrestlers competing at the VHSL Class 3 meet when it kicks off today in Salem.

The Warriors’ run at states is the culmination of a strong season in which the team of only 10 won the Piedmont District team championship.

“It was great. Overall it was great,” Ca’Stle said of the season. “We surprised a lot of people. We only had 10 wrestlers and you need 14 to make a team, and we’re beating teams that have full teams, so we wrestled really well. It was a good year. It was a great year. Great group of kids. Love them all. I don’t have any kids so they’re like my children.”

Cara Cooper is a sports writer for the Martinsville Bulletin. She can be reached at cara.cooper@martinsvillebulletin.com